Seven hares, six deer, one raccoon, one porcupine, one feral pig with an injured left front leg and innumerable winged creatures. That was last night’s critter count driving the roughly six miles home from a friend’s house.
Five squirrels and one opossum was the critter count for the roughly two hundred and sixty miles, I had driven earlier yesterday. To balance this uneven equation, those seven hours on the road had huge numbers of mechanical critters instead. Cars, trucks, buses and the occasional motorcycle for variety. There were also endless miles of construction and then some more detours, ‘closed shoulder’ sections, grooved pavements and diverted traffic lanes. And the delicious icing on the cake was the aftermath of early morning rain. I can never get enough of that blinding spray from deep puddles on the roadway when driving alongside an eighteen-wheeler on steroids. Exhilarating, don’t you think?

I was traveling back to the ranch after a couple of days in Garland, Texas, where we had a quiet family gathering in memory of my sister-in-law Felecia, who died a year ago. As is common for such occasions, tears and laughs mingled with hugs and hopes for the future of those left behind.

Naturally, whenever people congregate, there has to be food. My brother, Chef Charles, rolled up his sleeves and prepared some whole grain angel hair pasta for the gang.

And to think he used to be a chocolatier … 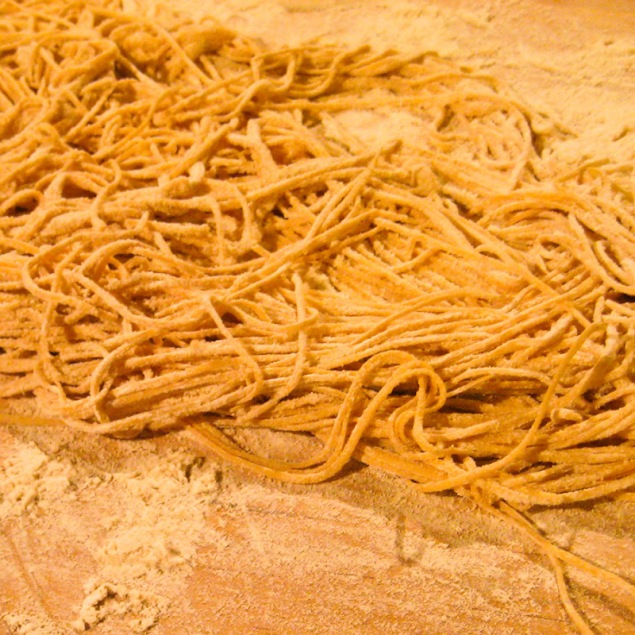 Charles had already cooked a ragu Bolognese earlier and made some weird, experimental Swiss chard pesto. A green salad was quickly assembled and parmigiano grated. Needless to say, the salivation processes had started all around.

One thought on “Hares Hopping”