Skip to content
Posted on October 21, 2012September 4, 2018 by CMKL
This post might grow into actual musing for once. I hope, it will become a reflection on my thoughts and emotions these past few days, since my mother died.
This is the last picture I took of my mother. I snapped it, as I was leaving to return to the US after a visit with her in Hamburg. She looks so small and lonely to me, standing there watching for my taxi, which would take me to the airport moments later. This image reminds me painfully of another goodbye, eighteen years earlier. Do you realize that replacing the ‘y’ in years with the letter next to it on the keyboard, you get tears? I just committed this symbolic typo.
When my father died eighteen years ago, our parents were living in a senior residence near Lübeck. My sisters were able to support our mother during the grim days following his death, while both my brother and I traveled from the US later for our Father’s sea burial. I stayed on for a while, trying to help my mother to sort out all that has to be sorted after a death. Prior to flying back home, I visited a few friends and spent my last night at a friend’s house near Frankfurt. I don’t remember the precise circumstances, but suddenly there was my mother, who had driven diagonally across Northern Germany, to see me once more before my departure.
She was profoundly unhappy with her comfortable senior living arrangements, which my father had specifically chosen for her, so she should be protected after his death, but which she could no longer tolerate, now that he was gone. My father was the Northerner, while she was a closet Bavarian with a great longing for the mountainous landscapes and charming dialect of her early childhood. On that night in Frankfurt, we had a lovely dinner together, especially sweet, because it was so unexpected. After dinner, as my friend and I drove off, I left my Mother standing in the dark doorway of her hotel, one hand raised high for a goodbye wave, forlorn and abandoned. That image of my newly widowed mother was so heartbreaking that it will stay with me forever, unlike so many other images I carelessly allowed to scatter in the wind. Our mother never returned to her retirement prison, escaping to Munich instead.

Mami had the soul of a nomad, seeking, not so much new places, as new comfort. She was never entirely still. A hand gently caressing a cat’s furry head, a fingertip unknowingly tracing the outline of a design, her thumb rubbing ever so lightly back and forth along the ridge of her other hand’s metacarpal. Her skin was tissue thin and prone to eczema. I remember a photograph from the mid-fifties, around New Year’s time, showing my parents all dressed up for a party. Mother is wearing an elegant dusky blue silk dress with a flared skirt and little cap sleeves. She’s perched on the armrest of our living room sofa, laughing happily. Yet from her hands to her armpits, she’s bandaged. She didn’t seem to mind, even wearing slim gold bangles over the white bandage. Later asthma became her main enemy and this desperate fight for breath caused her unquenchable unrest, as our father explained to us.

Another fog-shrouded day has dawned. It is completely silent as if we were far removed from all other living beings. We live suspended in a milky white bubble, only occasionally pierced by the sharp chuckle of a laughing falcon. In this cushioning external calm, which echoes, if only at this very moment, my internal equilibrium, I sit down to continue recording my thoughts.

I never had firm roots in a hometown or even simply a paternal homestead. Nevertheless, our family has always been close emotionally and we enjoyed sharing our experiences and adventures with each other. Since my parents and siblings have lived far apart from each other and especially from us for the last forty years, those familiar interactions have been restricted to visits, both virtual, in the form of letters, emails or Skype video calls and real-life vacations. Thus I have some precious recollections of my mother, when she came to visit or when we were traveling together.

Three of these trips with my mother, all of three of them road trips, hold special significance for me. The first one was a six-week journey through France, which came about during an especially troubled period in my parent’s lives. They had been living in Southern Germany for a number of years, but economic difficulties induced my father to look for better opportunities elsewhere. He found just what he had been searching for in Kiel. Back home to the North – for him. Not so for my mother. She struggled mightily against this move and consented only with measurable reluctance. There had been problems between my parents that exceeded the North-South issue, so while committed to working past this bump in their marital road, they truly needed a break from each other. Their house was sold, possessions packed, my father was already working in his new office, when my mother asked me to spend my semester break with her and my little brother traveling “until Pahpie (as we called our father) finds a place for us in Kiel”. An open-ended road trip through France, who could resist?

Our journey eventually led us to the discovery of Breizh, Brittany or la Bretagne, to this day one of my favorite spots on earth. Concarneau, Quimperlé, Carnac, La Baule, oysters, sandy beaches, evening strolls with romantic French guys … menhirs and dolmen, reminiscent of druids and Celtic burial rituals, low stone walls enclosing and subdividing fields, pastures with short legged cows. Nothing too tall can withstand the ever-present gusts from a stormy Atlantic ocean. Equally, there were some squalls and even tempests among us traveling companions. We were evenly matched as drivers and navigators, both enjoying the tasks and managing them well. I remember with pride, how my mother sovereignly handled rush hour traffic around the Arc de Triumph in central Paris with aplomb and gusto. Many a driver would have trembled with fear. No stress there!

But emotional stress often allowed her lesser virtues to rear their ugly heads. Impatience paired with indecisiveness and a tendency, almost a need, to quarrel. That never works very well in conjunction with the youthful righteousness of a daughter. Mami (as we called our mother) was shy about speaking French, relying on her children to speak for her. My brother, though fluent in French, was too young to interpret for her, so it was mostly me doing all the talking, so to speak. One day a language related misunderstanding exacerbated into a nasty shouting match between Mami and me, reducing me to hysterical tears. What a terrible mother I had, how irrational she was, oh, the injustice of it all, unbearable, surely. How sorry I felt for myself! Until I slowly came to the realization, the she-monster wasn’t just my mother. Sitting on a creaky stairway of our Auberge, angry tears streaming down my cheeks, eyelids swelling by the second, it dawned on me that this ‘Mami’ person had several additional identities. Firstly, her identity simply as a woman. All through this trip she had shown me her carefree personality, so knowledgeable in culture and the arts, eagerly drinking in the beauty of the countryside. Then she was a big sister to her two siblings and she was a daughter herself, a daughter very much shaped by her own mother’s extremely dominant personality. And most importantly, she was a wife, feeling railroaded and unhappy at this particular time. Had she not enjoyed every little morsel of last night’s dinner with great enthusiasm, only to succumb to a severe asthma attack at the mere thought of calling her husband in Kiel later on? So I did a little growing up on those stairs. I learned to be less judgmental and more compassionate. I began to realize then, that not everything revolves around me and my feelings. A process, I haven’t quite completed yet.

The second trip took us through New Mexico, where she showed me her independent and inquisitive personality. She had been to Taos a number of times in the years following my father’s death. Often staying with her sister-in-law on the outskirts of Taos for extended periods of time. One year, she rented an apartment on her own in town, where she developed friendships with locals and attended lectures and concerts. It was wonderful to see her so animated and fulfilled. She knew a lot about Pueblo pottery and we visited different centers and museum together. In Santa Fe, she bought me an old Navajo silver necklace, that had been pawned many generations ago. We also went to the newly opened Georgia O’Keefe museum, where I could show her a different side of this artist, I greatly admire. One beautiful, sunny day, we drove up the valley of the Rio Chama toward Abiquiu, where O’Keefe used to live. The Aspen flanking the river were alight with bright Fall colors and I’ll forever cherish the memory of us traveling together through this valley glowing in golden happiness.

And my third travel memory occurred on our last trip together. In 2008 we invited both my mother and one of my sisters to come along with me on a house hunting trip to the SW of France. Back to France, where pretty much every family member had spent individual time or family vacations. I worked twice in French oceanographic labs, once in Roscoff in Breizh and a brief stint in a lab in Villefranche-sur-Mer on the Côte d’Azur, where my parents had also enjoyed a lot of time together. The Mediterranean coast with its treasures of fish, coquilles St. Jacques, shrimp, herbs and olives has always been a family favorite. On the day in question, we were cruising further West of the Rhône delta, in a small fishing harbor in Herault, near another little town, Marseillan, my parents had previously visited. The three of us were enjoying a seafood lunch on a restaurant terrace overlooking the sea, listening to the waves’ rhythmic splash on the coarse beach sand, when Mami remarked quietly: ‘I didn’t think, I’d get another chance to experience this’. Her words put a silly little smile on my face and I was so glad, she had decided to come along, even though it was already quite difficult for her to get around.

Her life has come to an end now. Despite her illnesses a long and full and multifaceted life. We will always miss her, as we are missing both our unique parents very much. My sister Bianka created this collage from the last picture taken of our mother. Afterward, she wouldn’t allow any more photos. 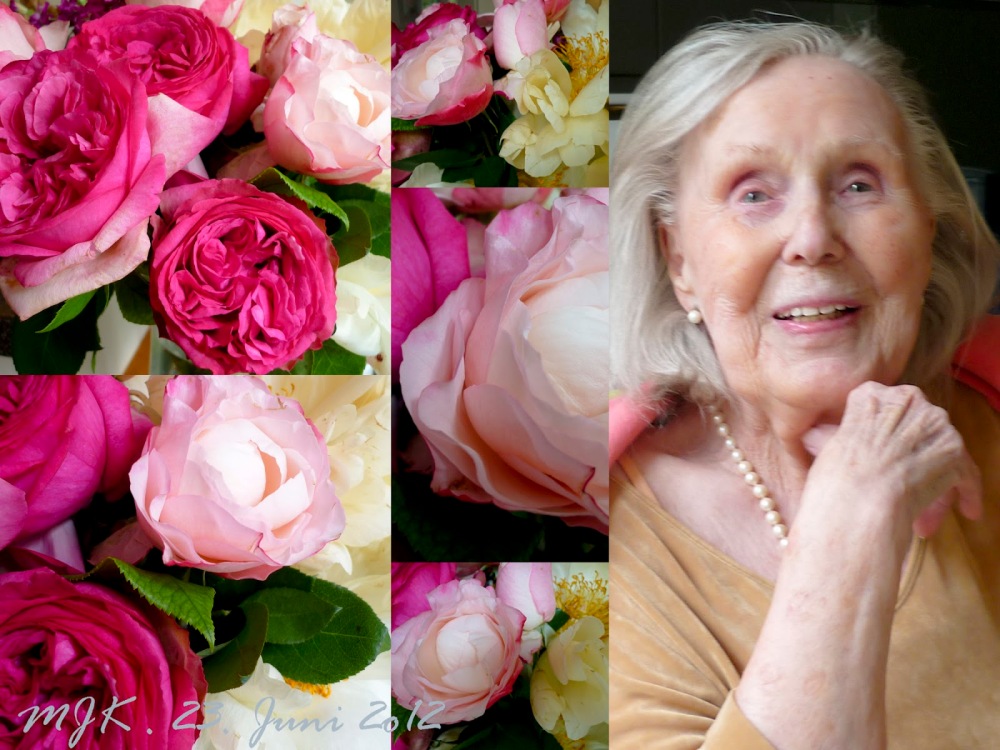 8 thoughts on “Remembering My Mother”