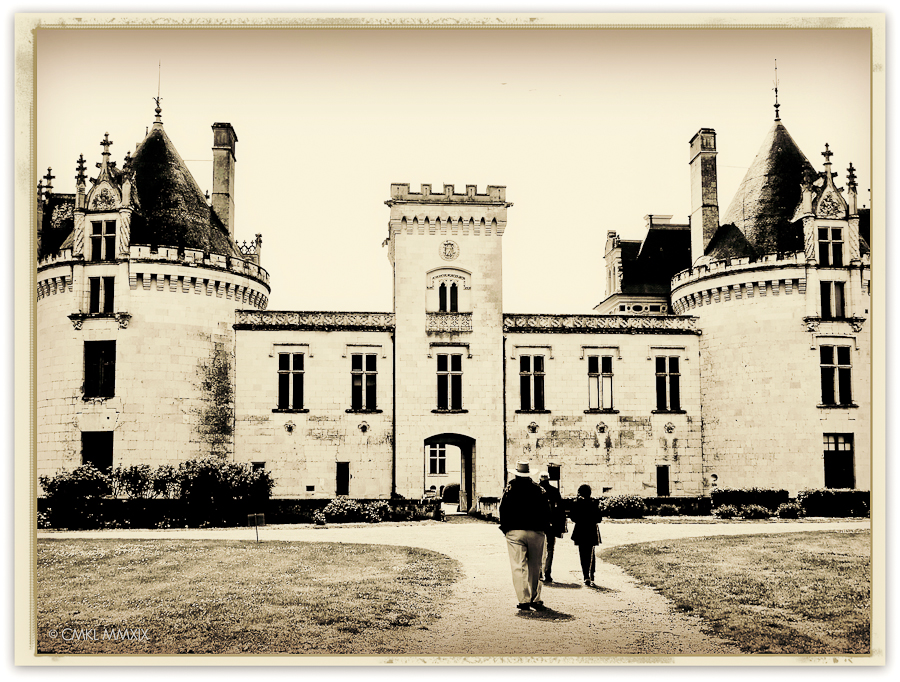 Another day, another castle! There we are, energetically approaching the unique castle of Brézé the wonders of which I shall reveal to you today. If the round towers, indeed the entire front of the castle, appear somewhat squat to you, your instincts are correct. 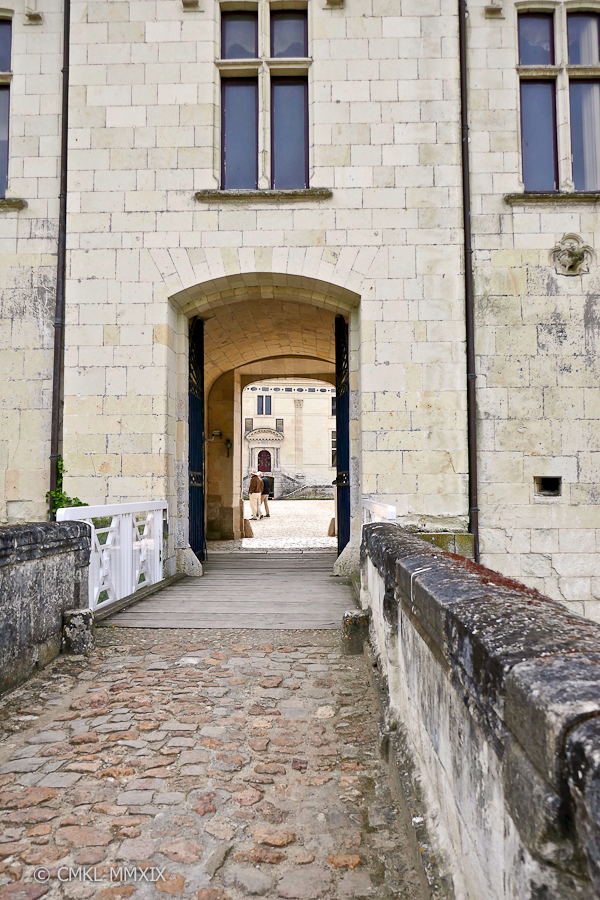 Before crossing the bridge and walking into the Cour d’Honneur, it is important to look down into the dry moat to realize its depth and width. Doing so, also reveals a multi-story foundation, easily doubling the overall height of the castle.

With a depth of 18 meters or 60 feet, this is Europe’s deepest dry moat, with emphasis on “dry”. Aside from the fact that owing to the local fluvial paucity, it would be difficult to flood this moat in the first place, it would, in fact, have been catastrophic to do so. Why? We shall find out shortly. Let’s first enter the courtyard of honor, where in former times guests were welcomed by the resident family.

The surprise waiting for visitors to the castle of Brézé is the astounding fact that what you see is only a fraction of what you get to discover. Since well before the 11th-century the most important parts of the castle have been underground, both beneath the visible castle itself and dug into the surrounding tufa limestone through the outside walls of the surrounding dry moat. I stole the following screenshot from a website that I can’t find anymore, therefore I can’t credit anyone. But I’m using it nevertheless to demonstrate the many layers of activities and alternate habitations below the castle of Brézé. The drawing shows quite clearly, I believe, how adding water to the moat would have flooded the subterranean dwellings rendering their purposes obsolete.

Without delay, we entered the main tunnel connecting the courtyard with the moat. 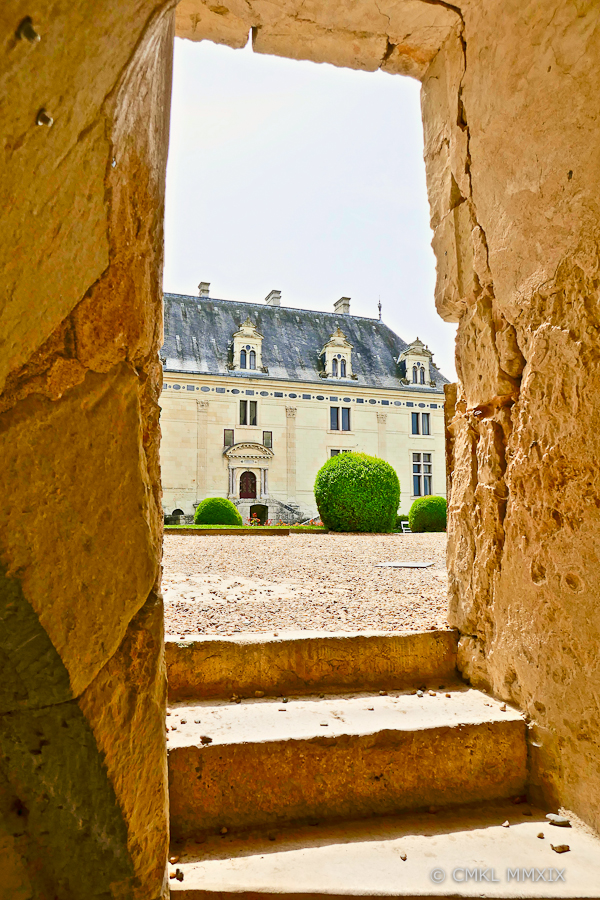 Looking back one last time toward daylight … 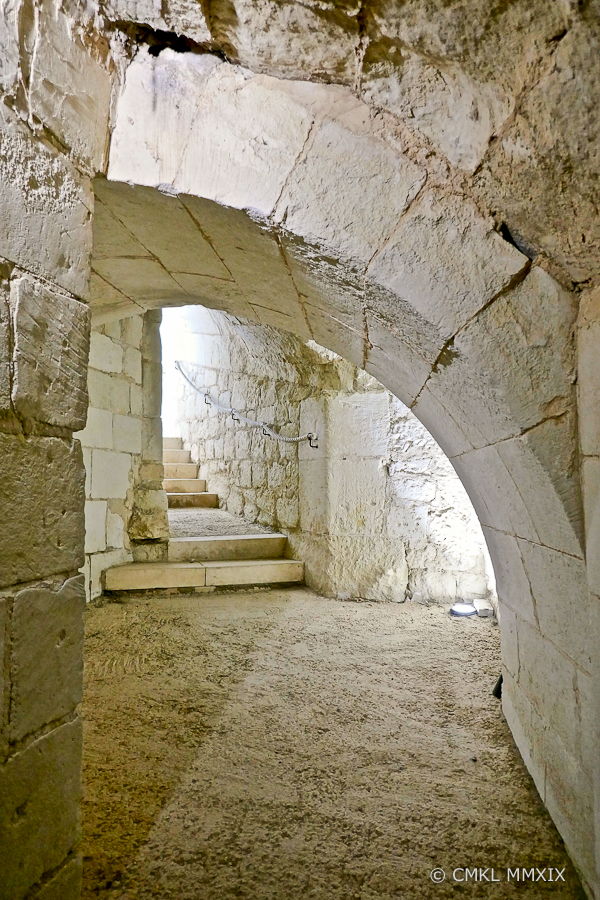 before descending further into the steeply pitched Grande Galerie. 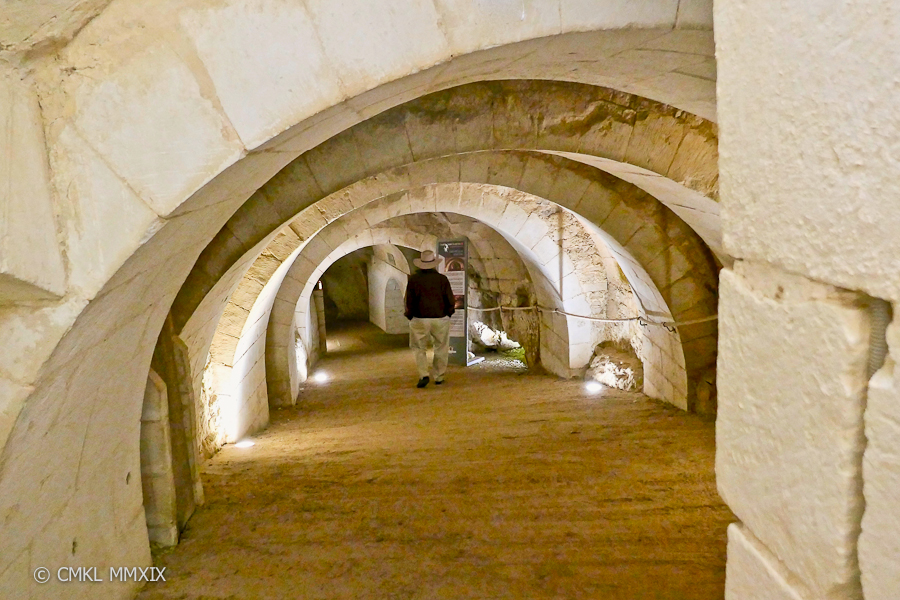 It was an eerie experience! 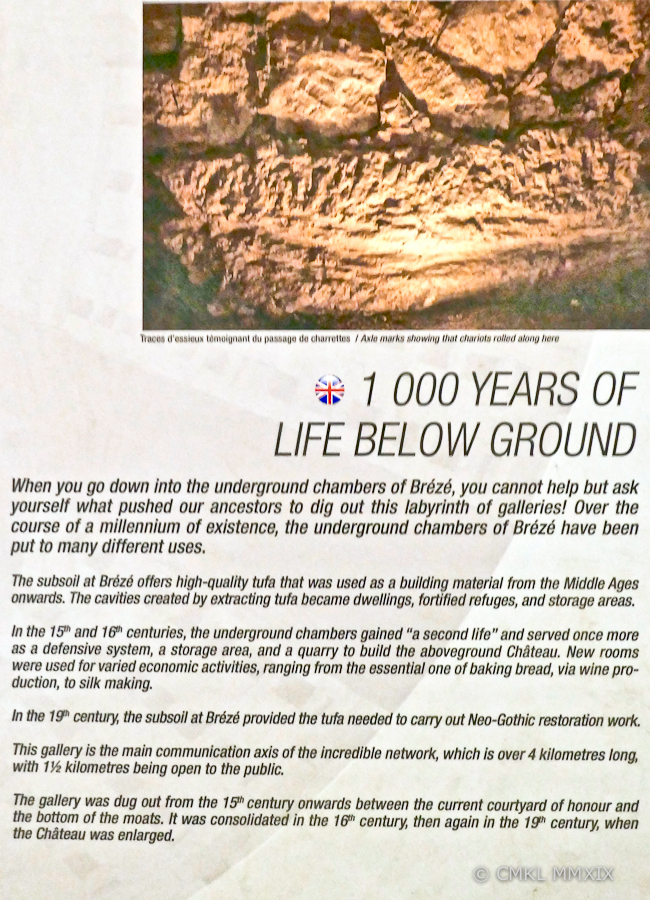 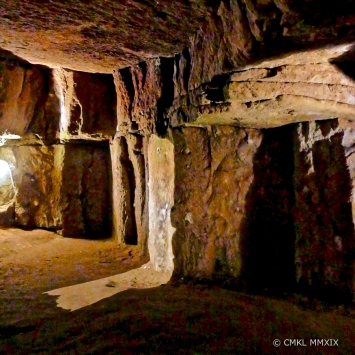 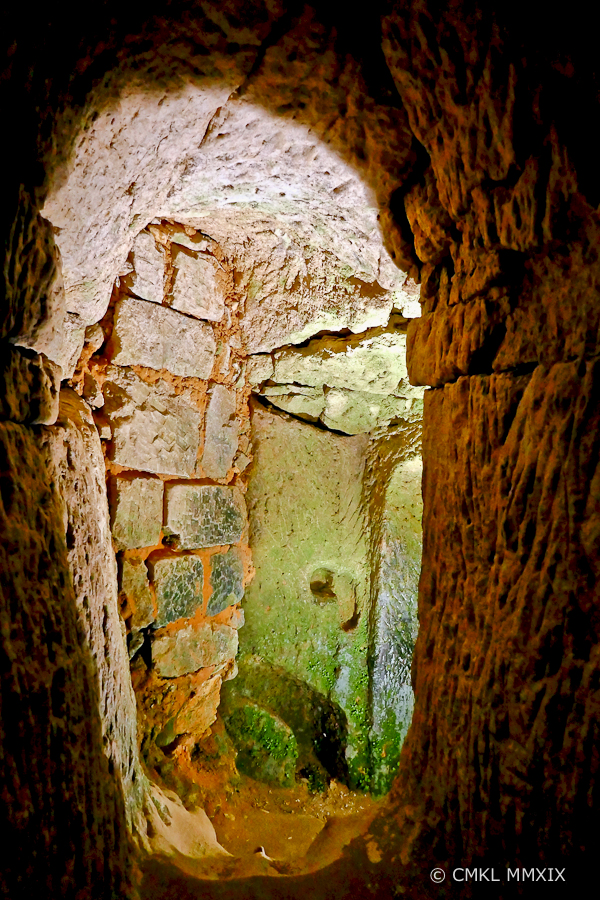 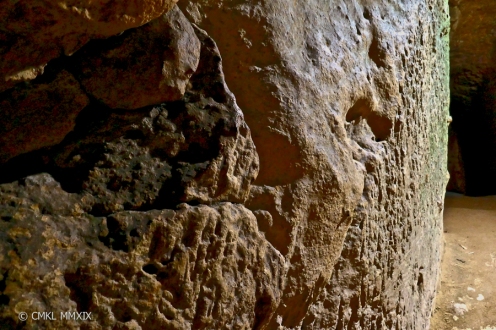 Did you see the nail?

Our visit to the underground fortification was amazing but also disorienting, at least for me. First of all, the unusual combination of a tufa cave with brick masonry work seemed somehow confusing, despite the fact that the entire system was manmade. Additionally, it was very difficult for me to navigate through the ancient spaces owing to my vision issue. My longterm readers might remember that I have an idiopathic trochlear nerve palsy in my left eye. This paralysis causes double vision which makes it impossible to focus. In order to consolidate input in the visual cortex, I have to wear a prism incorporated in the left lens of my glasses. A less desirable consequence of such a prism is a restricted field of vision. Essentially, I only get a clear image if I look straight ahead through my glasses. To illustrate, if I need to back up the car, I can’t just turn my head to look over my shoulder. Looking in such a sharp angle through my glasses renders my vision completely blurry. Instead, I have to twist my upper body in the car seat, rotating my whole face toward the rear. Equally, to walk down a staircase safely or walk on uneven ground, like in a medieval tufa cave, for example, I have to tilt my face downward to bring my eyes, or rather my glasses, in line with the steps or the ground. The illumination in the cave system didn’t improve this fiddly situation either. Many of the lights were uplights, mounted low to the ground. The sharp contrast between darkish cave ambiance and blinding spotlights, as you might imagine, affects ones balance to some degree. Staggering around a cave hunched over to detect pitfalls on the ground, increases your chances to bump into stone outcroppings and low lintels considerably, trust me. I used to be quite agile, but my mountain goat days are definitely over! So it was with some relief that I entered the well lit main gallery again and subsequently the sunny moat. 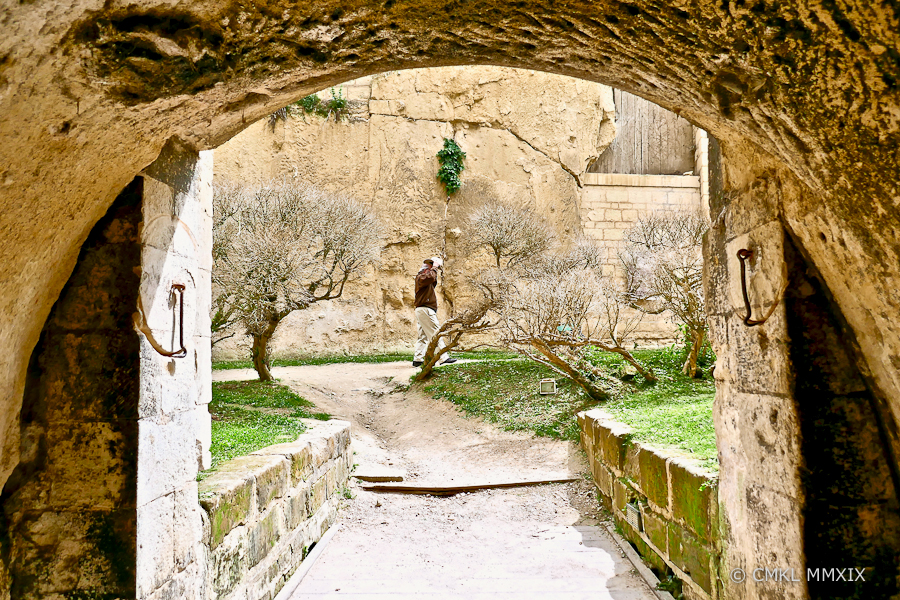 The rockscape behind the smooth wall of the dry moat is perforated with rooms on multiple levels, housing all the operations that were necessary to allow the day-to-day running of the castle, only below ground and largely invisible. This encompassed every conceivable activity from cooking and baking to winemaking, as well as more uncommon crafts like the castle’s silk production and there was even a cooperage. The chart below shows how extensive a cave system it was, a veritable underground town.

The numerals above indicate 1. Roche de Brézé, a light shaft with its surrounding caves beneath the castle proper which included 2. the underground stable. 3. refers to the Bartizan, a defense tower, and a drawbridge, no longer in existence. 4. was the silkworm nursery & silk processing plant, 5. was a cooler or icehouse, while 6. indicates the former bakery operations. In huge, multilevel cavernous spaces we find 7. the grape pressing shed and 8. the cooperage. Both 9. Baffou Rock and 10. Cave Saint Vincent were separate cave systems with individual light shafts which were once used by villagers. 11. was the [secret] entrance to the tunnel networks, and 12. were dungeons in the castle foundation. The caves surrounding the castle were connected to the caves beneath it through the dry moat. The Bartizan was used to protect the cave entrances. During one particular war, sorry I forgot the specifics, 500 troops were stationed in the moat and adjacent caves to protect the estate and the inhabitants of nearby villages who had sought refuge in the caves. 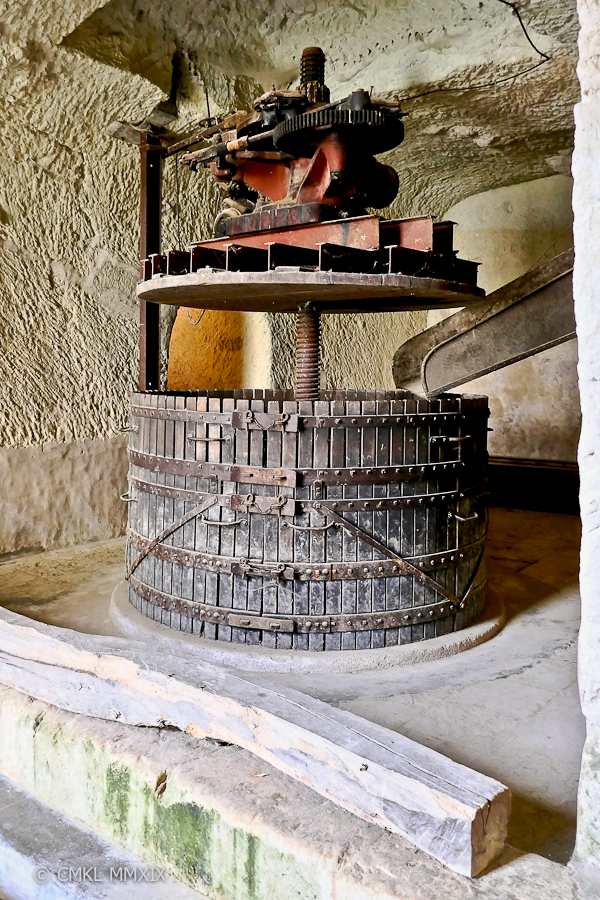 A curious incident occurred in one of the multi-level barn caves or cave-barns near the winemaking facilities where I was exploring a mezzanine balcony. 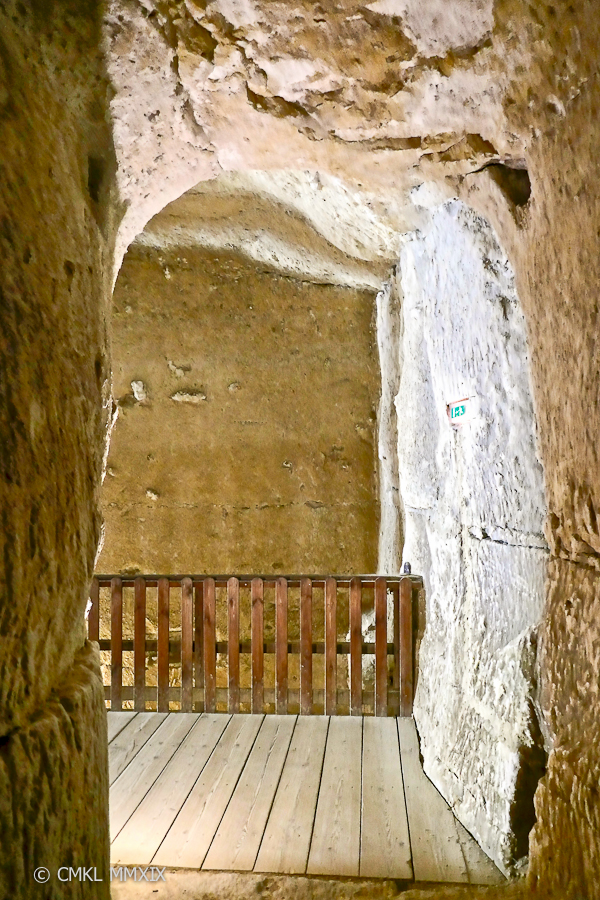 When I looked down over this wooden banister, I discovered the victim of a horrific crime. 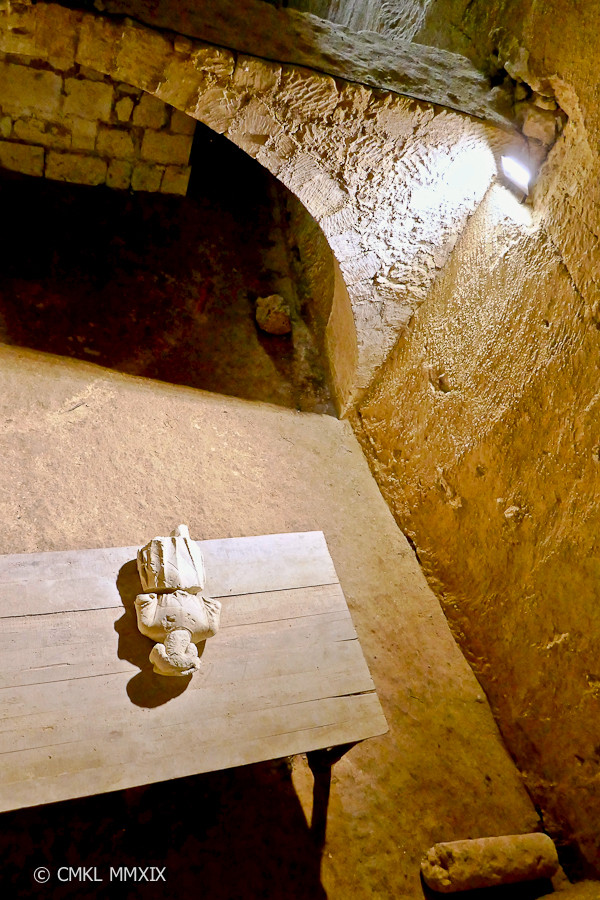 Keeping the mutilated victim in view, I tried very hard to get closer, but all approaches turned into dead ends leading further and further away from the scene of the crime.

Meanwhile, out in the sunny moat, maintenance activities presented a much more pedestrian scene,

and happy pigeons were everywhere. As a matter of fact, past Lords of the Château de Brézé allowed villagers the free use of the troglodyte bread ovens as compensation for the damages their pigeons caused in the surrounding fields.

Leaving the caves behind, I walked through the moat, alive with rich grasses, flowers, mosses, and even small trees, in a clockwise circle around the château towering above me.

We waited till a large group of school children continued with their guided tour, before we entered the corner tower to check out the interior of Brézé castle. 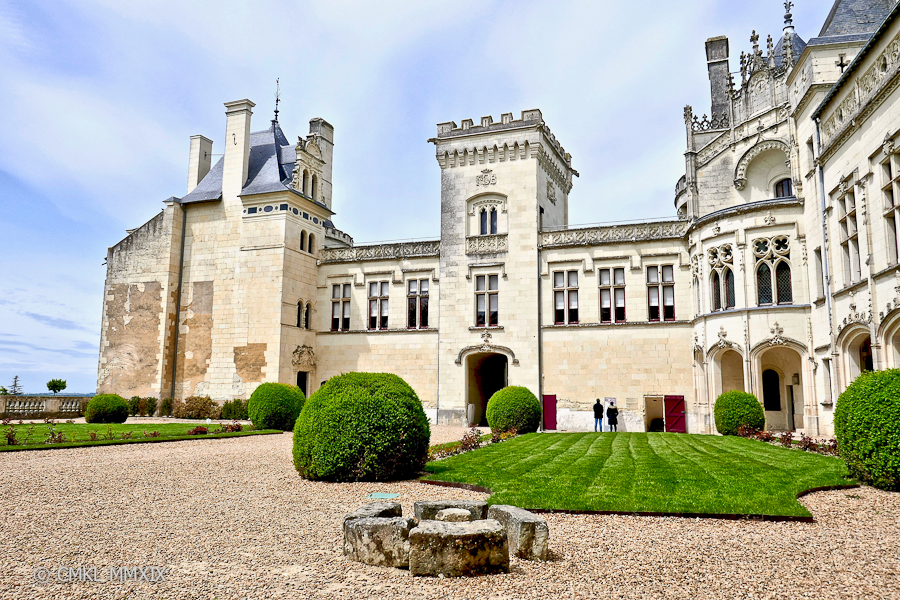 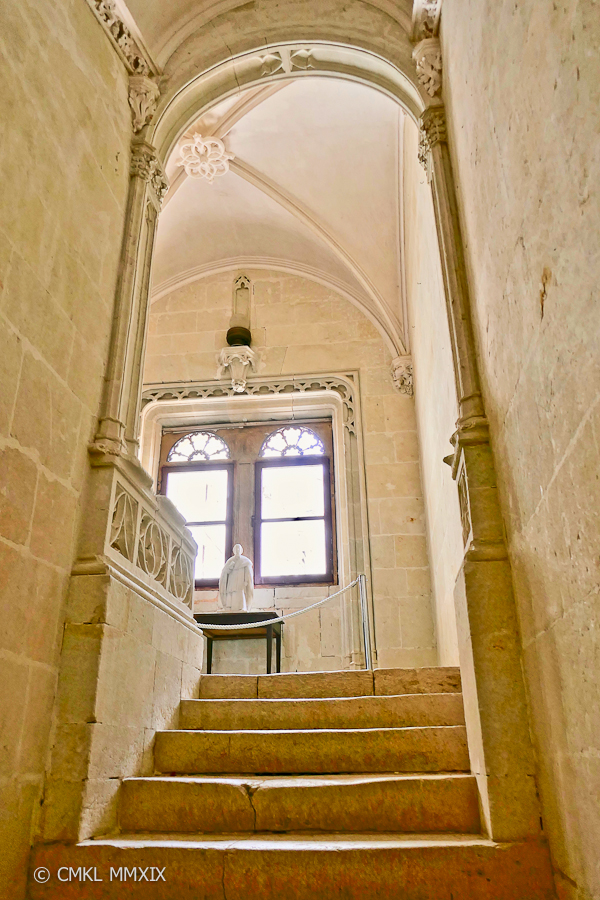 Past this elegant stone staircase, it was forbidden to take pictures. There were mostly unfurnished poky rooms in the upper floor and attic, formerly used by domestic workers plus an enfilade of posh rooms outfitted in Renaissance style and later periods which had apparently been used by a resident bishop, as well as visiting dignitaries. The bishop also had the use of a fabulous bathroom with faucets in the shape of swan necks plus, the ultimate in luxury, a warming drawer for his bath towel! The only really beautiful room was the main reception room, a gallery stretching the full length and breadth of the central wing of the castle. All in all, I was more impressed with the moat and its associated cave systems than the Renaissance castle above.