After several months of planning and scheduling, we were ready to tackle a road trip into unchartered territory – at least for us. We were preparing to visit Helsinki in Finland, Tallinn in Estonia, Riga in Latvia, and Vilnius, Kaunas, and Klaipeda in Lithuania. The precise sequence of towns was dictated by geography and, most importantly, by the routes of car ferries which had to carry us and our vehicle first from Germany to Helsinki and then from Helsinki to Tallinn, and finally from Klaipeda back to Germany. The ferry trips were vital for our endeavor since we could never have managed the distances without them. As it were, we drove 4178 Km and cruised on the Baltic Sea for another 1262 nautical miles or 2337 Km, bringing our travel distance to a grand total of 6515 Km. Not too bad for a couple of fuddy-duddies in the span of 25 days, right? And I haven’t even added our tram or streetcar mileage within the assorted cities! Another kind of tally was also a consideration for our trip planning, at least tongue-in-cheek: the country count. Adding four new destinations, it rose to 52 countries visited for Barry and 37 countries for me. Naturally, we had a mild interest in local customs, culture, and cuisine as well …

On our first travel day, the trajectory plotted for our epic northern journey took us from Cognac, Charente, France, to Le Chant du Merle Chambre d’Hôtes in Neufchâteau, Province Luxembourg, Region Wallonia, Belgium. The B&B Le Chant du Merle, the Song of the Blackbird, its name possibly echoing the anthem of Wallonia, Le Chant des Wallons, overlooked a picturesque hillside in the Ardenne Forest of Wallonia, the French-speaking part of the Kingdom of Belgium. This region suffered greatly in two World Wars and it lost its economic foundation toward the end of the 20th century when its steel industry shut down, yet it represents so much more than heartache and unemployment. With its gorgeous landscape, it is tailor-made for adventure vacations, perfect for hiking, mountain biking, canoeing, and fishing for example – especially since it is not yet overrun by mass tourism. Alas, we only had a drive-through experience of the deep forests and rugged cliffside of this sparsely populated ancient mountain range. Thus we solely caught brief glimpses of Les Ardennes, as the French say, as opposed to L’Ardenne, singular, as the people of Wallonia call their region,  which was explained to us by our gracious hosts with whom we spent a lovely after-dinner time in conversation. They introduced us to one of the numerous special beers produced in Belgium, the Trappist Orval beer of Gaume. Did you know that each Belgian beer has its unique glass? Quite a tradition! In the website of the Belgian Beer Factory, you’ll find 16 pages of beer glasses on offer, well, almost. Some of them are not in stock right now.

From Belgium, we continued diagonally across northern Germany to the Hansestadt Lübeck, Schleswig-Holstein, Germany. We enjoyed spending a day visiting iconic sites in this once mighty and important trading center, focusing on the trifecta of the Holstentor, the western gate to the old city center, marzipan, the sweet that became a hallmark of Lübeck, and Thomas Mann who needs no introduction. 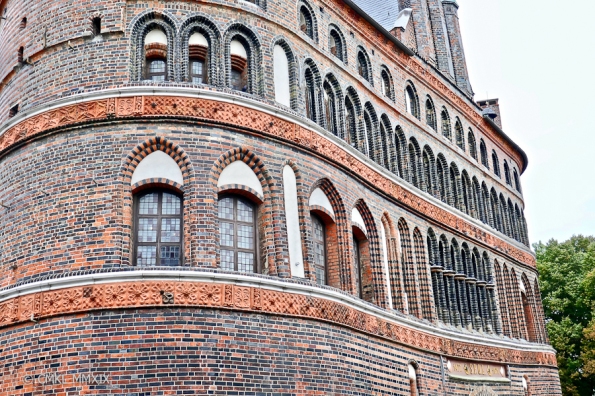 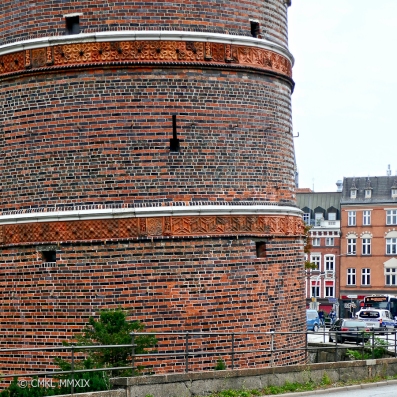 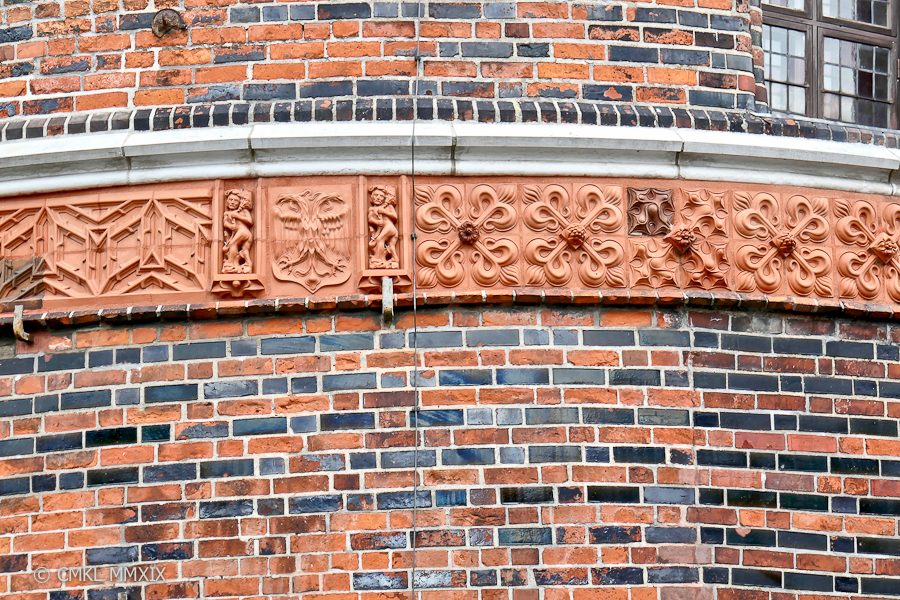 Walking through the old center of town, we stumbled across some funky tidbits of this and that relating to Lübeck’s history. 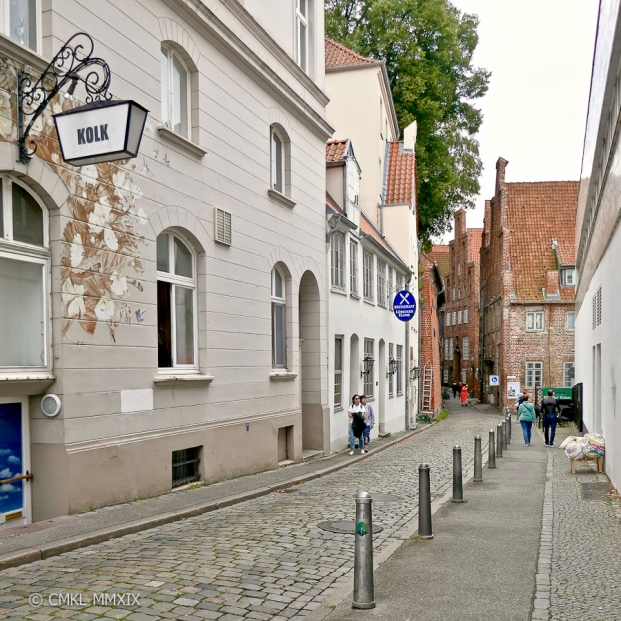 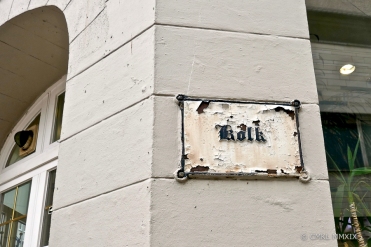 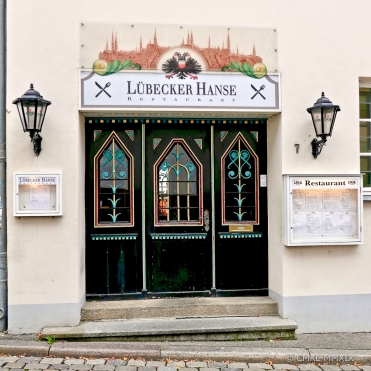 Serving dishes of the Baltic region in Kolk street. 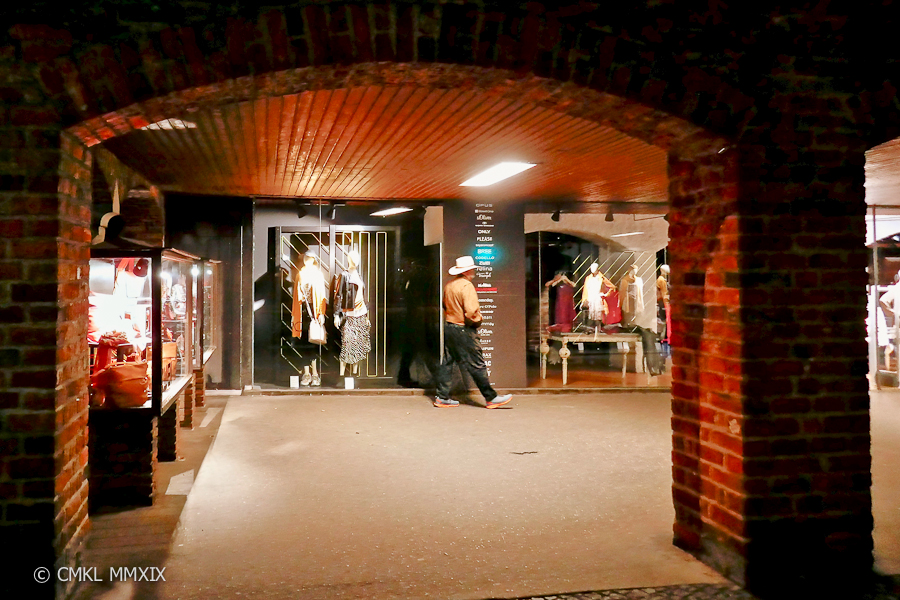 Right behind the puppy anxiously awaiting the return of its master, we revisited the retaining wall seen earlier in Kolk alley below. From this higher venue, we got a good look at the artisanal gables with their brick details. 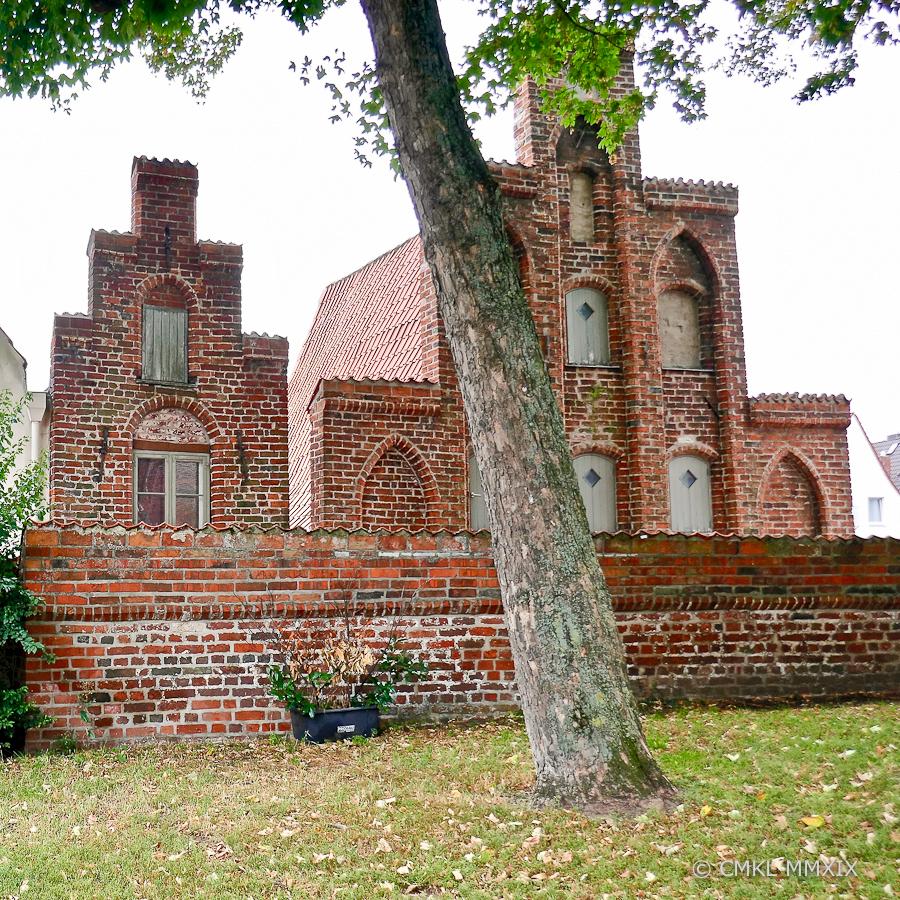 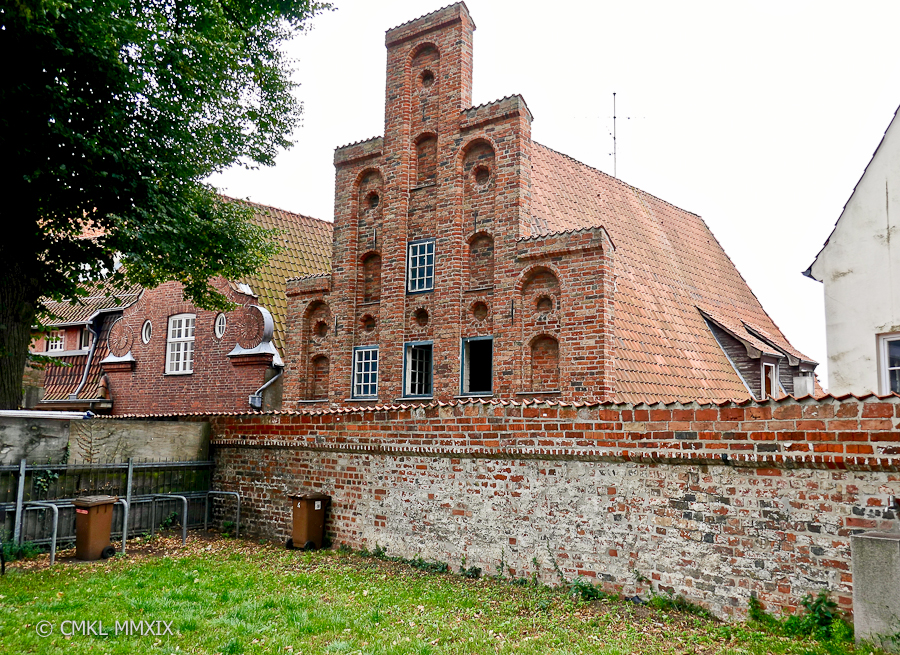 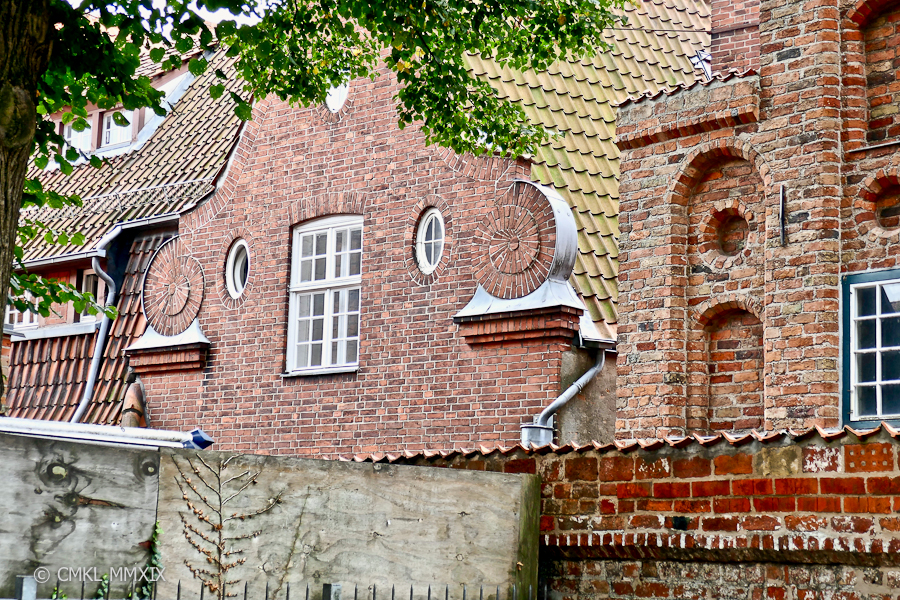 Across from St. Petri we came upon the Rathaus courtyard. Quite the posh affair it is, that town hall, despite an odd mishmash of styles, materials, and finishes. 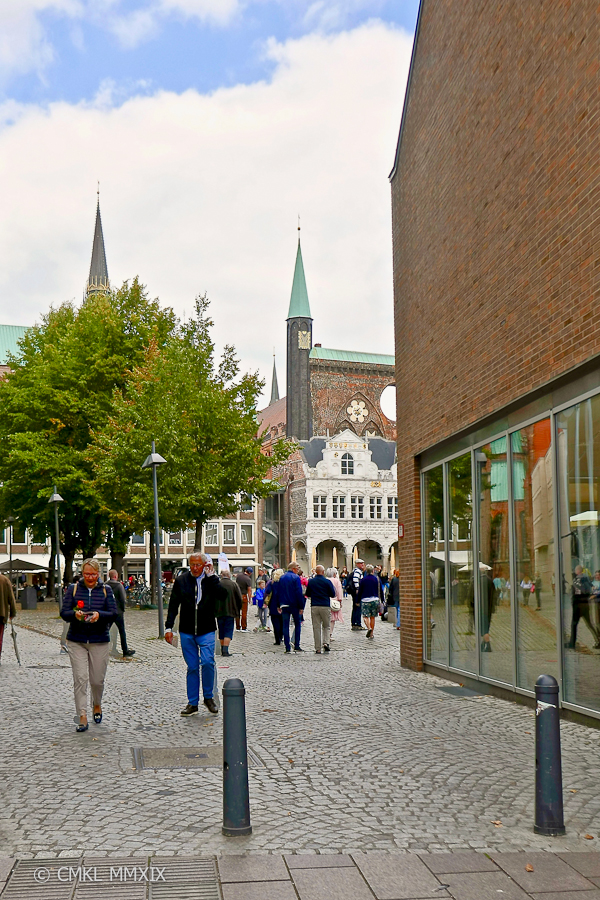 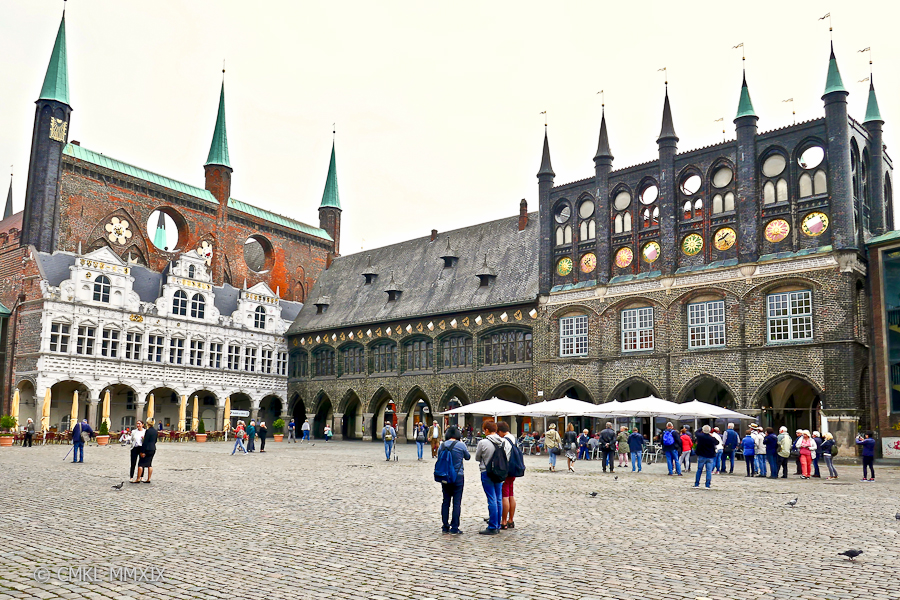 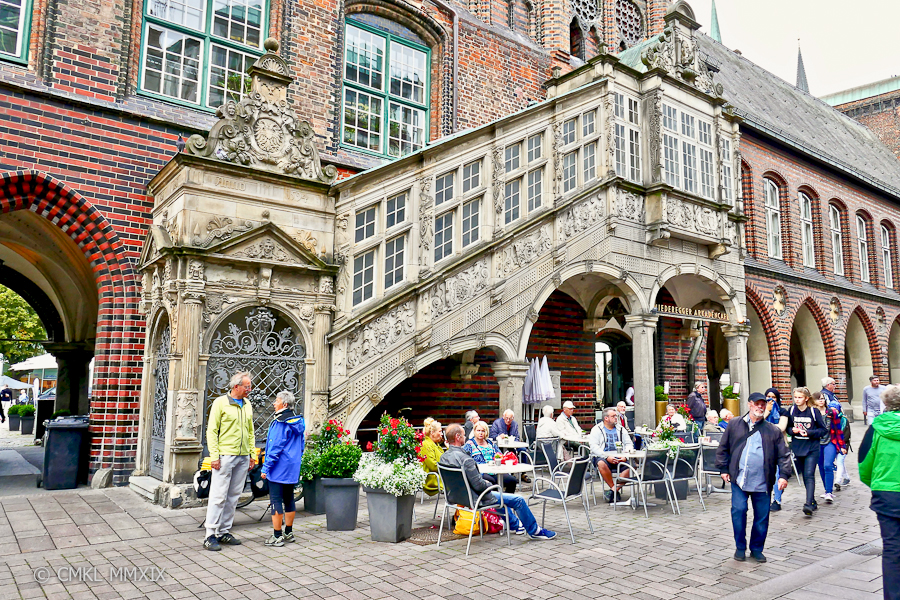 We crossed through one of the gothic arches, encountering first the famous Renaissance staircase of the Rathaus, then, across the street, the main object of this excursion appeared before my delighted eyes: marzipan. And I mean, marzipan galore, more marzipan in one place than you’ve ever seen in your entire life.

Inside the Niederegger Emporium, the sales floor on the ground level offered an overpowering multitude of marzipan articles. 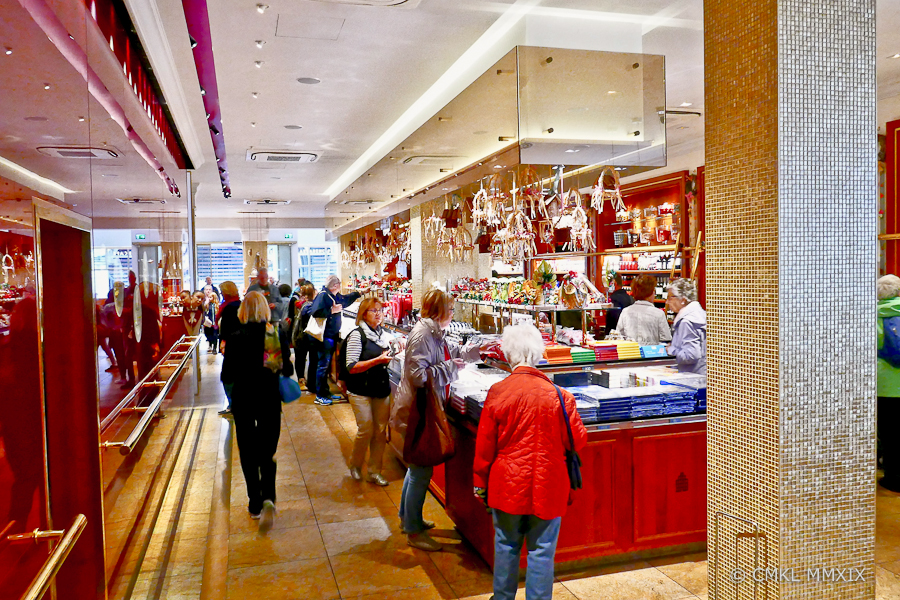 Among them, some rather elaborate marzipan sculptures.

Along one side of the shop were display cases for roughly two-dozen different types of Torten or fancy cakes. One can order for take-out or to eat in the café in the rear of the sales floor, or on the terrace under the arcades of the Rathaus. We climbed to the second floor of the building where we settled in the comfortable chairs of the full-service restaurant to enjoy a break from marzipan gazing or was it grazing? 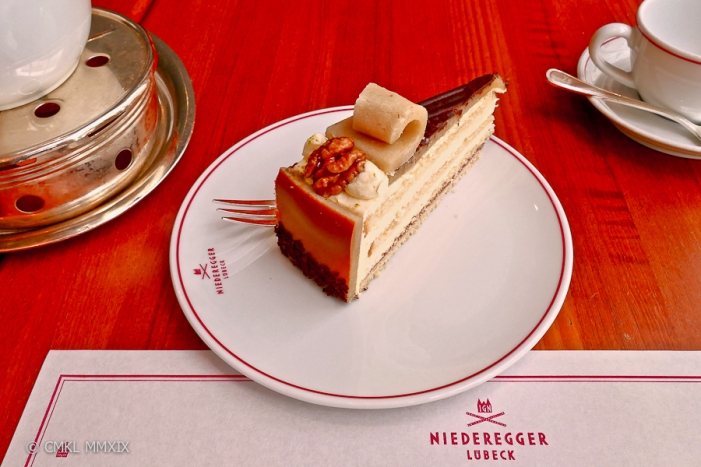 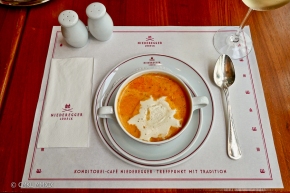 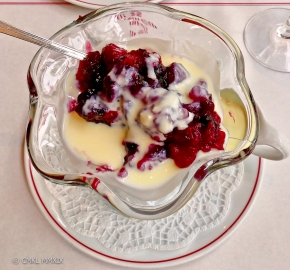 After lunch, we proceeded to the Marzipan Salon on the third floor, a museum explaining the origins and composition of this delectable Persian medicine which turned into a beloved sweet the world over. 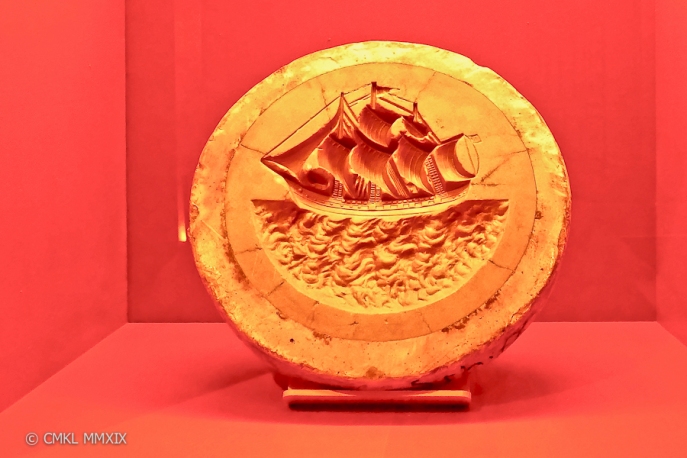 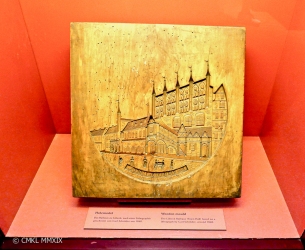 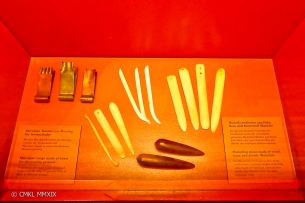 There were models and display case with instructional material and tools, as well as descriptions regarding the history of marzipan in general and specifics of the importance of this precious commodity for the Hansestadt Lübeck. As we meandered through the many exhibits, one of the features of this third-floor space was actually the view from its windows overlooking the splendor of the Rathaus across the width of Breitestraße. 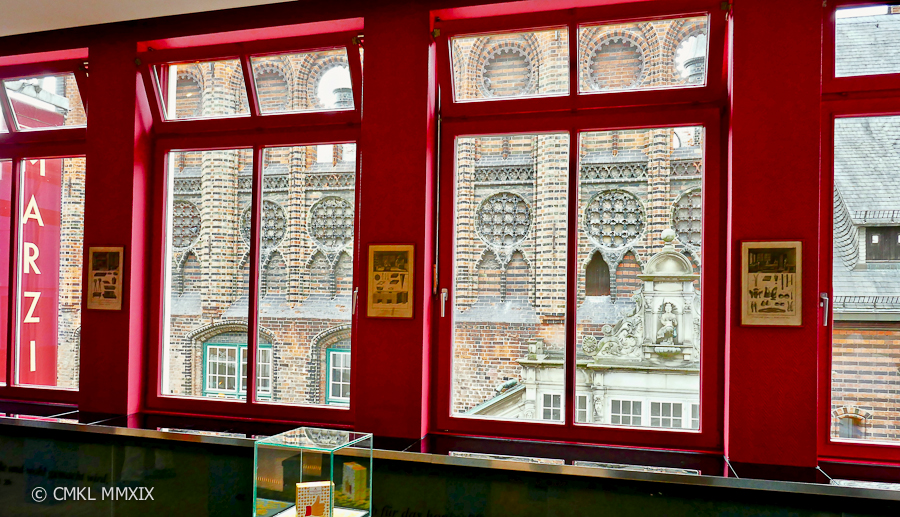 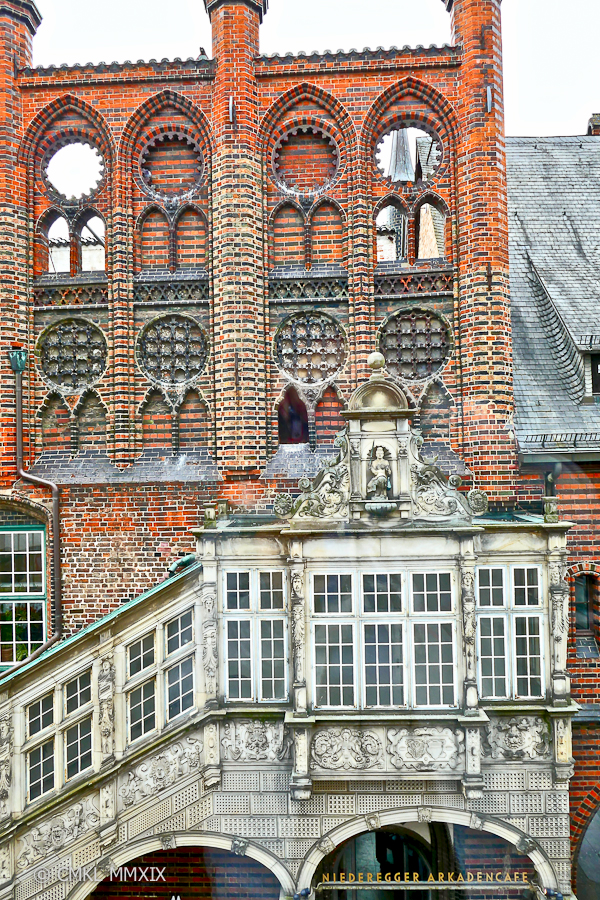 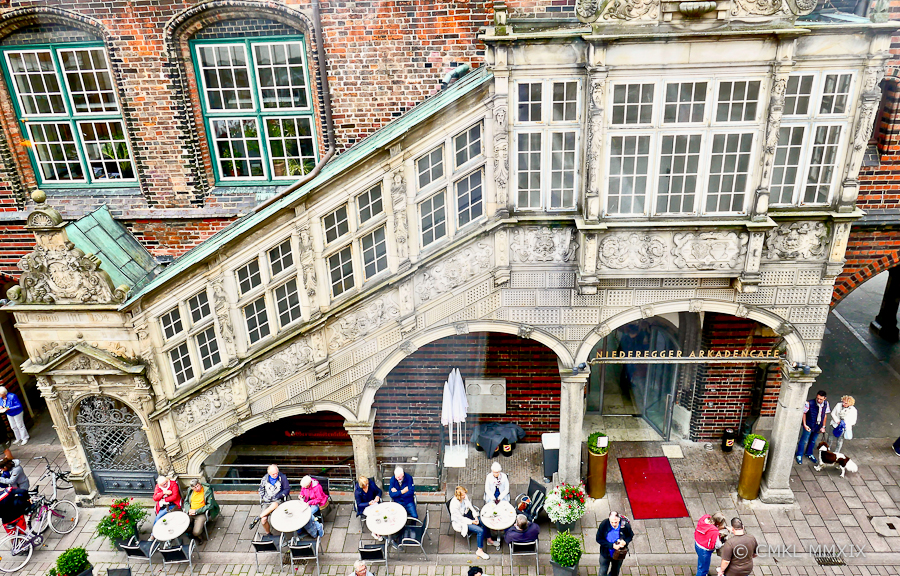 However, the main attractions were the life-size (!) marzipan (!!) sculptures of twelve historical personages which were grouped at a large table, quite reminiscent of the most famous Seder in history, only ever so slightly macabre. 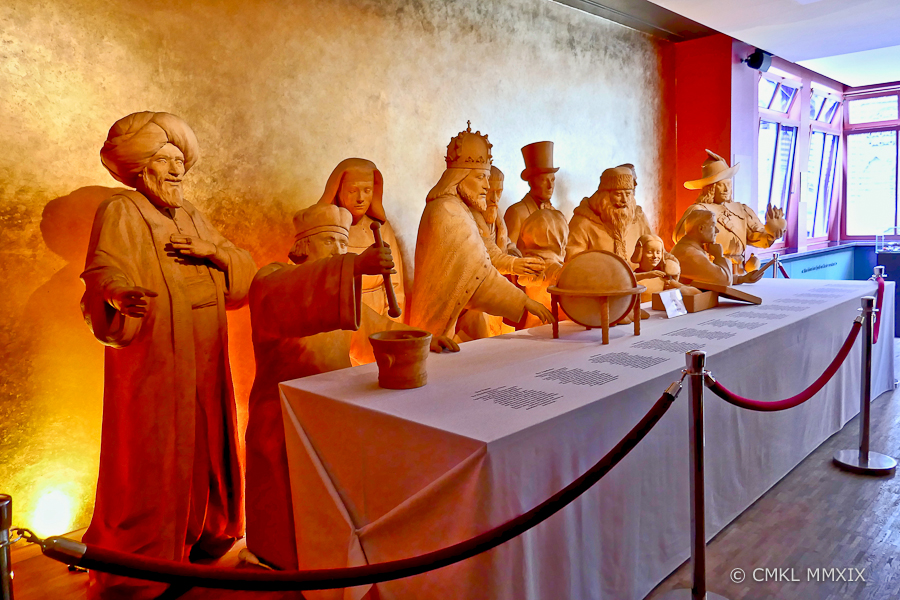 Taking our cue here post-haste, we proceeded forthwith to Mr. Mann’s boyhood home just around the corner from the Marzipan Paradise.

The Mann family was strongly opposed to the Nationalsozialistische Deutsche Arbeiterpartei [NSDAP, or National Socialist Worker’s Party] otherwise known as Hitler’s Nazi Party, and Heinrich was, for a time, the best known Nazi opponent among the Manns owing to his eminence in Berlin. In June of 1932, ahead of parliamentary elections and while serving as president of the poetry division of the Prussian Academy of Arts, he signed an “Urgent Call for Unity”, a public appeal to the voting public to unite against Naziism. This Dringender Appell was signed by 30+ scientists, artists, and celebrities, among them Albert Einstein. Two weeks after Hitler’s selection as Reichskanzler [Chancellor] a similar text was published in a last-ditch effort to arouse the voter’s conscience, again signed by Heinrich Mann. Consequently, he was first relieved of his Academy presidency, then his citizenship, and, as was customary among Nazis, his books were publically burned. It is interesting to note that Thomas Mann’s books were never burned. Owing to the Nobel Price honor and his international standing, I suppose, the cowards didn’t dare. This is my translation of the last sentence of the “Urgent Call for Unity” appeal:

Let us make sure that neither inertia of convenience nor the cowardice living in our hearts will allow us to sink into barbarism. 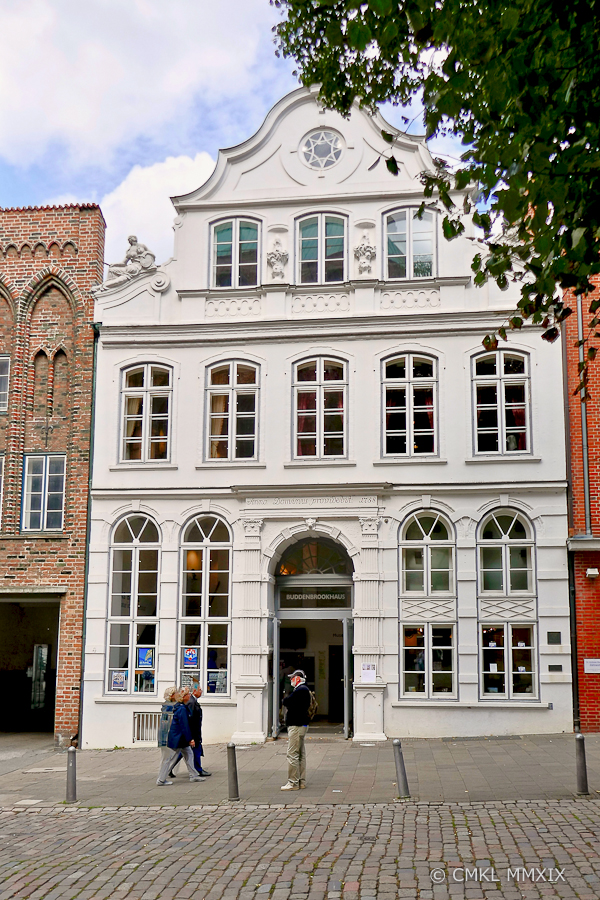 After one last drink vis-à-vis the row of ancient salt warehouses, no longer awaiting loaded barges on the river Trave but forming a delightful backdrop for the tourists’ excursion boats, 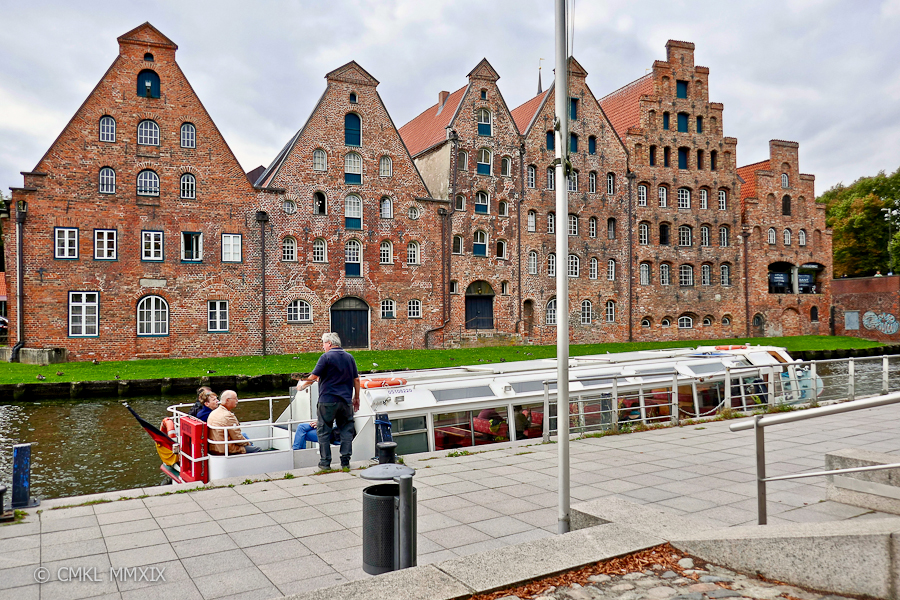 it was time for us to focus on the ferry ride from Germany to Finland. 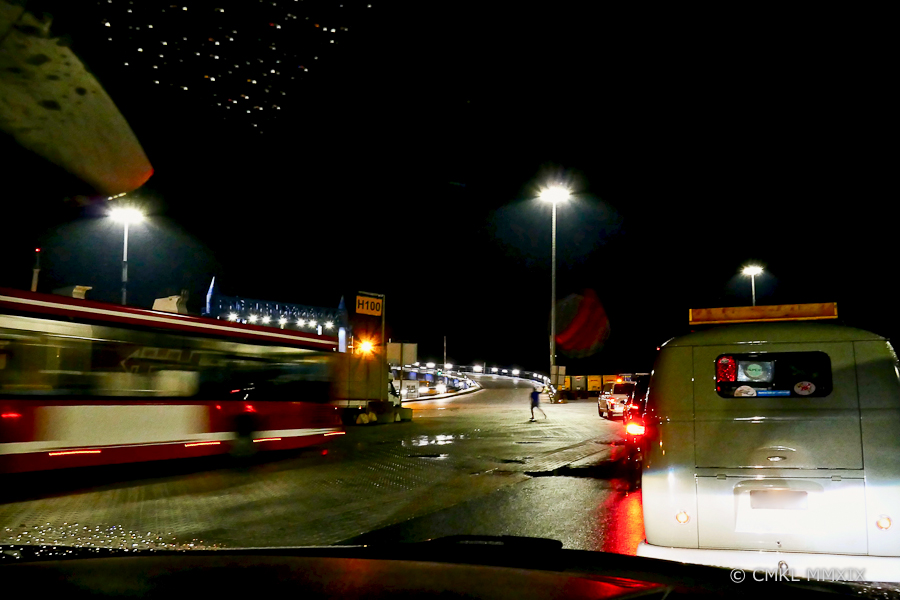