Today, I won’t be telling you about another one of our exciting journeys to foreign shores, simply because there have been no travel adventures for the last six months, nor will there be any for the foreseeable future. We are making plans, but until a reasonably reliable vaccine has been developed, travel will happen solely in our imagination.

Instead, I want to guide your thoughts back to the last trip we undertook before the global pandemic locked all our front doors. Late last December we drove to Bilbao for our annual anniversary celebration [You can read all about our fantastic discoveries in Bilbao in the previous posts].

One of the main attractions in Bilbao is the Frank O. Gehry designed Guggenheim Museum of Contemporary Art. As in most other museums the world over, you’ll find a gift shop within the hallowed halls which we visited a few times taking note of several items. Ultimately, we only bought a few books and a birthday present for a friend. It’s so easy to be sucked, or suckered in by all those lovely, overpriced tchotchkes, isn’t it? But we stood firm! Which we regretted, naturally, as soon as we got back home. Since we generally prefer to buy directly from a producer or artisan, I had taken several snaps as a memory aid of items we especially noticed on the extensive shelves of the Guggenheim gift shop. Among those pictures was the reference to a cruet set called “Ajorí” shaped, as the name implied, like a bulb of garlic. 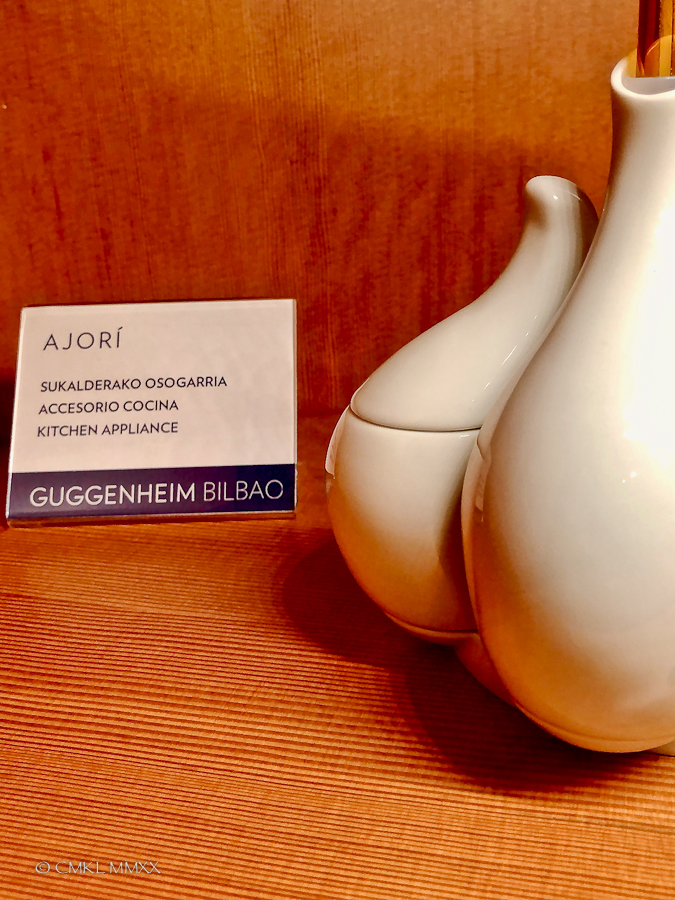 The soft, organic curves of Ajorí were firmly lodged in the recesses of my soul and I got in touch with its creators right away. Pilar, the co-designer of Ajorí, agreed with me that we definitely must give this Knoblauchknolle, this head of garlic, a home with us. Knoblauch is the German word for garlic. I think it carries the heavy scent of garlic within its lengthy line-up of letters. Additionally, eine Knolle, a tuber, is the embodiment of a round, intrinsically motherly shape, heavy with clotted earth. Thus, the gravitas of a Knoblauchknolle represents the embodiment of Le Terroir, The Land, the very essence of countryside and local farming excellence. 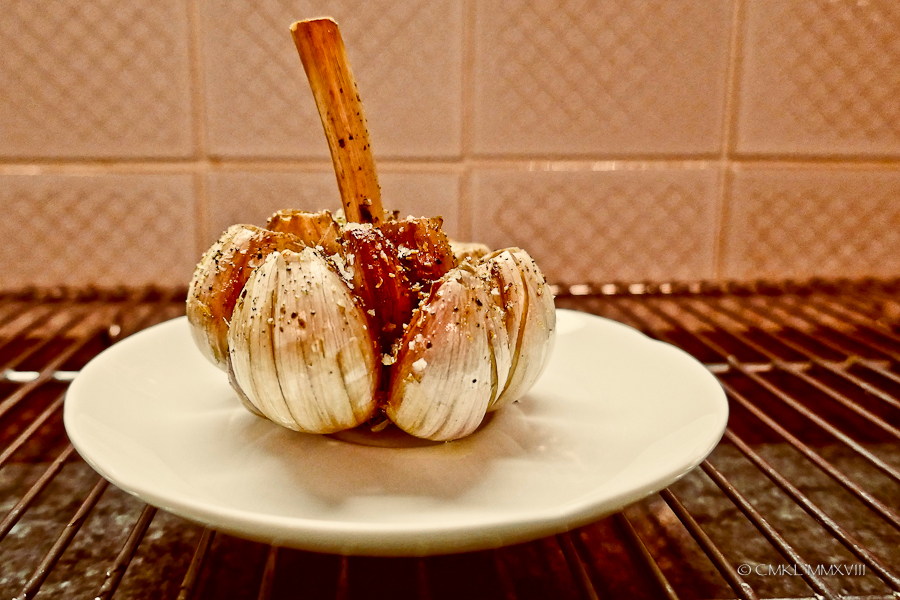 In their Madrid design studio photoAlquimia, Pilar Balsalobre de la Hera, Art Director, designer, animator, illustrator, draftsperson, and dancer and her partner Carlos Jiménez Perez, Project Director, conceptualist, filmmaker, photographer, and biologist transmute matter and perception like the alchemists of old. On their website, I came across a further intriguing design. A small sauce dish for one’s sushi pleasure in the shape of a tuna vertebra. Being an anatomist myself, this was certainly not a shape I could reasonably be expected to resist. The lovely vertebrae, sold as a unit of two, went straight into my virtual shopping basket.

Then the waiting began.

At the time of my order, photoAlquimia had no stock available but they put me on their waiting list. Good enough, really, since I was planning both items as birthday presents for my husband in July. Then SARS-CoV-2 hit Europe and with it a global pandemic which halted pretty much any and all production of every conceivable object. Spain was especially hard hit and I didn’t hear from Pilar for several months. When I had long given up, I received an email from her in mid-May: both Ajorí and Soytun were on their way to Cognac! 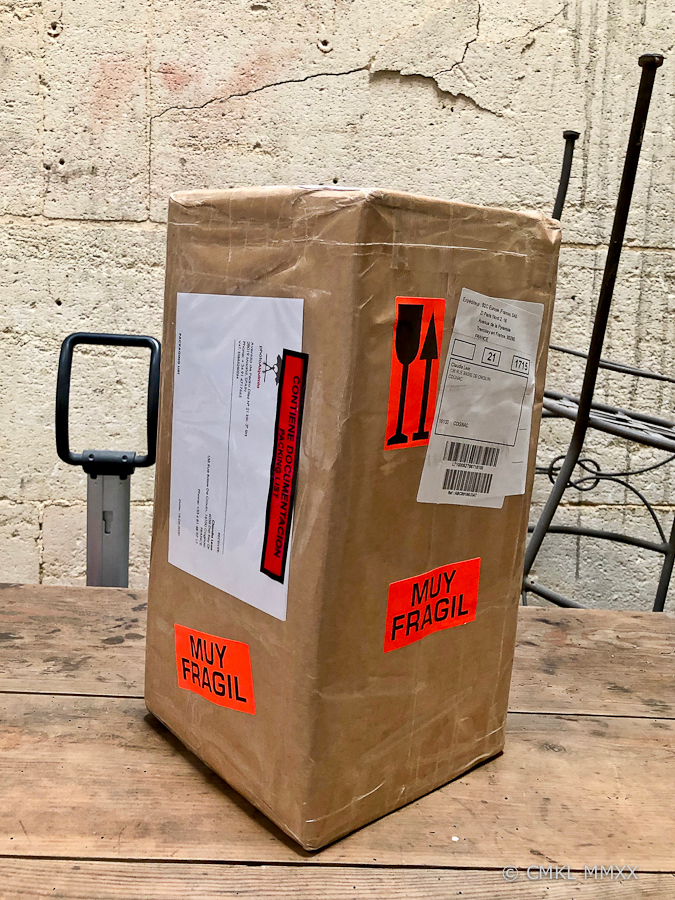 I hid the package in the garage, until, finally, the happy birthday dawned. 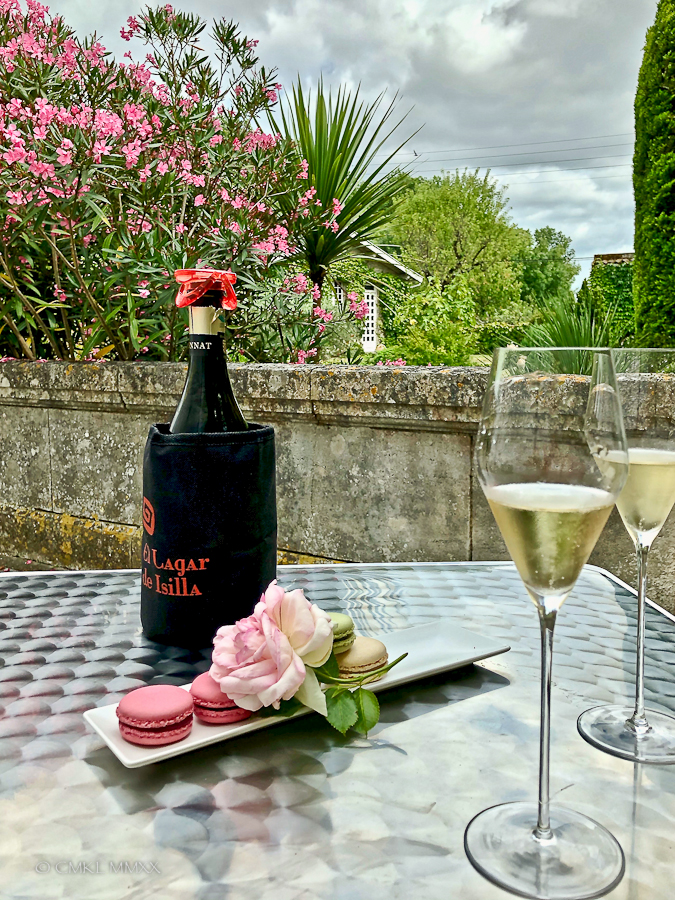 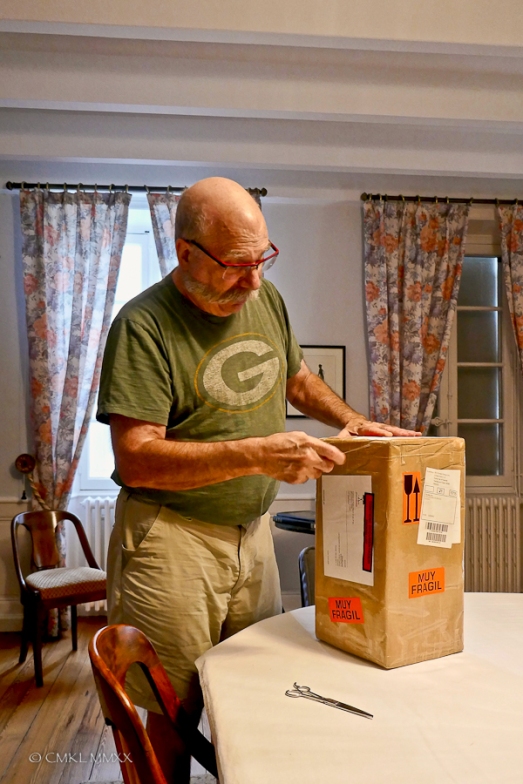 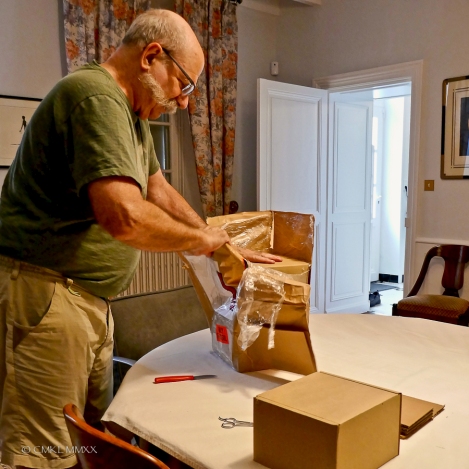 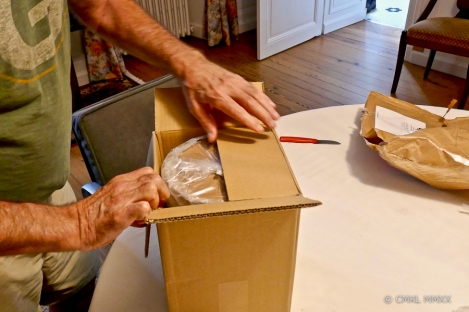 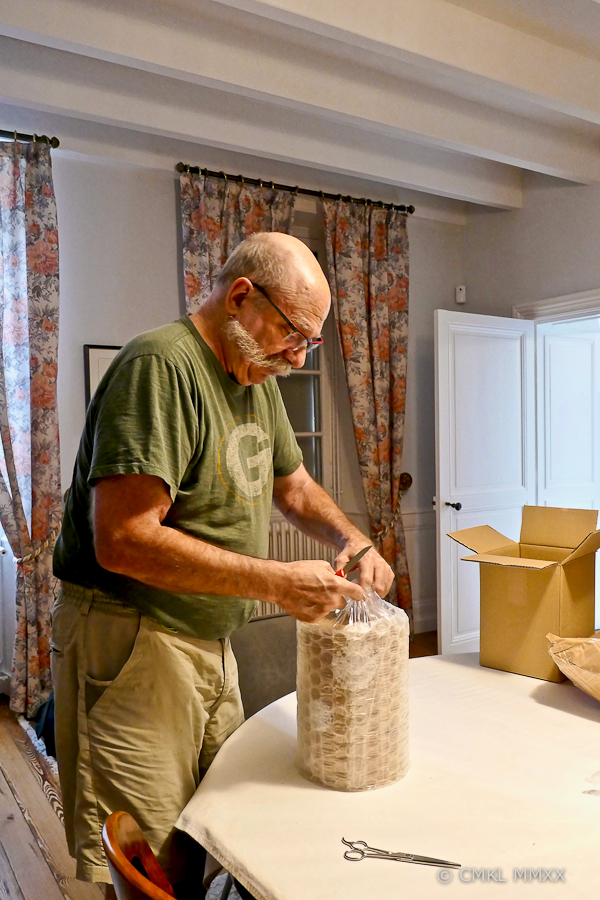 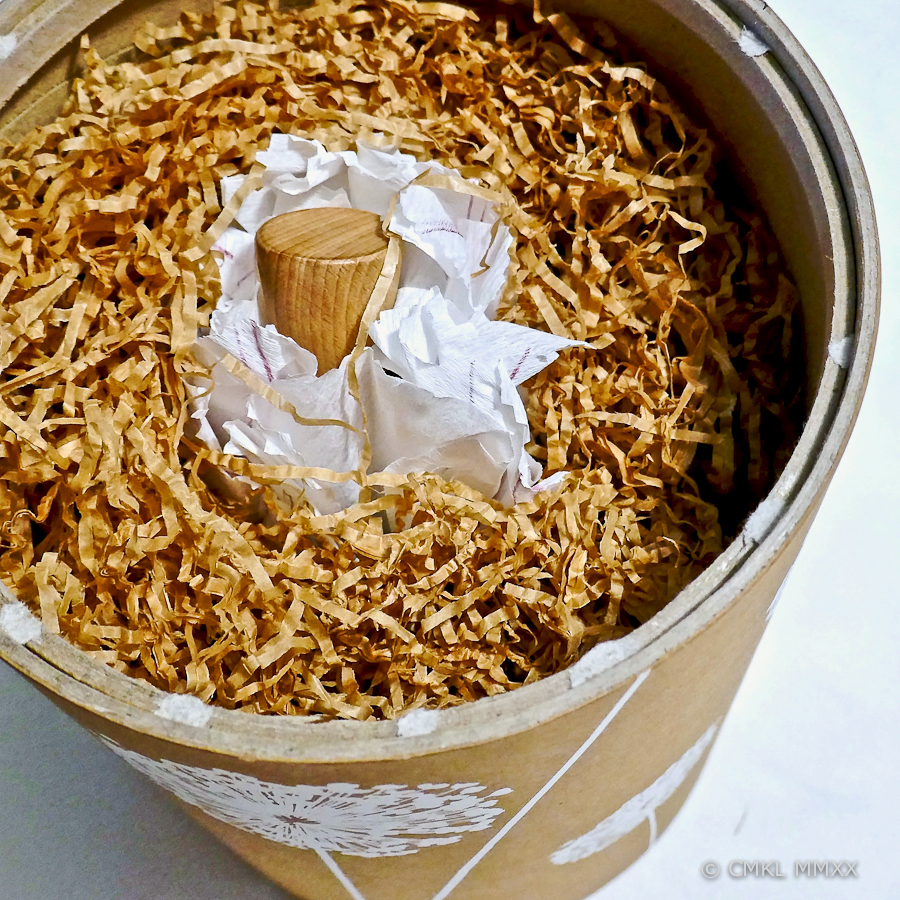 The packaging was amazing, both with respect to sustainability and artistry. From the drawing of garlic flowers on the sturdy outer drum to the meticulously executed cushioning within, everything was exquisite down to the interior tissue paper mimicking the shape and coloring of a garlic bulb. 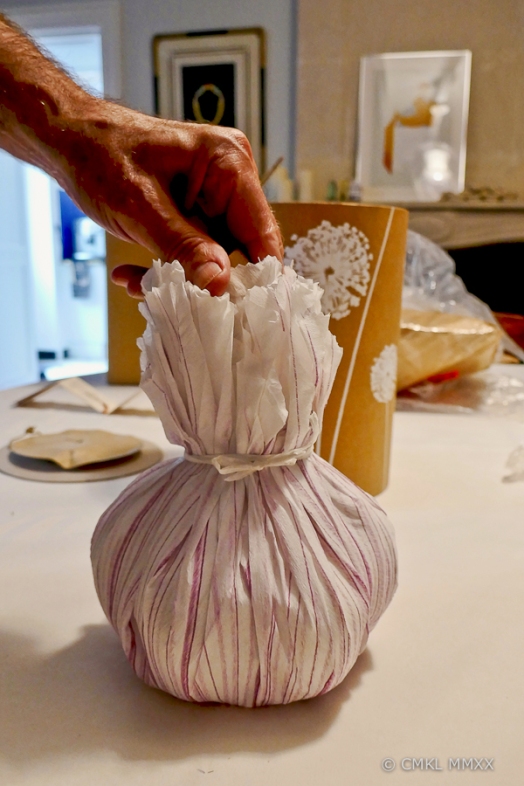 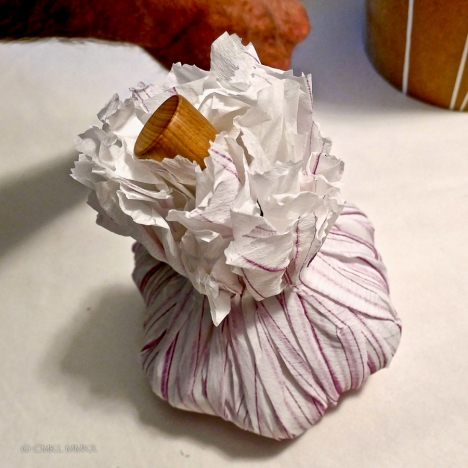 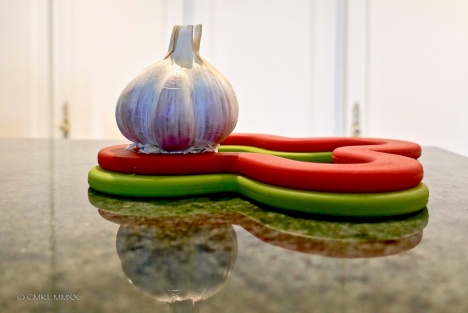 Unwrapping these wonderfully detailed objects was a true pleasure. 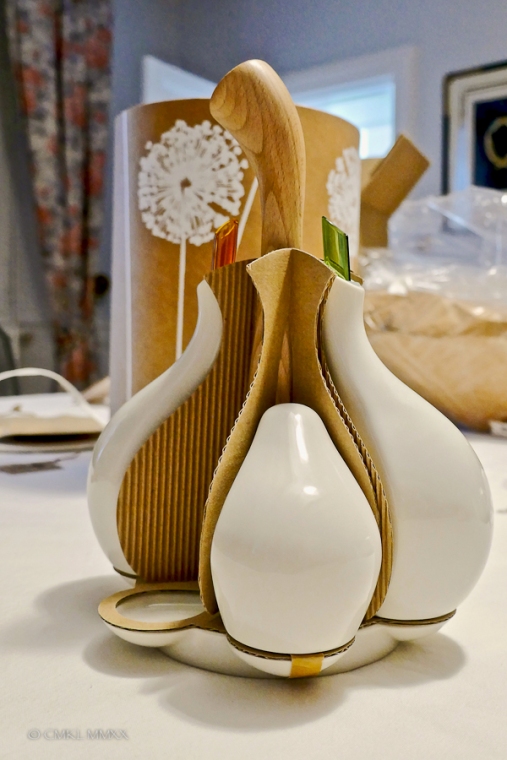 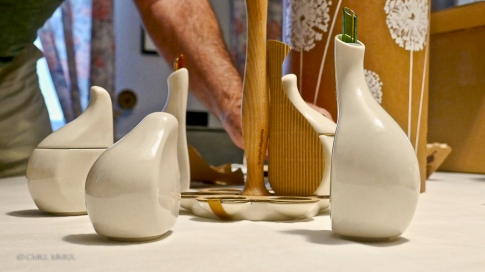 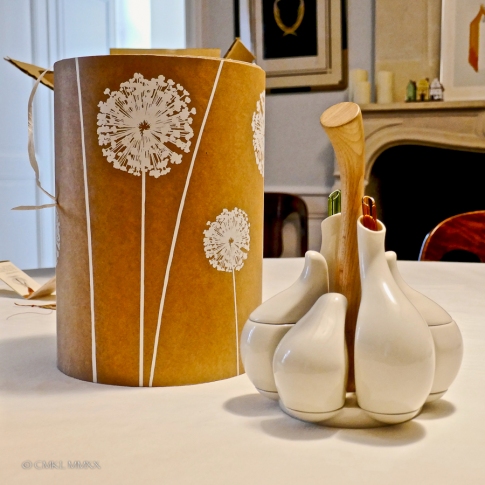 But there was more. Soytun, the bluefin tuna, well, parts of its backbone anyway! 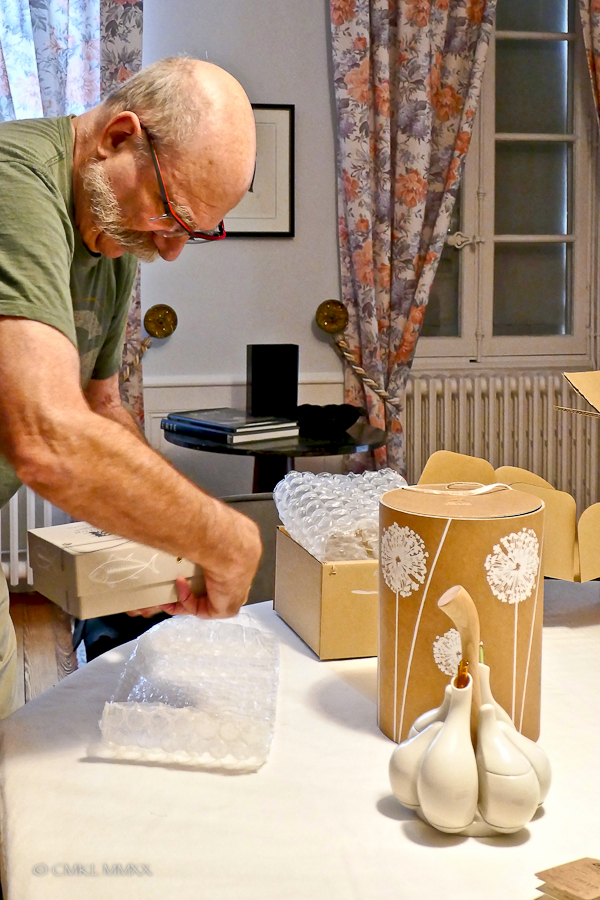 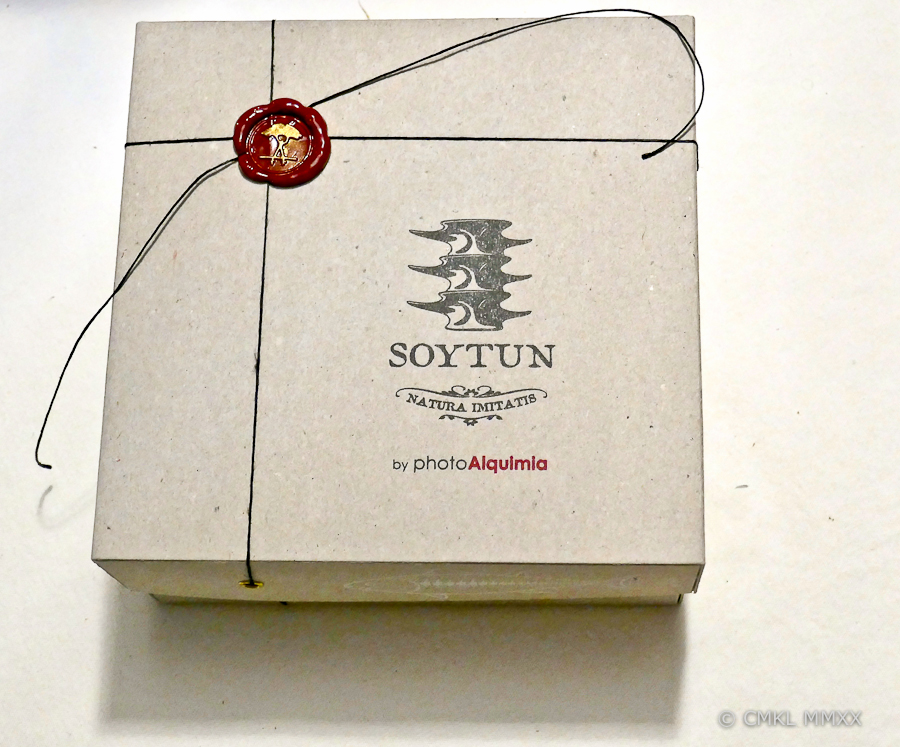 The second photoAlquimia design was encased in a replica of the iconic storage boxes stacked high on dusty shelves of natural history museums, which I do remember from my student days. 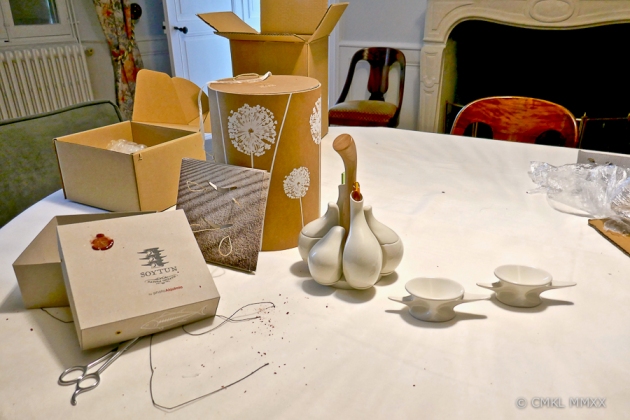 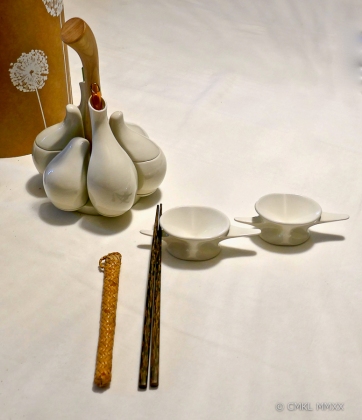 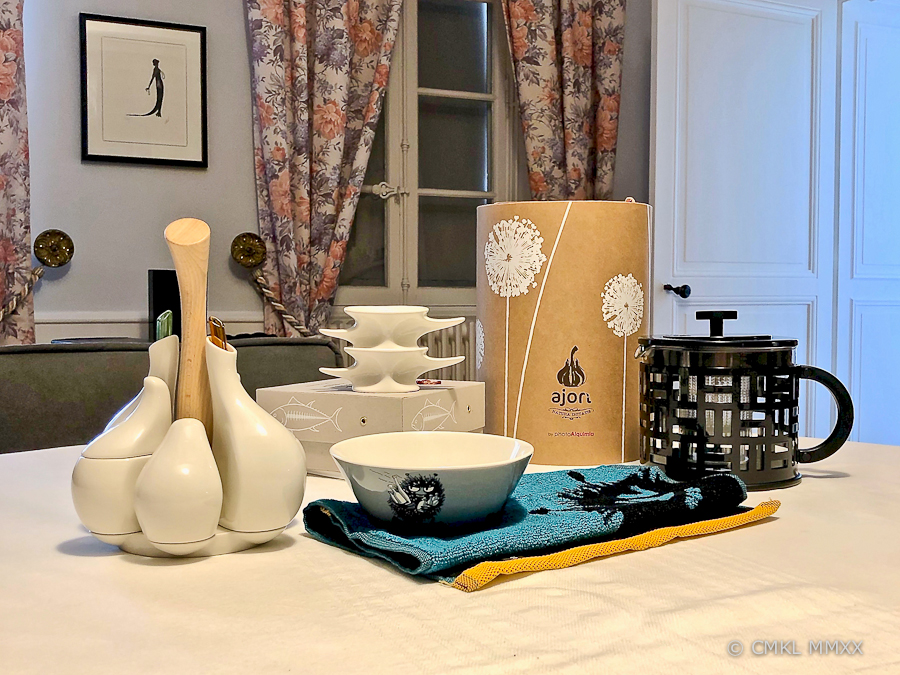 So, here you have the birthday table. The Ajorí cruet set, the Soytun dipping dishes, both by photoAlquimia, a Stinky cereal bowl by Arabia, and a Stinky guest towel [we are great fans of the Moomins!! They are chubby trolls looking a little bit like hippopotamuses which were designed around 1945 by Finnish illustrator Tove Jansson. Barry’s favorite, obviously, is Stinky while mine is Ninny who is invisible but very brave], and last but not least a Bodum tea-press. The birthday boy has taken his seat at the head of the table and one can clearly see that we do need a cruet set! 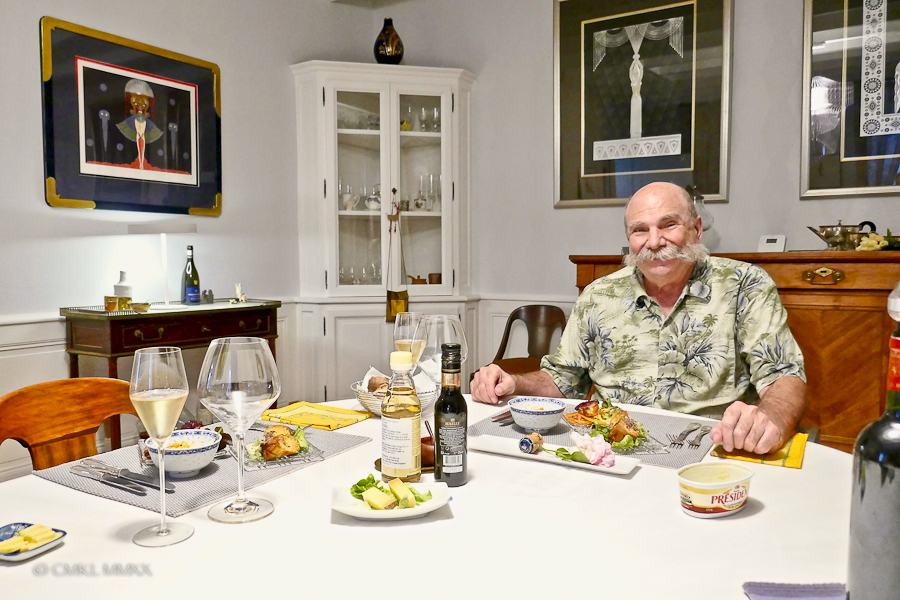 Since then, Ajorí has been filled with balsamic vinegar, olive oil, and stone-ground sweet mustard, and moved into the kitchen to be at hand at a moment’s notice. 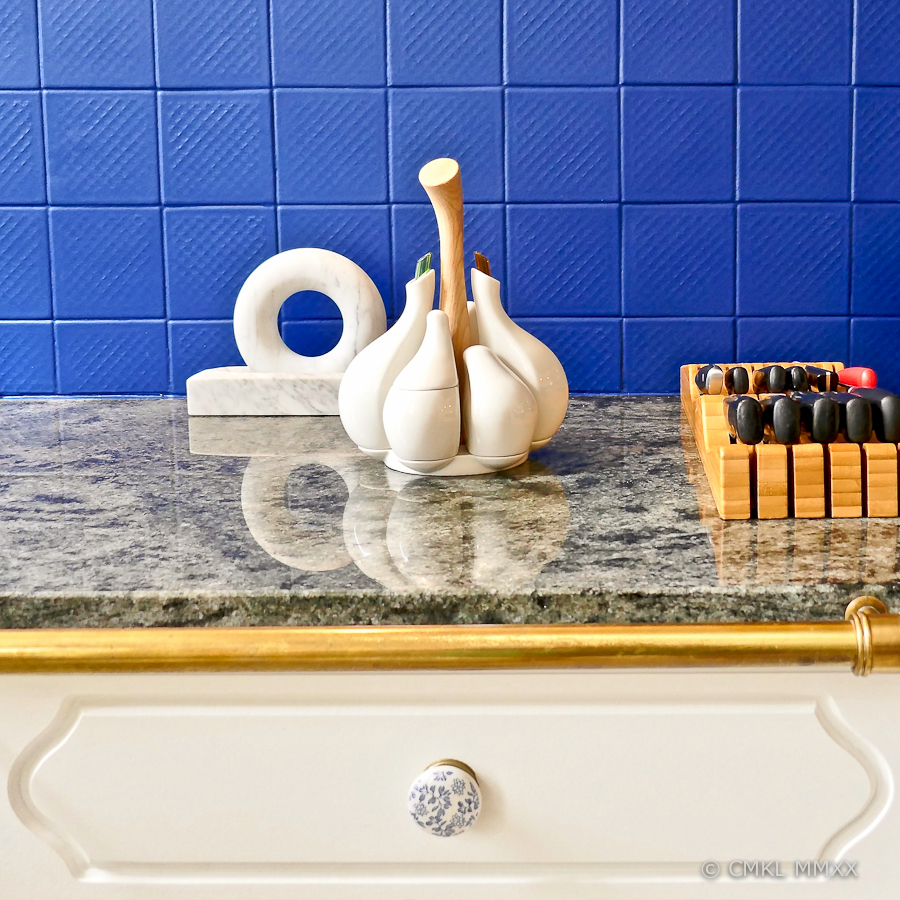 The vertebrae are still hovering in a waiting pattern. We shall soon enjoy their services, but it’s quite difficult to procure ingredients for a proper Asian meal, while we are still maintaining isolation.

The storybooks provided by photoAlquimia explaining the background, the design and the creation of Ajorí and Soytun are an integral part of the unique artisanal packages. 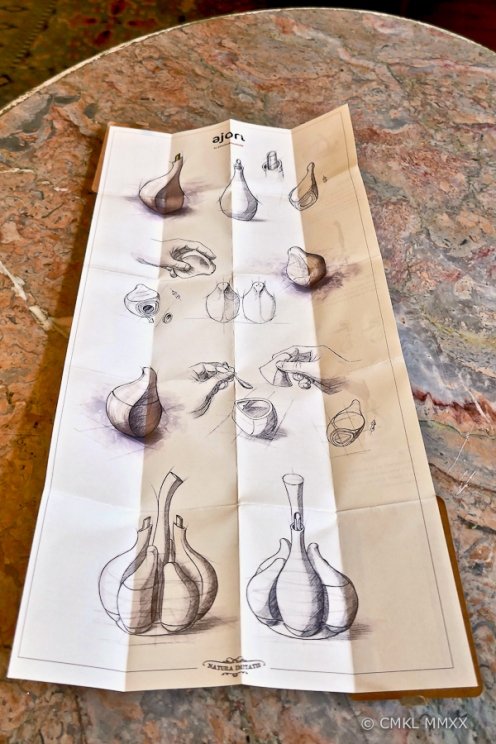 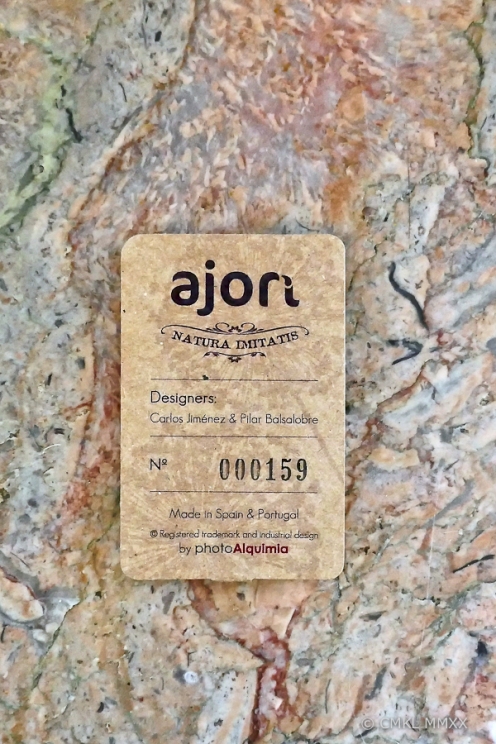 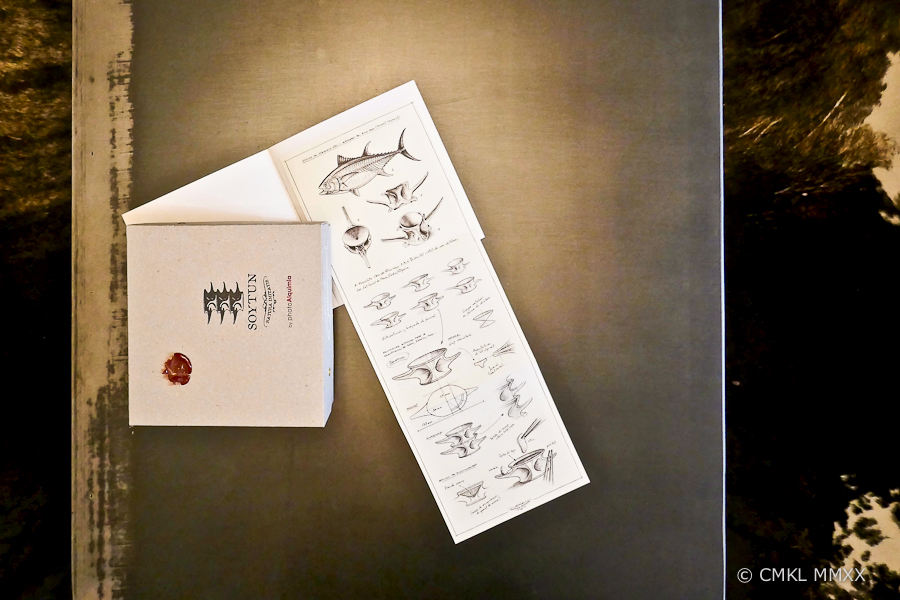 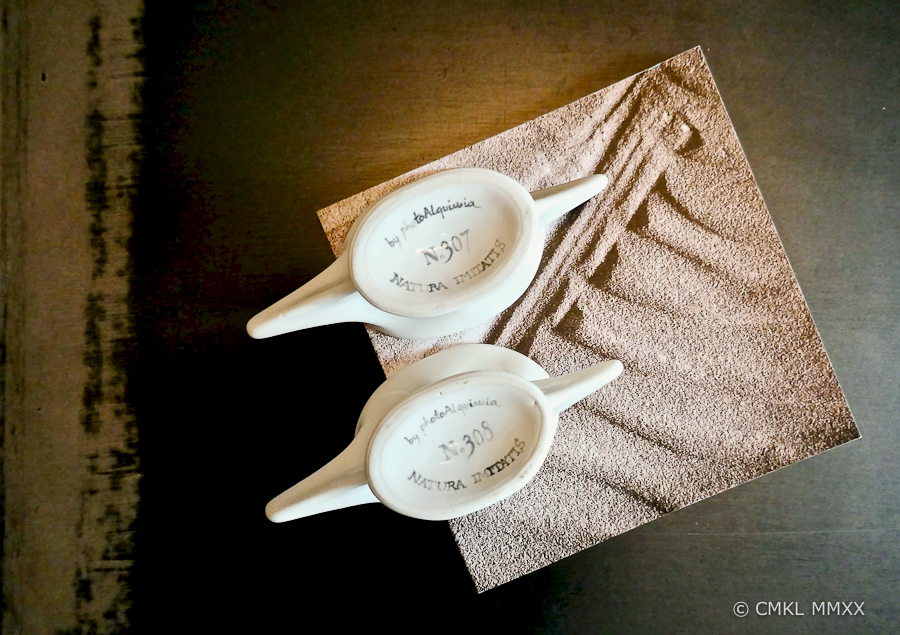 To follow the Soytun designer’s storyline of migrating tuna piercing the churning waters around the Rock of Gibraltar, I searched the house in vain for ocean-related photo props, when my eye came to rest on an item that once belonged to my late sister Diana, an endless chain of sandstone links. She was an artist, a trained sculptress, and a gifted painter. Did she carve this chain? I don’t think so, but there is no one left who might know for sure. What I do remember are our many shared hunts for seashells, driftwood, and polished glass along the sandy shores of oceans and lakes alike. I felt it was an apt association. 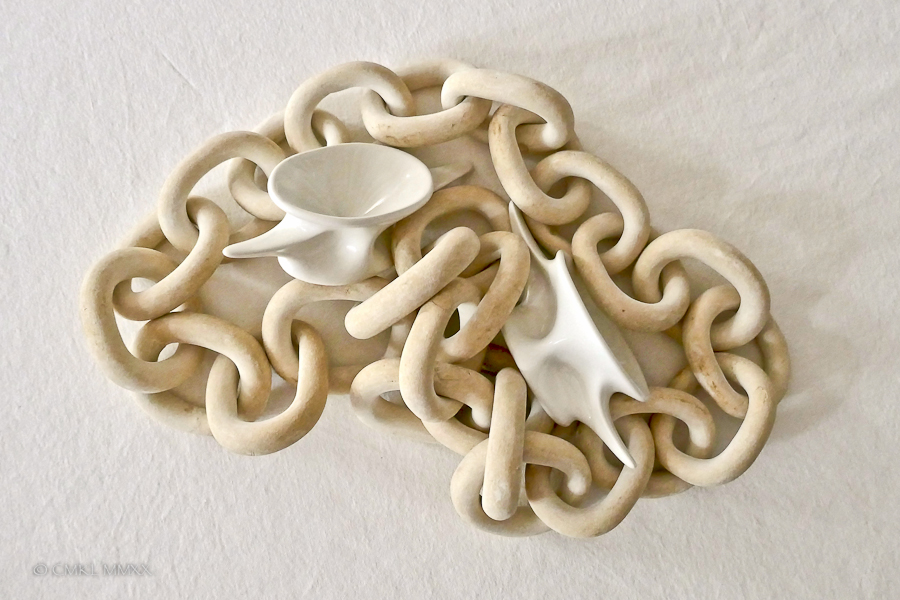 In late May, when I receiced the package from photo⚗️Alquimia, Pilar also provide an official Transylvanian Anti😎Vampire certificate linked to our Ajorí. I nearly forgot about this valuable tid-bit 🧿 of protection. 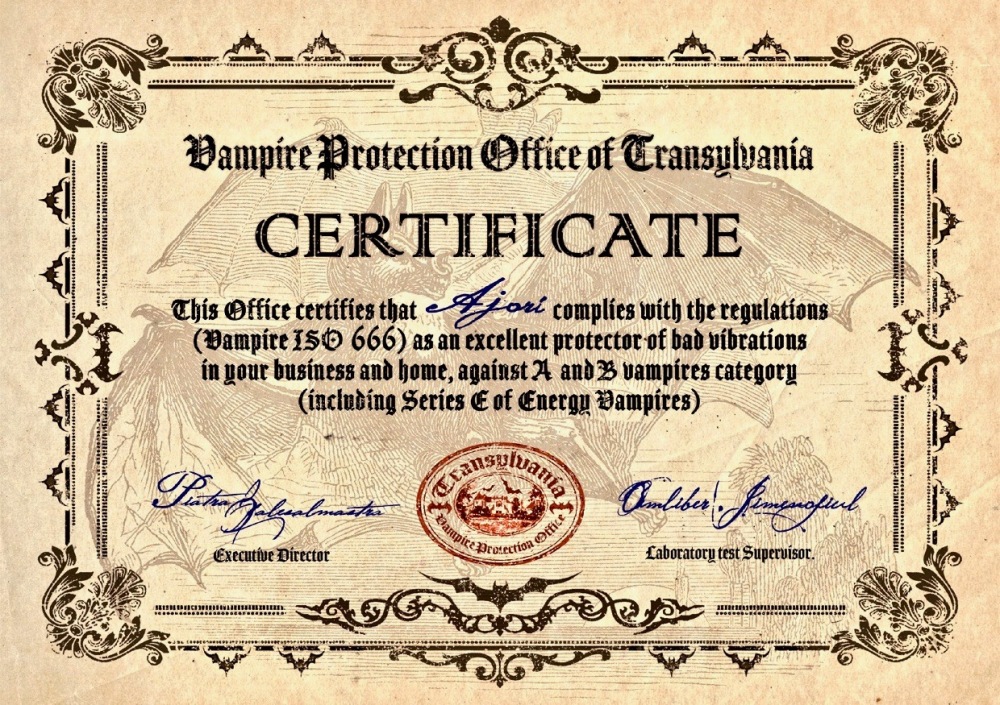