Wednesday I had an appointment at La Embajada de Alemania in San Jose.
… And for some strange reason, all my normal keyboard functions, like auto-correct, umlauts & accents and such, won’t work today. Bummer. I can’t spell in four languages, this is going to make me look like an idiot …
Anyway, I had this appointment, to ask for their help in my quest to petition the German Government, to allow me my continued Deutschness, while applying for US citizenship. Since I still adamantly refuse to drive into and in our Capital City, I ventured out on another bus trip.
Riding a bus is so fabulous here that I can’t stop myself from boring you yet again in excruciating detail about the whole process. To make it a smidgen more entertaining, I’ve added several images to enhance your Costa Rican travel experience during the one hour, mas o menos, ride from Atenas to San Jose. Fasten your seatbelt! Oops, there aren’t any …
First, you have to get your husband to drive you to the bus station for the 7:50 AM to San Jose. Then you queue like a Brit and wait till the driver opens the front door and one prospective passenger after another climbs up, to first pay the driver then select a seat. As you can see in the first picture, most busses are shinily well maintained. Many are personalized inside and out by their driver, who is also the owner. These owner-drivers are veritable artists on the wheel. Observing their driving skills on our narrow mountain roads, however, is a hair-raising event, which has lead to numerous suicide-jumps from speeding coaches – or so I’ve been told by fainthearted gringos, just released from the heart attack ward of Clinica Biblica hospital. Just kidding! In due course, always punctually, we leave Atenas on Hwy. 3 toward the town of Alajuela. 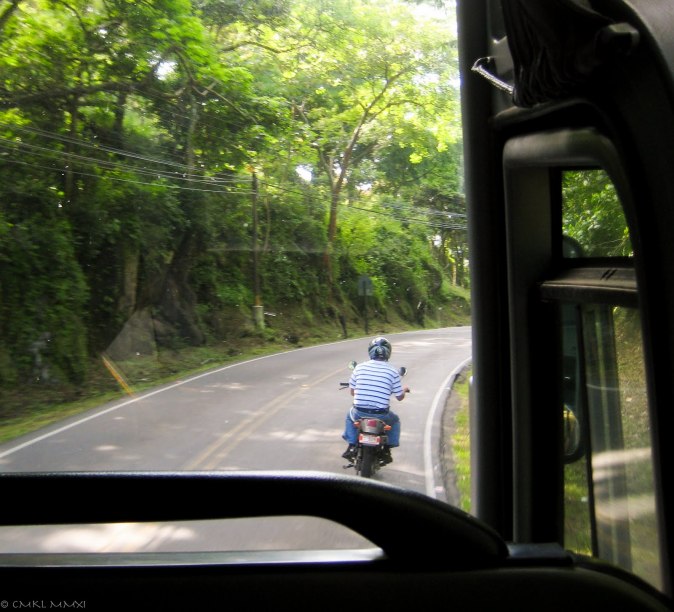 I was in the first-row window seat, a prime position to truly observe the action. From Atenas the road serpentines down to the town of Rio Grande, where you hang a left to continue in an easterly direction through El Valle Central. Often there are opportunities to catch breathtaking glimpses of gorges and volcanoes.

Or of beautiful parks and estates.

This is a typical countryside bus stop, or, una parada de autobús típica. 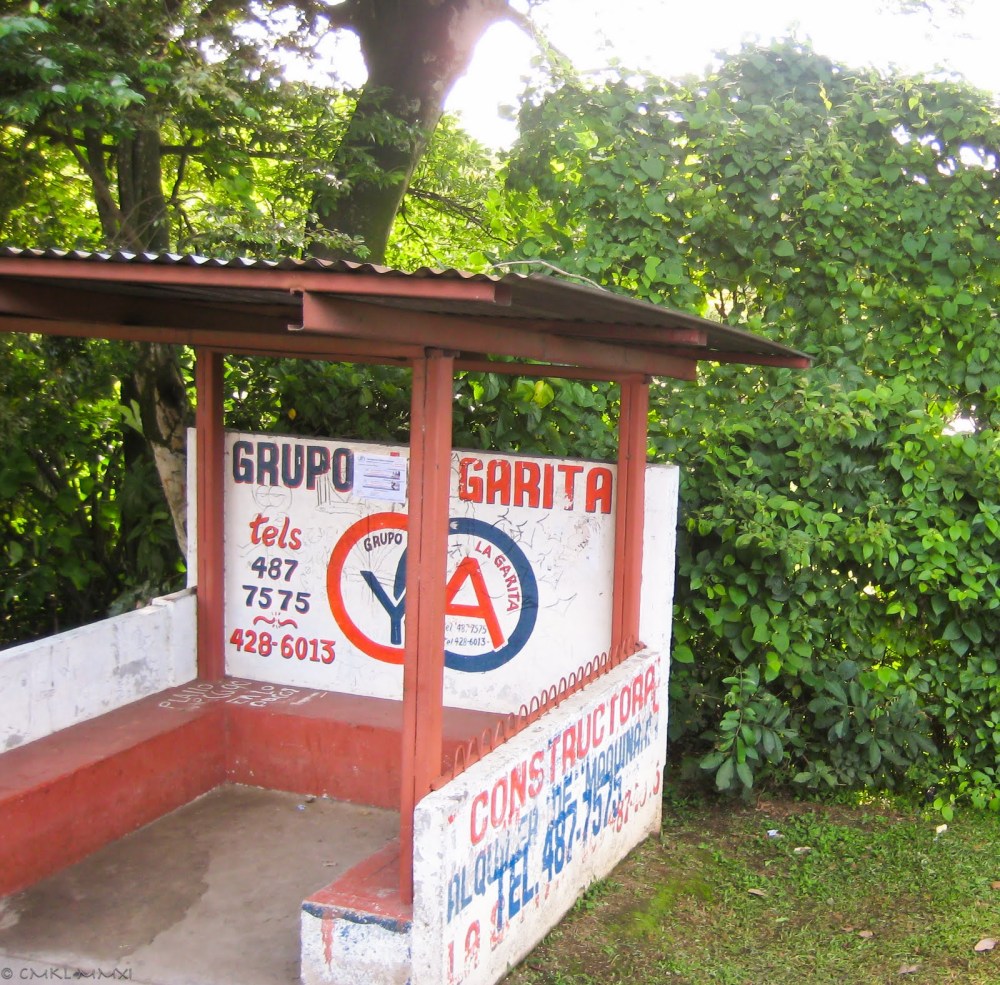 Whereas this is a most important specimen of a worker, without whom this country would be choked to death in jungle green within hours.

Este es un trabajador típico y omnipresente, one of the ever-present weed-whacker wranglers. During our green (wet) season, the whole country is trimmed, shaped and subdued by an army of weed-whacking guys. The countryside and our gardens, for that matter, are too steep to allow self-propelled machinery.
Grown organically makes for better crops, mejores cosechas. 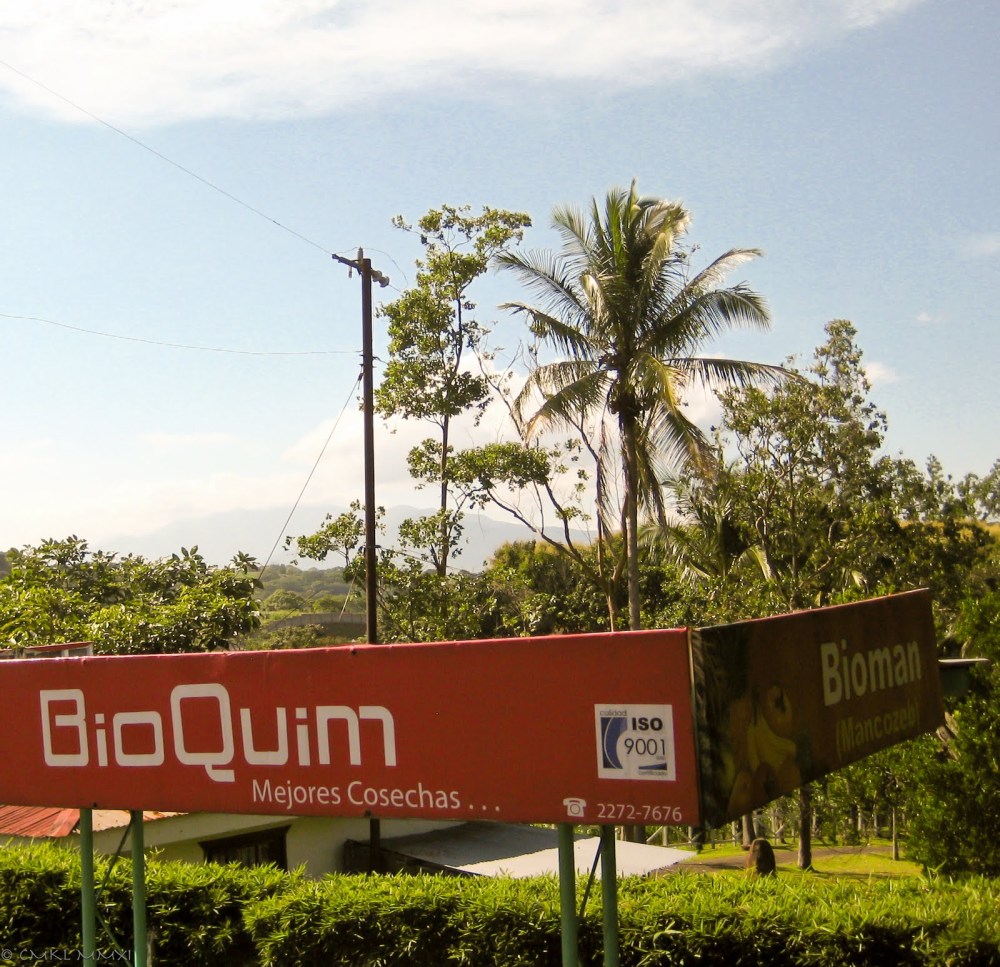 Our bus route from Atenas to San José doesn’t follow Hwy. 3 all the way into the town of Alajuela, nor do we visit the Poas volcano. Instead, we take the right fork onto Hwy. 1.

The legendary ‘Pan-American Highway’, which stretches for nearly 30 000 miles from Prudhoe Bay, Alaska to Ushuaia, Argentina. More or less anyway, one has to disregard the Darien Gap and a few other missing road surfaces here and there.
La Autopista Panamericana may be famous, but wide it isn’t. The sections over bridges narrow to two lanes and everyone tries to cross first. Quite the bare-knuckle experience! Costa Rican people are mild-mannered, gentle and tranquilo, but put them behind the wheel of a motor vehicle and a raging monster emerges.

The bus stops right next to the departure terminal, which makes it easy for travelers, who don’t want to leave their cars in long-term parking. When I tell you that this small country also has almost 40 domestic airports, it might illustrate the difficulty in negotiating our mountainous surface infrastructure, or the lack thereof, outside the fully developed, heavily populated, stretch of Central Valley between San Jose and the Pacific Coast. 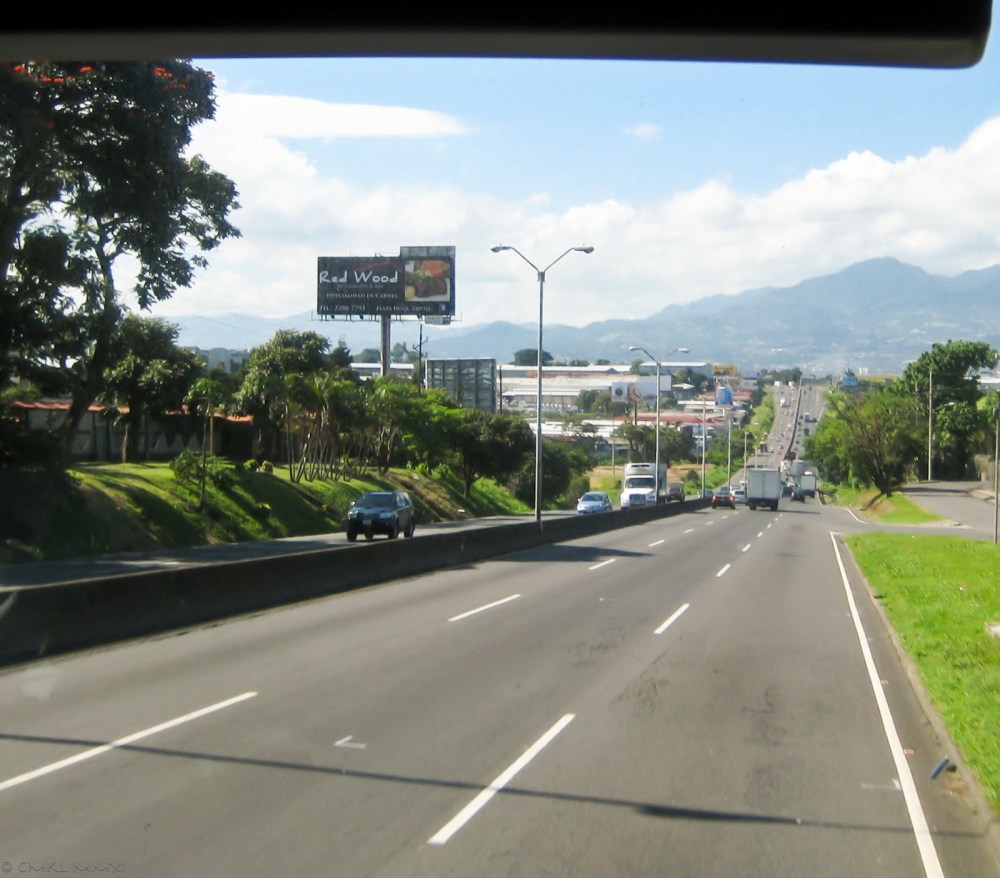 And here finally are the outskirts of the city! For a while we can even use a dedicated bus lane, zipping past the always have traffic. I’m not going all the way into downtown, though, because the Embassy is located in Barrio La Sabana.

Right across the street from the beautiful, 35 000 seat Estadio Nacional de Costa Rica, which was inaugurated this Spring. It was a ‘present’ of the people of China to the people of Costa Rica. But I suspect, the $105 mil. building cost will be amortized in other ways! The stadium is mainly dedicated to soccer, but also hosts other sports, most recently Special Olympics events, as well as entertainment. Shakira performed in April, Pearl Jam will be here in November. We’re so cool 🙂 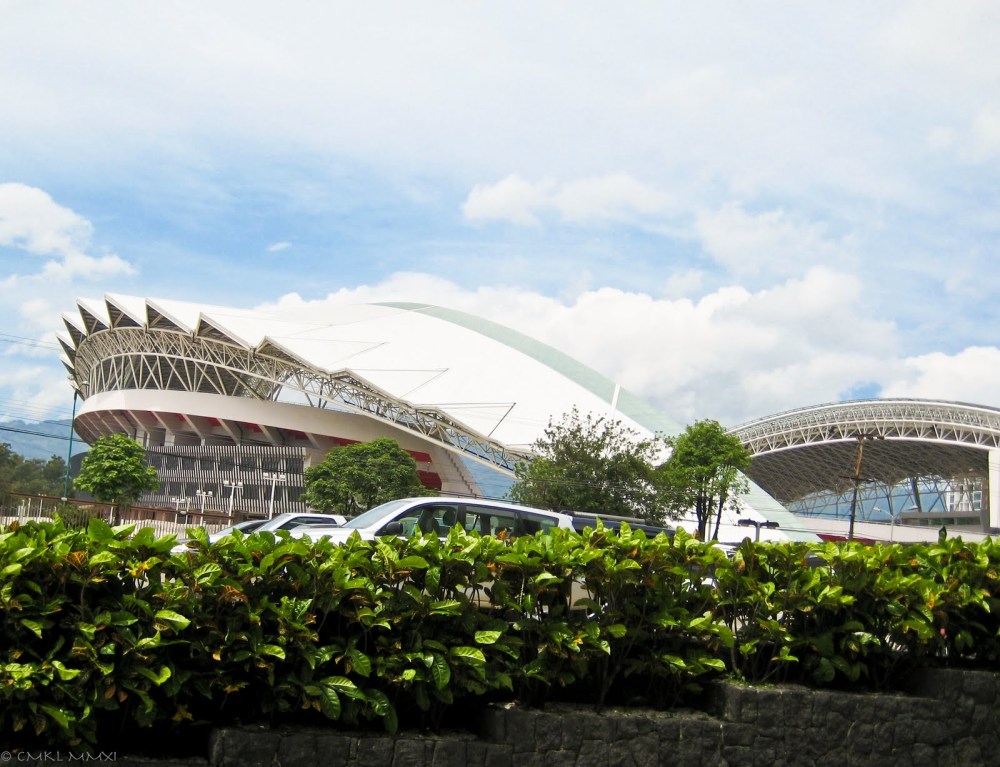 This concludes my riveting travel report. In regard to my application to retain the German citizenship … the verdict’s still out.

3 thoughts on “Love Them Bus Rides”