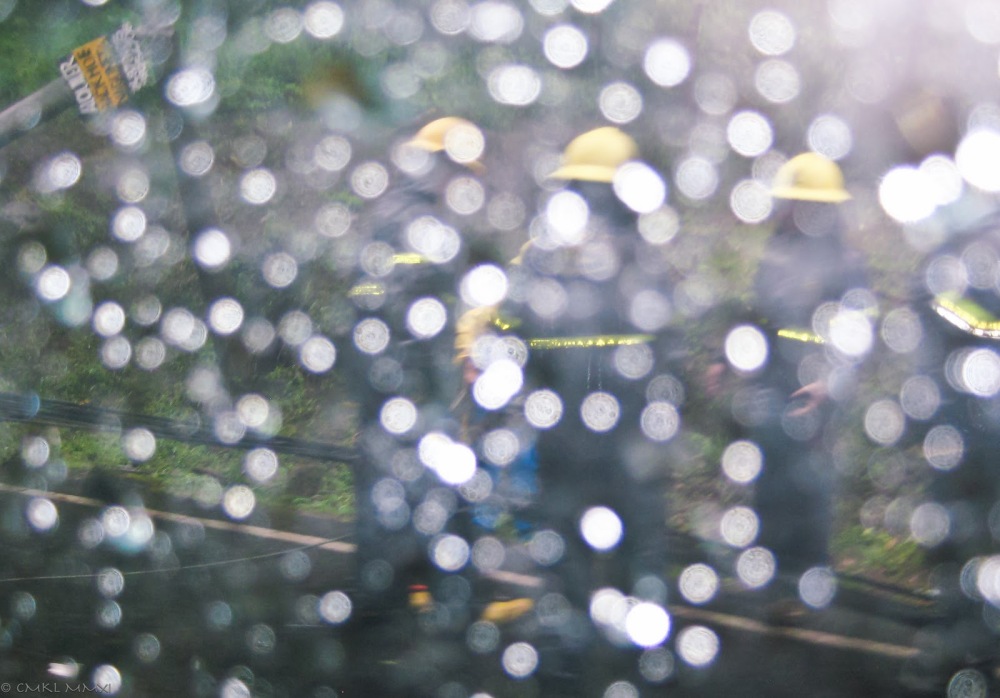 Coming back from Alajuela this afternoon, we had to stop a while on a switchback section of Hwy 3 between the town of Rio Grande in the valley and Barrio Los Angeles, the first suburb before you hit Atenas Centro.
For the first 20 minutes or so, we just sat there in the rain getting tired. We had enjoyed a very nice and leisurely lunch in a Peruvian restaurant. While Barry decided on fish with mushrooms, I ordered the goat stew in cilantro sauce. Well, I think it was goat meat. The menu said roasted lamb, but the Spanish menu called it ‘cabrito’ and we Hill Country cowgirls know and love our cabrito, at least in the form of Texas BBQ. It was just as good in a refreshingly citrusy version with white beans and rice. Both our meals were large and should’ve been followed by a siesta. Instead, we went grocery shopping in a very nice supermarket – after all one is supposed to shop while stuffed, to minimize impulse purchases. Hasn’t worked yet.

Twice our line of cars moved forward through a curve or two, only to stop again, engines turned off, windshields turning to blurry ripples of miniature waterfalls. And occasionally traffic would flow in the opposite direction.

Including those big busses. Each one of them filling our entire windshield, before, seemingly at the very last second, veering off to our left, whooshing by on the wet and slick tarmac.

There was plenty of time to look around and speculate about the nature of the traffic stoppage. Since we’ve experienced an unusually wet October, setting new records for rainfall and cloud cover density, landslides are an unfortunate hazard in this mountainous country.
Taking a picture of the downhill side of this temporary parking lot, I noticed an unusual object among the fog-shrouded tree scape, but only after uploading the picture.

It almost tumbled out of the picture frame and was as wet and blurry as everything else that afternoon. It appeared to be a wooden cross with a crown fashioned out of a gear wheel (or brake disk of a Formula 1 car?) with a bike chain curving partway around the crown, it’s long end dangling off over the crossbar. Of course, it could also just be a figment of my imagination.

As it happens, the world’s hardest and most prestigious cross country bike race will be held on November 2 through 5 this year. The ‘Ruta de los Conquistadores’ is tougher and more dangerous than any bike race should ever be. This wayside shrine could be a petition for grace and support for the riders, something well needed for the Ruta. On the other hand, someone living along this road may have witnessed more accidents than was bearable and created a memorial.
After about 50 minutes we were slowly passing the site of a massive slide, which had taken out several trees, road signs, guardrails and one of those tall concrete poles, and with it, huge bundles of overland cables. The guys of our national electricity company, ICE, worked very swiftly to clear the road and to repair the damage. They really are terrific. We were lucky to have had only a short wait – and even luckier not to have been passing there, as it happened …

One thought on “Passing a Calamity”