Skip to content
Posted on October 2, 2012August 29, 2018 by CMKL
After letting our dog dumpling hang out in the fruit bowl for a couple of days, the time was ripe, literally, to get rid of the Morinda fruit, which the kind vendor had given me at the feria in Alajuela on Saturday. As a Scientist i.R. (im Ruhestand = retired), I first had to look inside, of course. Wouldn’t you have done the same?

Since everyone wrinkled their noses at the mere mention of the word ‘noni’, as the Morinda fruit is called here, I decided to execute the dissection of this specimen under an exhaust hood – so to speak. I set up my lab on the tiled countertop of the small outdoor kitchen behind our guest casita. It faces NW, away from the house. There’s a strong breeze coming down the fog-shrouded mountain tops, acting as my ventilation system. And when you take just a couple of steps past this ‘breakfast bar’ and a border hedge, there’s a drop of 160 ft/50 meters or more down to the creek at the bottom of the gorge. The cadastral planes indicate a river as part of our property line, somewhere down there. However, the tropical moisture creates such a dense jungle as an ideal biotope for fer-de-lance pit vipers and poisonous sapo toads, that no-one has ever ventured, machete swinging or not, to the bottom of our gorge, to verify the existence of said river. But I can clearly hear it’s rushing and gushing whitewater, especially during the rainy season.
Since Saturday, the Morinda tree fruit had ripened to a glossy, almost translucent plumpness. It was high time to hurl this vomit fruit into the abyss! (pun intended) 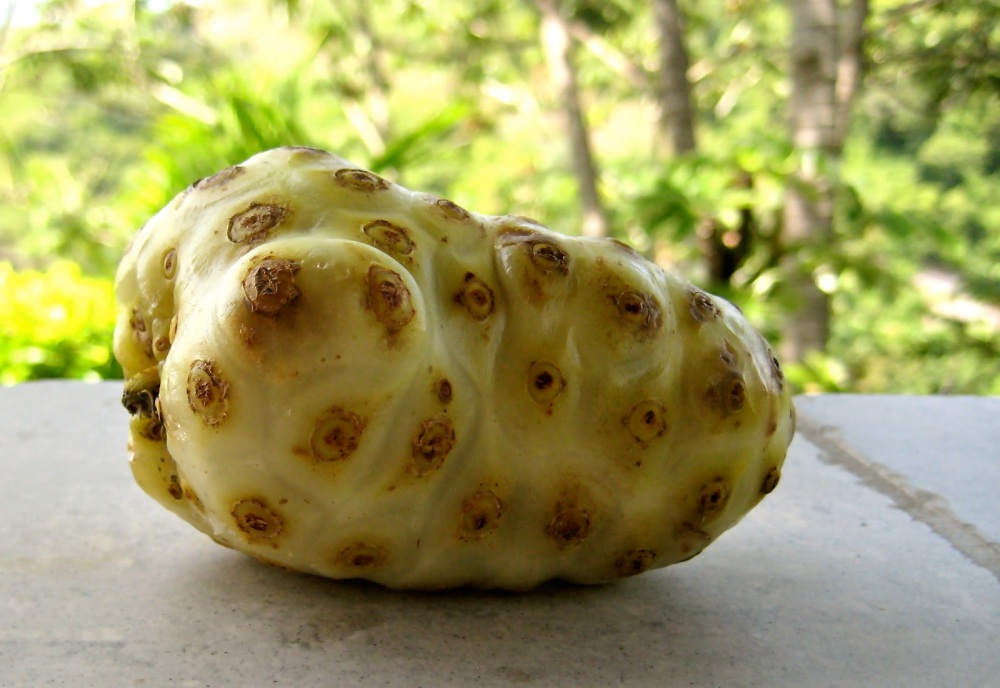 Using my extra sharp deboning knife, I halved the fruit with one decisive motion – quickly stepping back to avoid a possible release of foul odors. As it turned out, one actually had to bend toward the cut surface to detect a mild Tilsit aroma. Anticlimax! Ah well.

After studying the composite fruit organization for a little bit, I speared each half with the knife and tossed it in the general direction of serpents and sapos, while my little dragon watched the proceedings with curiosity.

When I inhale deeply, I can still smell the faint odor of cheese in the air. My amygdala must be fond of Tilsit …