Skip to content
Posted on September 30, 2012August 29, 2018 by CMKL
Saturday we switched our produce shopping venue from Atenas to Alajuela, the town that gives our province its name. We had heard, how much more extensive the market in Alajuela is, so we were eager to explore. The round trip from Atenas to Alajuela is about 20 miles or 32 Km, still much less than the one-way distance to the closest grocery shopping option on the ranch! The market is easy to find and there’s ample parking, costing 700₡ or US$1.40. You can either schlepp your purchases around or rent a supermarket style shopping cart for 500₡. La Feria is an important contributor to Alajuela’s economy. La Alcaldesa, the mayoress of Alajuela, estimated in 2009 that the produce market sustains roughly 600 farmers plus their dependant farmhands for a total of about 2500 people. I also read – the internet is such a marvel of information! – that an estimated 30 000 visitors are strolling the aisles every weekend. La Feria operates on Fridays from noon to evening and on Saturdays from 5:30 to 3h, más o menos. There are very nice and clean servicios sanitario. One purchases toilet paper for 200₡, which also pays for maintaining the impeccable facilities. [I’m still using my remaining surplus of tissue paper at home … cheap, cheap, cheap]. I’m merely mentioning all these details because I read a post on Facebook saying: “Die 4 Frauenprobleme! müde, hunger, pipi, kalt” [the 4 problems of women! tiredness, hunger, the need to pee (all the time), cold]. Cold is not an issue for us in Costa Rica, but the rest is certainly true!!

Let’s return to our Title Fruit, however. When I came across this quite inexpensive plant item ($1 per kilo), which I had never seen before, I asked the vendor, if it’s a vegetable. No, he answered, it’s a fruit. Ok, so, what do you do with it? Juice it in a blender, he suggested. He allowed me to take a picture of his display of this roughly potato-sized fruit and he also gave me one “Noni”, as he called it, to take home. To thank him for his present, we purchased very nice scallions from him.
Back in Atenas a friend cautioned: don’t cut it open, they smell awful! Googling ‘noni’ first gave me an Italian grandmother, but eventually, I arrived at the startling monicker ‘vomit fruit’, also ‘dog dumpling’ or ‘cheese fruit’. Hm.
The morinda tree is native to SE Asia, in the same family as coffee, actually, and it bears a composite fruit year round. According to Wiki, the green fruit, leaves, and roots/rhizomes were traditionally used in Polynesian cultures to treat menstrual cramps, bowl irregularities, diabetes, liver diseases, and urinary tract infections. It’s also called famine food – enough said.

There are thriving morinda tree cultivations and commercial noni juice productions, especially in Hawaii. Both the FDA and EFSA (Europe) are concerned about claims of health promoting and healing properties claimed by noni juice producers and distributors. It’s a good idea to be cautious with the consumption of noni products since it may lead to potentially fatal hyperkalemia. Also, watch out, athletes, you may get caught for doping if you use noni juice to boost your energy levels!
For now, I’ll let my dog dumpling gift rest with my maracuyas. But I won’t dare to cut it open. Eventually, I’ll toss it over the hedge down into the gorge as a tasty treat for the sapos grandes [bufo marinus] that live by the creek. The phytochemical properties of the vomit fruit combined with the hallucinogenic toxins our sapos produce might result in an interesting, possibly even marketable product. As a pensionada on a fixed income, one should always be open to commercial opportunities, right? 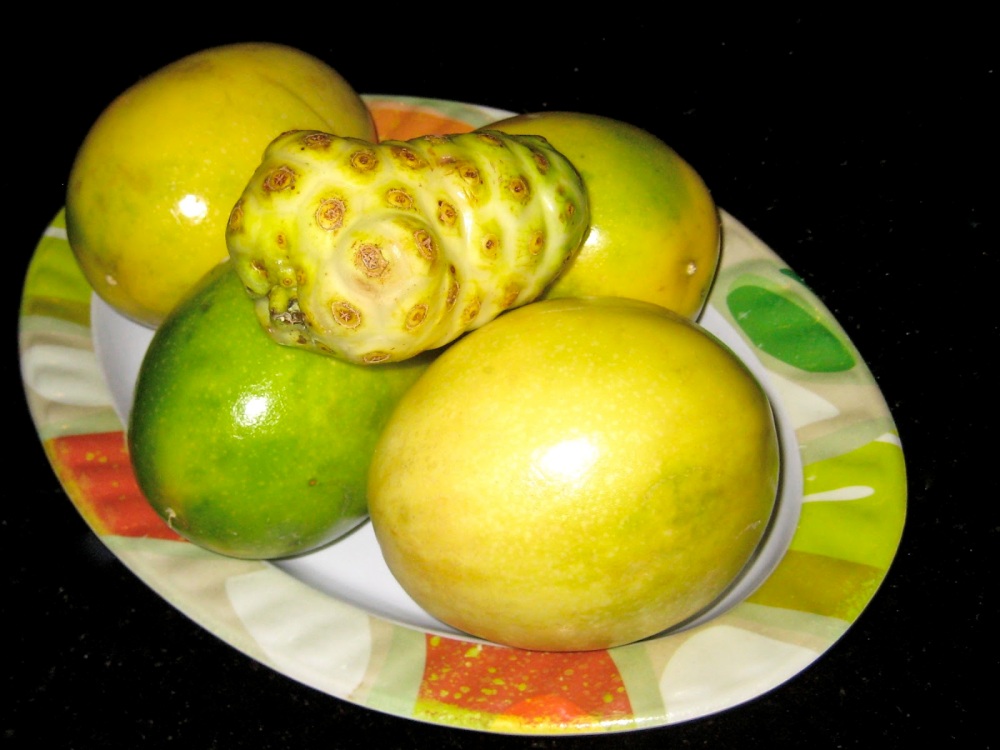