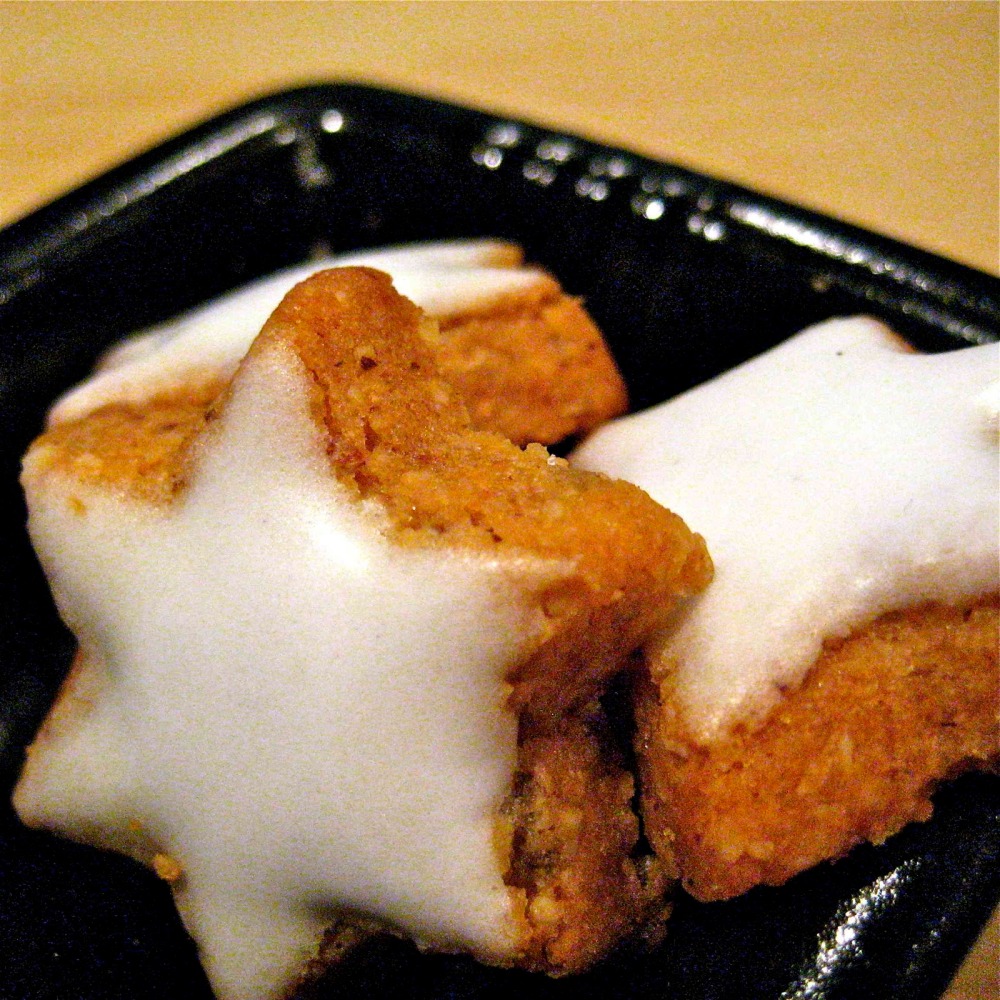 … let’s see, what will appear here today … playing my favorite recordings of cherished Costa Rican band ‘La Gaviota’ – those muchachos can sing! – for inspiration as I write. Sometimes I like to fill my room with music. It’s a small room, easily filled to overflowing with harmonies. I remember my grandmother enjoying music this way. In late afternoons, she could be found reclining on her living room couch, which was covered in an odd, pale chartreuse velvet fabric, her eyes closed, smoking a cigarette in a short, silver and bakelite holder, while being completely submerged in Rachmaninoff. She wanted to not only hear the music, she wanted to feel it with her whole being. I still keep her glass ashtray with its calf-shaped extinguisher as a memento. 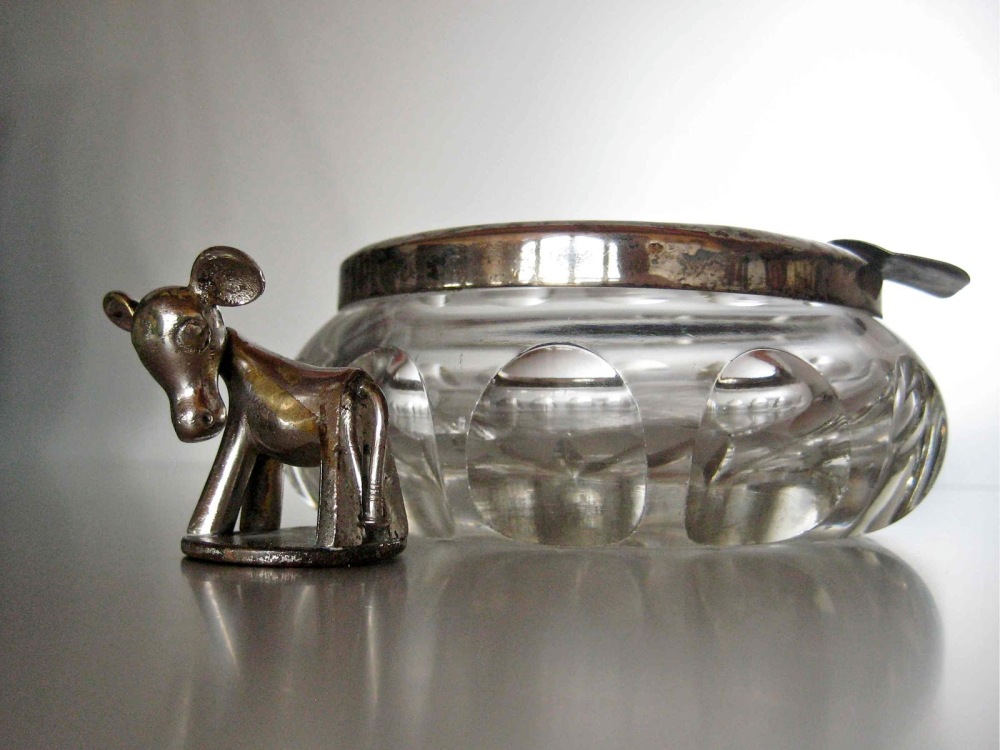 That timid little animal, with a tail fashioned from a nail, used to mesmerize and frighten me as a small child. I pictured it as the Golden Calf that caused Moses such troubles … 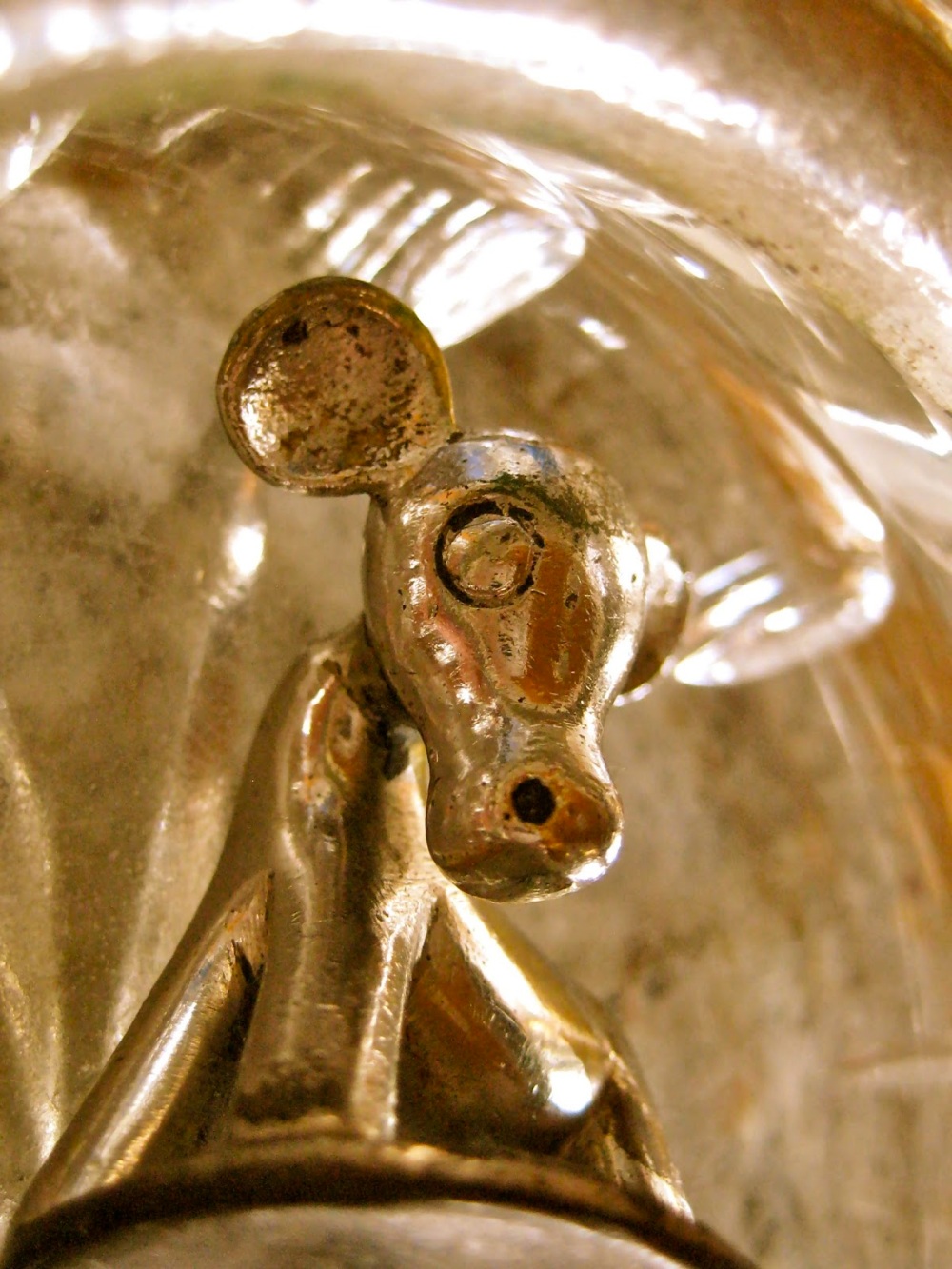 I’m older now than my grandmother was in these childhood memories. That, too, is frightening and has to be taken in hand through anticipation of exciting, fresh adventures in the new year.

During the next few days, I shall be pretty busy. Tomorrow we’re going to attend a very special performance of the original musical ‘Christmas at the O.K. Corral’ performed by the Divide ISD elementary students, written and directed by our friend and neighbor Marsha Knobel, a devoted musician and teacher. If you’re not already familiar with the Old West Saga of the O.K. Corral, do look up the link. It’ll give you an idea of the robust Cowboy Christmas Play, we’re going to enjoy! For a get-together afterward, I’m going to try to recreate a cream cheese and crabmeat dip that I used to serve decades ago. Come on over to the test kitchen tonight!

Saturday marks the beginning of the 2012 Cassoulet Challenge. This is a self-imposed three-day cooking event, in which the resulting dish, the before mentioned cassoulet, will be compared and judged against the cassoulet of world-famous chef and cassoulet-meister Étienne Rousselot. We last tasted his Cassoulet Imperial in 2009, now prepared faithfully by Étienne’s son Eric, at their family’s restaurant Hostellerie Étienne in Labastide d’Anjou, just outside Castelnaudary, throbbing hotbed of cassoulet activity.  I will do both cooking and judging, the latter with the help of my hungry cheerleading section, Barry, and some friends, brave enough to join us on Christmas Day. A traditional cassoulet is cooked in a cassole, the earthenware vessel, which gives the dish its name and which, through its shape, promotes the all-important surface crusting of a properly prepared cassoulet. To the best of my knowledge, there is only one single pottery in all of the United States of America, where they accomplish the difficult process of cassole throwing (I don’t know if that’s the proper term, but it sounds good). That is the Clay Coyote pottery in Minnesota.

As in past years, I shall follow an amalgamation of several traditional recipes of the Toulouse and Castelnaudary regions, leaning heavily on instructions from chef Étienne. No breadcrumbs to achieve a crust in my kitchen! Instead, one bakes the assembled cassoulet until a golden crust forms, which is then broken into small pieces with a wooden spoon and gently submerged into the delicious concoction of beans, duck confit and garlic saucissons, thus allowing moist beans from the interior to rise to the surface, where they will, in due time, form the next crusty layer, to be broken into pieces and pushed down … four to seven times in all. Impatient people never a cassoulet shall bake!! 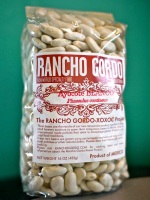 It isn’t easy to assemble some of the regional ingredients, required to prepare a cassoulet. Take the beans, for example. The beans of choice for a cassoulet are haricots Tarbais. A white runner bean, exclusively grown around the town of Tarbes in the Hautes-Pyrénées region, the birthplace of Marcel Proust’s favorite poet, Théophile Gautier and next door to the famed pilgrimage town of Lourdes. Traditionally the beans were planted in corn fields, not before May, allowing the beans to climb up the supporting corn stalks. Even in France this rare and labor intensive legume is expensive and over here it’s, well, pretty much crazy costly. For that reason, I invested in some research time to find a substitute bean. We shall see, how this year’s bean candidate, the Phaseolus coccineus or Ayocote Blanco holds up to scrutiny. Their producers, Rancho Gordo in California, promised great results and beany delights.

And how, you’ll ask yourselves, can she withstand such pressure cookery? With the loving support of family and friends … yah yah yah. Actually, it is the exquisite sustenance provided by my sister, who sent a splendid care package, including Dominosteine und Lebkuchen, without which no cassoulet cook possibly could survive! 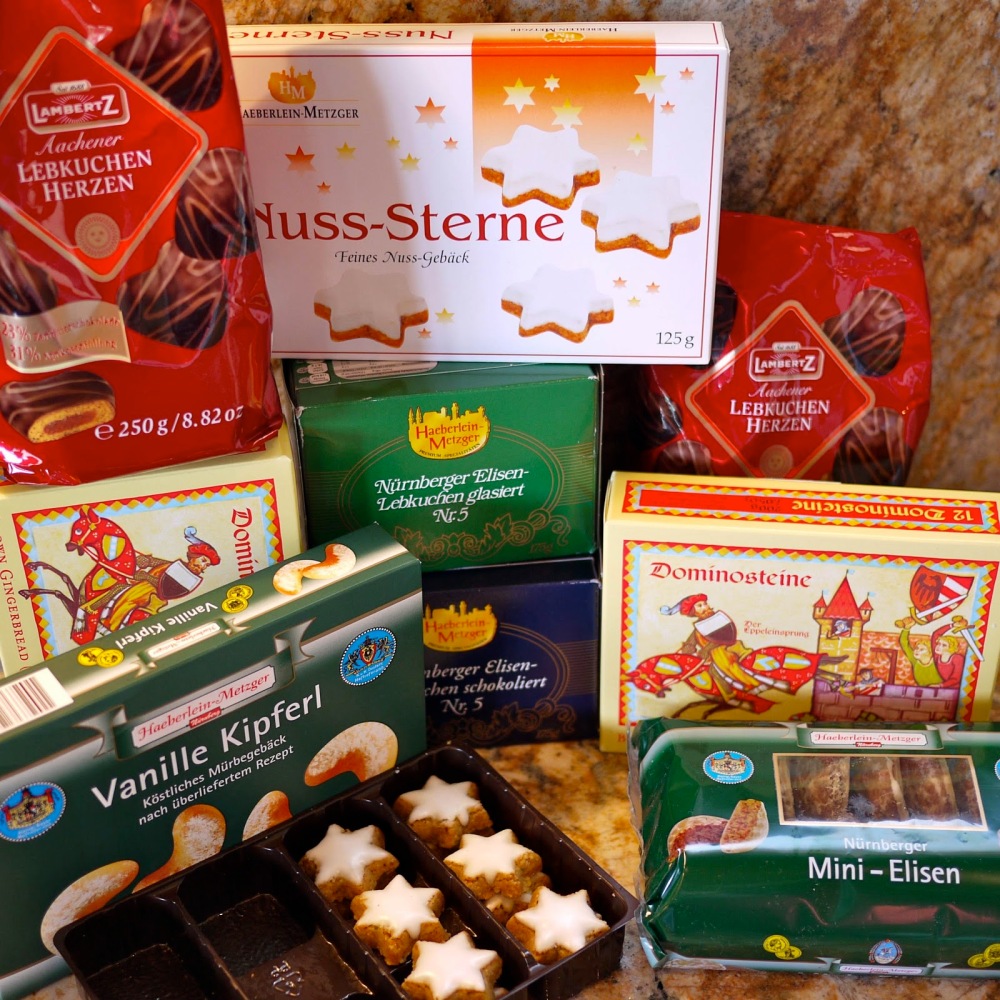 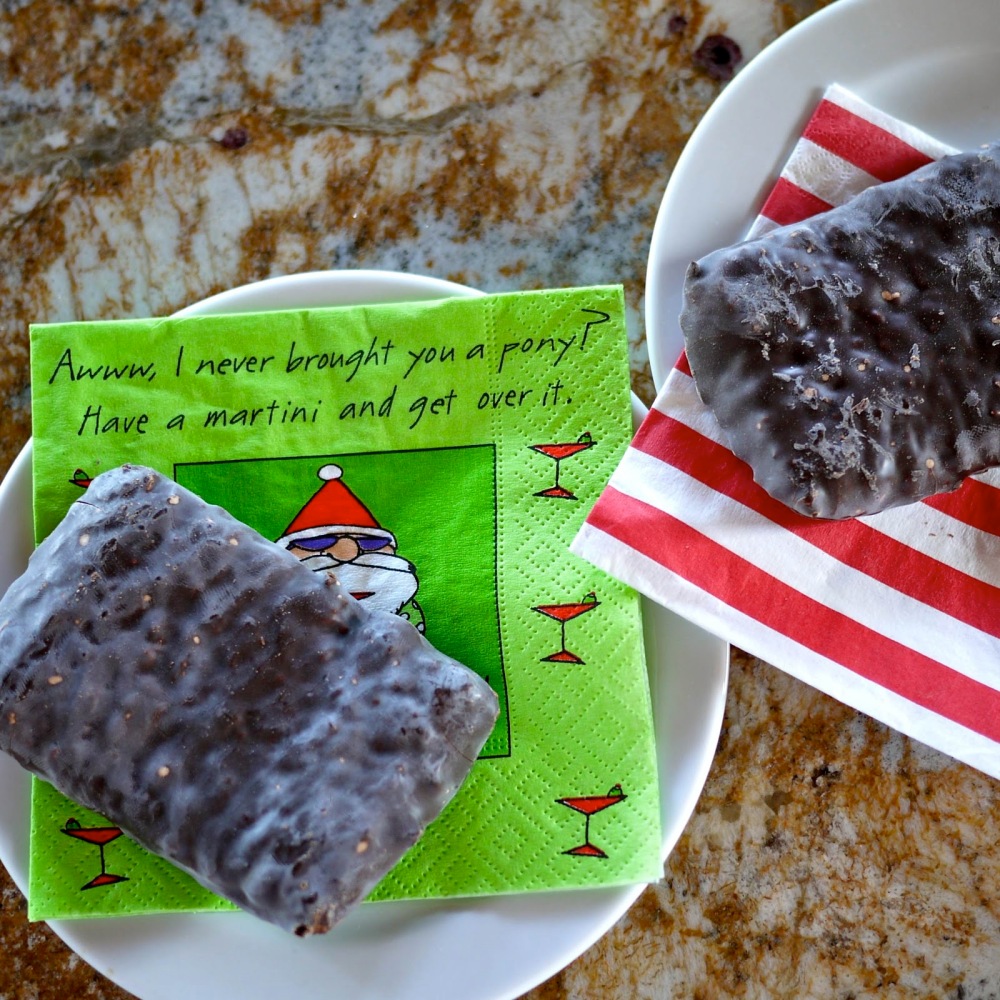 One thought on “Moses and the Cassoulet Challenge …”