In spitting distance to our excellent lodgings in Saintes’ rue Saint-Macoult, I stumbled across a most unusual area by happenstance. One passes near this mysterious place on the way down into the historical town center, for example, to go marketing at Les Halles, the covered market. It is called Le Belvedere, a promontory overlooking the old center of the town of Saintes with its cathedral of Saint-Pierre in one direction

and the St. Eutrope neighborhood with Les Arènes, the Roman amphitheater, and the basilica Saint-Eutrope in the opposite direction.

Le Belvedere is thus most centrally located and can be reached on foot from all left-bank quartiers or neighborhoods. There are gardens with benches for meditation and to just enjoy the views of this pretty city. It’s the location of the former governor’s palace and the ancient Hôtel-Dieu, a church-run charity hospital. The Logis du Gouverneur is just visible through this old gateway.

So far, nothing unusual to report … but did you notice the remarkably large “Saint-Louis 2030” poster? I was wondering about its significance, so I entered through the gate. Next, I found this mysterious, hand painted site-map covering a good chunk of wall to the left of the gate. 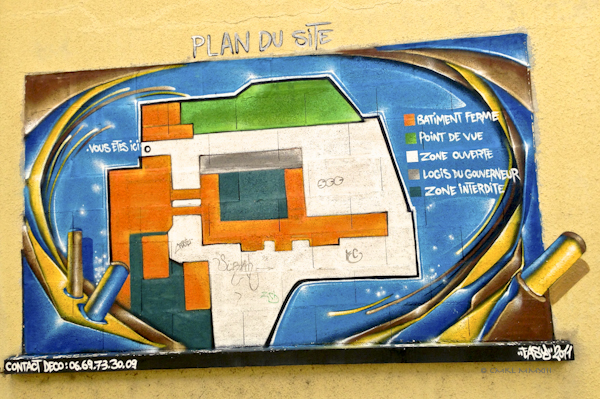 In some ways, it reminded me of instructions for a video or computer fantasy games. Was someone playing The Game of Thrones up here? If you put yourself on the “vous êtes ici” spot, looking in, you see the site-map on your left. On the right, you find windows boarded up with plywood, some elaborately painted, while the neglected governor’s palace lays straight ahead. The whole area seemed deserted, yet colorful. Very puzzling. What is this? 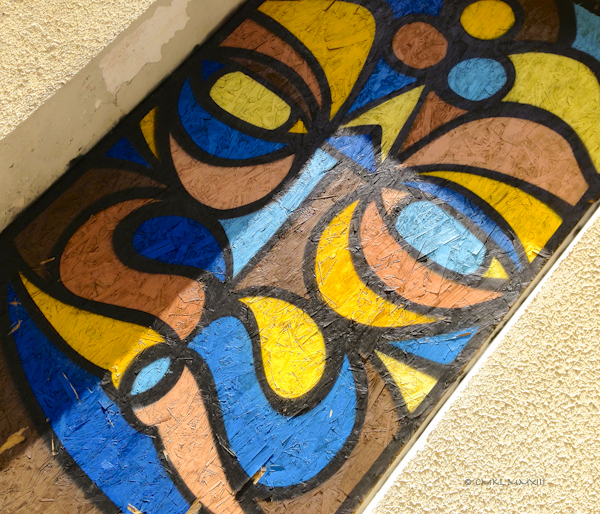 The odd juxtaposition of vibrancy and abandonment drew me closer. A few steps further in I turned right, just ahead of the palace. A quick look revealed half street half tunnel, where buildings were connected by multi-storied bridges with shuttered windows. And, such joy, most walls were covered with graffiti!

One tentative step after another released further explosions of color and form. Some more childlike and inexperienced, but eventually smart graffiti delight revealed themselves. 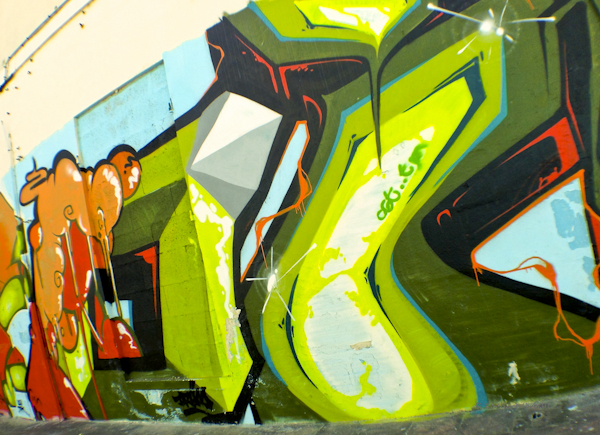 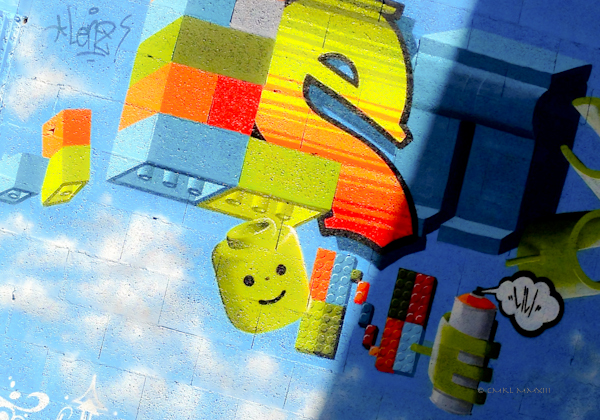 Stepping back out from the underpass into bright sunlight and looking to the right, I thought, I was dreaming. A three-story wall painted as exuberantly as the Sistine Chapel, well, almost.

Walking a few steps further, I approached the rear of the building complex, where the view opened up toward Saint-Eutrope and an array of beautifully blooming trees.

Then, upon swiveling back to the main building, another surprise disclosed itself. In a stark and unsettling antithesis to the pink blossoms, the entire, long rear facade was covered with an apocalyptic story of doom and devastation. 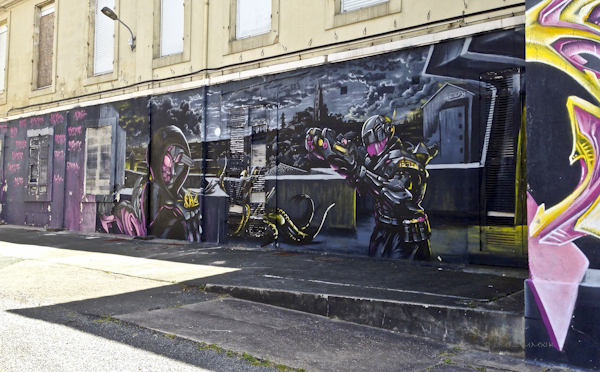 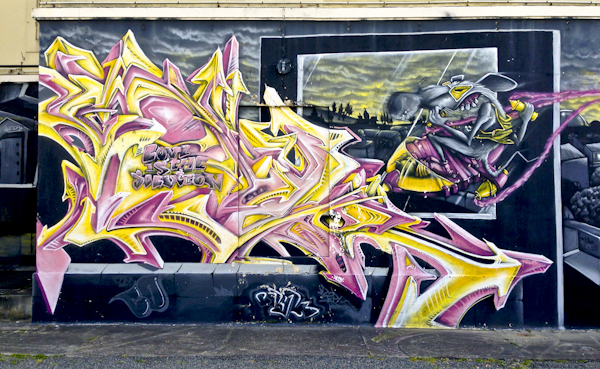 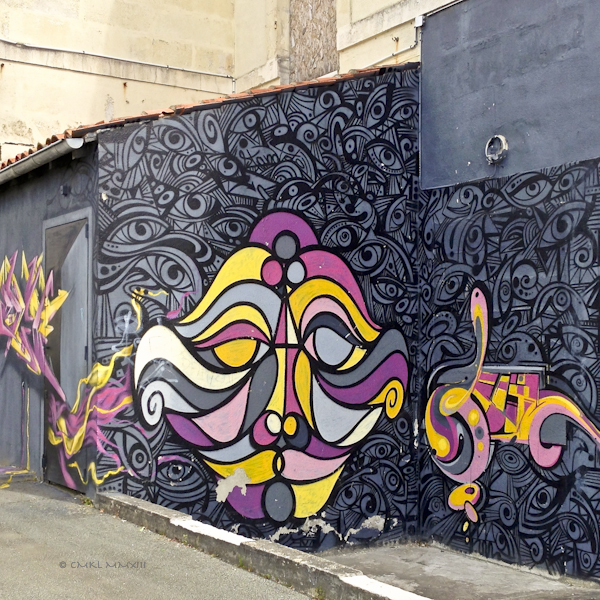 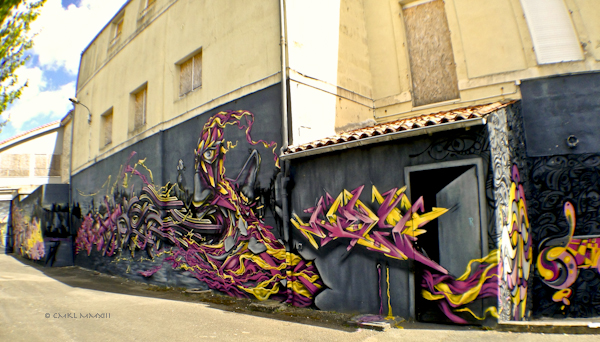 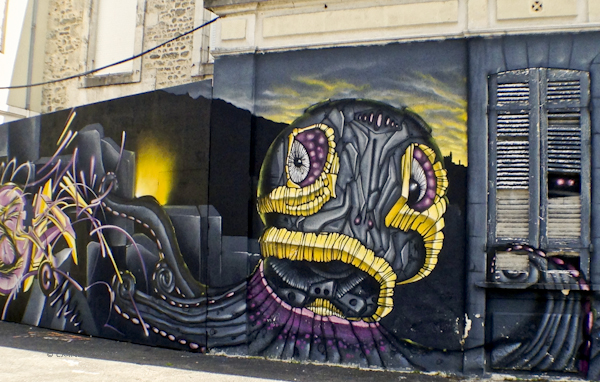 If you are like me and appreciate both graffiti and a well-executed apocalypse, you have to agree, this is absolutely delightful!
Later on, I found out that the “Saint-Louis 2030” refers to a plan to create an ecologically sustainable and future-oriented community development on Le Belvedere promontory, surrounding the restored Logis du Gouverneur. Unfortunately, funding has been slower than molasses and it’s quite unclear if this worthwhile project will ever even get started.