Skip to content
Posted on December 3, 2013September 27, 2018 by CMKL
Well, it’s been almost a month since I’ve talked with you. It was a very busy month for us, as our back-and-forth transitions from Costa Rica to the US, or elsewhere for that matter, are bound to be. We can’t just grab a favorite pair of flip-flops and jump on a plane because we have to get our property ready for our guests, who will enjoy Casa dos Leones, while we’re globetrotting.
Our first week back on the ranch wasn’t exactly a week back on the ranch. We arrived last Tuesday evening around 9:30, falling into bed pretty much right away. It had been a long travel day and fatigue lingered through Wednesday, when we drove over to Junction (a 56-mile round trip) to take care of some postal business for a friend in Costa Rica and, on the way back, we picked up a smoked turkey breast, which friends & neighbors had kindly hunted down for us. Thursday, Thanksgiving Day, saw us back in Austin (a 310-mile roundtrip) to celebrate with our children there, then back to the ranch on Friday, including a whirlwind swing through the grocery store in Fredericksburg, beloved German Gemütlichkeit Kitsch Town, which was filled to overflowing with tourists. We had to pick up a few badly needed basics, wine, cheese, bread, capers, and cereal. After all, we had been away for seven months and didn’t even have ketchup in the house. Naturally, we were looking forward to a peaceful weekend to rest and finally unpack our bags … when the phone rang mid-morning on Saturday. It was our real estate agent, announcing a surprise showing, necessitating further whirlwind action to put ‘stuff’ away, jump in a pair of boots and take a hike, literally. We disappeared on the land, while those strangers poked around our house. At least, we got some exercise! I’m happy to say, we concluded the weekend doing absolutely nothing on Sunday, well, a little laundry, but that’s it. 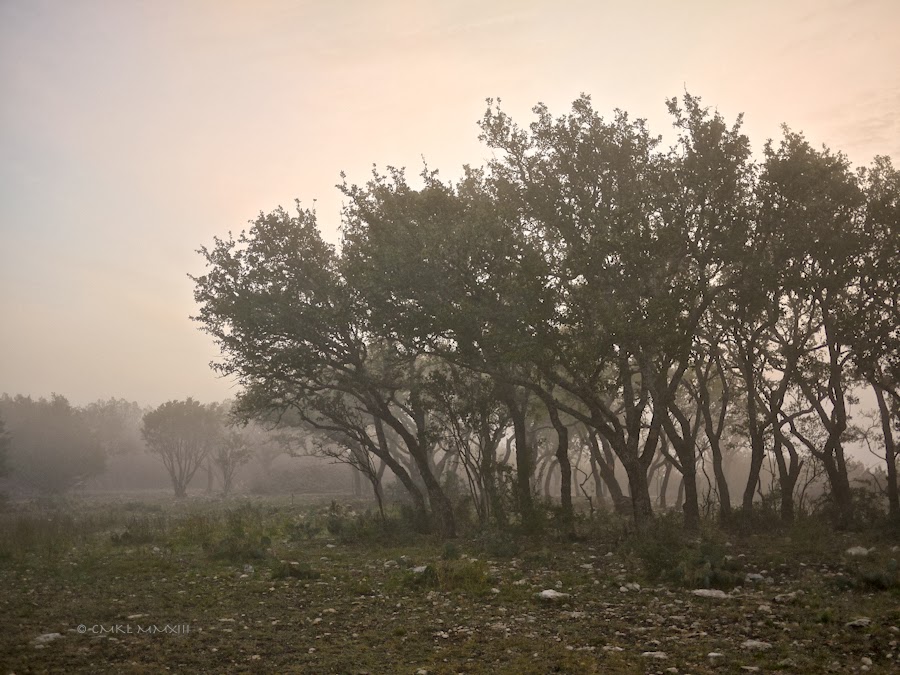 Recently we commissioned a crew to clear out dead ‘cedar’ in and around stands of oak around the house. It opens up the view very nicely, but the main reason is fire safety. In 2011, the peak period within several drought years, when Central Texas suffered through 12 months of no rain, no precipitation at all, our hills turned brown. Because for the first time in living memory even evergreen juniper bushes, which is the natural ground cover in Central Texas, dried out & died. We have a love/hate relationship with these shrubs, Juniperus ashei, we call ‘cedars’. Many people suffer from ‘cedar fever‘, a severe allergic reaction to the juniper’s pollen. And ranchers usually try to clear grazing lands of juniper, because cattle don’t like it. On the other hand, it (normally) keeps our hills looking nice & green year round and protects from erosion.
The guys who took out our juniper bushes build long berms, stacking the dead shrubs densely for future burning, which was on the calendar for today. Conditions were just right for a safe burn – as safe as open flames will ever be! It had rained quite a lot these last few weeks, so the burn ban for our area had been rescinded and today was the least breezy day in the forecast.
El jefe Barry went to work shortly after sunrise to light the first two bonfires. 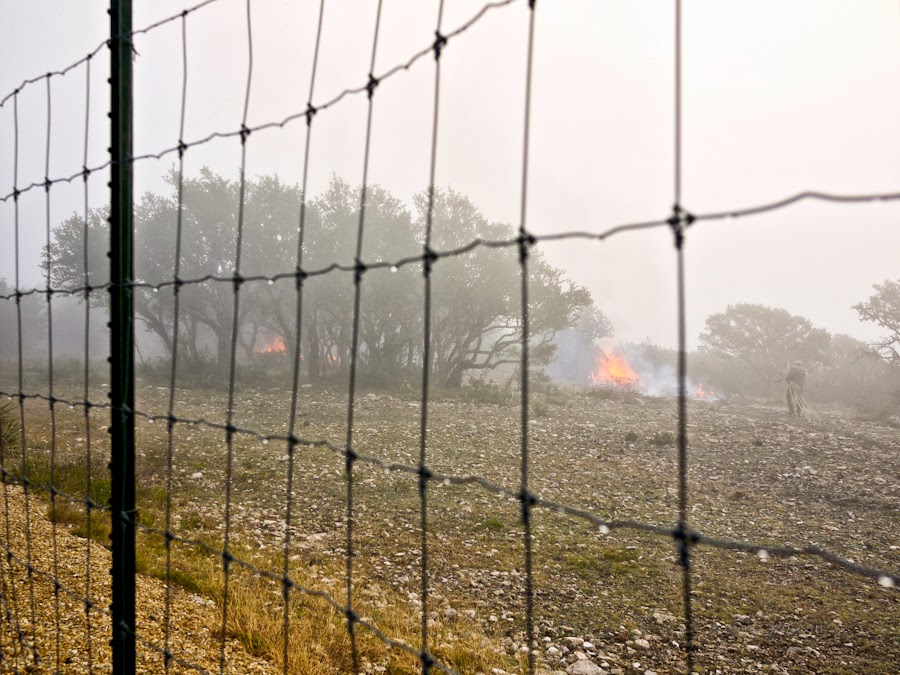 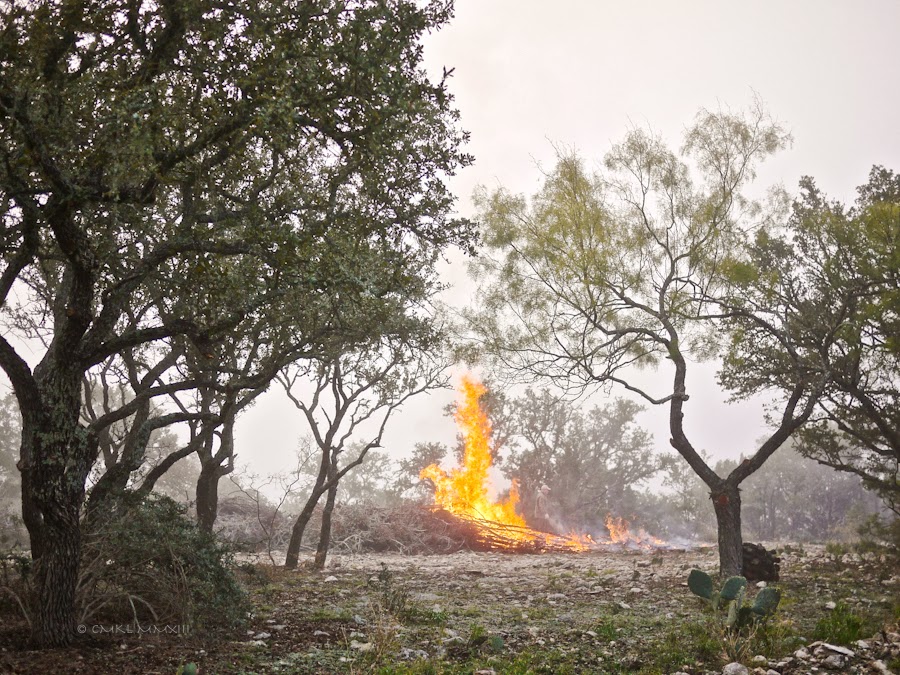 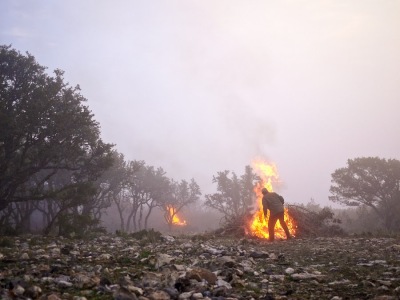 The next couple of hours were pretty darn hot & tense. The heat radiating off these dancing flames is incredible. Barry was working hard to keep the inferno in check, as well as collecting stray branches and throwing old, rotten boards into the pyres. He was wearing a very heavy canvas coat and pants made of double layers of extra dense & treated canvas, his chainsawing pants. They’re supposed to withstand the occasional, accidental light contact with the biting teeth of a running chainsaw. Really? 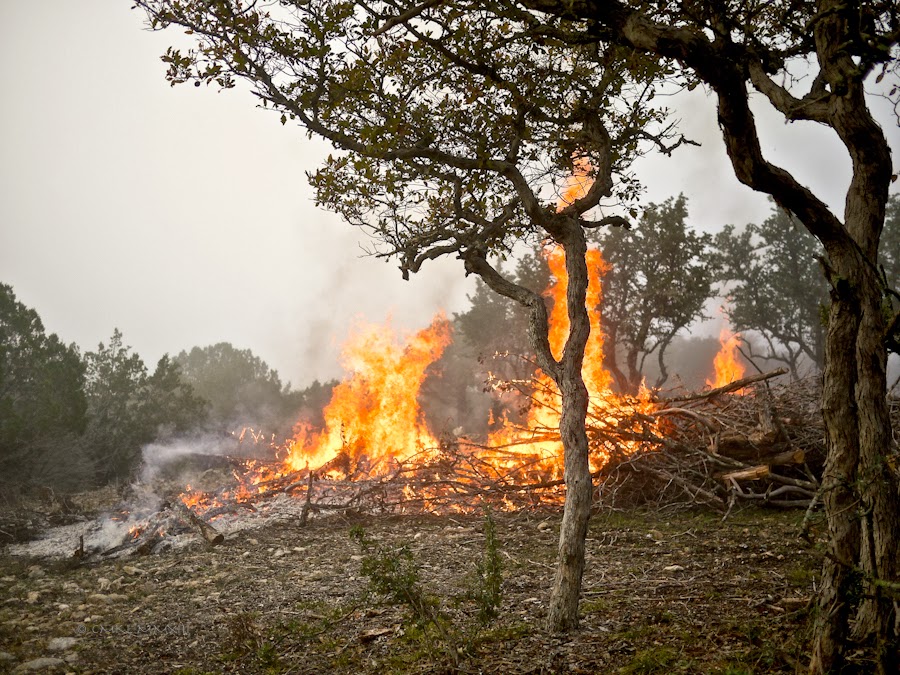 Just as quickly as the high drama of overwhelming heat and fury builds up and the loud roar of the raging fire and the sharp crackle of exploding twigs fills your senses – it is finished. The brittle fodder for the flames, provided by the large berms is devoured in record time, leaving only white smoke from smoldering hot spots dissolving into the still lingering mist. 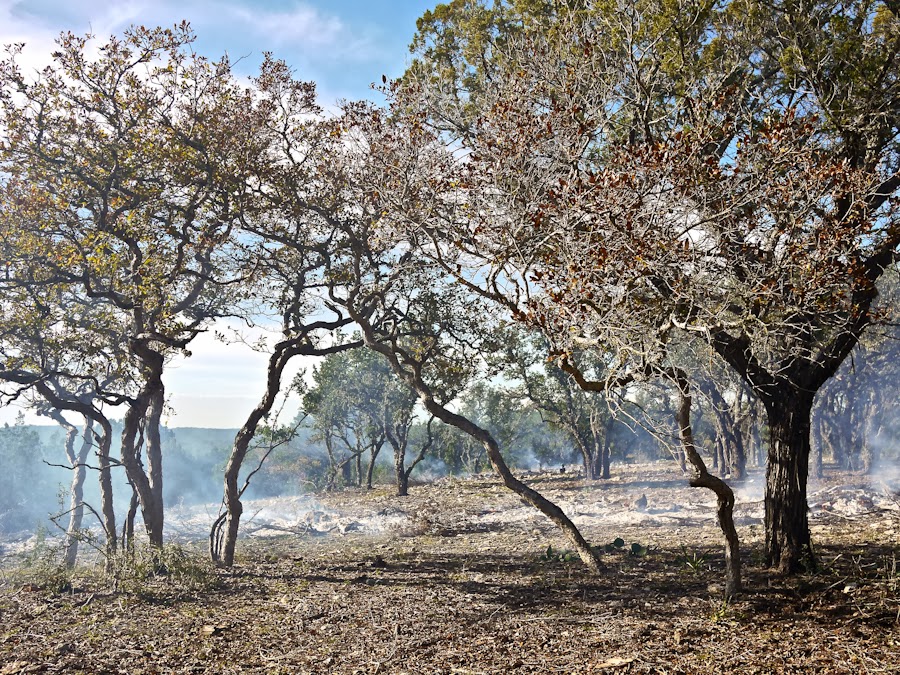 On to the next clearing and three more vast piles of juniper bushes! 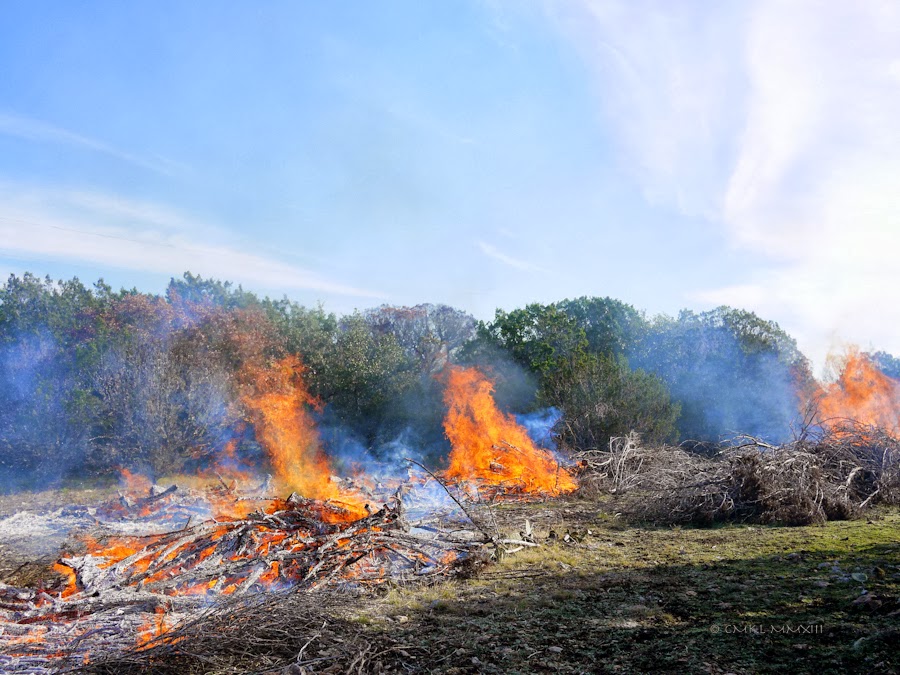 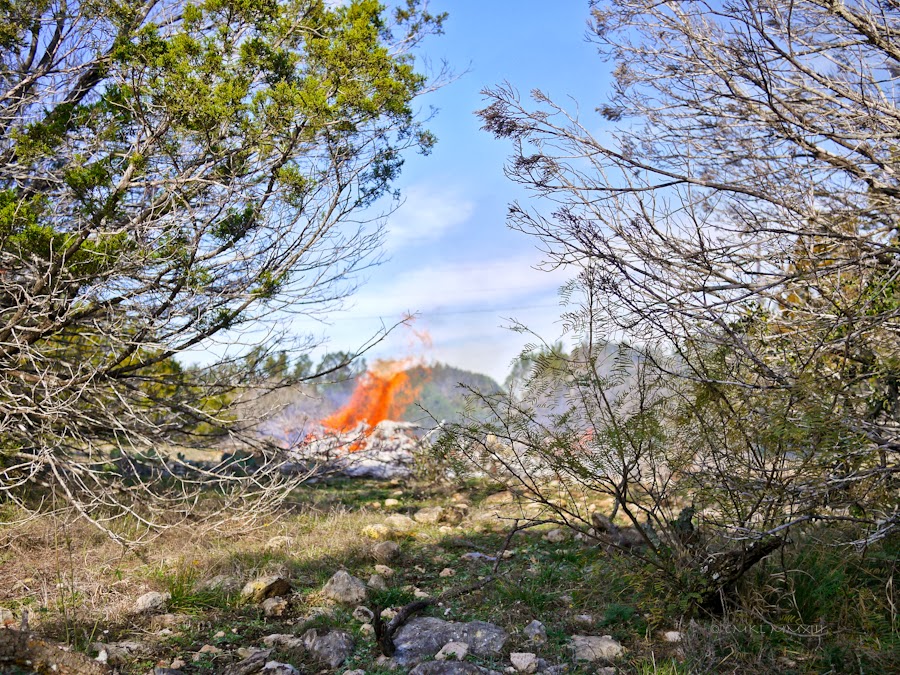 Everyone in Central Texas is wary of wildfires, which are the greatest threat to us in the more isolated areas. Firefighters have to travel long distances and they have to bring water with them, as fire hydrants are a city slicker thing! We have wells near our houses and in some pastures, too, and they all have connectors for fire hoses, but there’s rarely enough water to fight a serious fire. In our neighborhood, as in most ranching areas, we have a protocol in place for controlled burns and our Coop also acquired a decommissioned pump truck to be ready for the ever-present fire danger.

As quickly and violently as the fire consumes the dry material offered, less than three hours after the first swoosh of ignition only wispy smoke remains and the occasional swirl of white ashes floating over the ridge.

3 thoughts on “Bonfire of Necessity”