In the nineties, the nineteen-hundred-nineties that is, we searched long and hard to find land for our future retirement. Even though we lived in Michigan at the time, we focused on Central Texas for our dream acreage. Our attachment to Texas and our desire to live there again was very strong. Neither one of us had any ancestral claims to Texas, my husband being of New England Jewish stock, while I hail wholly from Europe. But our hearts were beating strongly in the rhythm of country music, with a few barbecued ribs thrown in. 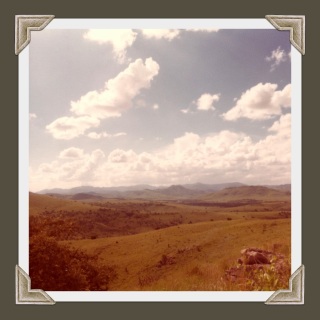 I began my American life thirty-six years ago in Fort Worth, Tarrant County, Texas and I fell in love with the huge sky and endless horizons on a road trip to West Texas over my very first Memorial Day weekend ever in 1978. These four faded photos are relics from that memorable trip out West. I call myself a Texan-by-Choice since then. 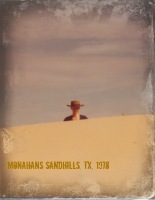 The Sandhills of Monahans, the Davies Mountains, Big Bend National Park with views clear across the Rio Grande over the Chihuahua high desert. Nothing but space. Clusters of mailboxes here and there along the roadside. Stillness. 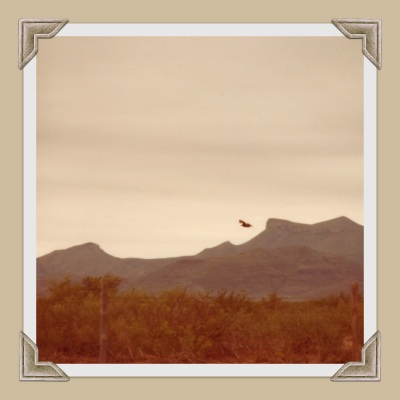 If you look at a map of Texas and you stick a pin into Austin, our beloved Capital, City of Music, Culture and Fast Cars, Nature and Education, and if you then turn your eyes westward, you’ll notice county names like Hays, Blanco, Comal, Kendall, Gillespie, Kerr, Bandera and so forth. That’s the “Hill Country”, the very heart of Texas. Gentle slopes, dry washes, lots and lots of juniper bushes, crippled oak, mesquite trees, and cacti.

Though we had looked at land in the Hill Country occasionally, those had just been half hazard attempts here and there, whenever we happened to be in the vicinity. We finally launched a serious land search during one of my May semester breaks in the mid-nineties. My sister Diana joined me in a furnished apartment in Austin, which we rented for exactly one month. She and I were the scouts and our mission was to ferret out a piece of land of at least 20 acres, hopefully, more, where Barry and I would build our future retirement homestead.
Our search was as methodical, as it was exhausting. This was well before the dawn of lazy google searches and dropbox photo shares. In the evenings we would sit on the dining table, bending over large-scale maps spread out in front of us, to find the locations of tracts mentioned in promising land sale ads, which we found by searching through rustling newspaper pages made of actual, flimsy paper with smudged ink, rather than today’s online listings. Of course, this was before the advent of mobile phones as well so I could call land agents only from the apartment landline to set appointments for viewings. Whereby ‘viewing’ is really a grave misnomer for the expeditions we undertook on a daily basis.

Land, plots, tracts or acreage come either unimproved or developed. Developed means that someone has altered the natural state of affairs. There may be a structure like a barn, a stock tank, a well, a half-finished driveway, or, of course, a house. But improved properties were much too expensive for us, we were looking for plain, unimproved land. And on those pieces of land, well, you’re on your own! We often fought our way through shrubs so dense, we lost all sense of orientation within the first few steps. I remember clearly standing in a jungle of ferociously thorny vegetation one day, next to an agent expounding the merits of a gorgeous, if distant lake view …. “once the brush is cleared”, all the while simply hoping to get out of there alive.

Our days started around 6 AM with a quick wake-up cup of coffee so we could sneak out of town before rush hour traffic clogging up the freeways, as is usual for Austin. We would typically drive one to two hours to meet our appointments in gas stations, roadside diners or intersections near the desired viewing location. Sisterdale, Comfort, Dripping Springs, Bee Cave, Wimberley and Buda (not the one in Hungary, mind you) became household names for us. We viewed properties in Marble Falls and along the Pedernales River near Johnson City and even an especially sweet spread overlooking Lake Travis on the edge of Austin itself. Unfortunately, this particularly gorgeous piece of land was also dominated by one of these massive high voltage towers, situated right smack in the center of it – that’s what made it affordable. Anyone, who has ever been house hunting, knows how frustrating these ‘cons’ can be! We were working hard to accomplish our goal, but it wasn’t easy. Each night we discussed and noted down the merits and faults of that day’s properties and after the worksheet was balanced, we had to eliminate most candidates. Fresh bagels with lox smear from the corner deli only partially compensated for many disappointments.
After almost three weeks of searching through the Hill Country for “our” piece of dirt and recording only five serious candidates on the plus side, we saw an ad for land sales in the YO Ranchlands. The tracts advertised were located an hour further West than we had ever looked before, but I made an appointment anyway. The drive seemed to take forever and then some. We even discussed turning around at one point but decided to give it another five minutes further, before giving up. Just a few more bends in the road finally brought us to the promised landmark, the turn toward the main gate of the well known Y.O. Ranch, which was purchased in 1880 by Captain Charles Schreiner. A few generations later, the Schreiner family took 11 000 acres of their northern pastures and turned it into the ‘YO Ranchlands’, a community of small parcels of at least 50 acres each. But as my sister and I slowly covered the 8-mile distance from front gate to ranch headquarters, where the sales agent expected us in the, believe it or not, Chuck Wagon, we didn’t know anything yet about the history of the ranch or its owners.

It was still early in the morning, around 9 o’clock, when we were driving toward the Chuck Wagon, the warming sun to our right throwing long shadows alternating with blinding brightness. Negotiating the narrow lane, studded with patched and cratering potholes, crossing over dry washes and rounding blind corners, took much of my attention. Nevertheless, the peaceful atmosphere of these vast pastures was evident, except when the car noisily rattled across one of the cattle guards, separating different sections of the ranch from each other.

What happened next, I shall never forget. This was late May, just a little past the height of the wildflower season in Central Texas. The previous winter hadn’t been especially wet, so the carpets of riotous blooms one sometimes finds along the roadsides were sparser that Spring, but wild Texas sage, Leucophyllum sp., covered a large, open area to our left. A sea of purple blossoms glowing in the sunshine, in the midst of which a group of zebras grazed, floating like apparitions in a cloud of purple haze. Being a child of the Sixties, the connection was inevitable … as was purchasing land. 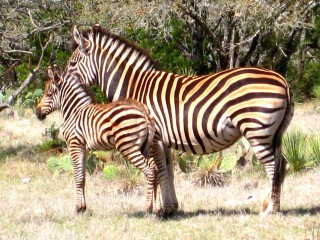 Purple haze all around,

Yeah
Purple haze all in my eyes
(free after Jimi)


A while after our land purchase, I was interviewed by writer Lorie A. Woodward for her feature called “Imprints on the Hills” in the Texas Farm & Ranch Magazine.

In her article, she detailed the history of the Y.O. Ranch and five generations of Schreiners. She also mentioned in her article that my indefatigable sister and I viewed more than 60 properties or tracts in eight counties in 30 days. Actually, it was less than 30 days, because during the last few days of our one month lease Barry joined me in Austin so we could make our final decision together, while Diana had to return to Munich & work.

One thought on “El Rancho Leon”