Skip to content
Posted on April 28, 2014October 2, 2018 by CMKL
Our mildly nerve racking move-in was followed by an annoying and completely unexpected termination of city gas services to our house, which in turn was trumped by a highly irritating delay of Internet services. But all this is behind us now and the no doubt amusing stories about these snafus may be retold at a later date when we’re all able to see the humor hidden in these vexations. For now, we won’t dwell on it. Instead, we’re following a program, which was established a long time before we ever knew, if and when we might be moving to France.
Last year we had agreed to a series of home exchanges in Europe, stretching from roughly mid-April 2014 into June. Two consecutive exchanges were planned for France, followed by one in Sweden and the last one was scheduled for Hamburg, Germany. In a Home Exchange, you live in someone’s home, while they enjoy your place. I have to elaborate on this fabulous way to experience other cultures and sights some time, it really is the most amazing way to travel.
The most current major events in our lives however complicated our exchange schedule to some degree. Fortunately not for our exchange partners, though, since we’re exchanging our place in Costa Rica, so nobody was inconvenienced through our sudden move to France. Just our own timing was a bit, shall we say, tight. Moving into our new home cut our first exchange period in half, and we will have to forgo the visit to Sweden. It’s just too expensive after our move and we also have to spend more time at home to take care of things there.
Last Saturday we finally jumped into the car and drove nine rainy hours from Saintes, Charente-Maritime, to Vence, Alpes-Maritime. We passed by a number of well-known landmarks, including the forbidding silhouette of the Black Mountain on our left and the still snow-capped Pyrenees mountains to the right, before glimpsing an old friend, the medieval outline of the Cité de Carcassonne. 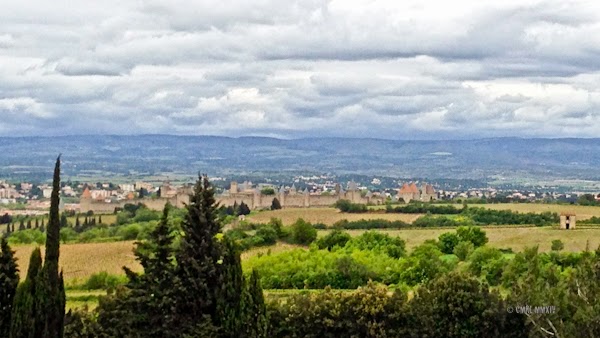 Following Carcassonne, we drove through endless vineyards of the Corbières foothills, whilst the landscape gently changed from ruggedly mountainous to windswept coastal. As you drive along the excellently maintained, hugely expensive toll road, you notice that tree branches point in the same direction and all trunks lean drunkenly eastward. The wide valley of the river Aude, which runs from the Pyrenees mountains past Carcassonne to the sea near Narbonne is infamous for its never-ceasing winds. And soon we got to see the Mediterranean Sea, if only ever so briefly, as we passed the city of Narbonne and it’s sadly unfinished Cathédrale Saint-Just-et-Saint-Pasteur, one of the tallest churches in France. 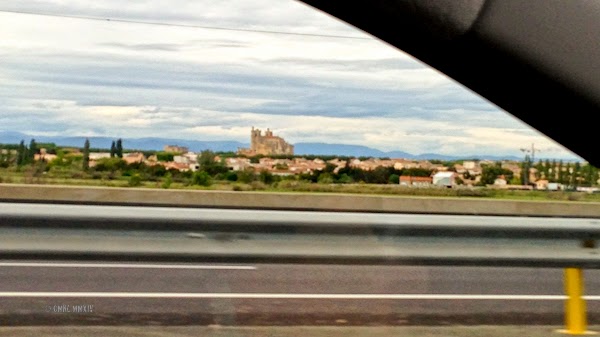 Driving along the Mediterranean coast toward the Rhône delta, we passed a few additional of the historically important cities in this region, like Nîmes, Arles, and Agde, many having been founded originally by Greek or Phoenician merchants or veterans of Roman armies serving in the provinces of Gaul more than 2000 years ago. Eventually, we made it to Cagnes-sur-mer on the Côte d’Azur, right between her more famous sisters of Cannes and Nice, where we turned into the mountains to find our exchange home in the town of Vence.
Have you ever negotiated unknown mountain roads in a pitch-black night? Or tried to find an address in a sprawling village of narrow one-way streets? On a Saturday night after 10 PM? I don’t recommend it! Google maps and our instructions were in a serious disagreement when fortunately the owner of a just closing pizza joint pointed us in the right direction. After that, we were on our own in the search for the actual house. Our vacation domicile was supposed to have a distinctly painted gate, which was impossible to miss – yet we did again and again, before stumbling across it by sheer chance. Curvy hillside roads, bordered by the thickest hedges anyone had ever seen make for a not very entertaining nightly hide and seek game …

We slept well after that adventure!
The next day dawned rainy and stayed that way, until mid-afternoon, when we finally gathered our fortitude and walked over to La Vieille Ville, the ancient part of the village where we played gawking tourists.
Even before we got to the old town, we enjoyed our surroundings. This arch, a leftover, just sitting there, is only one example of the rustic atmosphere. 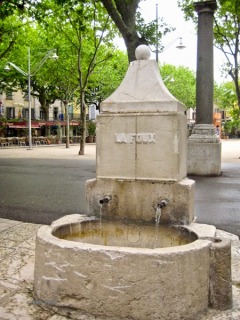 And the many fountains, which supply the citizenry with crystal clear spring water.

And electric cars tethered to their charging stations like horses to their troughs, such interesting vistas everywhere!
Finally, here are some of my impressions of the walled Old Town of Vence

And looking through one of the gates outside of the walled Vieille Ville, we spot ‘La Victoire’ and settle down for a bottle of wine and daube de boeuf, a hearty beef casserole for dinner. What a pleasant and relaxing time we had! 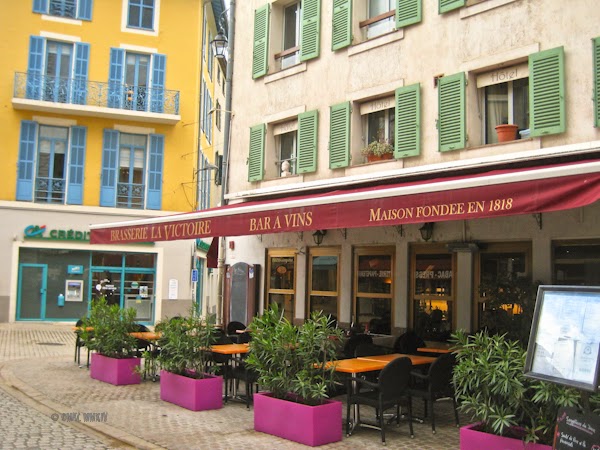 One thought on “Walled City Vacation”