What a glorious day! We’re enjoying beautiful summer days, often right here on our veranda, being entertained by all the activities playing out right below us on the banks of the river Charente and on the river itself, of course.

During the season, the City of Saintes has two large excursion boats moored directly across from us on the right bank of the river. They’re conveniently close to the Syndicat d’Initiative, otherwise known as the office of tourism, where visitors receive information on town and region, or how to rent a bike or get help finding lodging and directions to attractions. One of the boats, the ‘Bernard Palissy II’ offers river cruises or ‘promenades fluviales’ for up to 200 guests. Some of these promenades include lunch or dinner, and for special occasions, like La Fête National (Bastille Day in the US), which promises fireworks, midnight cruises with champagne and music are also scheduled. The other boat, the low-slung ‘Villes de Saintes’ offers promenades fluviales as well. It’s an old cognac barge, a typical, flat-bottomed river transporter from a time long since gone, when many goods, like cognac barrels, salt or limestone from the Crazannes quarries (also mentioned here), were shipped downriver to the Atlantic ocean, where the transatlantic merchant ships awaited their loads. In addition to these two cruise options, we also have small electric boats available for rent. They’re called ‘Les Santons’ (not to be mixed up with the provençal Santons) and all the little boats have cute Roman names, like Augustus, Julia Marinus, Tibere, Carantonus, etc. They allow up to five people to enjoy the river close up.

As we were sipping our wine, the ‘Ville de Saintes’ returned from an afternoon promenade and disgorged its passengers onto the quay. The group quickly shuffles past our triumphal arch, currently under refurbishment (Svp, note the encircling fence & keep your distance. We regret the inconvenience, but it has to be done every thousand years or so) and disappeared in their snazzy, white tour bus…

A few minutes later a fashionable pair on a jet ski drew our attention toward the barge again, as they doubled back for a second look.

We noticed several people lugging heavy media equipment, some of them boarding the ‘Ville de Saintes’. The center of focus among the group on board seemed to be a young woman dressed in skinny jeans and a wide swing coat in dusty rose linen, or so it appeared from afar. 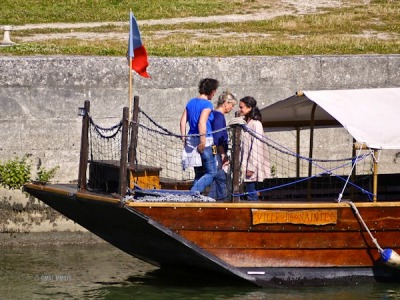 The barge proceeded to repeatedly tack up and down the river between our two main bridges, the Pont Bernard Palissy, and the Pont de Saintonge. When we lived in Chicago, we watched film crews a number of times, and these repetitive ‘takes’, we saw here on the river, seemed quite typical. 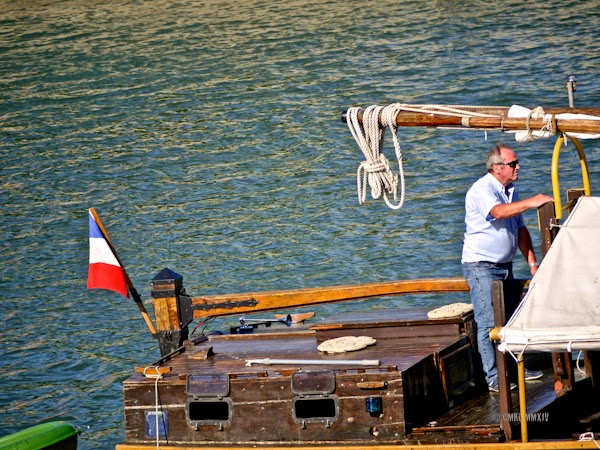 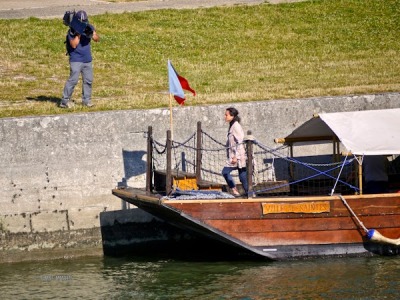 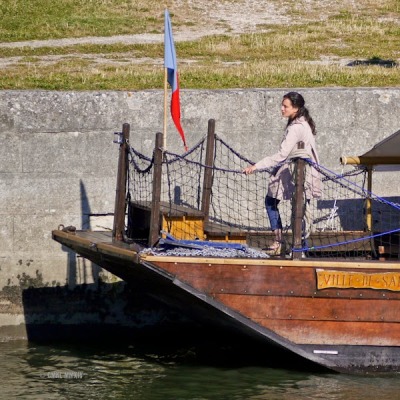 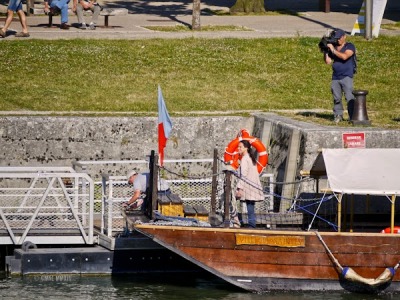 Eventually, the barge returned to its moorings, while the camera crew on the river bank rushed over to record The Lady’s graceful disembarkation. 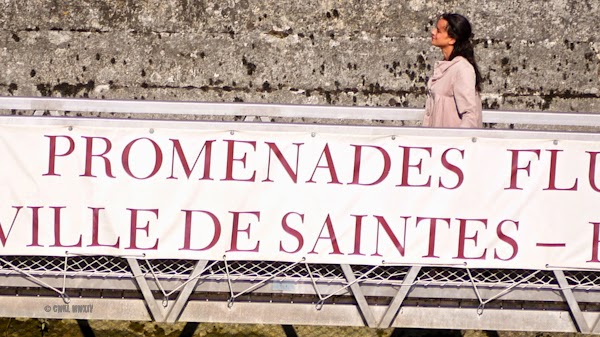 Then, one by one or in pairs, all of them disappeared in direction of our beautiful city gardens. 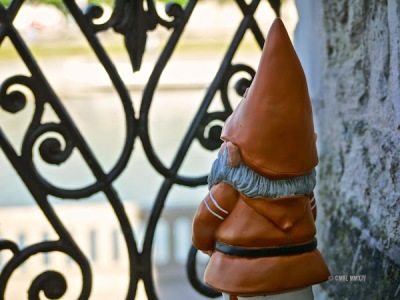 As narrated by Tex, the Balcony Gnome, who observed it all, wondering about the mysterious lady’s identity.

3 thoughts on “The Lady on the Cognac Barge”