Today* is the morning after. The rather foggy morning after the opening weekend of ‘Décembre en Fête 2014’ the local Christmas Market plus entertainment. For the moment, everything is still at the festive venue across the river. While I gaze at the fuzzy scene, movement diverts my attention. A group of cormorants has come in for breakfast.

But this story is about Père Noël, not early birds. For several weeks now the opposite bank of the Charente river, la rive droite, has been a beehive of activity. The municipality began setting up Place Bassompierre for our local Christmas Market, on Thursday, November 27. Thanksgiving Day in the US, just a regular workday here in France.

Workers in their bright orange safety jackets first laid down tarps, before the city-owned huts for the vendors were forklifted into position. These booths then framed a permanent, central water feature called “L’Arc et O”, which was installed a few years ago during the general prettification of the plaza, a former parking lot.

I fancy, the n

ame for this contemporary installation, meaning the Arch and O, is a clever wordplay, as it combines the neighboring Roman antiquity, our dearly beloved Arch of Germanicus, with both the symbol for oxygen and the French word for water, ‘eau’, pronounced ‘o’. The basin is 37.2 m or 122 ft long and 7 m or 23 ft wide. There are 64 jets integrated into a low, slightly wavy surface, which are programmed to perform a variety of soothing water ballets. The contemplative nature of the water feature, designed to evoke the spirit of ‘Las Ramblas’, the Catalan cultural synonym for an esplanade, is enhanced by a surround of integrated wooden platforms, on which one may sit or lay and meditate. These benches of sorts alternate with funky planter boxes made of chicken wire and filled with gravel, alright, alright, river pebbles and normally planted with papyrus (cyperus papyrus). As it happens, my favorite plants in our jungle garden in Costa Rica are those crazy clumps of papyrus, so I enjoy seeing it around here also. In preparation for the December festival, of course, the planters were cleaned to receive appropriate seasonal, northern European vegetation.

By early December, while the landscape crews of the city of Saintes were putting the finishing touches on the Christmas village, les animations, the entertainment moved in as well. All that hustle and bustle prompted me to quickly walked across the little footbridge near our house to investigate the heightened activity levels on the opposite bank.

Stepping off the pedestrian bridge, I turned left, thus walking past the old abattoir on my right, which now houses an immense number of artifacts administered by the archeological museum & society. Looking across the river, I can see our home as part of a nearly continuous row of residences and businesses along Quai de la République.

Approaching the carnival rides on the near flank of the Arch of Germanicus, I am now able to identify a still folded giant slide vehicle and a, well, I don’t really know the proper name for this carousel type ride, where two-seater baskets spin at high speed around a central column. The French call them pousse-pousse (rickshaw), but by any name I hate the things, because I nearly lost my baby brother spinning helplessly on such a carnival ride. He was about kindergarten age and the centrifugal forces generated by the high-speed rotation pulled him inch by inch underneath the safety bar. God, was I desperately holding on to his little form! That was an utterly horrible experience and I never rode another one of those death contraptions. Okay, I’m done shuddering now, let’s move on.

A few steps further we find a newly landscaped bed outside the archeological museum and the office of tourism. If you have visited France going back almost 50 years, as I have, you’ll be well familiar with the institution of the ‘Syndicat d’Initiatives’. Every single village beyond the designation of hameau (hamlet) used to have a syndicat d’initiatives, a centralized office for information regarding town or region. These offices were staffed by locals, often volunteers or town clerks, who explained local offerings to passing strangers. Before the advent of the Internet, these guys would find you hotel beds, rental apartments, make dinner reservations, outline routes to attractions on multi-colored maps, or have brochures and discount coupons available for the intrepid traveller. Ultimately this system developed into the ‘Office de Tourisme’, professional organizations promoting tourism at large, and they’re still doing a splendid job!

Walking on past these future attractions, I soon reached the object of my curiosity, which had prompted this investigatory excursion.

No, not the old arch looming, but the white boards that had been laid down beneath it by two industrious workers, laboring all through the morning, as I watched from across the river. You can see, how my windows are a perfect vantage point for observation:

The HDPE boards before me, which still needed to be clipped together tongue-in-groove fashion, were not a dance floor, as I had envisioned, but an ice-skating rink. I am apparently quite weltfremd and had no idea such things existed while any Canadian with hockey-playing children has a garage or barn outfitted with these (High-Density PolyEthylene) boards, to afford their kids wholesome entertainment and additional practice time. Here in France the ice rinks are very popular, I learned, and part of the Carnaval Circuit, traveling far and wide through the rural landscape. Mystery solved!

we come to “L’Arc et O”, now seasonally decorated as well. Obviously our weather forecast is favorable since the water is still running. In Chicago, no fountain was ever left alive passed Halloween! 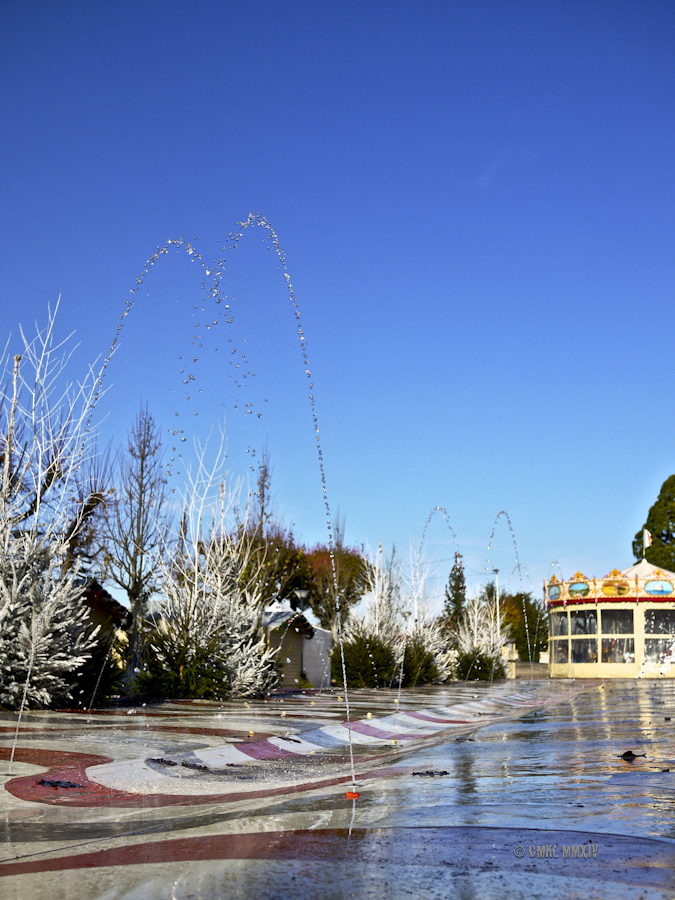 I really can’t praise our landscaping crews highly enough. They work tirelessly throughout the year to keep all the flower beds, green spaces and the city parks in top shape, all without the use of chemicals. Grassy areas sprout dandelions and violets among which worms, bugs, snails, and mice live happily, until they become fodder for birds, cats and each other, naturally. For the Christmas market, crews brought in dirt, landscaping it with groupings of living trees and bundles of painted sticks. They used pine chips to cover the dirt to retain moisture and each little hill-scape was then decorated with logs and moss. Nearly white beach sand took on the role of snow, providing a lively contrast to the dark bark.

The pine chips come from the Landes department to our South. Landes, part of the ancient Gascogne region of Three Musketeer fame, is a largely flat area near the Atlantic ocean sporting the world’s largest, entirely man-made, maritime pine (Pinus pinaster) forest, La Forêt des Landes. This industrial use mega-plantation began on June 19, 1857, when a law enacted that the Bordeaux moors should be reforested to combat erosion. Until then, this swampland was only populated by a few shepherds and smallholders, who were in the habit of crossing the soggy land on stilts, as this painting by a pre-forest painter shows.

We waited for the rather late, December 13, opening of our Christmas market with eager anticipation. The mayor was scheduled to escort Père Noël to the opening ceremony at 17:30 h and we planned to coordinate a festive repast on our veranda to follow the proceedings from there. In the proper Spirit of the Season, I prepared an Alsatian Flammenkuchen, since that formerly German region has a strong history of Lebkuchen and hot mulled wine. Finally, the long awaited day had arrived: 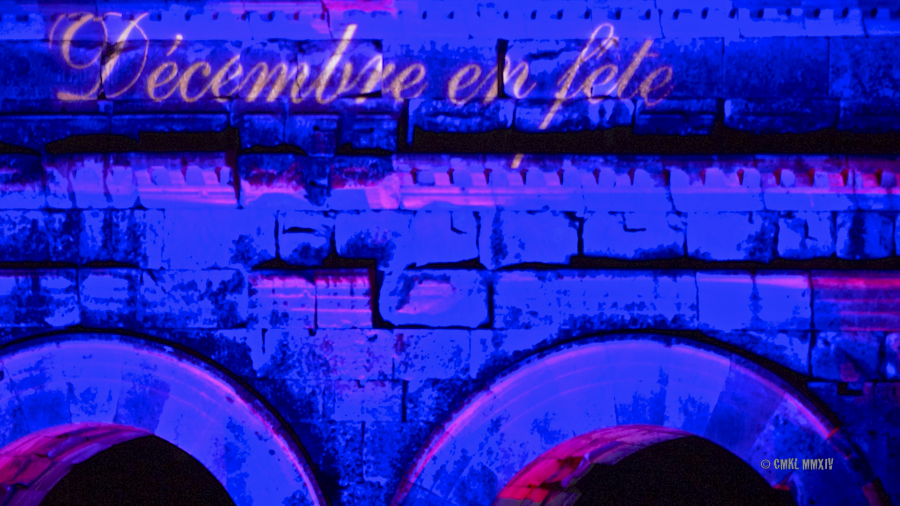 Earlier in the afternoon an ever increasing crowd assembled in Place Bassompierre. 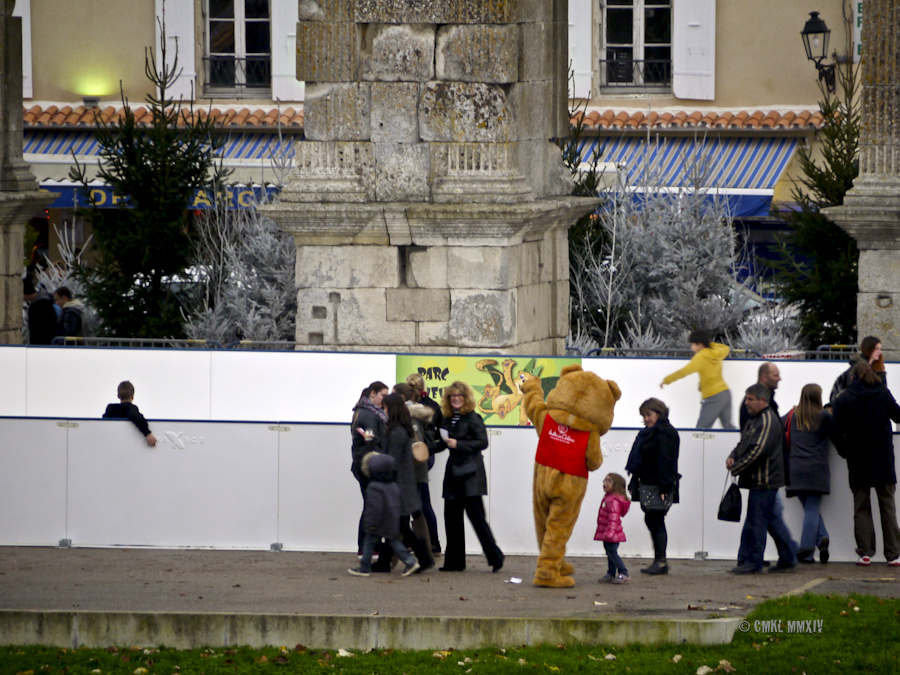 On a slightly less moist evening, we walked across the pedestrian bridge to enjoy the Christmas Market up close. Not even halfway across, we were already engulfed by the joyous (or possibly horrified) shrieks of the pousse-pousse riders. Yes, it was carnival time on rive droite! 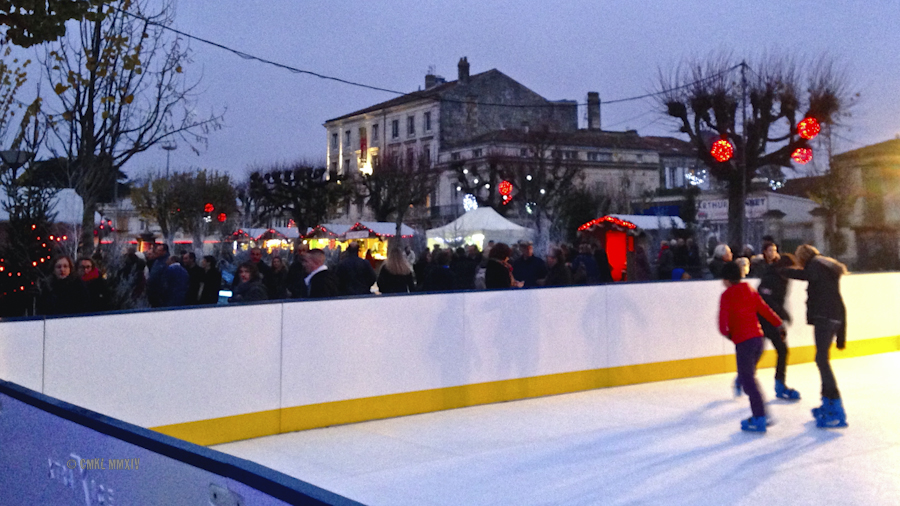 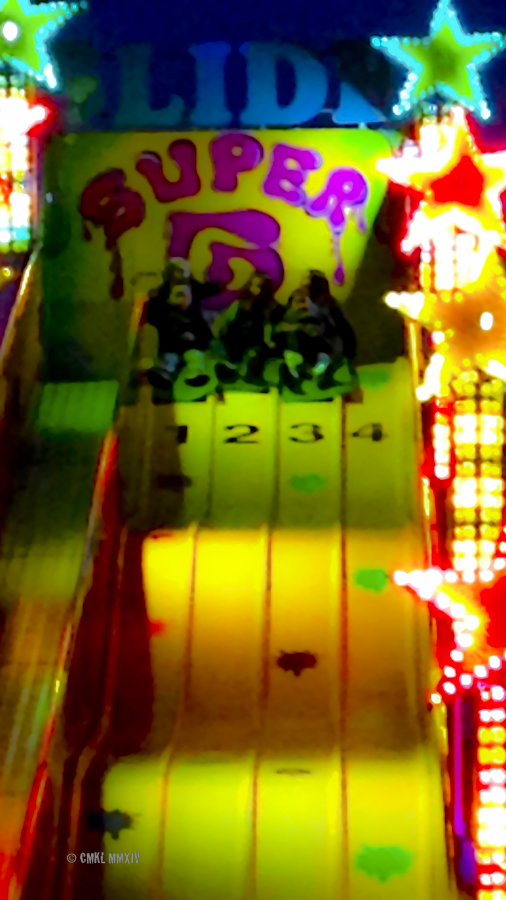 We abandoned poor Santa Claus as well, crossing back to rive gauche and the beautifully illuminated pedestrian zone behind our house to buy some bread for dinner.

* Owing to my own technical carelessness, combined with an automated text saving feature of this site, which is neither automatic nor does it save anything, the ‘morning after’ turned into a ‘week after’, for which I beg your forgiveness. As my clever husband just said, the question ‘have you been saved?’ has taken on a whole new meaning! And, as long as I have your undivided attention I’d like to mention Bertrand to you. Bertrand runs a fabulous food booth at the Christmas Market.

He serves raclette sandwiches, possibly the best sandwich you’ve had in a long time! Raclette is a savory cheese from the Savoy region of France and Switzerland. Traditionally a layer of melted cheese is scraped off the remaining wheel and served over potatoes and smoked meats. Bertrand serves his artisanal sandwiches by scraping the melted cheese over ham from the Auvergne, caramelized onions and crème fraîche. Absolutely delicious! I wish you had a chance to taste this enticing flavor amalgam.