As I’m under the weather with a massive cold, I thought I might slap together another winter excursion post while more strenuous activities seem to be, well too strenuous. I’ll just add some pictures and links, then you can shoulder the tough labor of reading through those websites, d’ accord?

Mid-February we set out to visit the Château de la Roche Courbon located less than 20 Km NW of Saintes. We made a detour through Corme-Royal first though, in order to have lunch at Les Acacias. But that’s a story for another post about restaurants we highly recommend. We were driving happily through the countryside, looking forward to our visit and soon entered the château car park, which was suspiciously devoid of tourist cars.

The toilet facilities were closed, I noticed walking by, as were the concessions. In the Gift shop cum office, we were told by a woman hastily appearing from some private apartment that the castle was closed Thursday afternoons. We were a bit puzzled about this unexpected announcement, as we had both, independent of each other even, studied the château website precisely because many attractions have very irregular winter hours – or none for that matter. There had been no mention of any afternoon closures. When I remarked on that fact, her French genes kick into overdrive and she insisted that the Thursday closure was indeed listed on their website. Someone told me once that the French school system took a page from 18th century military academies. They teach, no, indoctrinated their pupils to never ever admit to being mistaken or not knowing, as it shows weakness in the face of the enemy or customer, as it were. Therefore, some graduates of French schools rather tiptoe through hellfire than admit an error, as the example of Jeanne d’Arc so clearly demonstrates.

On our way back to Saintes, we decided to hang a left and drive to Taillebourg instead. No rhyme or reason, we simply had seen road signs for the village and remembered the name from our Spring excursion to Port d’Envaux last year, which was equally unplanned. Off to Taillebourg we went, arriving there rather promptly since it’s located on the Charente river only a few klicks downriver from Saintes. 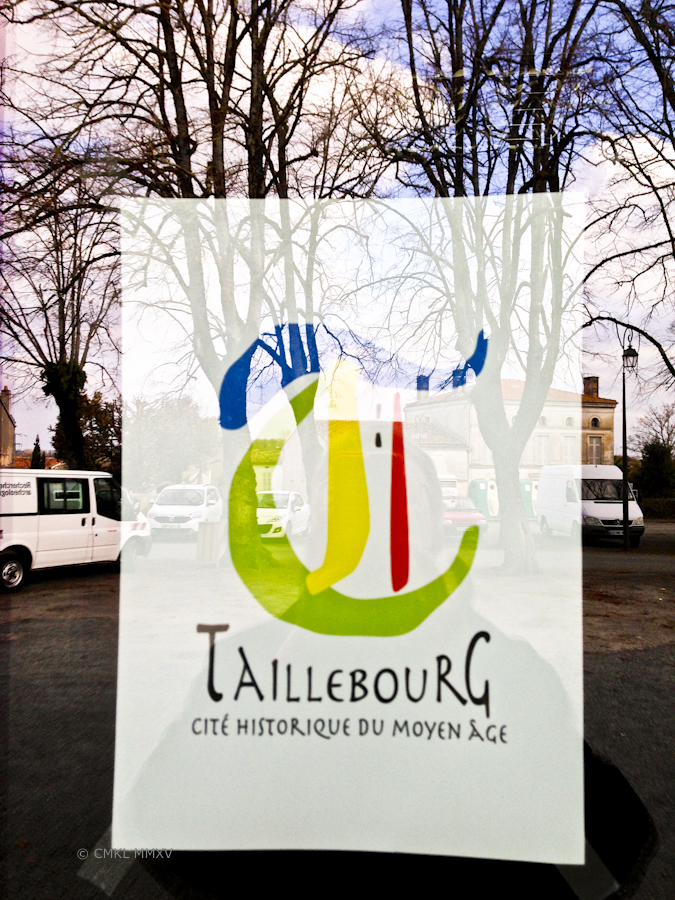 Historic Taillebourg sits on a cliff terrace rising high above the right bank of the river. While most of the village itself has always stretched low along the Charente, a fortress on this terrace has guarded both citizens and, more importantly river access for many centuries. Even before the first known fortress, indices of Paleolithic settlements were found, followed eventually by Celts, Romans, Vandals, and finally in the 6th century King Clovis himself, founding father of the Frankish Kingdom, lurked in the area maintaining a garrison nearby in Saintes. A couple of centuries after Clovis, Saracens climbed over the Pyrenees mountains and stormed through our region, pillaging and burning, until Charles ‘the Hammer’ Martel put a stop to their shenanigans in the battle of Poitiers in 732. Whereupon Charles Martel’s grandson, destined to become Charles the Great or Charlemagne, Holy Roman Emperor, ordered the construction of the first fortress in Taillebourg in 770. This first fortification and its subsequent replacements were destroyed and rebuild or upgraded with some regularity.

From 770 to the French Revolution the castle of Taillebourg represented an important political and economical chess piece, not just locally, but at an international level as well, including but not limited to the 100 year war. Delacroix created a famous painting of one such international incident involving the saintly French King Louis IX pitted against Henry III of England, who in 1242 launched this disastrous military action on Aquitaine soil. Saint Louis won, even though neither he nor the Brit were actually on the battlefield after the first round of saber rattling at Taillebourg nor was there much of a battle, really. First there was a one day skirmish to defend the Charente bridge leading up to Taillebourg castle, which the French defenders won quite handily. The defeated enemy then hastened upriver to besiege Saintes instead. The next day or so, the French army caught up with the besiegers and tormented them for a little while until the British faction ask for peace. The famous painting of this “Battle of Taillebourg” dramatizes the event very prettily in the romantic style of the mid-19th century.

The political importance of Taillebourg lies in its location. The Saintonge, our region, has always been part of the heartland of Aquitaine, which means it was an independent duchy, a kingdom at times, and didn’t belong to the French Crown, represented by the French king and his uppity vassals up North. The marriage of Eleanor, Duchess of Aquitaine, or Aliénor, as she’s called around here, to a British ruler didn’t help matters in the least. During centuries of conflict in the South, fueled by political and religious motivation, the river Charente became a natural border, the Aquitaine Mason-Dixon Line one might say. Just a juicy little tidbit for you, regarding our Aliénor. In her first marriage, she was actually the wife of the French king, Louis VII. Allegedly they honeymooned at Château de Taillebourg.

Economically speaking, a castle guarding river traffic has always been a must-have for the upward mobile gentry. Even in Gallo-Roman times, the Charente was an important transportation link in the provinces between the Trans-Alpine center of the Roman Empire, Lugdunum or Lyon via Saintes to the Atlantic coast. The barges on the Charente carried many taxable loads, above all, salt, which made the Lords in Taillebourg quite happy. Wood, as well as the famous limestone from the quarries in Crazanne, practically next door to Taillebourg, was also shipped downriver, and cognac barrels, of course, never forget the eaux-de-vie! But when railroads became the most reliable mode of transportation, the ever busy former commercial shipping route turned into a quiet oasis for recreational boating and bird watching.

Even before the once important waterway was diminished to a tourist destination, the once mighty fortress up on its cliff had fallen on hard times. Right at the beginning of the French Revolution a new edict came into effect, which aimed to confiscate the estates of members of the nobility, who had fled the country. As it happened, the lord of Taillebourg, Duke Jean de la Trémoïlle Britain was at a spa in Aix-en-Provence, then part of the Kingdom of Sardinia, when the revolution broke out. The poor gentleman had suffered a paralyzing stroke and was taking the waters for his rehabilitation. Letters explaining his health situation fell on deaf ears and castle Taillebourg was mercilessly auctioned off to a local notary. Afterward Château de Taillebourg suffered the same fate as countless other brave defensive structures throughout history, it was pulled down, dismantled and the stones repurposed. A fire in 1822 completed the ruination.

What then were we visiting? A lively village of about 750 inhabitants, some rather grand buildings of the Napoleonic area lining what once was the driveway, a pretty public park overlooking the river and a slightly disheveled manor house, once home to war orphans of WWI, now a kindergarten and first grade school for surrounding communities. Not much at first glance, but it oozes history nevertheless.

This pretty building housing the major’s office, post office and a small but select grocery store. Next door in the community center, a mother and baby group was busy having fun organized by récré-O-bus, an ambulatory day-care facility. This is such a brilliant idea, bringing fun and educational day care and child development ‘classes’ to small villages. The group also offers help & instructions to prospective parent & grandparent, and much more. 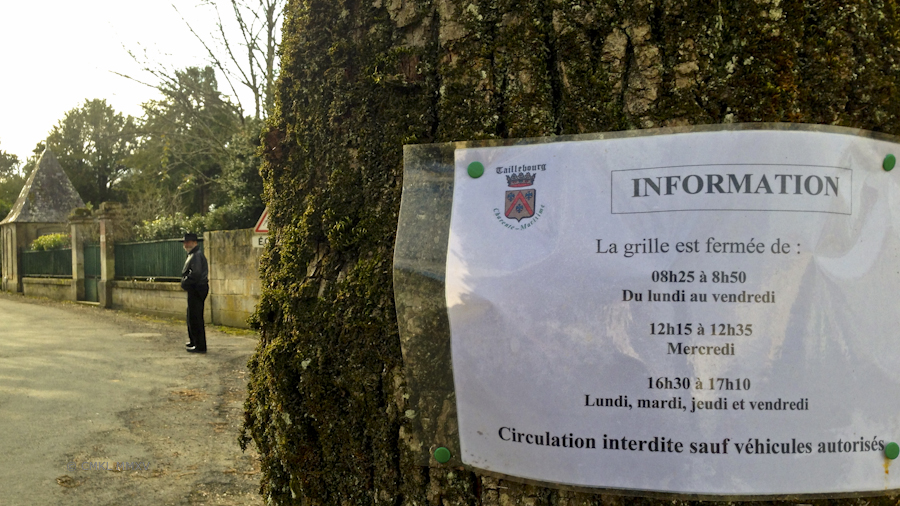 Walking from the central plaza, where we parked, toward the formerly fortified cliff, I bumped into this notice thump tacked to a mossy old tree. Until I read the closing times listed, I thought it announced a restaurant closing. That’s when the detective-work-for-clueless-foreigners kicks in. Whatever ‘La grille’ is, only authorized vehicles may drive through it. A grille can be a bbq, it can be the grid in a crossword puzzle or the questionnaire a patient has to fill out at the hospital admitting office. Context, woman, context! It’s an official notice with the town seal. La grille is only open for 25 minutes early in the morning and late afternoon, plus one brief lunch date and you can’t bring your personal car inside … the  town maintenance yard, which, presumably one closes with a metal gate: la grille. Oof!

The French culture strongly supports education, stressing, in particular, something called le patrimoine, their cultural and national heritage or patrimony. Patrimoine and terroir are true catchwords, representing unabashed pride in everyone’s national and local history and inheritance. To that end, you will find helpful posters with extensive instructional material everywhere, which some of us actually study, others not so much.

From here one walks between stately mirror-image buildings, lining the former driveway toward the castle grounds. Soon the remnant of the castle tower comes into view, broken but proud.

The park includes the cliff terrace from where Saint Louis watched Henry III and his cohorts approach across the vast prairie in the morning of July 21, 1242, before swinging himself in the saddle to chase the Brits off.

After watching a group of school children competing in a foot race, we strolled back to the car for the short drive home. 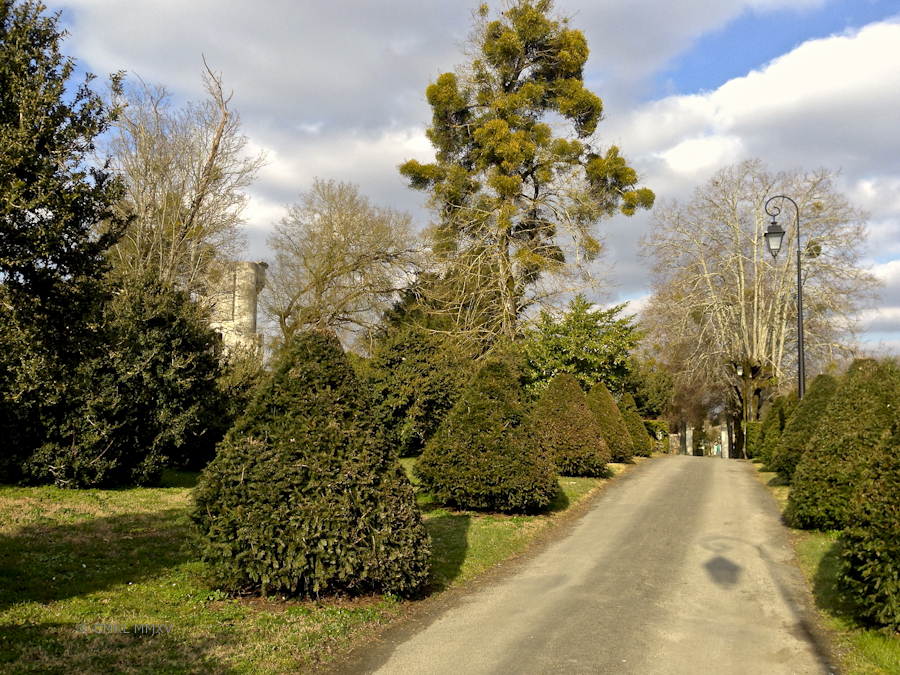 In order to show you the extent to which many, many French villages cherish and nurture their patrimony, I’ll add a link to the official town website and a theater group, les Baladins du Compte de Taillebourg, which dedicates its performances to local history. Both are remarkable, especially this town website if you consider that there are only 735 people in all of Taillebourg!