Our exchange home location was so well placed that we could walk almost anywhere we wanted to go for either sightseeing, grocery shopping, or eating out. When a place was too far or we weren’t in the mood to slosh through the rain, we took the Metro or a bus. Public transportation in Barcelona is inexpensive and easy to use. We were out and about every day, so I accumulated quite a large number of snapshots as we were exploring. Below I’ve put a few of them together as a scrapbook of our first visit to this fabulous city.

Visiting the Picasso Museum: no pictures allowed, but we bought a Picasso-bib for our granddaughter Izzy in the museum shop. They’re easy to mail in a padded envelope. We bought another bib and a matching sippy cup for her at the Mirò museum, but we’ll keep those for her first visit with us in France.

The Fundació Juan Mirò equally eschewed shutter action, except in the garden area, which was closed to the public, naturally. We only had access to a kind of utility terrace with a few colorful Mirò tidbits. 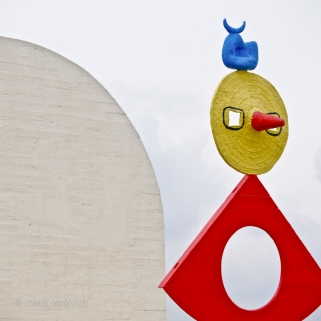 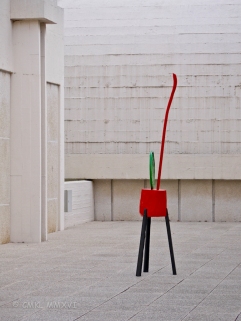 However, there was a lovely park just below the museum which invited us for a splendid walk among the cedars. The entire Montjuïc area of Barcelona, the Hill of the Jews, has a number of smaller parks and the Botanical Gardens and the former hilltop Citadel, which once defended the city against potential aggression from the sea, but also witnessed the dark side of politics. Different regimes used the citadel as an execution ground for dissenters. 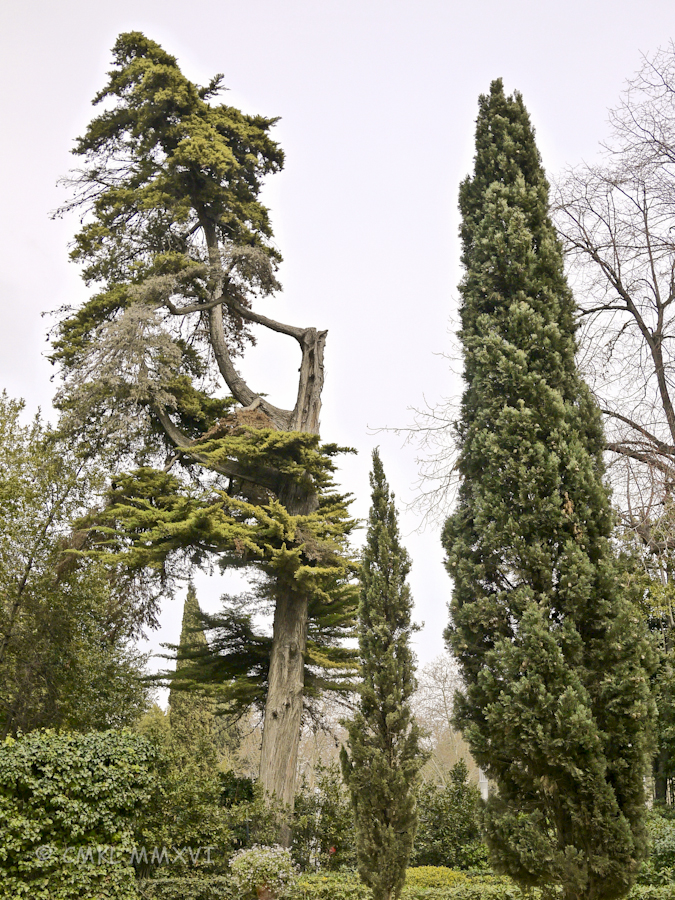 We mostly hiked through the city streets during our visit, though. It was just a little too chilly and rainy for thoughts of picnics among twittering birds. Instead, we tweeted in sheltering bistros.

Cochinillo at the fabulous Viana! 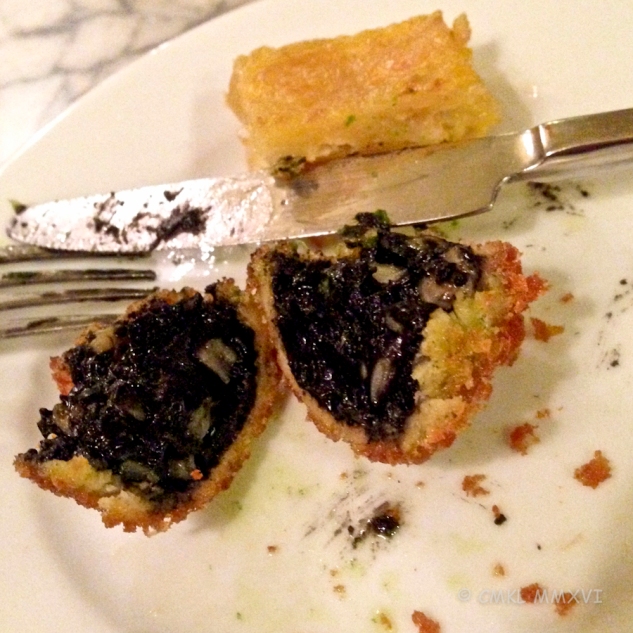 We tried a little food for the soul also, occasionally.

The Contemporary Art Museum of Barcelona 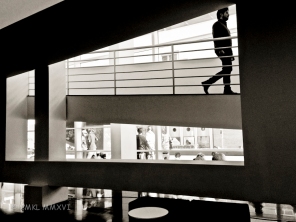 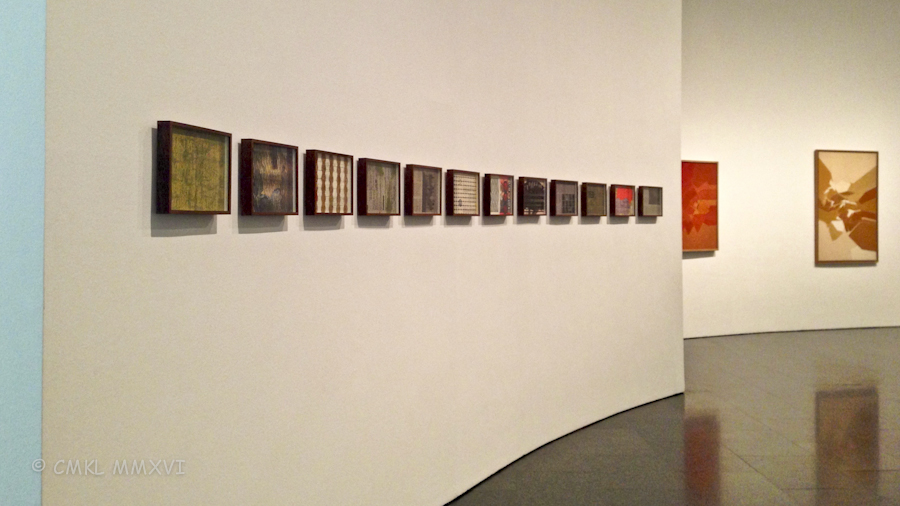 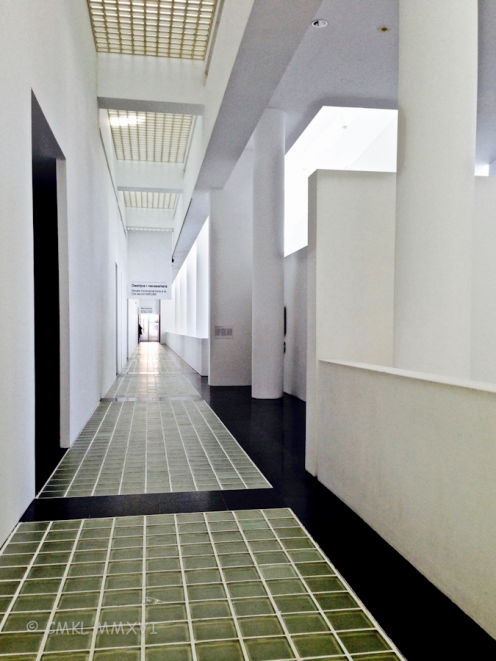 The art not admitted

Aside from the wonderful whiteness of the museum itself, a black and white temporary exhibit was most enjoyable for my soul, largely through its not so black and white presentation. While the majority of this exhibition of photographs was indeed showing enlargements of black and white images, the museum curators also presented a collage of photographs from the book Barcelona, blanc i negre by Xavier Miserachs i Ribalta through color projectors, turning his images into ever-changing kaleidoscopic vignettes, which, to my delight, proved interactive with the viewer. You’ll see it below!

In stark contrast to the clean lines of contemporary Barcelona, its past is anything but uncluttered. Case in point, the Orfeó Català – Palau de la Música.

We stumbled across it quite accidentally. This concert hall, or as it is titled, Musik Palace, a UNESCO world heritage site of global fame, of which we were hitherto blissfully ignorant, is situated in a narrow and unassuming street. 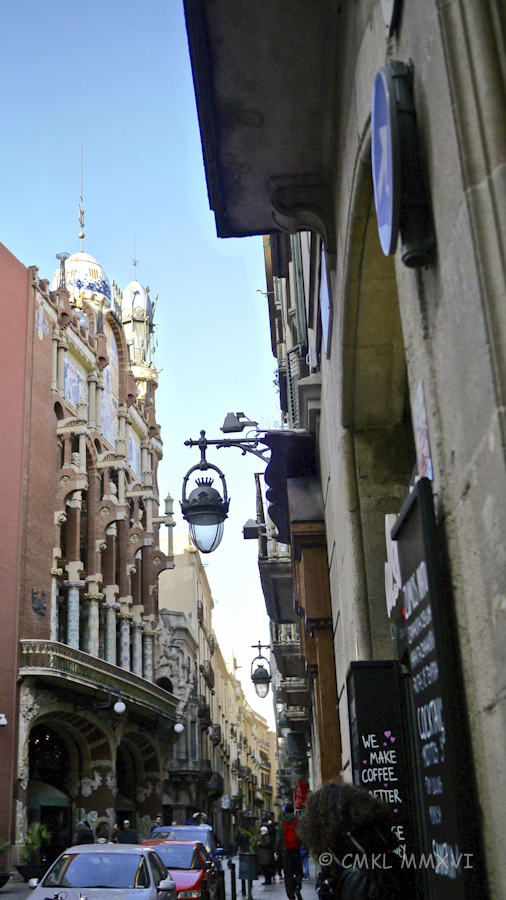 I was very interested in the unusual brick treatment of the adjacent building, possibly a modern extension of the concert hall and music school, before the over-the-top edifice even registered with me.

Once you do get a glimpse of the Catalan Modernisme building by architect Lluis Domenech i Montaner, which was opened as the headquarters of the Catalan Choral Society in 1908, it’s difficult to look away, or believe your eyes! 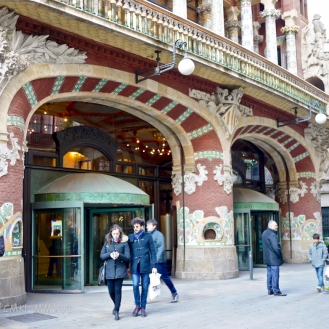 We snuck briefly into the lobby, but they were getting ready for a performance, so we couldn’t look around. There are pictures of the actual concert hall in the Orfeó Català website. And as long as we’re talking Art Nouveau, I did go back to the pastry shop on la Rambla and took a few more pictures of their Modernisme decor. 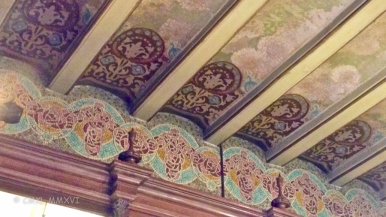 The lovely baked goods are of recent vintage! 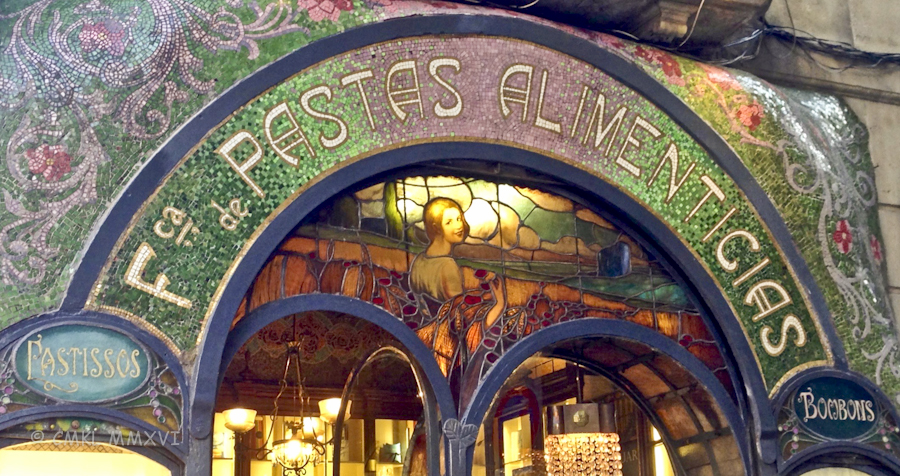 We also passed this pharmacy of the same era as the pastry shop, 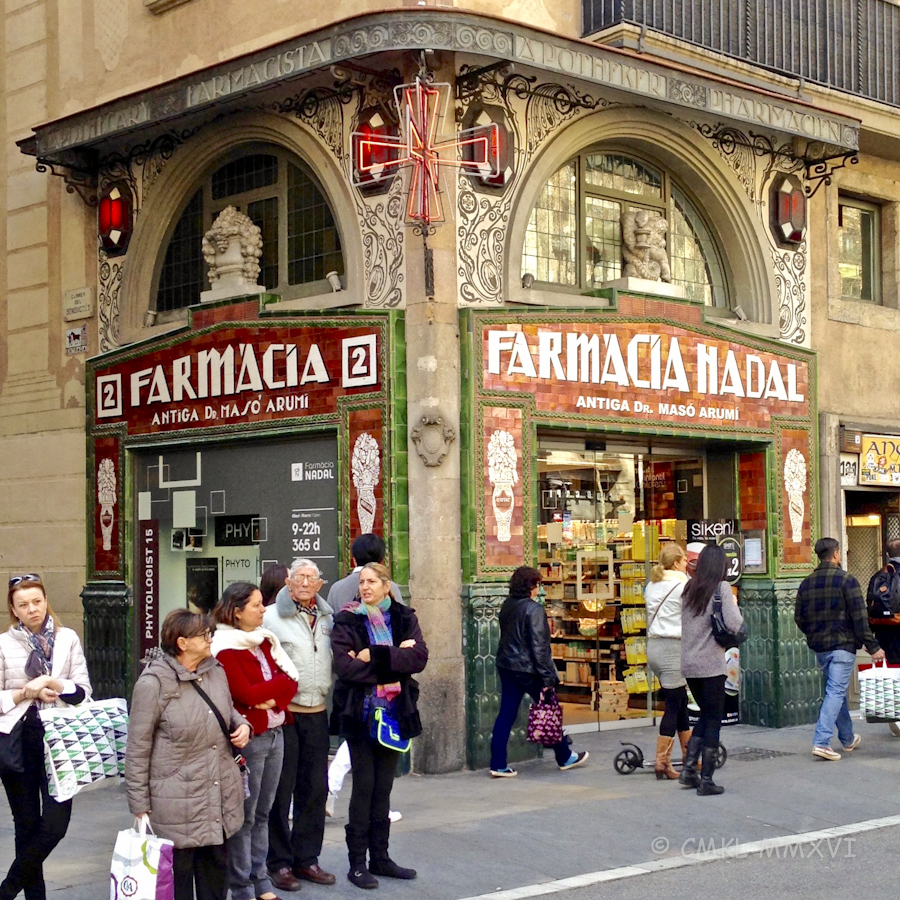 and many more buildings of all different styles, as well as other grand or curious vistas across this fantastic city. 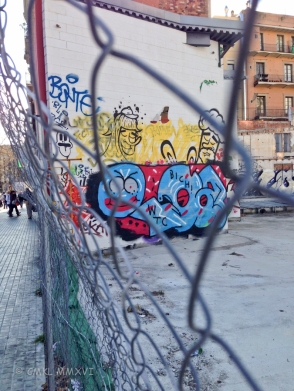 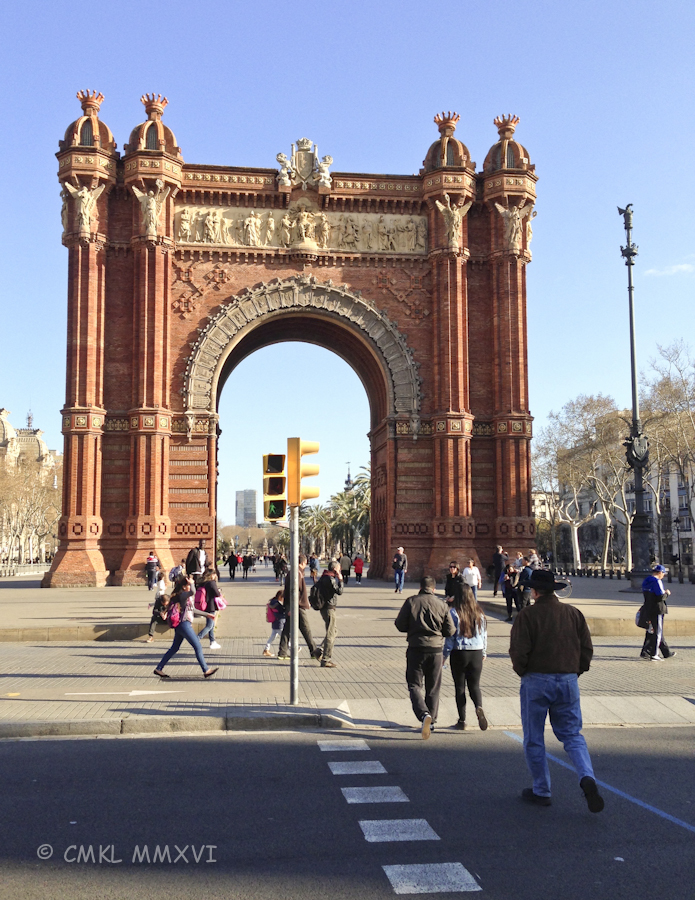 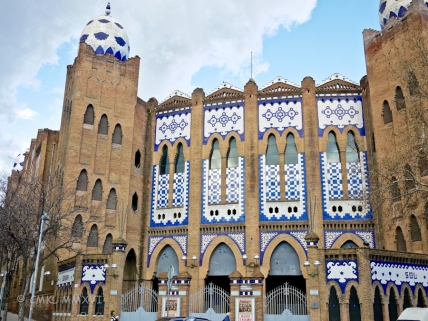 The monumental Bullfighting Ring with SOL [sun] & SOMBRA [shadow] sections. Since the ban on fighting it’s a museum

Architectural Society gift shop, library & workshops. In the lobby a model of Barcelona 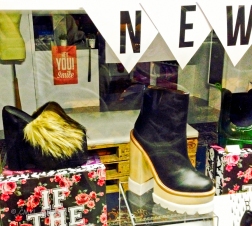 An aborted museum visit turned into a walk through a beautiful park and surrounding area. It turned out that the Natural Sciences Museum near our house moved to a new space, called the Blue Museum. I’m already looking forward to a visit during our next trip! The funky Castle of the Three Dragons location is now under restoration, but still houses some research labs and administrative offices. 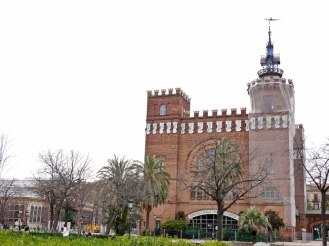 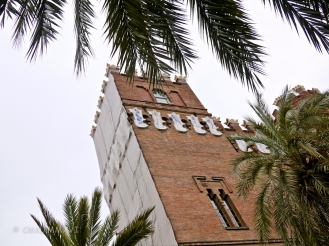 I wish I could’ve taken close-ups of the huge ceramic ‘crests’ all along the upper rim of the fake castle. They are quite unique, showing hand-drawn examples of flora & fauna, but I couldn’t get a good vantage point for pictures. As a consolation prize, Barry discovered three remarkable stained glass windows near the building entrance. Unfortunately, that lobby was locked, making it difficult to capture the images through the reflective glass door, but even half-hidden, they were gorgeous. This is one of three different designs.

The dragon castle occupies one corner of the Parc de la Ciutadella, a large green space that also contains the building of the Parliament of Catalunya, a zoo and assorted other attractions we discovered on our walk. One of the main gates to the park sits directly opposite the Triumphal Arch we encountered earlier.

Neither man nor goose looked comfy.

And few were tempted to glide over the pond. 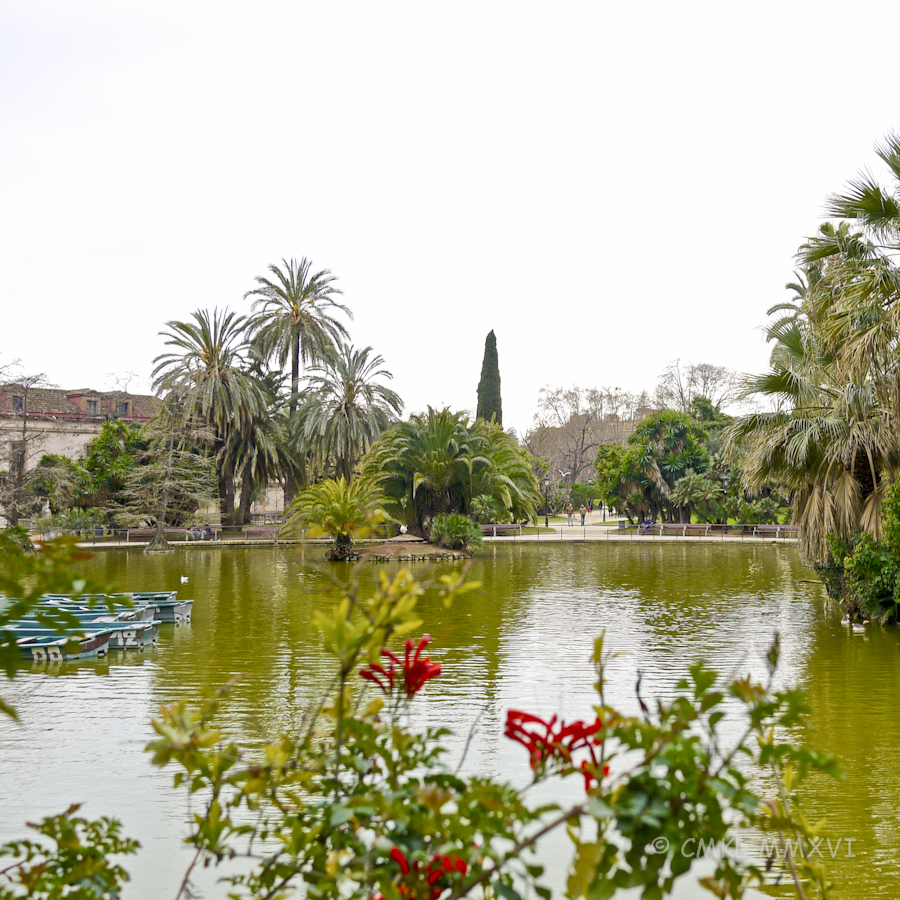 I think the time has come to ride through the Medieval gates and head south toward Granada, Andalucía!