Every now and then one gets a chance to see something extraordinary, something mindboggling. Visiting the Alhambra is definitely one of those occasions.

Do you know what the Alhambra is? It is the crowning glory of Granada’s Al-Andalus period, the vibrant testament to Islamic culture in western Europe before it was absorbed into and supplanted by Roman Catholicism. Seven hundred years of largely tolerant cohabitation of people following three major religious denominations without getting their knickers in a twist. A demi-millennium plus without (much) religious conniptions! Imagine that!!

The Alhambra entry in Wikipedia calls it a ‘palace and fortress complex located in Granada, Andalusia, Spain’. Yes, it is that, in the same sense that Ellis & Liberty islands are an immigration center with a statue. And since the Alhambra is just as popular with tourists, as Ellis Island was with immigrants, do not neglect your trip planning. If you want to visit the palace and fortress complex in Granada, especially the palace segment of this famous UNESCO World Heritage Site, schedule your visit well ahead of time or you may not make it, as we found out the hard way.

In Barcelona, we had pre-booked all our Gaudí related tours because we were aware how well attended these sites are. In Granada, we completely blew it. Somehow it never occurred to us that the high demand for tickets would persist after the Easter holidays, partially because we had no idea that the Nasrid Palaces have the same timed entry restrictions as the basilica of the Sagrada Familia. When we finally tried to book tickets, we found out quickly that not only the week after Easter was fully booked but the entire months of March and most of good ol’ April as well. What a disappointment!

After extensive online searches, we were able to purchase one solitary ticket. It came as part of an unrelated deal in which we had no interest and as such was much more expensive than a regular Alhambra ticket. My lovely husband very generously presented me with this one and only chance to enjoy an Alhambra visit – which I almost blew on visiting day by still neglecting to do my homework, as I shall explain later on.

The Alhambra complex stretches high above Granada across a plateau called Sabika hill. The Darro river running in a deep canyon separates the Alhambra from the residents of the Moorish Albayzín neighborhood to the NW. Alcazaba, the Alhambra fortress, originally built over the ruins of a Roman era fort, forms the most westerly point of the complex. The Alcazaba protected the hills of the Albayzín and the Realejo, the former Jewish quarters, as well as the fertile valley between these two ancient neighborhoods which together grew into modern-day Granada.

Since the approach to the Alhambra is quite steep, most visitors take one of the buses connecting Plaza Isabel La Católica in central Granada with the Alhambra complex’ main gate. This bus #C3 isn’t part of the regular bus fleet of a thoroughly modern city. Indeed, it’s just a mini bus, small enough to negotiate the ancient narrow and twisty lanes of barrio Realejo, as they wind their tortuous path uphill toward Sabika hill. 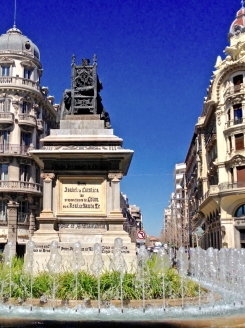 The back of Queen Isabella’s throne as seen from the bus stop. Just a minute or so straight ahead down Gran Via de Colón was our exchange home. 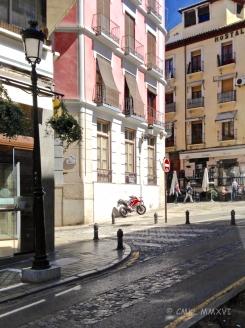 Easing into the streets of Realejo. A fine and fun neighborhood with many bars and restaurants.

If you look closely, you can detect our red and white little van in the traffic mirror. 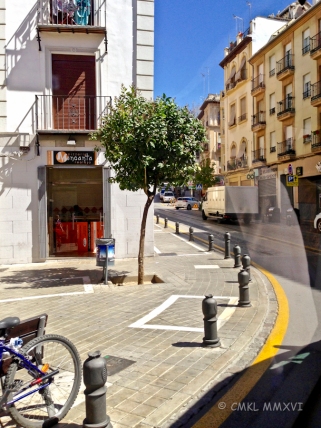 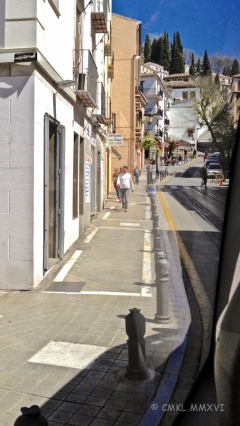 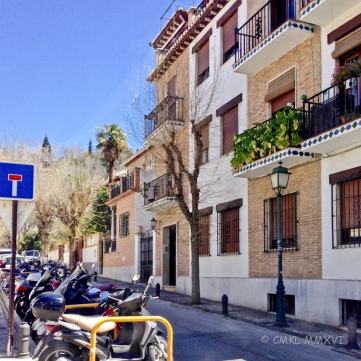 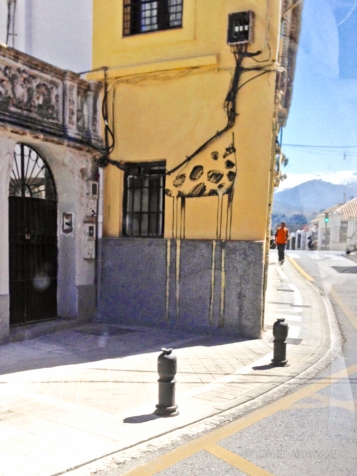 Love the imagination that created this giraffe 🙂 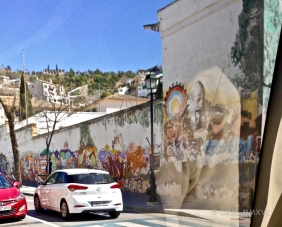 Almost there – Alhambra here I come!

Jumping off the bus [figuratively speaking only, you understand. These days, I don’t much jump, neither up nor down!] I was swallowed by a large moving mass of humanity. Eventually, I got my bearing and joined a long line of visitors with pre-approved entry tickets. After some initial delay, luckily, my line moved swiftly through the electronic scanners. I was in! In the Alhambra! Strolling casually through the gardens atop the Sabika plateau toward the gate allowing access to the Alhambra complex proper, while enjoying the view along the way. 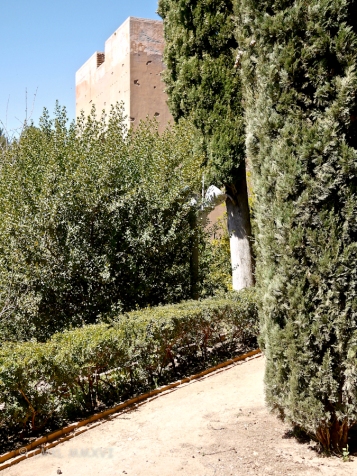 Take note of the map below. This slightly worn sitemap was posted just ahead of the gate and I should have paid much closer attention to it as I passed!! 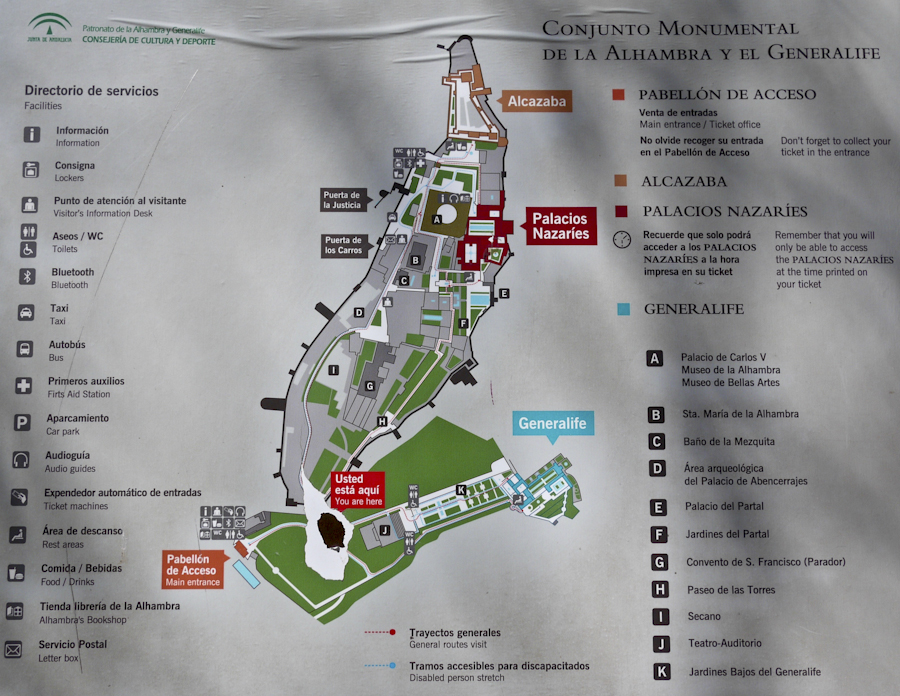 But the sun was in my eyes, I couldn’t really see any detail and forged ahead injudiciously.

Crossing the former moat into the Alhambra proper! 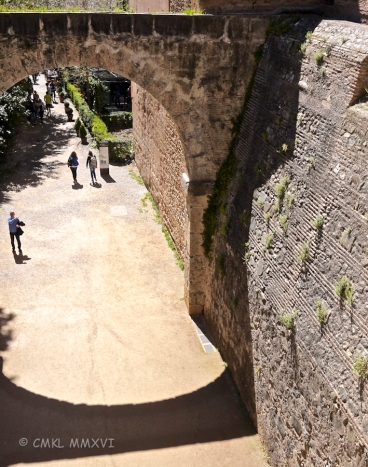 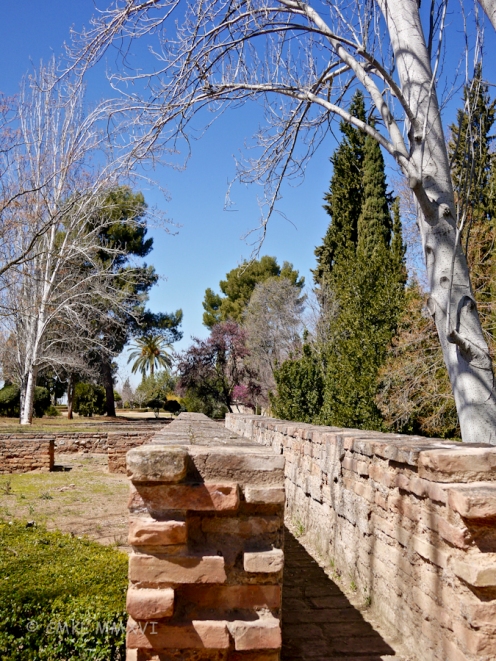 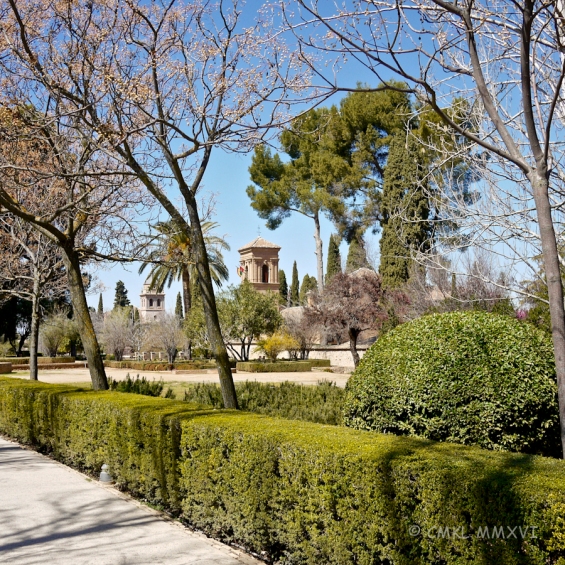 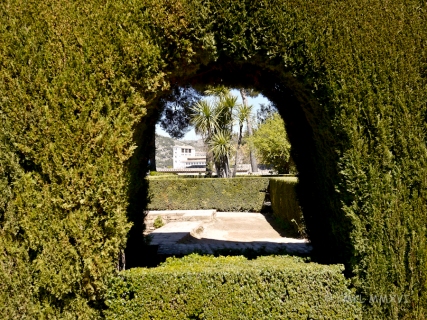 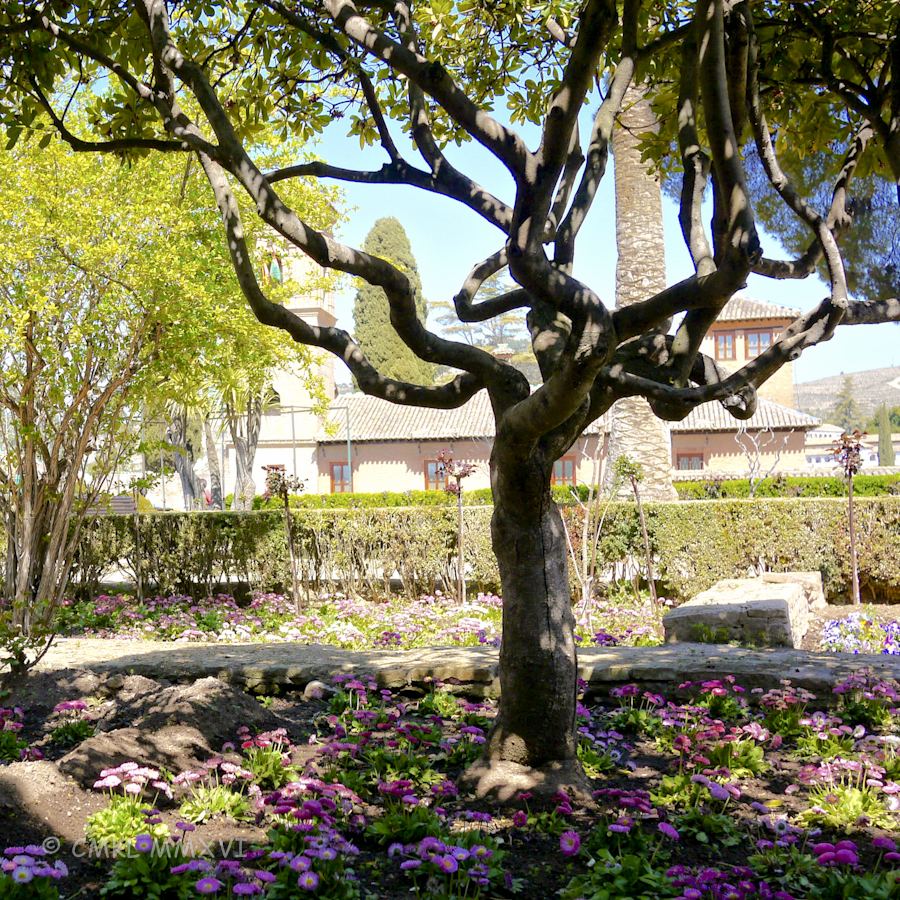 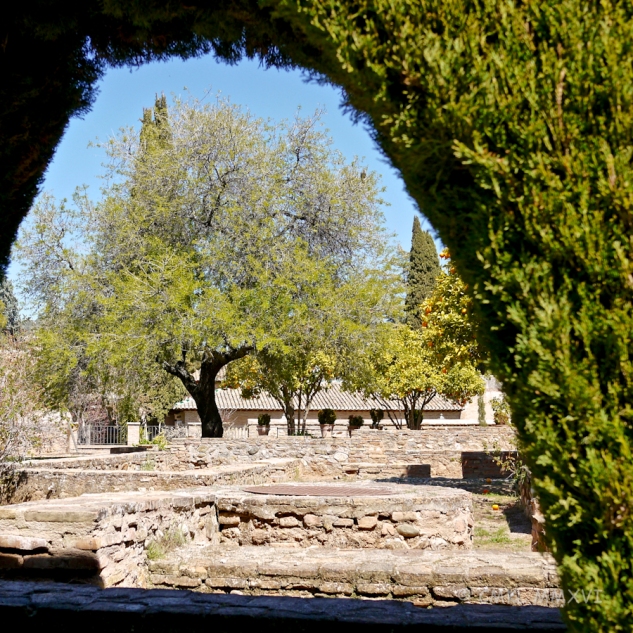 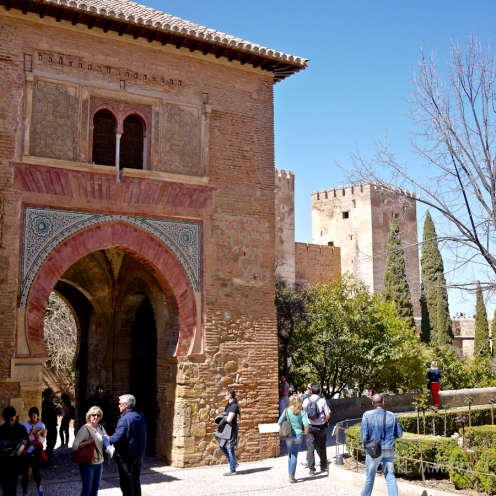 After I passed through the horseshoe gate – mistakenly as it turned out later – I was primed to get my “Alhambra Visit” started. Following the crowds into the courtyard with the beautifully blooming trees under the glare of the intense southern Spain sunshine, overshadowed by the ominous crenelated towers, I bravely entered the Alcazaba.

Through this metal-clad gate do you enter the ancient fortifications protecting Granada.

Enter at your own peril, because from here on in you’re on your own. Impenetrable stone walls surround you and you better watch your step! 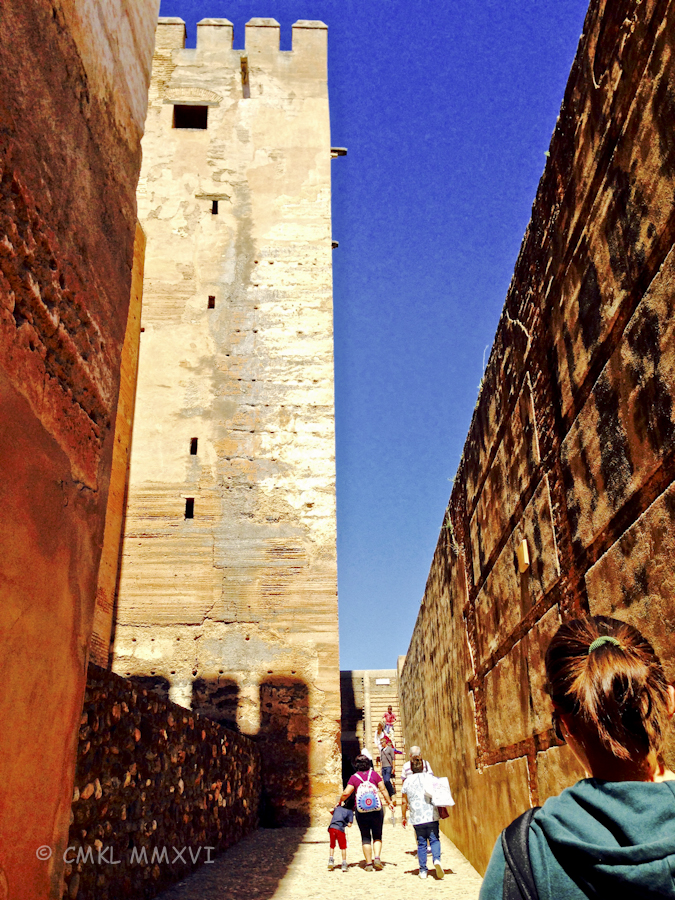 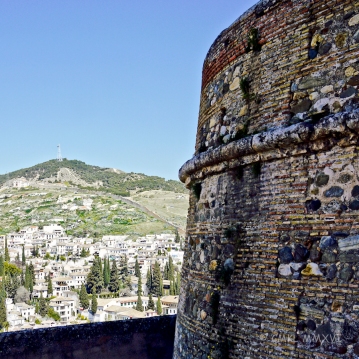 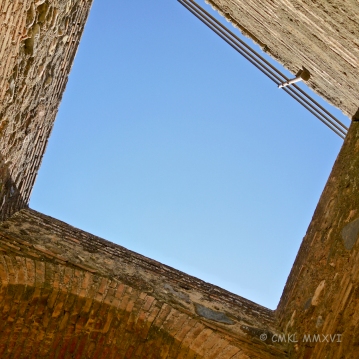 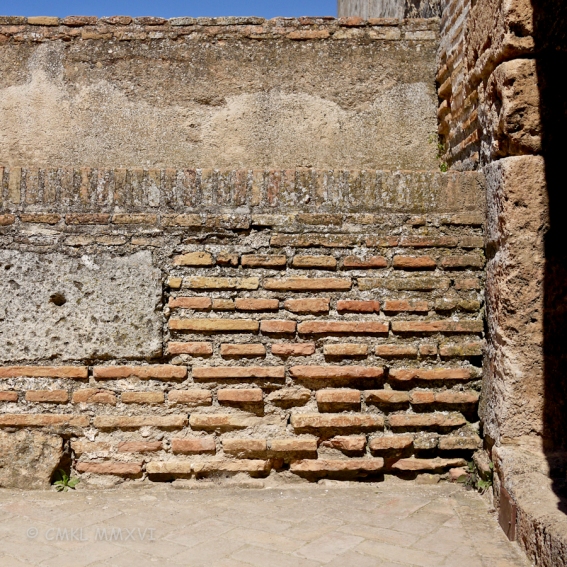 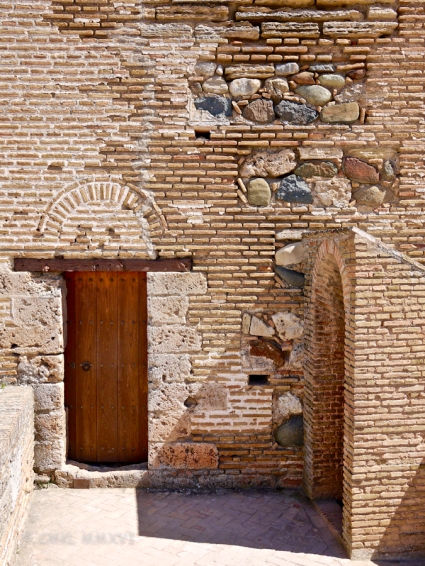 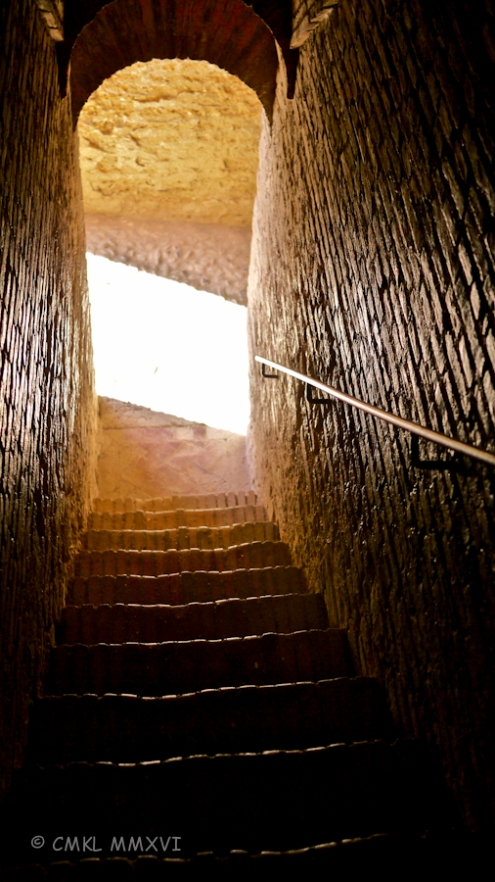 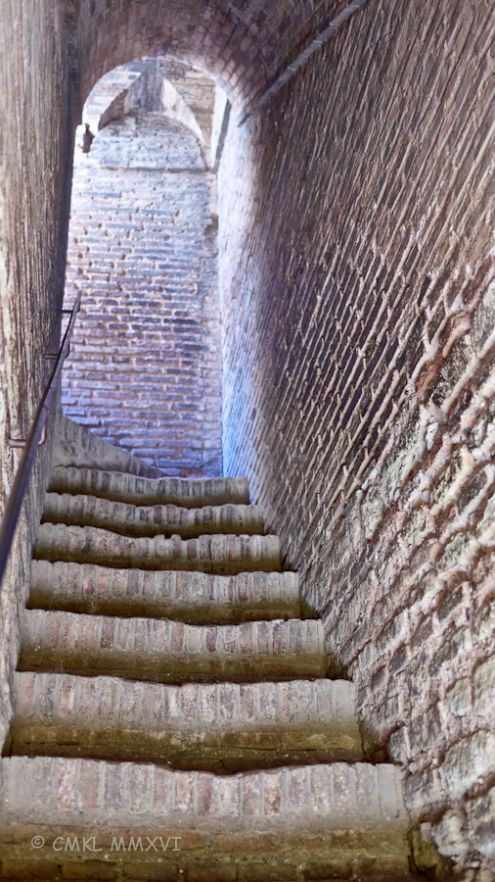 From a platform of the fortress, I had a magnificent view over the ancient and present Moorish neighborhood, then and now, called El Albayzín. My red mark indicates the Mirador de San Nicolás, which is a small but lively plaza to the south of the long-suffering church of St. Nicolas near the top of barrio Albayzín.

It is here that tourists mix and mingle with street musicians and buskers of all ilk, some, like us, having a drink and tapa at a table of one of the many bars and bistros. 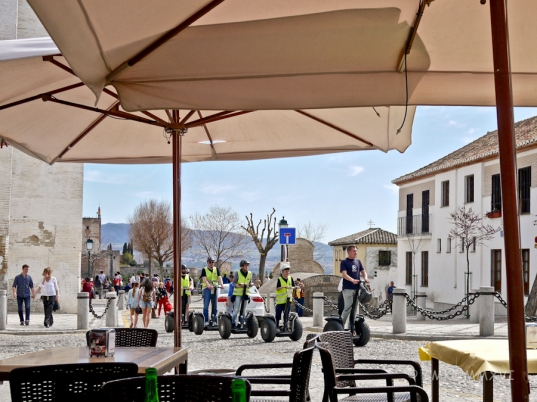 Others simply sing and dance along the edge of the precipice separating Albayzín from the Alhambra across the Darro canyon below – or taking selfies!!! We happened to walk up to the mirador a couple of days after I visited the Alhambra. Thus, I could pinpoint both my locations in Albayzín and at the Alcazaba.

The last challenge of a visit to the Alcazaba is a climb up the many stairs to the top of the Torre de Vella, the main watch tower. 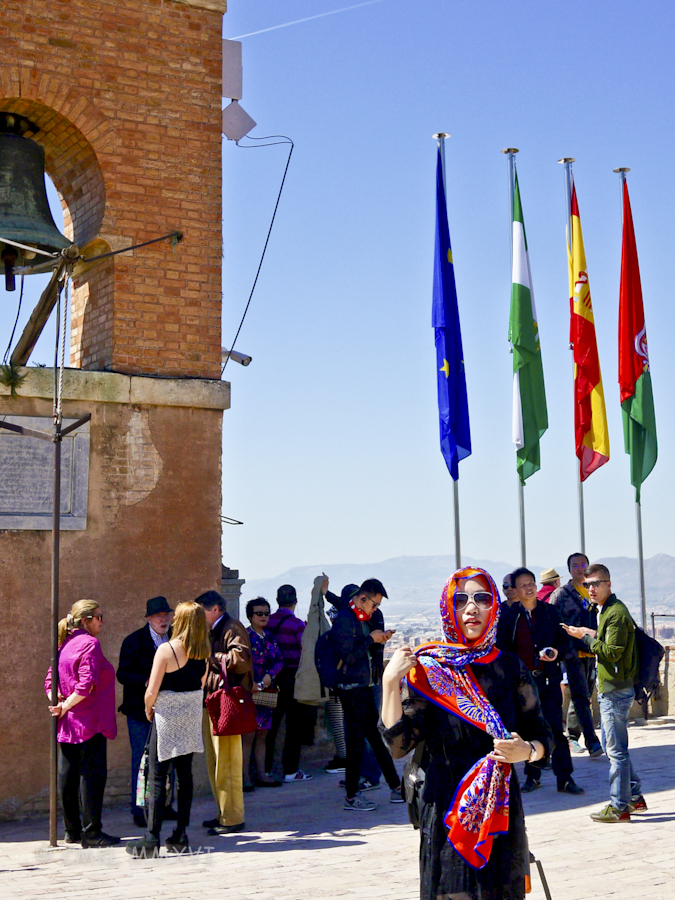 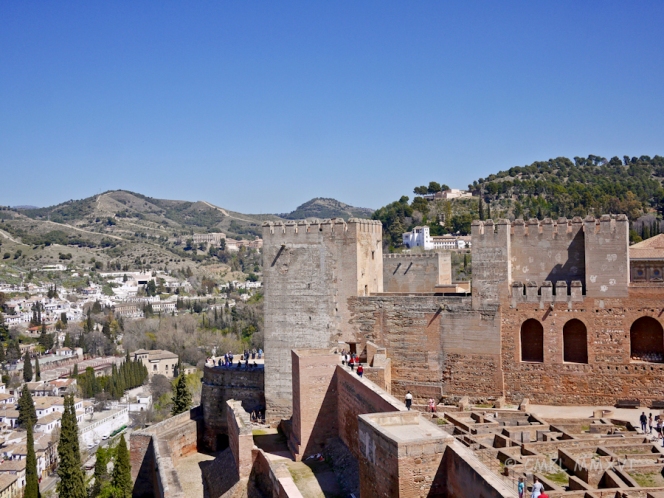 Visiting El Alcazaba was a physical challenge, but a lot of fun. While climbing up and down the countless uneven stairs of the fortress, however, it soon very soon became apparent that among these sturdy and forbidding stone walls no delicate arabesques were hidden. No reflecting pools or intricate carvings, as I had seen in so many pictures of the Alhambra and which my late father called one of the most beautiful sights of his life could be found in or around these edifices. Where did I go wrong in my exploration of the Alhambra?