It took us more than two years, but we finally made it to Bordeaux. And what, you may ask, is so unusual about that? Most people with our North American background never make it to Bordeaux, nor do they ponder that fact. It is a little different for us since we have lived in easy driving distance from Aliénor’s splendid city since the beginning of February of 2014.

Naturally we have driven to Bordeaux a few times. After all, Ikea dwells here. Our closest international airport is Bordeaux-Mérignac and you slide by the city every time you’re heading toward the Mediterranean Sea. We had one cursory tour of Bordeaux’ most obvious tourist spots nearly 10 years ago with a friend from Haux [pronounced “ox”] a community of the l’Entre-Deux-Mers* wine country near Bordeaux. But we’ve never spent any time here, never looked around and taken in the sights, something we shall remedy this week.

* Meaning ‘between two seas’, but really referring to a wedge-shaped chunk of the Gironde department between the rivers Garonne and Dordogne. It’s an important wine growing region east of Bordeaux.

As most of our travel activities these days, this Bordeaux trip is a home exchange. If you’ve never heard of this unique way to travel, here‘s a link to an explanation of home swapping on Wiki. Over the last three years, we enjoyed a dozen home exchanges in Europe and the Americas, in places as diverse as Vancouver, BC, Canada and San Juan del Sur, Riva, Nicaragua and everything imaginable in between. If you have a question about swapping, home swapping that is, leave a comment and I’ll get in touch with you.

If at all possible, we like to meet our exchange families, however briefly, which sometimes is only possible through email. Through the close proximity of our towns, we were fortunate to have the opportunity to break bread with our current exchange partners twice during the last year, thus getting to know them and their neighborhood a little. Presently they are in our home in Costa Rica while we enjoy their home here in overcast and even drizzly Bordeaux. Who’s got the better deal, I ask you? ? ?

After arriving in Bordeaux a day later than planned because it happened to be a race weekend and we couldn’t very well leave home until after we had watched the broadcast of the F1 GP of Catalunya on Sunday afternoon – and weren’t we lucky to see it, the best race of the last two seasons so far! – we increased our efforts to speedily reacquaint ourselves with our host neighborhood of Les Chartrons. Since our last drive down, the city changed the rules on us visitors. When hitherto the entire neighborhood had normal curb parking, they changed most of it to “payant” parking for a steep hourly fee. The few parking spots in walking distance are as precious as emeralds, as I found out when searching desperately for a space in ever widening circle around our temporary home …

As far as sightseeing goes, nothing could be easier in this city. You just take the C tram toward your destination and launch yourself into the Bordeaux experience! 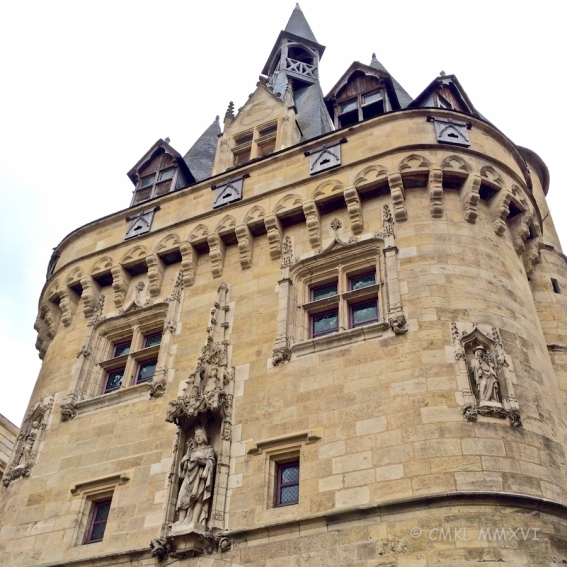 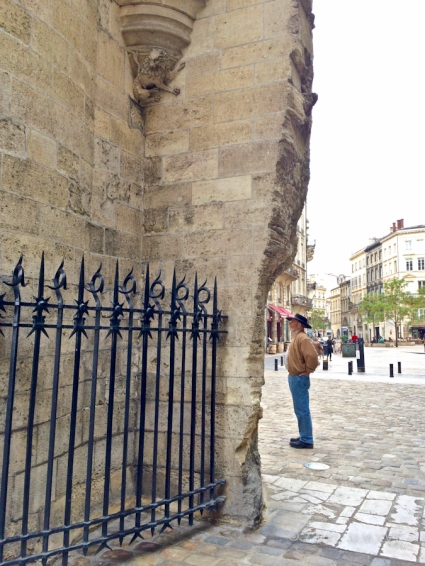 Barry discovered that the old city gate is a museum and one can climb up the steep stone stairs to the former watch tower level overlooking the river and city. Naturally, when the gate was built ~ 1494 to commemorate a victory by King Charles VIII, all the surrounding houses were much lower than today. Thus, it fulfilled its purpose as a watchtower over the busy river harbor with great authority. 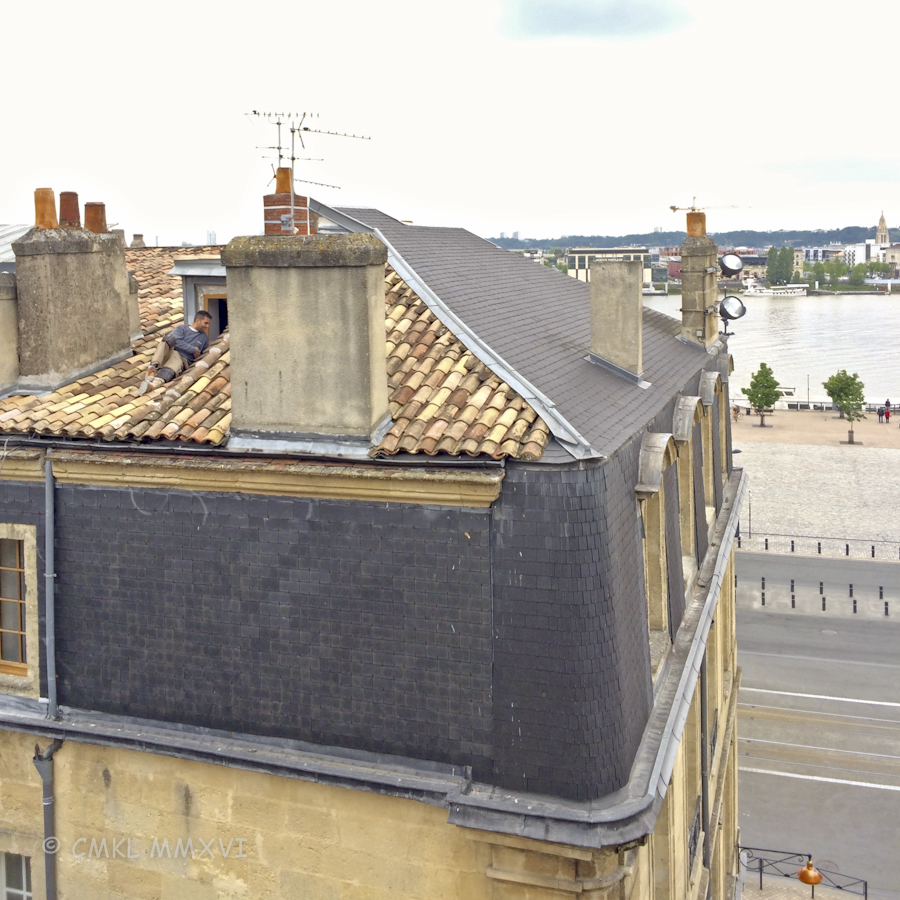 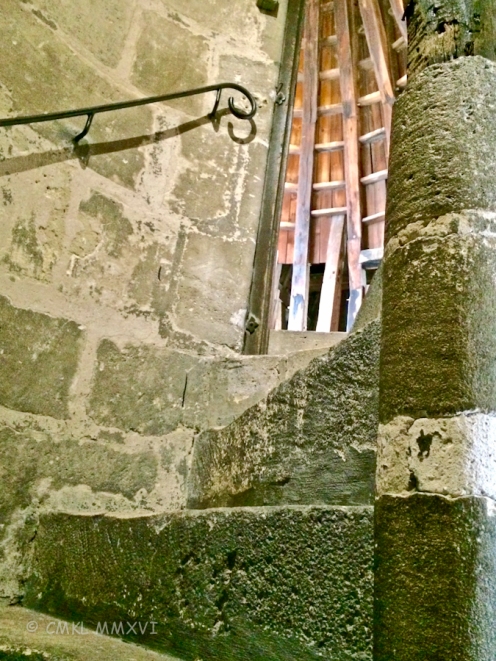 Coming up to one of the conical towers

It wouldn’t be a proper French museum without some ‘animation’, some educational input provided to reinforce a sense of heritage.

The tower’s noble étage, the princely main floor, with windows overlooking both the river and the town

Window hinge, maybe not of Renaissance origin, but beautiful nevertheless 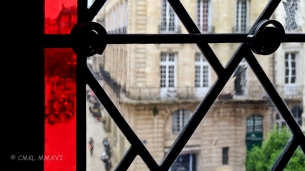 Old window panes: the distortion isn’t a function of me poor focusing skills!

The lowest level gaps between the stonework was closed with acryl panes. One can spy on the tourists below 🙂

Leaving the Porte Cailhau, we meandered through the streets looking here, looking there, being surprised by beautiful vistas and the occasional oddity.

As you walk through the streets of Bordeaux, don’t forget to look up and down the streets and alleys to your right and left. Hidden treasures abound!

But it’s getting late,

and our feet are getting pretty tired. We’re so glad for a tram ride home!

P.S. This morning the bio-farmer’s market spread out along the quay with some delectable local products. 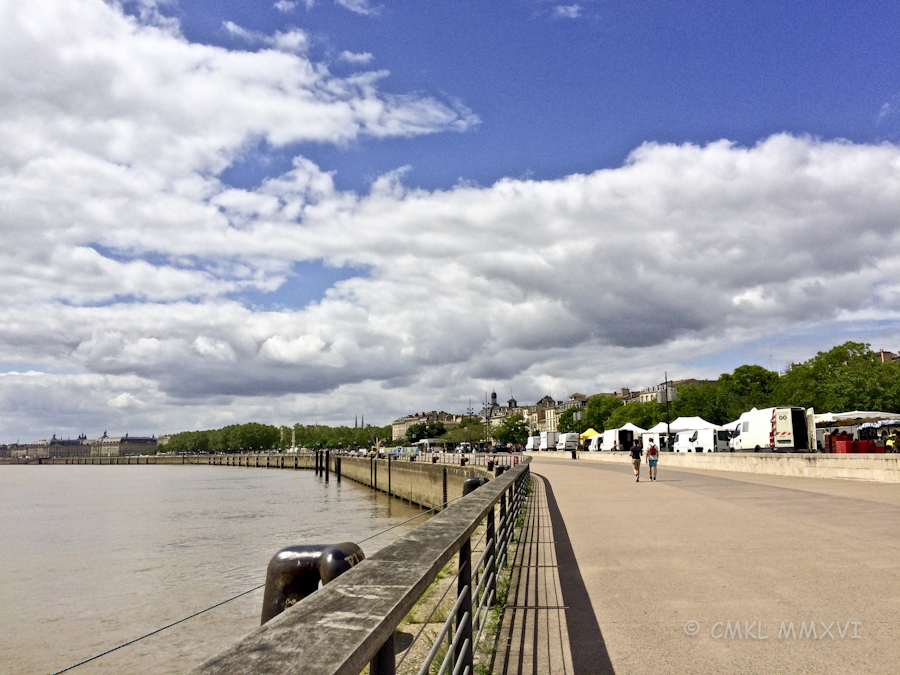 On my way home from the market, I came across a bakery that promised nice artisanal yeast bread with a thick crust, just what I like.

Stepping inside I discovered this enormous cave, a back area with an ancient arched ceiling, blackened by the smoke from wood fires. I asked the sales person if I may take pictures, which she allowed me to do.

When I asked her the age of the bakery, she told me that this wood-fired oven with a Gueulard system was installed in 1765, under the reign of king Louis ‘Le Bien Aimé’ XV. Building a Gueulard bread oven 250 years ago was the height of technical sophistication. It utilized cast iron steam pans, which could be filled from outside after the actual masonry brick oven was closed for baking. The steam thus generated assured the desired heavy crust on the leavened dough. It is, perchance, also of interest to know the literal meaning of gueulard: loudmouth, whiner, bellyacher; but also: chute in a furnace, bullhorn, and blunderbuss pistol. I thought you might like to know. Needless to say, we greatly enjoyed our lunch! 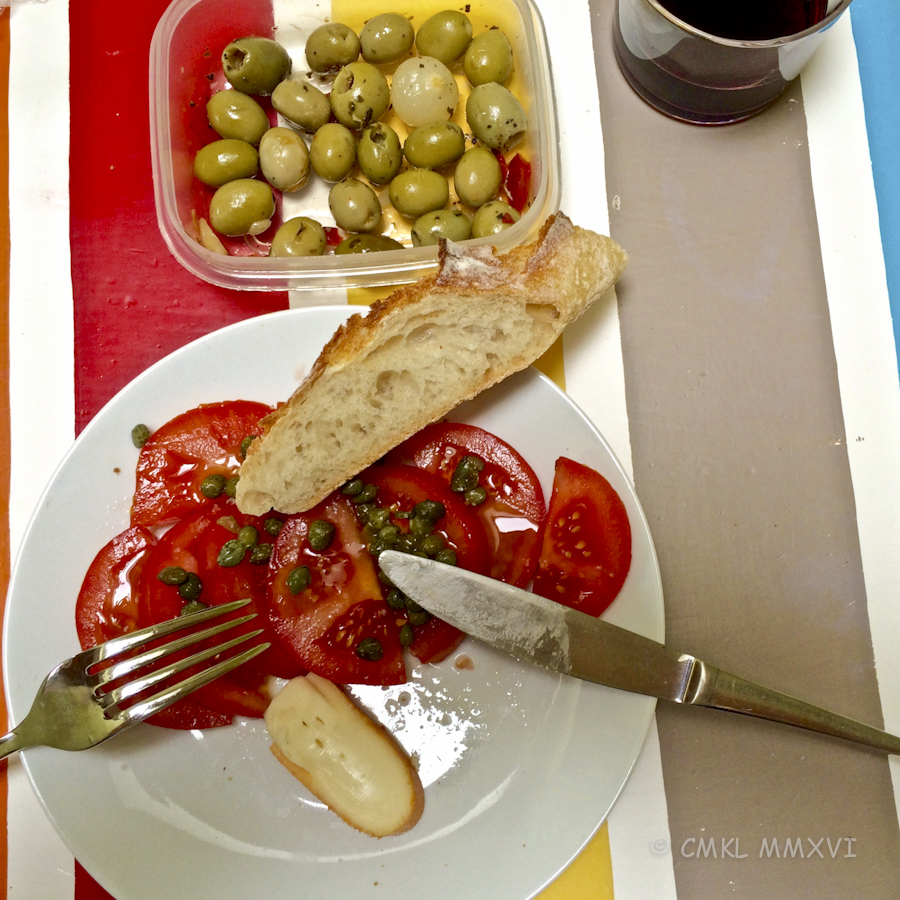