“Cultural attitudes towards rain differ across the world. In temperate climates, people tend to be more stressed when the weather is unstable or cloudy, with its impact greater on men than women. Rain can also bring joy as some consider it to be soothing or enjoy the aesthetic appeal of it. … In Botswana, the Setswana word for rain, pula, is used as the name of the national currency in recognition of the economic importance of rain in this desert country. … Many people find the scent during and immediately after rain pleasant or distinctive. The source of this scent is petrichor*, an oil* produced by plants, then absorbed by rocks and soil, and later released into the air during rainfall.”

*petra = stone + ichor = golden fluid, said to be flowing in the veins of immortals

As I write on my laptop, rain is pounding against the Velux skylights above me. The windows are equipped with moisture sensors and close automatically when it begins to rain. They have been firmly shut since yesterday evening. Today is our sixth day in Munich. One day was absolutely gorgeous with brilliant sunshine and the famous deep blue Bavarian sky. The others were durchwachsen, mixed, but not too bad. Today is shaping up to become a cozy-at-home day. This is the beauty of home exchanges, you borrow someone’s home to enjoy in comfort without the pressure of having to rush through a fixed itinerary no matter what. Besides, when you look at the pictures of the communities devasted by this year’s spring floods you know you better stop complaining about a little moisture!

On our first full day in the capital of the Freistaat Bayern, the Free State of Bavaria, one of the 16 federal states and city-states of the Federal Republic of Germany, our hosts took us on an excursion through some of Munich’s beautiful neighborhoods along the Isar river and into the Bavarian alpine upland, the Voralpenland in upper Bavaria.

There is no more magical natural event of the temperate zones than passing through a mixed forest at the cusp of summer. Evergreens provide deep, nearly black accents among the fully leafed deciduous trees, each species presenting its unique, lush hue of fresh green so rich that even the air sparkles like the facets of a cut emerald. The residual wetness of the frequent showers we experienced throughout the day added tiny prisms enhancing this virescent spectacle all around us while driving from the city to Murnau am Staffelsee. We wanted to visit the Schlossmuseum there, housed in a castle and former fortification going back to the 11/12th century. 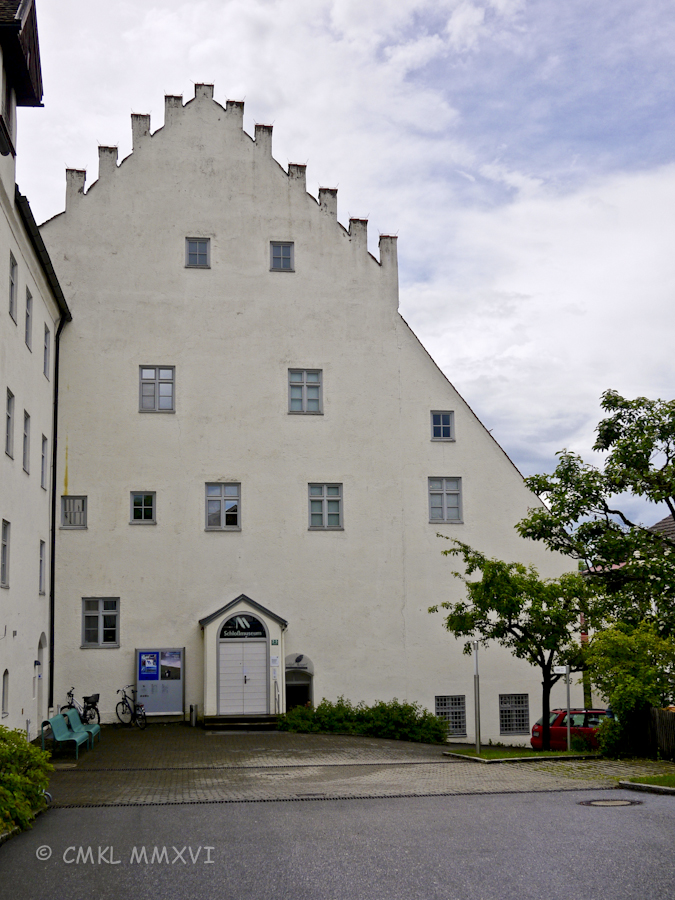 One enters the museum through an unassuming door in the rear which gives access to four floors of exhibit space. Although the museum offers comprehensive material in regard to local geology, biology, and geography, as well as its socio-economical and cultural development over the centuries, including trades and handy crafts, we were most interested in the permanent galleries dedicated to the early expressionism paintings of the Der Blaue Reiter artist group. Only in my dotage have I developed a true appreciation of expressionism. I think I grew up too coddled, too protected from life’s uglier aspects to be able to understand the political statements expressed or the social criticism implied. Nor did I appreciate the harshness of strokes and color palette. Yet, I’ve always loved the work of Franz Marc, Lionel Feininger and, of course, Paul Klee, who’s special exhibit at the Guggenheim Museum in NYC was our first date in the summer of 1977.

Last Saturday in Schloss Murnau we also enjoyed a temporary exhibit titled “Aufs Land!” [to the countryside!]. Beginning in the mid-19th century a national phenomenon developed called the Landhausbewegung [Country home trend]. The well-to-do bourgeoisie discovered the countryside as a refuge from city stress. They built themselves country homes and hung the walls with landscape and genre paintings, like hunting scenes. The exhibit showed such works from the 18th century on, but also included paintings and photography by contemporary artists echoing the Landhaus genre, thus, this interesting exhibit stretched from Wilhelm von Kobell to Annelies Strba. Sadly, the museum didn’t allow cameras, so I can’t offer you my usual tidbits from Photolera’s perspective.

Studying art is hard work and we needed to refuel after we left the museum. We hoped to find tasty refreshments at the Monastery of Benediktbeuern. After all, monks have always been hospitable to pilgrims, right?

A first glimpse of the Benediktbeuern onion doms 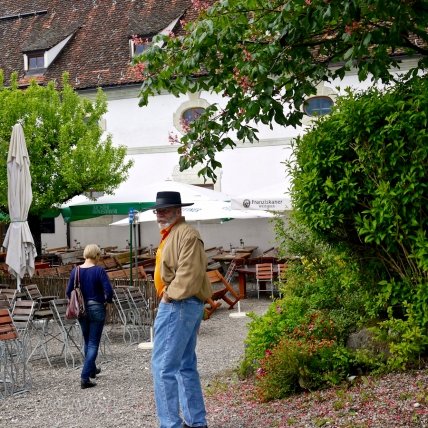 After relaxing with a small (!) snack of Apfelstrudel with vanilla sauce for me, cherry streusel cake with whipped cream for Barry and Uwe (w/o whipped cream), our host, and a bayrischer Wurstsalat (Bavarian style salad of bologna and onion) for our hostess Karin, we left the restaurant through the back door, which opened onto a small (!) courtyard surrounded by the most elegant and lavish agricultural buildings you ever saw. 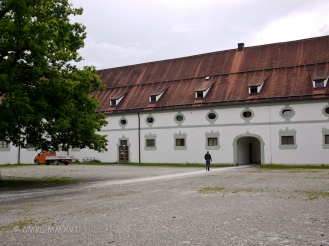 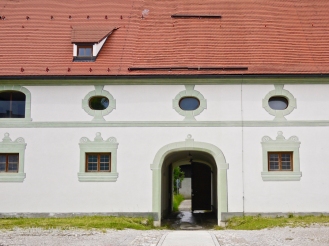 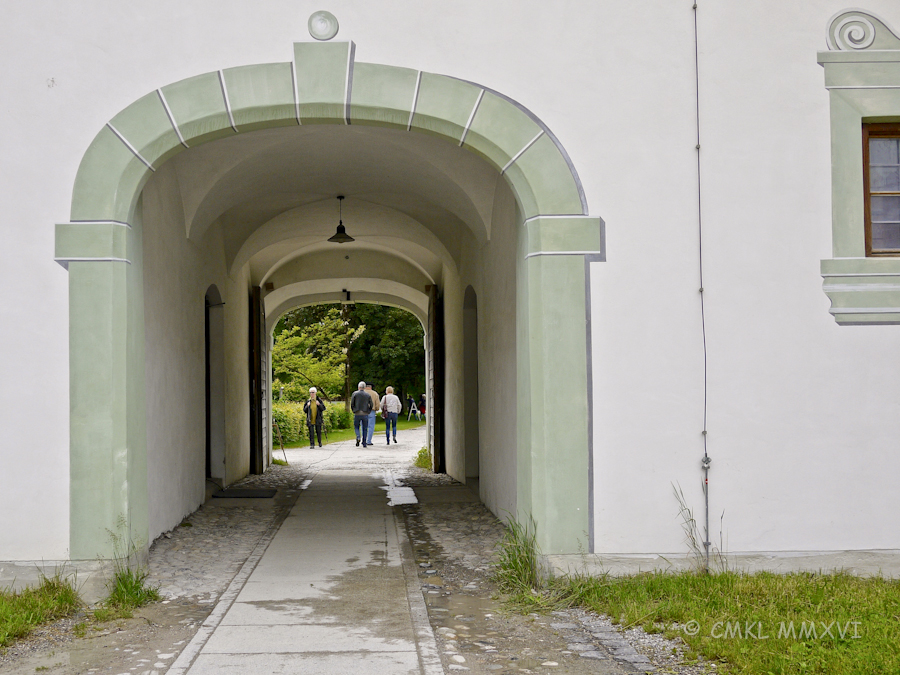 From there we ambled along toward the medicinal gardens,

along the way passing by sad Otto. 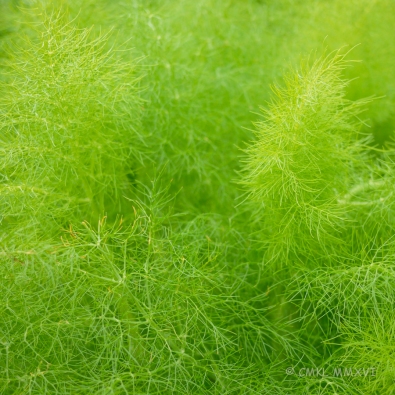 Fenchel [Foeniculum vulgare; var. azoricum, var. dulce, var. vulgare] Fennel – a traditional medicinal plant for thousands of years. Pretty good with fish, too, especially cod. This bush was so mammoth, you just wanted to burrow your face in its aromatic softness.

The fennel bush in the medicinal garden reminded me of my fennel incident in Costa Rica. Behind the casita, we have some clotheslines in a small grassy patch where I used to grow a few herbs in old cinderblocks left over from home construction. Among the greenery was a very healthy fennel of unknown provenance I loved to use for fish recipes and tropical fruit salads. It provided my kitchen well until the neighborhood caterpillars discovered the bounty. The invading Papilionidae larvae threw themselves into one last mega fennel orgy to fatten their segmented bellies for their upcoming strenuous metamorphosis. 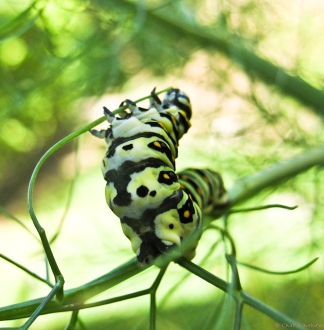 Over the course of a couple of days, dozens of caterpillars ate everything but stem and stalks finished with a couple of hearty burps before settling in for pupation.

Strangely, the resulting swallowtail butterflies are called turnip butterflies in North America, even though it’s parsnips which are in the aromatic Apiaceae family together with fennel, parsley, coriander, culantro and dill, while turnips undeniably do not belong!

Back in the abbey grounds, we went from germination to death, passing through a beautifully kept cemetery,

In Benediktbeuern is one of the highly regarded Salesian Preventive System of Education, named after its founder Saint Giovanni Melchiorre Bosco called Don Bosco 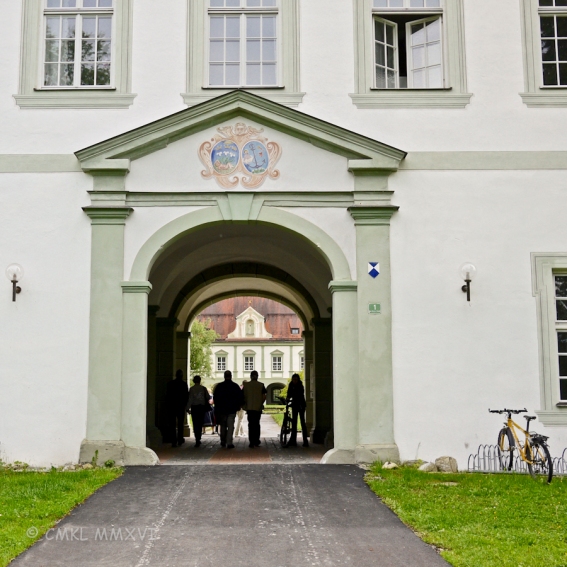 Entry into the monastery quadrangle 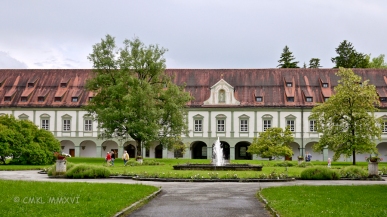 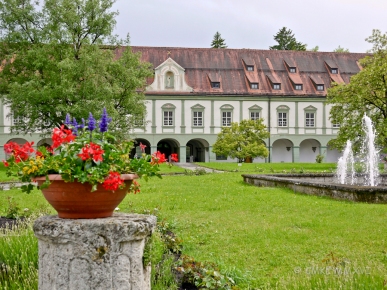 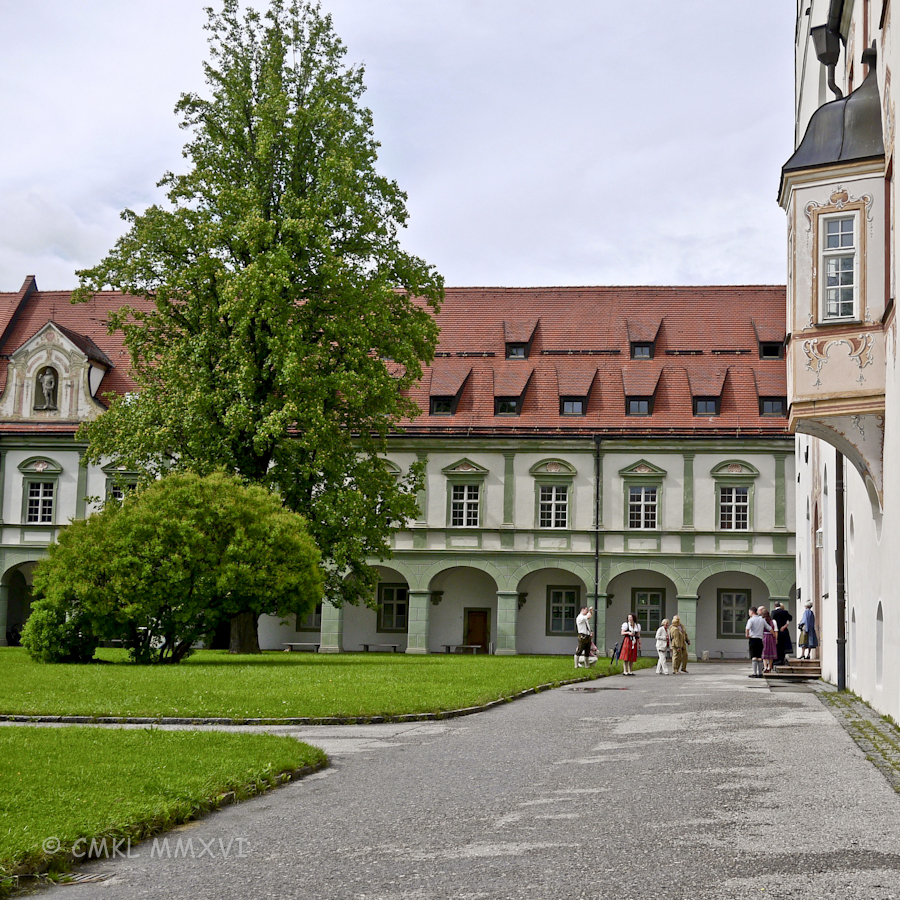 With this image of a wedding party taking pictures of the bridal couple in traditional local dress, we left the Abbey of Benediktbeuern behind and returned to Munich for an unbelievable second welcome dinner at the fun and sumptuous Vinaiolo. 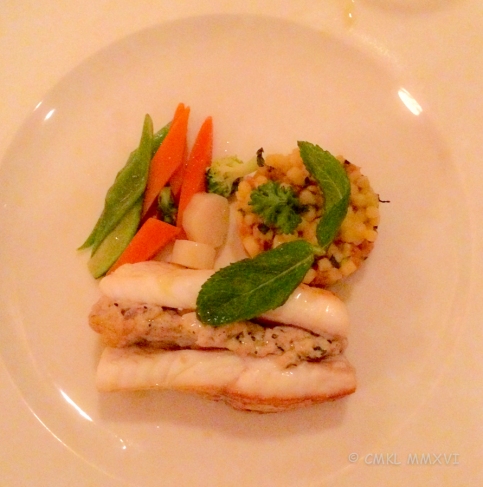 In the evening of our arrival day, our gracious exchange partners had already invited us to a welcome dinner of traditional southern dishes at the Spatenhaus restaurant in the opera square in central Munich. Do look through the photo gallery of their spectacular dining rooms! We were upstairs in the lovely “Grosse Opernstube”. I had Tafelspitz, a dish I hadn’t had an opportunity to enjoy in decades. We were so warmly received in München and so terribly spoilt by our hosts! With deep appreciation, we want to thank you, Karin & Uwe, for your friendship, your time, care and attention, and last but not least the lavish epicurean experiences you bestowed on us. 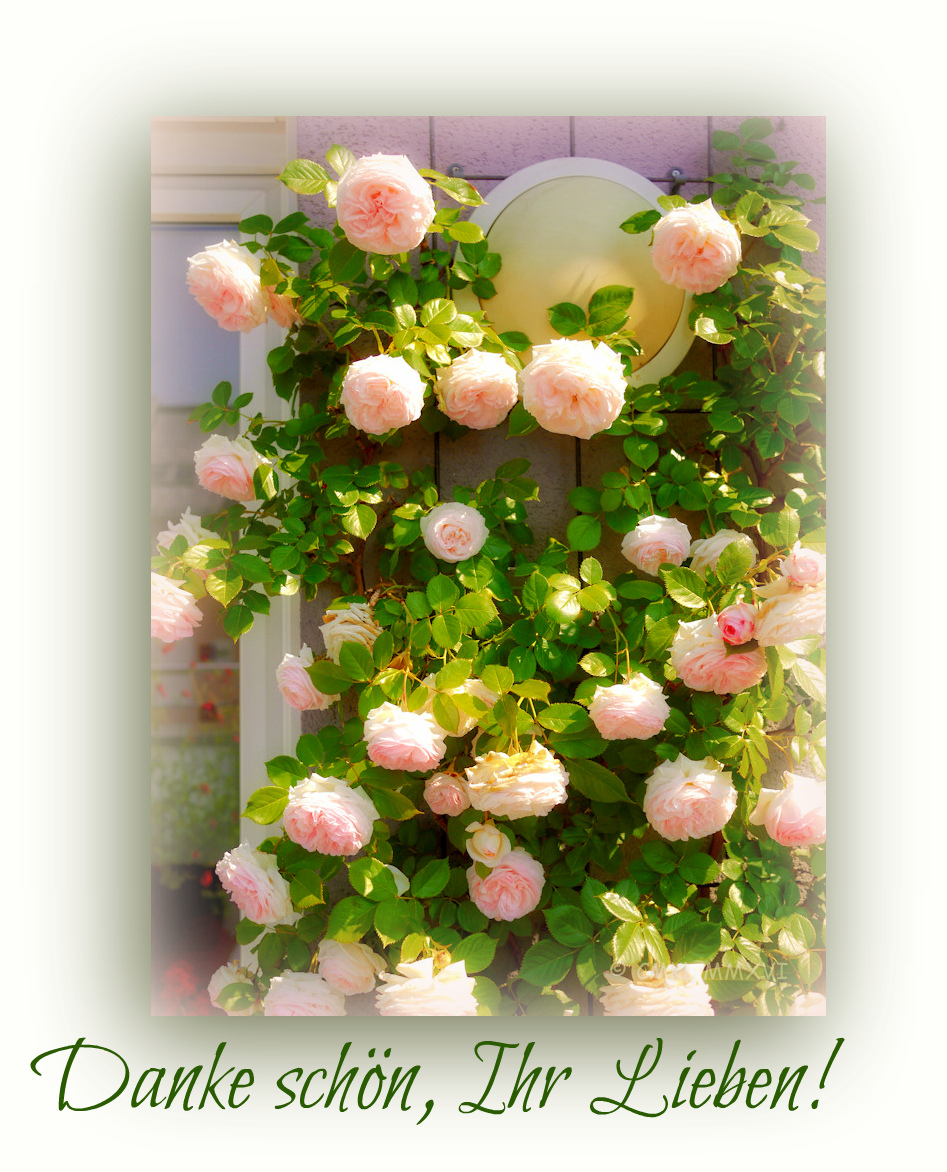