Defined as a line of development without sharp breaks.

Through scientific documentation, we know that the Burghausen hill-spur, the steep ridge rising between the river Salzach and the narrow Wöhrsee has been a handy base for man-made fortifications since 1025 CE. However, if we stretch the “without sharp breaks” rule a little bit, one could postulate that the castle hill has been used as a settlement with natural defense features for 3600 years.

During excavations beneath the current castle’s main dining hall, the Dürnitz, pottery shards and the remnants of a drywall dating to the 16th century BCE were found. Thus proving beyond a reasonable doubt the long-held believe that the castle hill has been populated since the Central European Bronze Age. A thousand years younger fibulae, garment clasps, also recovered from the main castle grounds, as well as antique Roman coinage, indicate that the hill-spur served as a fortification for the Celtic kingdom of Noricum, later an imperial Roman province.

Dürnitz, by the way, means heated room. It was usually a large, rectangular, often vaulted ground floor room of a castle’s main building. It was the common room for the male population, who took their meals here, played games and loitered in comfort. This commissary was warm and cozy owing to its smoke-free hot-air heating system. The ovens were fired from the outside, hence, a Dürnitz had to be at ground level. Above it was usually the audience or reception hall for representation purposes, which possibly received some radiant heat benefit from the Dürnitz below. Since ladies were not supposed to freely mingle with male personages during the Middle Ages, women lived in their own wing of the castle, often referred to as Kemenate. During the late 18th century, when Romanticism bloomed across Europe, and Goethe and Schiller et al propagated the image of chivalrous knights worshipping from afar those chaste [of course!], dainty ladies doing their needlepoint – next to sooty fireplaces. After all the word Kemenate derives from the Latin caminus, fireplace. During the courtly High Middle Ages, the word became kemenâte, while the older term, cheminâta (~500 to 900 CE) resembles the modern chiminée or chimney even more closely. The fact remains that fancy hot-air systems were reserved for the fightin’ boys, while itchy eyes served the feeble and female well enough.

Following Roman occupation, the next known dynasty connected to our castle hill seemed to have been the Agilofings, descendants of the legendary Arian king of the Sueben and Quaden, Agilulf  (420 – 482 CE). The Agilofings ruled over Bavaria from 591, when Tassilo I was elevated to be Rex, to Duke Tasillo III, who was blinded and banned from his realm by Charlemagne in 788. The Agilofing family income was most likely derived from taxing the precious salt barges passing below the castle on the river Salzach.

Subsequent to poor Tasillo’s relegation into cloistered life and while the future Holy Roman Emperor took charge of Bavarian affairs, including collecting the lucrative salt tax, we have again a short gap in documentation. Finally in 1025, the castle at Burghausen is for the first time officially documented as a fortification. At this time, the castle hill is named as the seat of the Counts of Burghausen, whose coat of arms sported a cool red dragon.

Image generated through a google search, possibly from an eBay site

Around 1090, under the counts of Burghausen’s stewardship we see the first expansion of a simple fortification to a residential castle. Traces of this original Palas have been identified in the present main castle building.

In 1177, upon the fall of Heinrich der Löwe, Duke of Saxonia and Bavaria by the grace of Emperor Friedrich Barbarossa, the castle became part of the holdings of the powerful Wittelsbach family, where it remained for the next 600 years.

Fast forward to last weekend. We arrived in Burghausen mid-afternoon, scrambled about for a while trying to get the hang of modern castle logistics and got settled in our apartment. Our first walk through the castle complex, which stretches for over a thousand meters from the entrance gate to the castle keep, led us from the 6th outer courtyard, where we stayed, through three more gated courtyards to the massive and imposing gated entrance of the last courtyard ahead of the main castle structures. Fair warning, though, if you’re not authorized to enter through this gate into the inner castle quarters, your ears might get cut off. Seriously, they weren’t messing around in the Middle Ages! 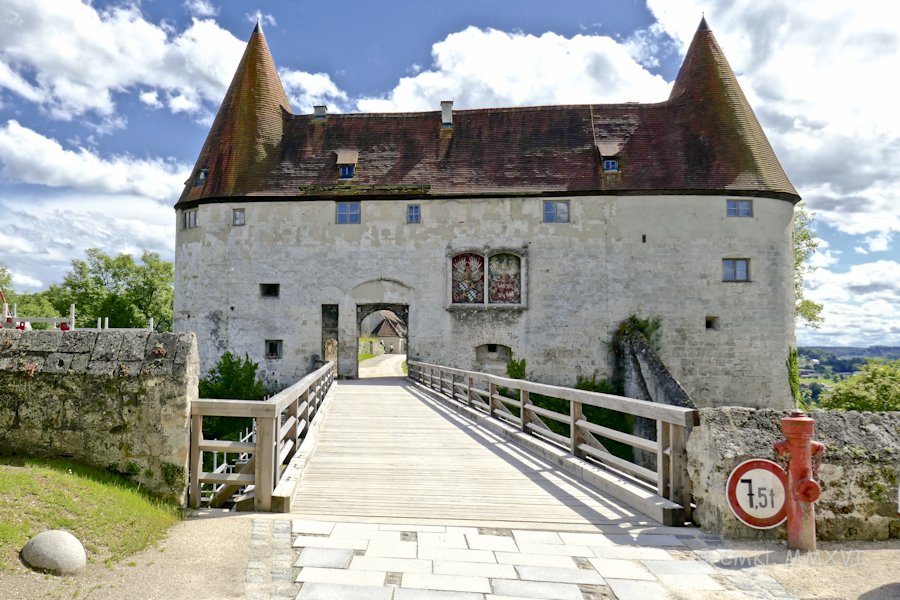 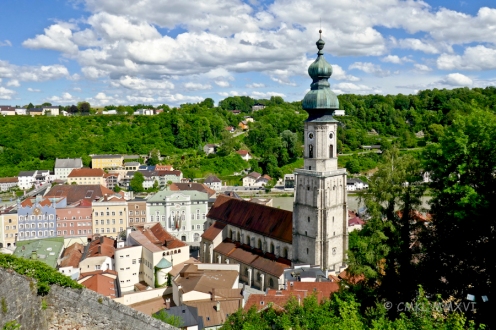 Looking east from the gate bridge toward Austria

The current George’s tower gate dates back to 1494. Its northern façade is decorated with the coats of arms of Duke George The Rich and Duchess Hedwig of Bavaria, Princess of Poland in commemoration of their 1475 wedding.

The famous 1475 Landshut Wedding of 20-year-old Prince George of Wittelsbach-Landshut and the 18-year-old Princess Jadwiga Jagiellonka of Poland and Lithuania was a significant political match for both ruling houses. According to different sources, the marriage developed either into a loving union of two beautiful young aristocrats [Bavarian viewpoint] or into a disaster for the princess, because her groom was an alcoholic womanizer [Polish viewpoint; both opinions gleaned from google material]. The princesses coat of arms above shows both the royal eagle of Poland and the mounted knight of the Duchy of Lithuania.

Since we had official permission to do so, we dared to cross through George’s tower gate and repaired to the Burg Café in the second courtyard of the castle.

After a restorative Weinschorle and a Radler respectively, plus a slice of Icarus cake (each!)

we meandered a little further into the inner keep. 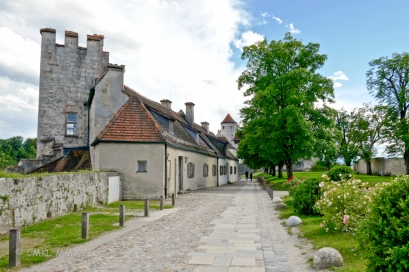 The crenellated tower on the left is the tower of the sentinels, the Stuhlknappenturm. Below the battlement walk were the guard’s apartments.

Tower entry to the inner courtyard of the castle with the gate bailey below.

The “Little Garden on the balcony” bailey. It has been used in modern times as an open-air stage.

Loved the cheerful flowers in the high window

In the castle keep was the access to the main, seven story defense tower. A 5-story wall with original shooting rooms is still intact. 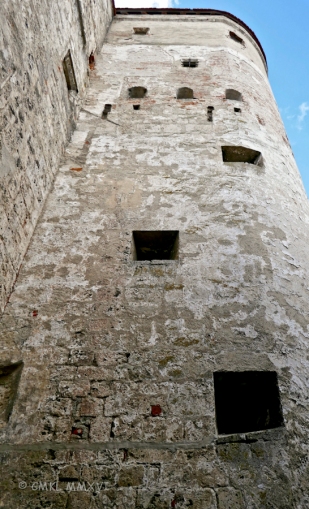 View into the upper bailey or Zwinger, currently closed to the public.

Through the second gate of the keep, we finally reach the inner castle courtyard, which is surrounded by the ducal family apartments, representation rooms, quarters for the members of the household and guards, utility facilities and last but not least the Schatzkammer, the vault for the ducal fortune. 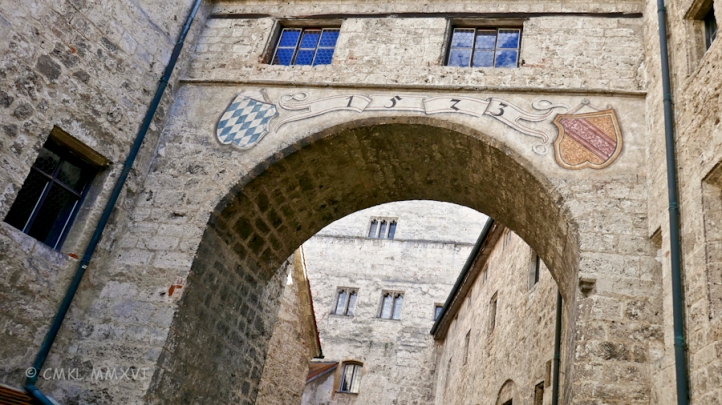 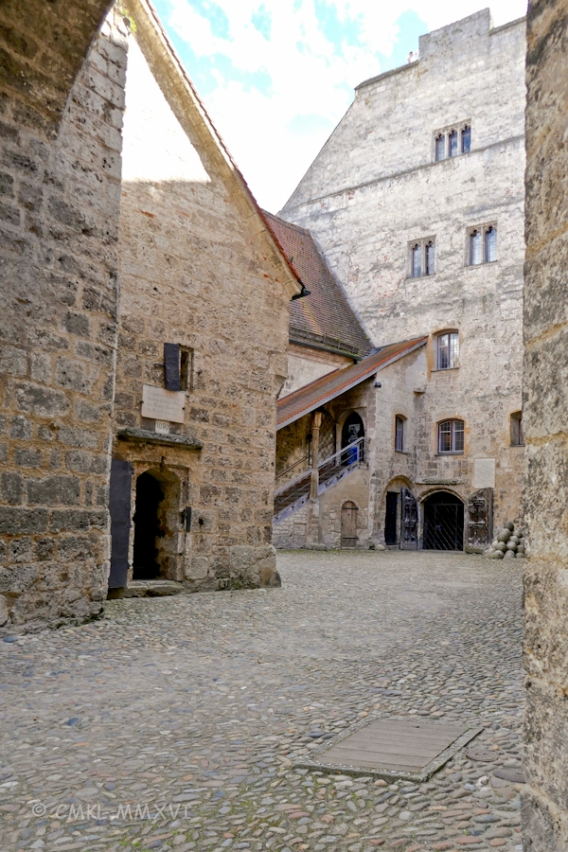 Before we visit the lower bailey, let’s investigate the unusual term Stuhlknappe. This seems to be a compound word constructed out of Stuhl, chair, and Knappe, meaning squire, a rather odd association. Squires that laze around on comfy chairs? Unless it refers to the medieval custom of carrying ladies and sometimes bishops around in palanquins, a kind of chair? Yet a squire wouldn’t have been caught dead carrying such a chair, rather he would have ridden alongside the litter to protect the occupant. Admittedly I have never heard of the term Stuhlknappe before and I had to google the darn thing, which resulted in zero usable information until I entered the plural, Stuhlknappen. This search term yielded an entry in the Bayerische Annalen of 1835 which are housed in the State Library of Bavaria. From those annals, I gleaned that in a 1387 document eight Stahlknappen are mentioned. An annotation explains that Stahlknappen was later misspelled as Stuhlknappen. Stahl is the German word for steel. In this case, it refers to the steel-enforced crossbows these eight sharpshooters used in the execution of their duty. So, from sniper to couch potato in a single typo!

Having successfully solved the burning problem of Stuhlknappen, let’s finally move on to the lower bailey, otherwise known as unterer Zwinger. A Zwinger, meaning kennel in English, is a narrow space between an inner and outer defense walls around a castle or fortification. It was designed to trap potential invaders in narrow confinement [sic], while being overlooked by the much higher inner ramparts, thus making any intruder an easy target. We entered the western Unterer Zwinger through a stairway leading down from the inner courtyard. 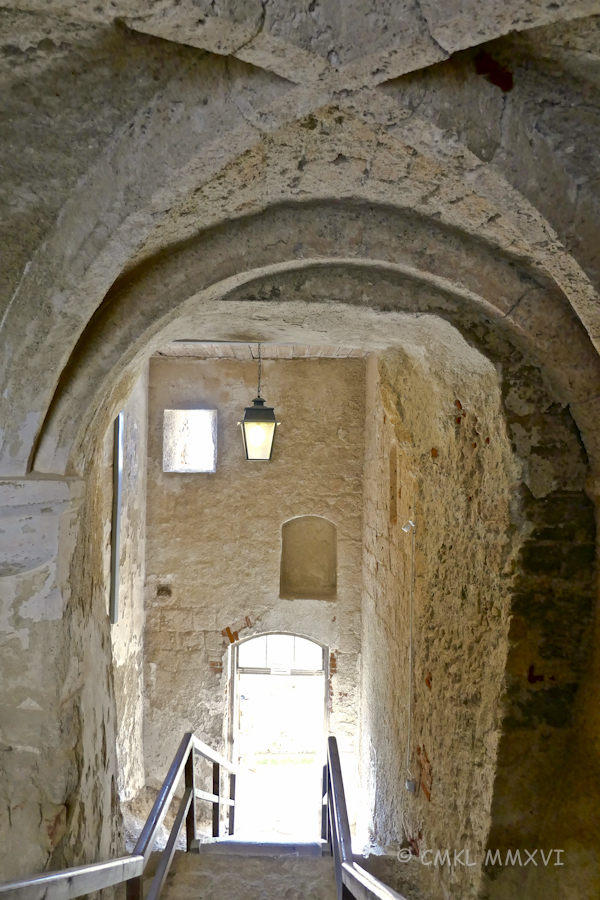 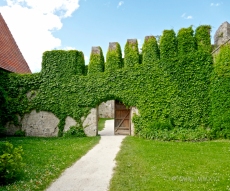 toward this tree, you arrive back in the second courtyard. 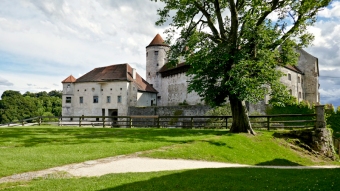 Here was one of 3 horse wells or Pferdeschwemmen in the castle complex. They were needed to care for the over a hundred horses housed in the Marstall, the stables.

We turned back toward home, passing once more through George’s gate, taking a good look at a stretch of the original castle wall. 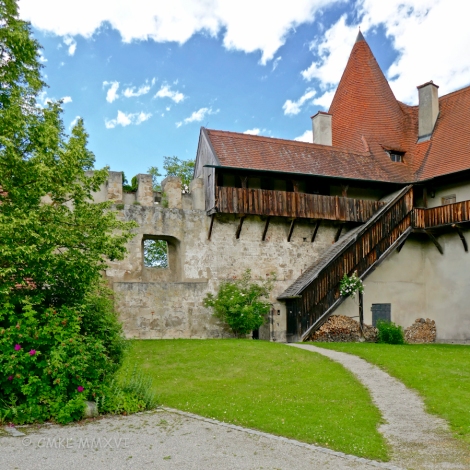 At home, we noticed with delight that we were indeed in Bavaria. Where else would one find that many beer glasses in three different sizes, in an apartment that sleeps four? 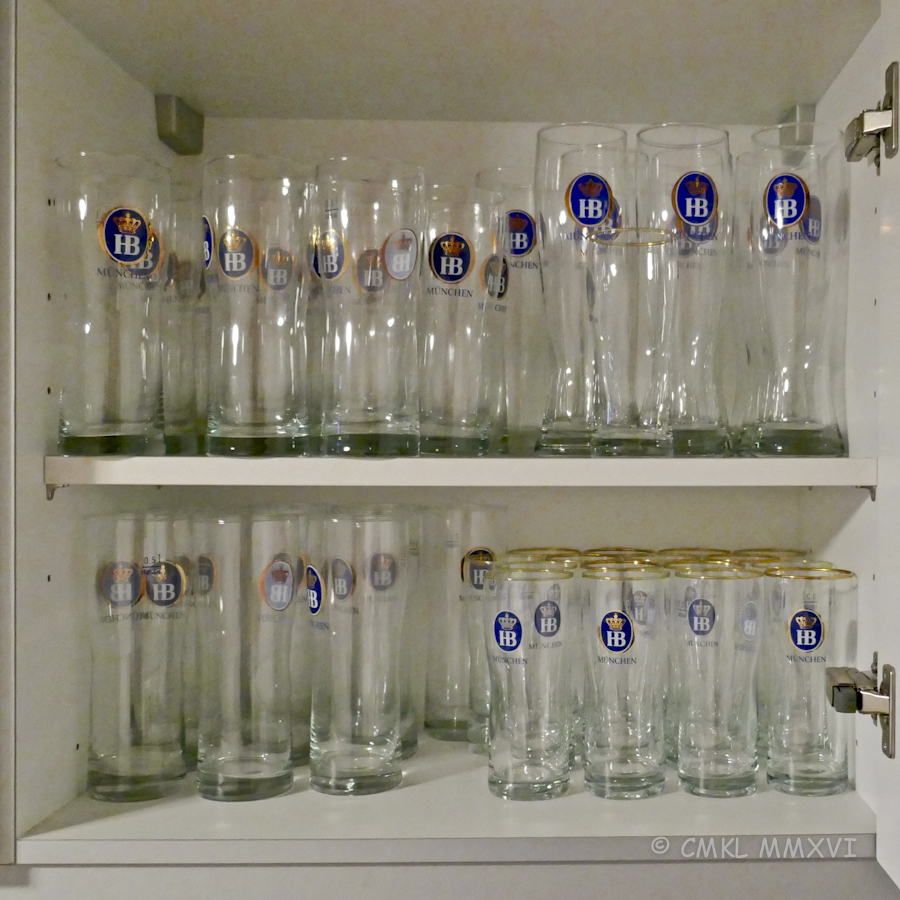