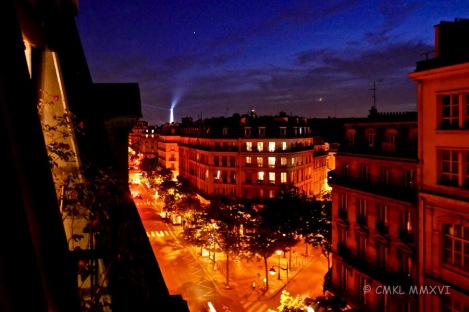 When Les Bleus, the French national team, qualified for the UEFA Championship match [by beating the reigning world champion La Mannschaft, mind you] their fan’s joyful celebrations reverberated through the night. Thus we were a little bleary-eyed when we took the metro to the Île de la Cité the next morning. Our destination on this natural island in the Seine river was the Conciergerie, a big old former palace, and revolutionary prison.

“Our” metro station, clad in copper representing the industrial connection to the museum of Arts and Crafts nearby.

La Conciergerie or the Palais de la Cité in its restored glory as seen from across the river. The 19th-century façade is dominated by four much more ancient towers. The tall clock tower on the left, Tour de l’Horloge was erected in 1350. Since 1370 it has displayed a public clock, the first in Paris, which was decorated quite prettily a hundred years later. The current clock face was installed in the 16th century. The bell in the tower was rung for all important events concerning the royal family.

The twin towers in the center of the riverfront are called Tour de César, in honor of old Julius, and Tour d’Argent, indicating it contained the treasury at one time. These towers were used as offices for court clerks, while the lower floors served as prisons. The tower on the right with the crenelations is the oldest of the quartet, it was built around 1250.

Its name Tour Bonbec is rather cruel. During the Middle Ages, it was used as a torture facility and the prisoners were said to sing like birds with their mouth/beak wide open, in slang a “bon bec”. Against the far horizon, incidentally, you can just make out the Eiffel Tower.

Since the beginning of the 6th century, the palatial complex on the Île de la Cité also contained the living quarters of the royal family. Around about 1360, though, King Charles V decided to move the family across the Seine to the newly expanded Hôtel Saint-Pol and also the Palais du Louvre. Charlie Five was a little sensitive about security in the Palais de la Cité since the merchant’s uprising, culminating in the murder of two king’s counselors in front of his very eyes during the time his dad was an English hostage and he tried desperately to amass a ransom. Having always been sickly, Charles V also abhorred the stench and pestilence of the medieval center of Paris and claimed his health improved tremendously since moving to new quarters outside the [then] city limits. Smart cookie! With and without royal children running through the corridors, the Palais de la Cité was the state administrative and judicial center, the heart of the Kingdom of France, and later of the French republic. The Grand’Salle, the Ceremonial Hall of the kings, was one of the largest in all of Europe. It was there that the kings wined and dined their most important guests and celebrated major dynastic events. Sadly, it didn’t survive centuries of strife, nor ruthless architectural expansion.

But the lower floor beneath the Grand’Salle can still be viewed in all its columned vastness.

This is La Salle des Gens d’Armes, the hall of the men-at-arms, the soldier’s hall, comfortably heated by over-sized fireplaces. 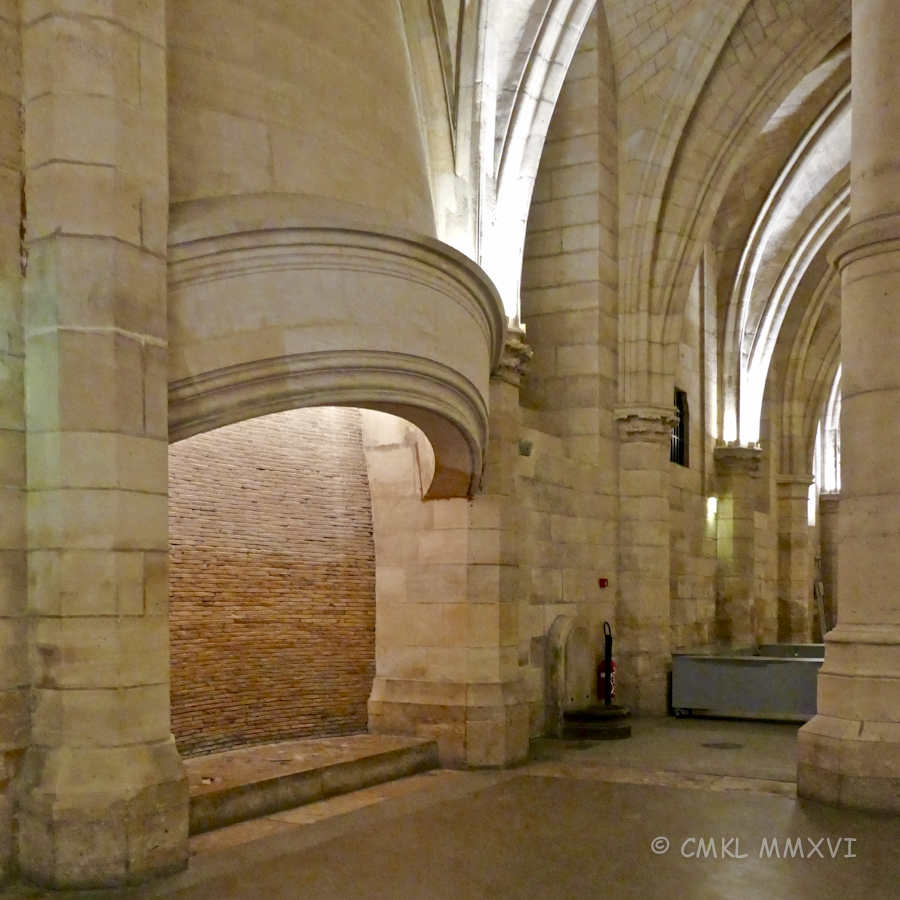 Over time it was used as a giant mess hall, serving hot meals to the more than 2 000 people who worked and lived in the administrative centers and the judicial system. The adjacent kitchen was certainly large enough to handle the demands!

Even though the royal families largely lived in a variety of palaces in and around the capital city of Paris, the kings routinely returned to the Palais de la Cité to open and supervise sessions of parliament and court proceedings and to grace ceremonial and festive occasions with their presence. To assure order, the king, and later the parliament appointed a favorite courtier or a ranking officer to the position of Concierge. Concierge means keeper, caretaker. The person thus honored was in charge of the entire shebang during the king’s absence. This was a very high office, akin to the rank of “Hand of the King” in Game of Thrones, and it was indeed very dangerous as well, especially during the Reign of Terror following the French Revolution, when at least one concierge was executed for misappropriating funds – or more likely, displeasing a yet more powerful entity. The name Conciergerie refers to the complex of royal apartments, ancient parliament, law courts, prisons, garrisons, and Sainte-Chapelle, the royal church under the jurisdiction of the concierge.

And speaking of prisons, this is the location of the infamous Conciergerie prison of the French Revolution. Part of the Conciergerie, like the twin towers, for example, have always been prisons, just as other parts of the Conciergerie have been used as meeting rooms for parliamentary sessions. After the revolution, the Conciergerie was appropriated by the Republican factions and the former Grand’Chambre was used by the revolutionary tribunal as a courtroom in which some 2700 accused were sentenced to death in a little over two years. The condemned were executed right away, usually on the day of their conviction. The main guillotine, which was invented by a physician from Saintes, our current hometown, was located at the Place de la Révolution – today’s Place de la Concorde. That’s quite a distance from the Conciergerie, leaving a nice long ride in a donkey cart for the convicted to be humiliated and spit on by the jeering crowds.

The Reign of Terror only ended when Maximilien ‘The Incorruptible’ Robespierre had become too powerful to be tolerated any longer and was guillotined himself on July 28, 1794. Not soon enough for Alexandre François Marie, Viscount of Beauharnais, the great-great-great-grandfather of a family friend. Viscount Alexandre was executed only five days earlier. His widow was released from prison following Robespierre’s demise and went on the become Joséphine, Empress of the First Empire as the wife of Napoleon I. Such is life.

And lastly a few images of the restored prison quarters in the Conciergerie.