Ante Scriptum: On a dreary Friday morning at 07:00:40 hrs I noticed a flyspeck near the gigantic IMAX screen to our NE.

B. Speck morphed into hot-air balloon

Ante Scriptum II: On a gorgeous Saturday afternoon we walked the neighborhood in brilliant sunshine, sharing the immense shopping centers and dappled sidewalks with a multitude of global humanity, locals, tourists, buskers and sleeping babies alike.

Appalachian bluegrass sounds in the heart of Melbourne

Non-view from the “Female Toilet”

Instructions for use of “Female toilet”

Scriptum: On Sunday we undertook a nearly 8 Km or 5 miles hike, not entirely voluntary I must add. The plan was to take a tram south, from the CBD across the river to a stop near one of the entrances to the Royal Botanical Gardens. But,

meaning: der mentsh trakht un Got lakht, generally known as ‘Man plans while God laughs’. As it happened, a political demonstration blocked the intersection of Collins and Swanston streets and the trams formed chains like processionary caterpillars. Traffic in the CBD had come to a complete standstill. Tram compartments turned into saunas. Paramedics tended to heatstroke victims. 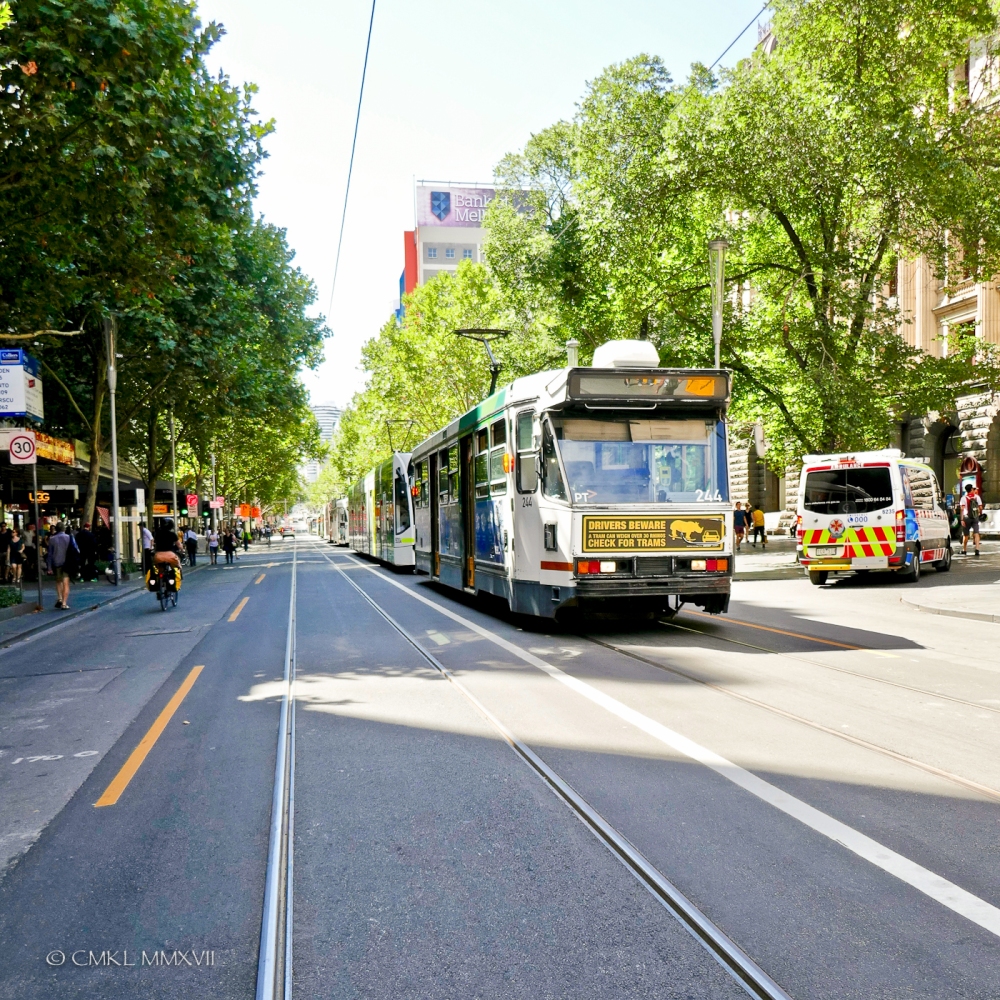 As the sun was beating down on men and beasts,

we quickly decided it was more efficient to hoof it down toward the river and Federation Square, cross the river and walk through Alexandra Gardens. 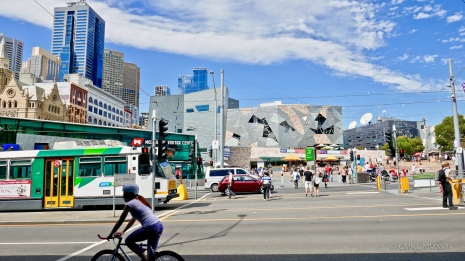 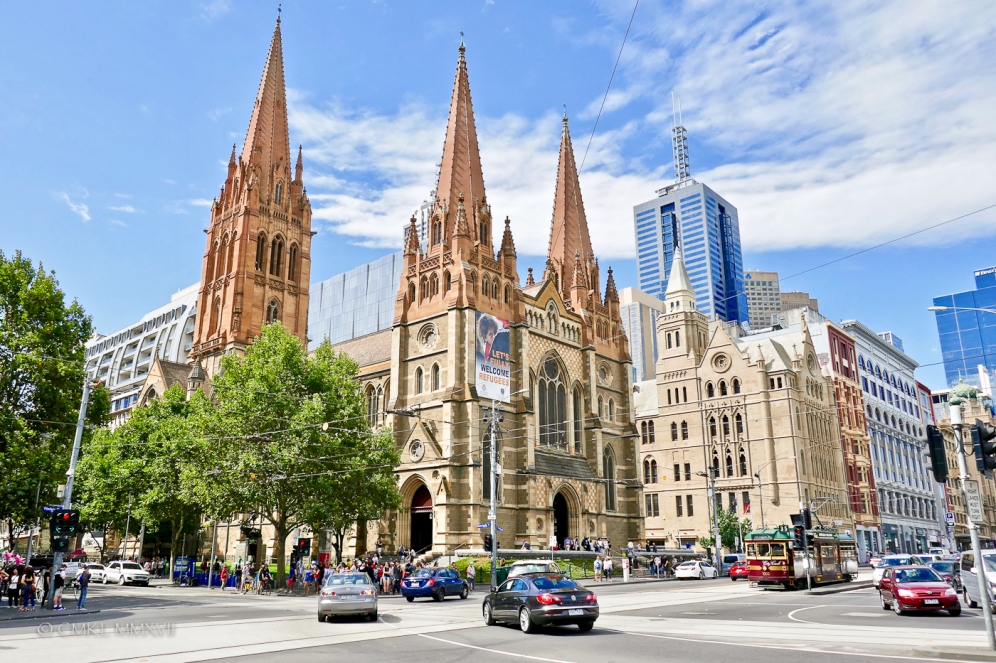 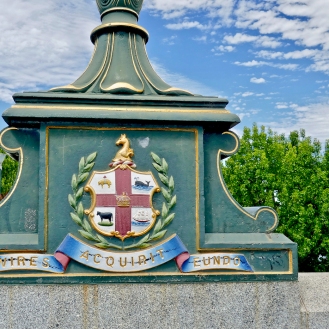 “She Gathers Strength As She Goes” Melbourne motto & flag 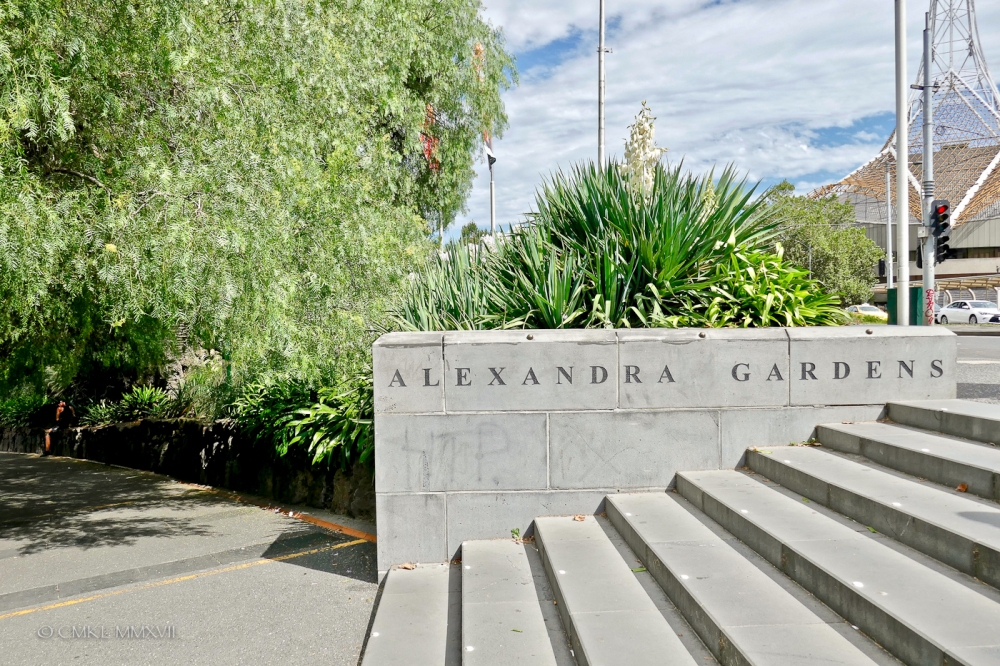 At this point, we had walked a little over two klicks on sizzling city streets. Ahead of us now stretched nothing but green space, the Domain Parklands. This area of 84 ha or 207 acres fills a wedge-shaped zone of the city between the southern bank of the Yarra and an arterial called St. Kilda Street. It’s an immense city park system composed of the Alexandra Gardens [5 ha], the King’s Domain [36 ha], Queen Victoria Gardens [5 ha] and finally, occupying the wide southern base of the parklands, The Royal Botanic Gardens Melbourne [38 ha].

So, I have to give you fair warning ⚠️ From here on in, this post will be just pictures of boring green stuff.

Australian magpie, Cracticus tibicen sp. which are not related to European magpies 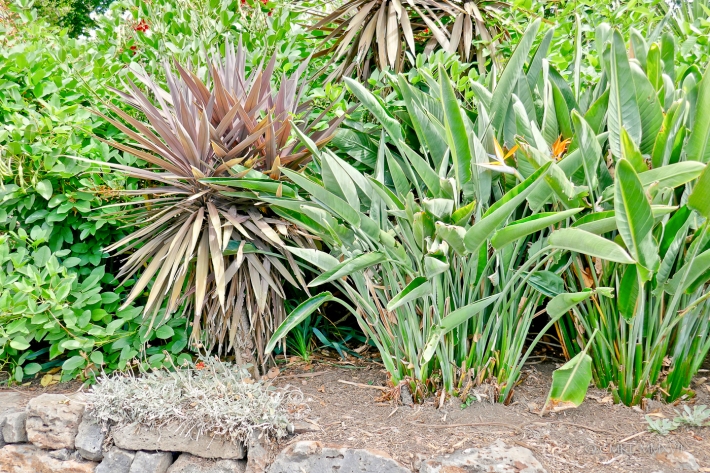 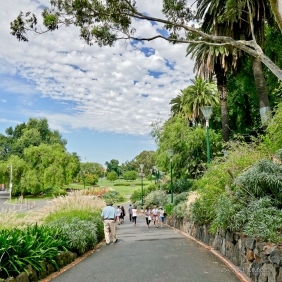 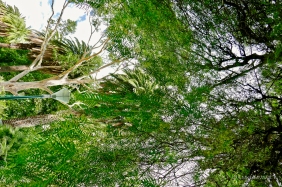 A little aside to this green gorgeousness all around us. In the 1850s during the height of the Victoria gold rush, then barren South Melbourne was home to “Canvas Town“. An ever increasing tent community populated by the thousands of prospectors who poured into Melbourne week after week to seek their fortune. 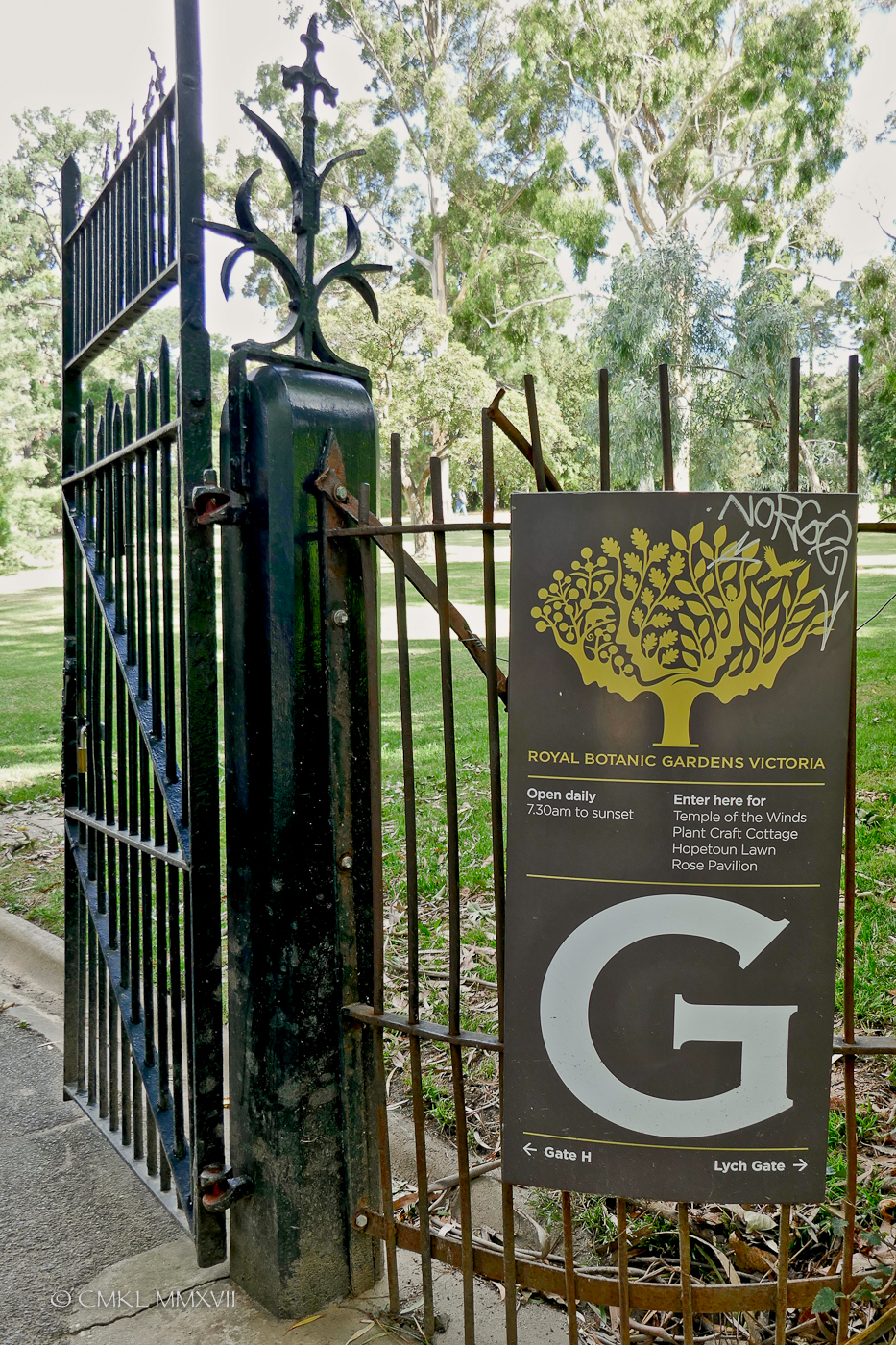 Finally, we arrived at the botanical gardens. From gate G we walked at a leisurely pace along the undulating pathways, before exiting through a gate closer to St. Kilda St. and the blister-saving trams which were thankfully running again.

A great number of trees in Australia are gum trees or Eucalypti. Many mature eucalyptus trees have a smooth bark like the lemon scented gum below. 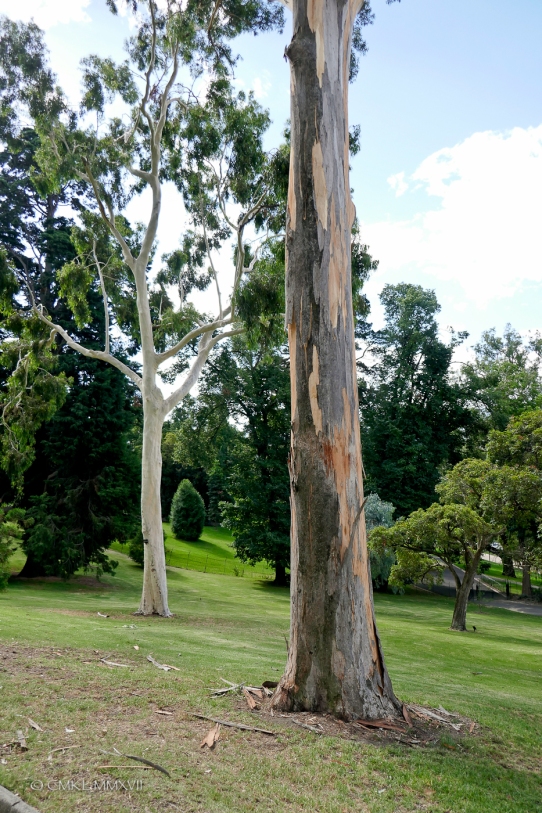 Whilst some other gum trees lose their bark in ribbons or patches, and yet others pile on thick layers of deeply ridged new bark every year, especially around the tree base. This thick bark may become darkly stained from sap or gum which leads to charming names like ‘blackbutt’. 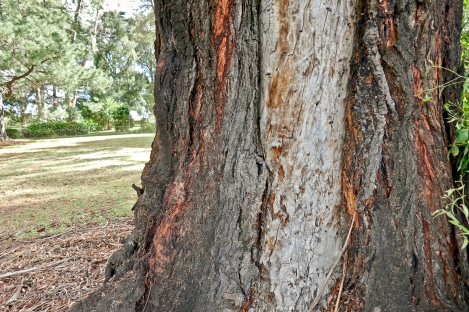 Not a eucalyptus for a change, rather a Castanospermum australe, Fabaceae, the Moreton Bay Chestnut or Blackbean. A native tree of Australia and Vanuatu with strikingly bright and large flowers, poisonous chestnut-like fruit and beneficial iminosaccharide deposits in its leaves.

And then we came to another giant, the Araucaria bidwillii or Bunya-Bunya, 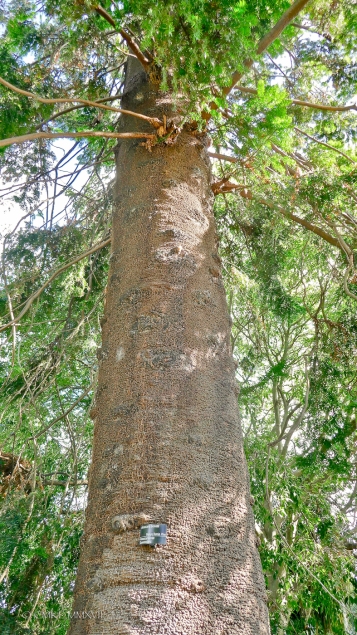 a very tall coniferous evergreen native to Queensland. The Europeans called it a pine tree, but it’s really a monkey puzzle tree. Their cones are huge and can weigh as much as 18 kilograms. These macropods are often opened by cockatoos and the seeds are dispersed by bush rats and possums.

We rested for a while under this Quercus canariensis, a Mirbeck or Algerian oak tree that, despite its name, is no longer found on the Canary Islands. This specimen here, planted in 1895 seems to be doing well. Another grand old Algerian oak in the Royal Botanical Gardens, called Lady Loch’s Oak, split in half on November 15, 2007, sheared apart under the weight of her giant limbs 118 years to the day after her planting by Lady Loch, the Governor’s wife. Experts think the sustained drought at the time facilitated the death of the tree.

Below, some more amazing assorted plants and biotopes we encountered in the Royal Botanical Gardens. 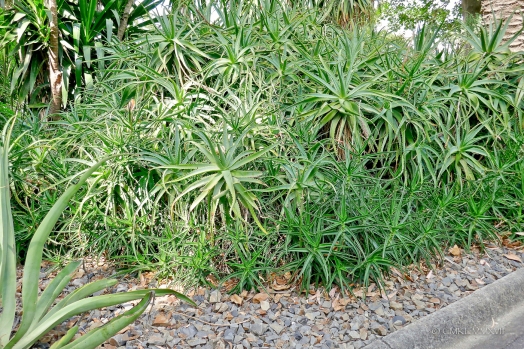 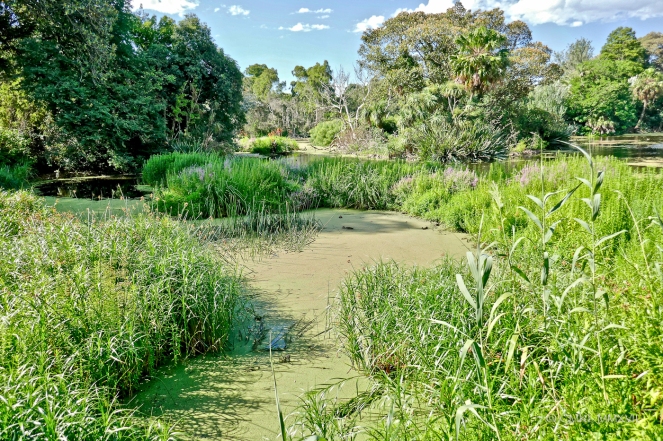 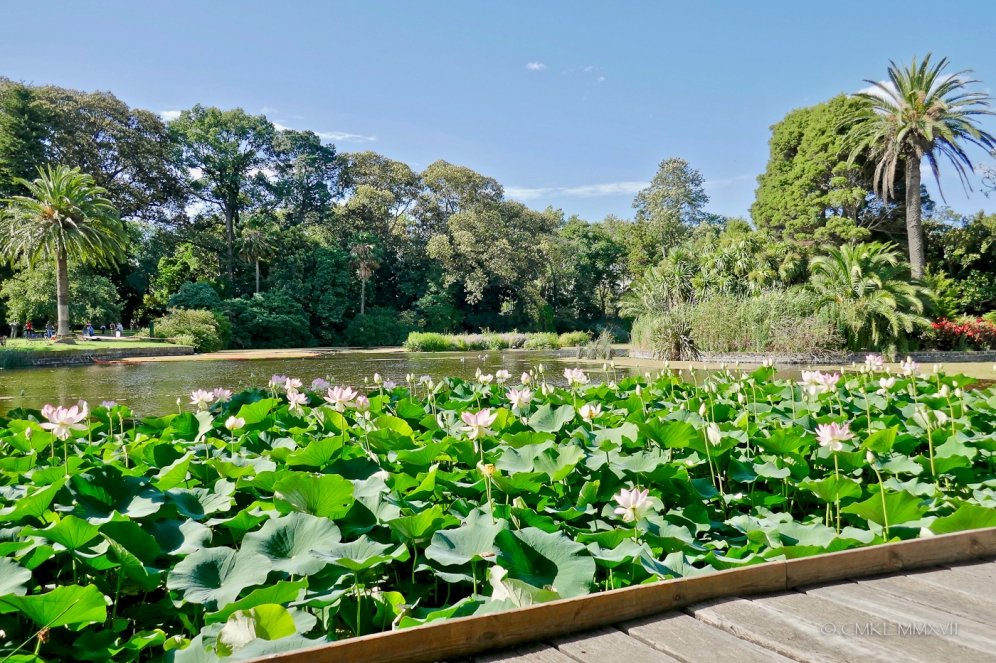 The perennial aquatic Sacred Lotus, Nelumbo nucifera, is native to Australia and tropical Asia.  Contrary to common belief, N. nucifera is not related to water lilies. Lotus has great significance across Asia in regard to culture and belief systems, as well as food and pharmaceutical uses. And it may possibly live indefinitely. 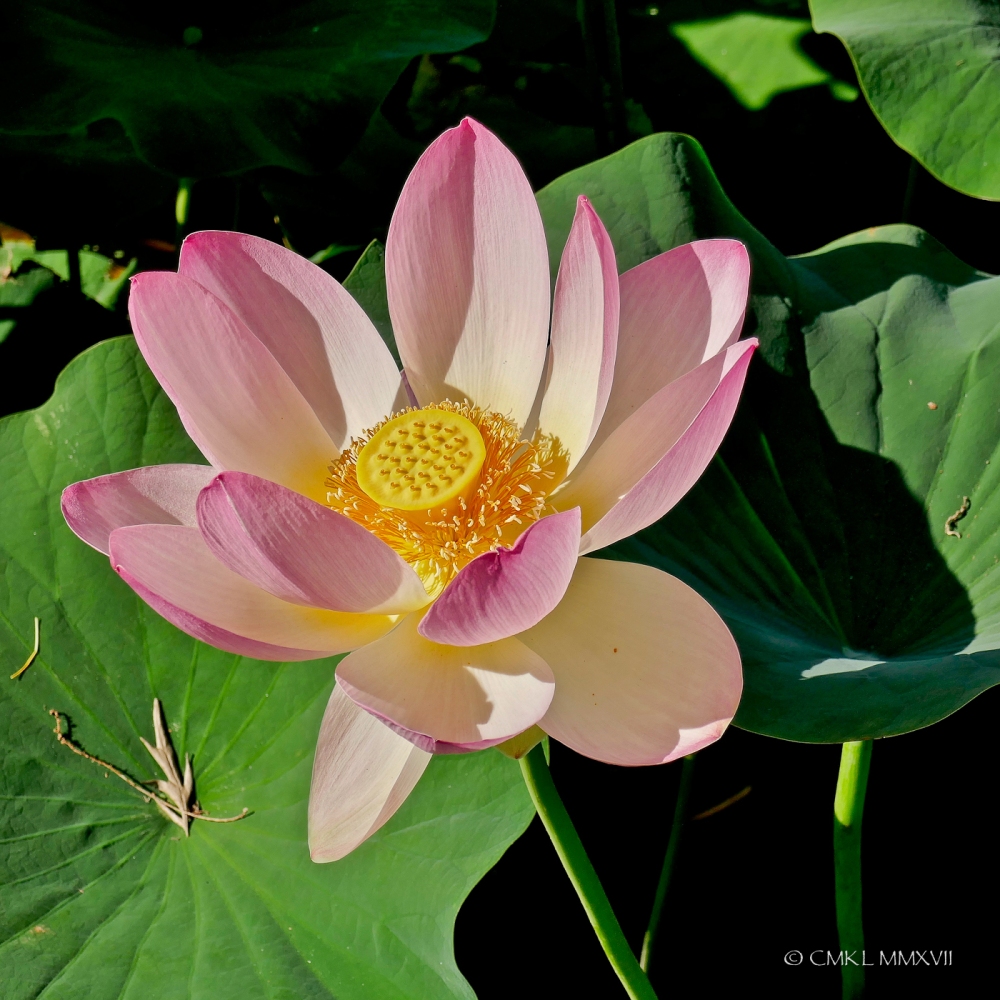