Shall we explore Hong Kong Island a little today? Ride the Central-Mid-Levels-Escalators and perhaps visit the oldest wet market on the island? 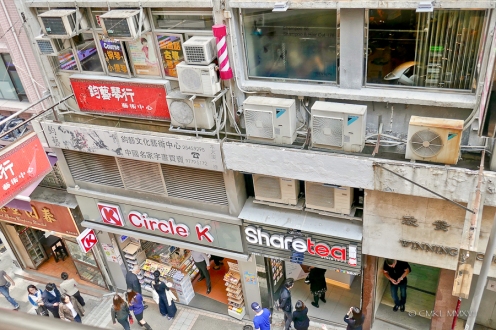 It’s all in the perspective!

Being moved past the purple building on the left …

… and below it two levels of shops!

Looking straight, looking up, or looking down, the hills of Hong Kong Island are an amalgamation of life, color, and sound through which we were transported on the constant motion of the people mover ribbon. As if we were riding a paternoster in a multi-storied store that passes by the different departments on consecutive floors, we were shown glimpses of different neighborhoods at each consecutive intersections.

But eventually one reaches the upper terminus of the escalators and then one must walk back down under one’s own power. Or you can wait till early the next morning when the escalators reverse direction to bring tens of thousands of office workers down into the central business district.

Walking past the largely residential sections of the Mid-Levels district that separates Victoria Peak from the Central district, we spent hours slowly moving through the rabbit warren of steep lanes of the upper Central hills, eventually making our way back down to the corner of Jubilee Street and Queen’s Road from whence we started out on the escalators that very morning. 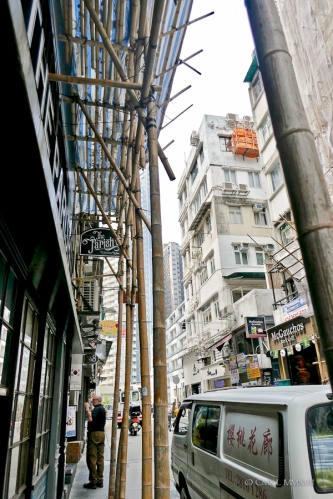 About to enjoy a late lunch in this tiny Korean place. 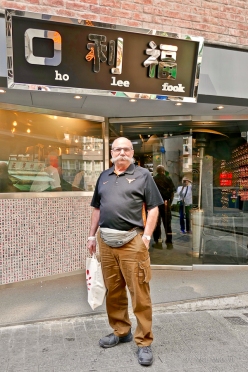 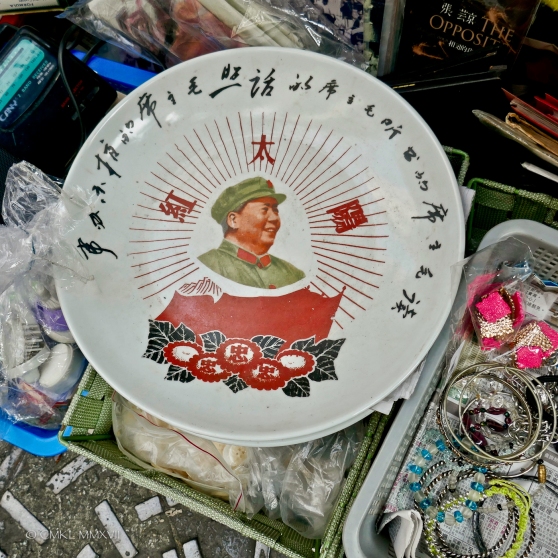 At a flea market, I came across these lovely Mao plates, reminding me so vividly of a former aristocrat-turned-Maoist boyfriend of my misguided youth. I deeply regret that I didn’t buy at least one of them in dear Gustav’s memory. Our suitcases were so heavy already, one soup plate wouldn’t have made any difference. Oh well, such are the decisions one makes – in regard to boyfriends and tableware alike.

Out of curiosity we climbed these stairs and walked along Man Hing Lane past the potted palms on the right, discovering a tranquil courtyard surrounded by tall apartment buildings most of which were in need of a cosmetic make-over. The centerpiece of the garden was an exercise area for old people. How appropriate! 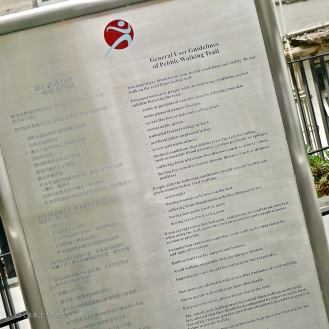 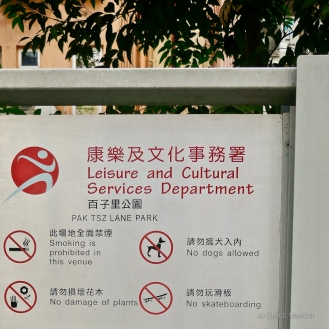 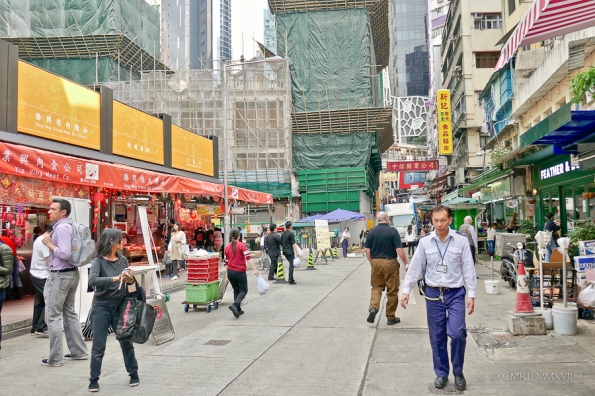 … he does attract attention!

Eventually, we reached the Graham Street Market which encompasses a roughly 5000 sqm area between Peel and Graham streets, including the Gage Street meat market section seen above. Market stalls on both sides line the narrow roadways between Queens and Hollywood roads. Additionally one finds many small businesses in the ground floor spaces of the old buildings framing these streets.

Out of their legendary green tin stalls, the Graham Street Market vendors have been selling produce, seafood, meat & poultry products, dry goods, herbs & spices in continuous operation since 1841, which makes it the oldest wet market in Hong Kong. There are flower vendors, bakeries, Chinese medicine pharmacies, noodle shops, BBQ stalls, booths or shops for candy, hair ornaments, amulettes, hardware & small household items, traditional clothing, and even small supermarkets, not to mention the occasional t-shirt hawker. It is and always has been a lively neighborhood!

Till 2009 the now-defunct Central Market Hall off Queens Road was part of this incredible sales force serving Hong Kong for over 175 years. The vendors, many of which are members of families who have been in the trade for generations, provide a trusted shopping opportunity to individuals and families who live and work in HK Central and in the Mid-Levels. The market also supplies restaurants and businesses.

But not for much longer. 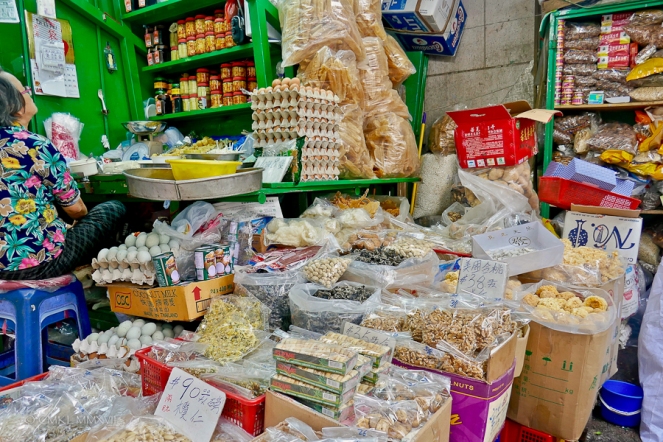 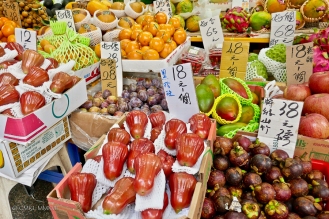 The Graham Street Market area is a unique part of modern HK Island. It consists of mostly low-rise housing, old and inefficient buildings in dire need of repair and restoration. Instead of the costly task of rehabbing this historically important traditional neighborhood, the Urban Renewal Authority of the HK Government announced their plan in 2007 to demolish the entire Graham Street Market area to build residential high-rises, hotels, and office towers. The process has begun, several blocks of houses have already been turned to rubble and traders are scrambling to relocate, having to fire employees in the process. Most remaining Graham Street vendors are already reporting a reduction of trade volume by 20 – 50% owing to the construction work in the area. The spiffy new skyscraperscape will include a market hall, just as the URA promised. Sadly there is only room for eleven traders. There will be fresh fruit and vegetables, fish and meat for sale, but there will no longer be noodle shops or a pharmacy, or dry goods vendors selling rice, nuts, and seeds, let alone fermented tofu. In just a few more years, a large section of Hong Kong Island’s charm and character will be gone, together with salted duck eggs, which are duck’s eggs brined in a salted charcoal paste, hence the black coloring. Delicious with congee. Then again, who still eats congee, right?

Descending first to Wellington Street, we soon arrived back down in Jubilee Street and thus near our favorite local restaurant, just a few steps from home. Queen’s Street, and even more so Des Voeux Road, show all the splendor of a revamped and shiny business center in a major metropolis, personified without any doubt by our current neighbor, the magnificent IFC Mall. 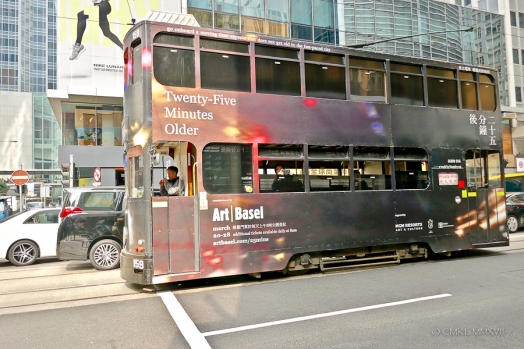 Why can’t we have both, I wonder? Old, grown, micro-cosmos neighborhoods AND the glitzy, fast, contemporary business centers?