As the first millennium of the Common Era neared its conclusion, an enterprising young man selected a large and steep rock outcropping alongside the quite unimpressive Charente tributary Tardoire to construct a wooden encampment for his troops. He chose well, the camp was easy to defend and the river provided water for men and horses. He decided to stay, as did his descendants for the next one thousand years or so. His name was Fucaldus, a man of noble birth, possibly kin to the House of Lusignan. Legend says, he called the camp “Fucaldus in rupe” Fucald’s rock, which soon morphed into “de La Roche” [rupe = rock or cliff in Latin; la roche, le rocher, le roc = rock, boulder in French; de la Roche = of the rock]. The next generation, possibly Adémar de La Roche (952 – 1037) began with the construction of a square stone donjon surrounded by a stone wall thus taking the first step from wooden camp to the founding of a dynasty eventually called La Rochefoucauld.

This is how Fucald’s camp presents itself today. A smidgen more elaborate than its humble beginnings!

As you arrive in the present-day village of La Rochefoucauld, Charente, the castle is indubitably its in-your-face focal point. Nevertheless, at this point, we were more interested in lunch which we enjoyed on the shaded terrace of ‘Chez Steph’, a local bistro with a great view of the castle. If you take a closer look at the stonework and other details of this meticulously restored row of townhouses, you’ll realize that they are equally as ancient as the castle across the river. 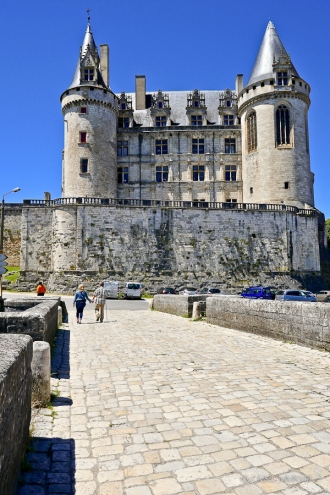 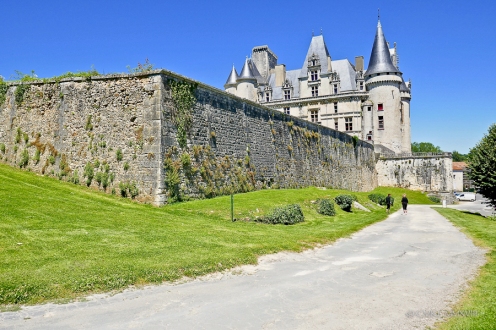 The twin towers have faithfully guarded the main gate of the castle, including a drawbridge that once formed the only entrance to the château de La Rochefoucauld. In 1350, Aimery de la Rochefoucauld could afford to build the strong guard towers when the new Valois king, Jean le Bon, raised his annual salary as a member of the King’s Council. This would become a theme among the La Rochefoucaulds. With each victory on the battlefield or raise in status, the castle was enlarged or remodeled. Possibly the most significant and extravagant work was commissioned in the fifteen-hundreds by Duchess Anne de Polignac, wife of François II de La Rochefoucauld. Cognac-born French king François I, a contemporary of Anne de Polignac and a close friend of the La Rochefoucauld family is said to have gifted the Lady Anne with drawings by his beloved protegé Leonardo da Vinci, who had died so recently in the king’s arms. These drawings may have included sketches of arcades in the Renaissance style and a grand staircase of monumental dimensions.

One enters the castle courtyard through a fortified tunnel beneath the towers. The cobbled passageway is quite narrow, not allowing large groups, especially on horseback, to enter the castle courtyard simultaneously. Defending home and hearth was of paramount importance in those dangerous days of constantly shifting alliances during the Hundred Years’ War. From the tunnel, we catch our first impression of Anne de Polignac’s da Vinci inspired Renaissance vision. 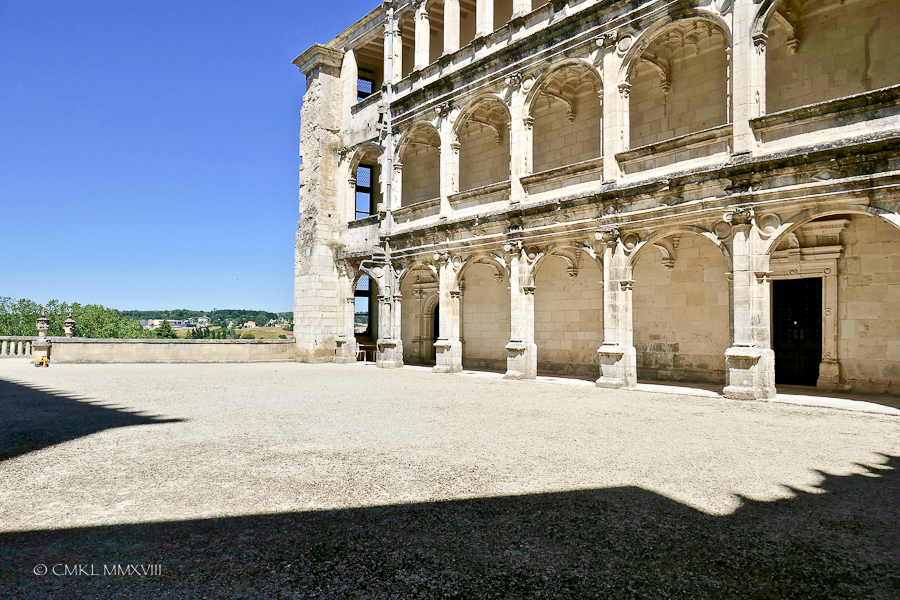 Three levels of arcades form galleries in the eastern and southern castle wings. The northern wing of the castle was never built, while the western wing, now used as a private home by members of the La Rochefoucauld family, burned down and was less spectacularly rebuilt two centuries later. As you look at the Cour d’Honneur de la Duchesse Anne in the picture below, you have to imagine the court to be landscaped as a cortile, a beautiful formal garden in the Italian Renaissance style framed on three sides by the evenly spaced arches and pillars of the arcades.

An especially beautifully carved doorway leads into the family chapel.

Several salons in the Château de La Rochefoucauld are open to the public. They certainly are grand and impressive, but the warm wood paneling, the family portraits and photos of family and friends [I think, I recognized Lee Radzivill, Jacqueline Kennedy Onassis’ sister in one of them] and tchotchkes and mementos impart a cozy atmosphere. Thus, we tiptoed through rooms which seem lived-in and private. 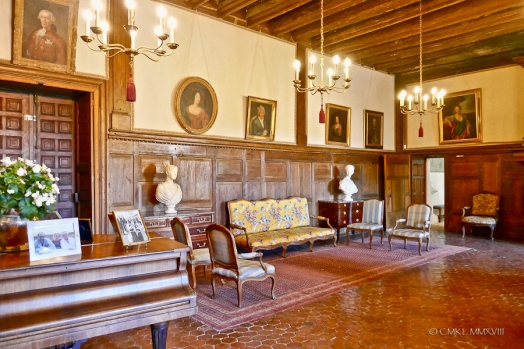 A table in the main salon displayed a model of the castle under an acrylic cover. It shows the proposed contemporary re-design of the destroyed original stone donjon. The famous Chinese-American architect I. M. Pei has donated his design to the La Rochefoucauld family. Fund-raising for the new glass donjon is ongoing.

The splendor of the grand salons contrasted with charming nooks here and there, recesses and small rooms lovingly decorated in artisanal details. 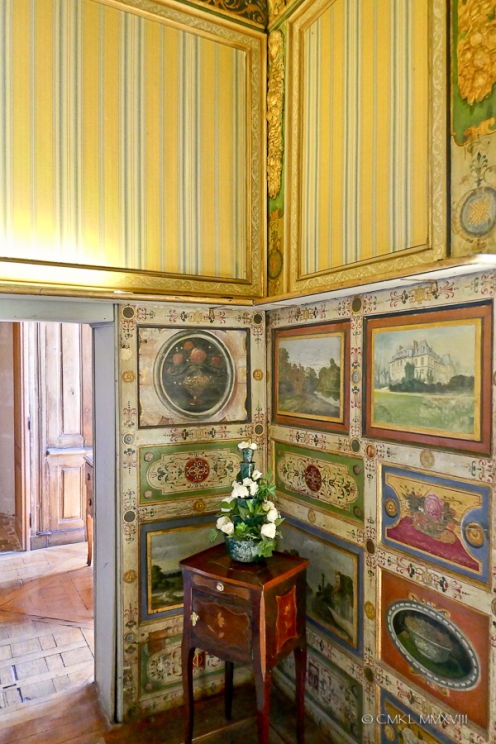 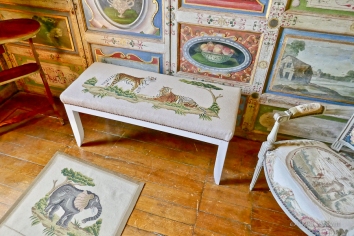 Dowager Duchess Sonia Marie Matossian de La Rochefoucauld who lives across the cour d’honneur in the family wing, described in an interview how the family undertook the renovations of the castle some twenty years ago after it had been unused for over a century. She lived without electricity, sleeping on a mattress on the bare floor to get the work started to preserve her children’s heritage.

To move from floor to floor in the castle, one dashes up or down the utterly amazing helicoidal grand staircase, its 108 stone steps connecting the three main floors with the lower levels of the castle. 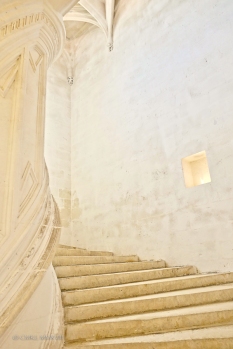 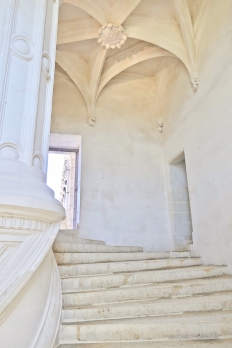 When you step through the top doorway shown in the picture above, you enter into the third level gallery.

This gallery has narrower arches, each one crowned with a mock gable containing a large, scalloped shell. I learned that these cockleshell ornaments were not symbols of the St. Jacques pilgrimage, as I thought, but echo the delicate half-shell carrying the Goddess Venus ashore – at least in Botticelli’s imagination. Rennaisance, not religion!

At this level, we could also view the “good” side of the donjon. The foundation goes back to the early 11th century, while its full height wasn’t achieved until 1453.

With a last look at a murder of crows circling the 15th-century tower complete with defensive machicolations, we headed back inside for a library tour. 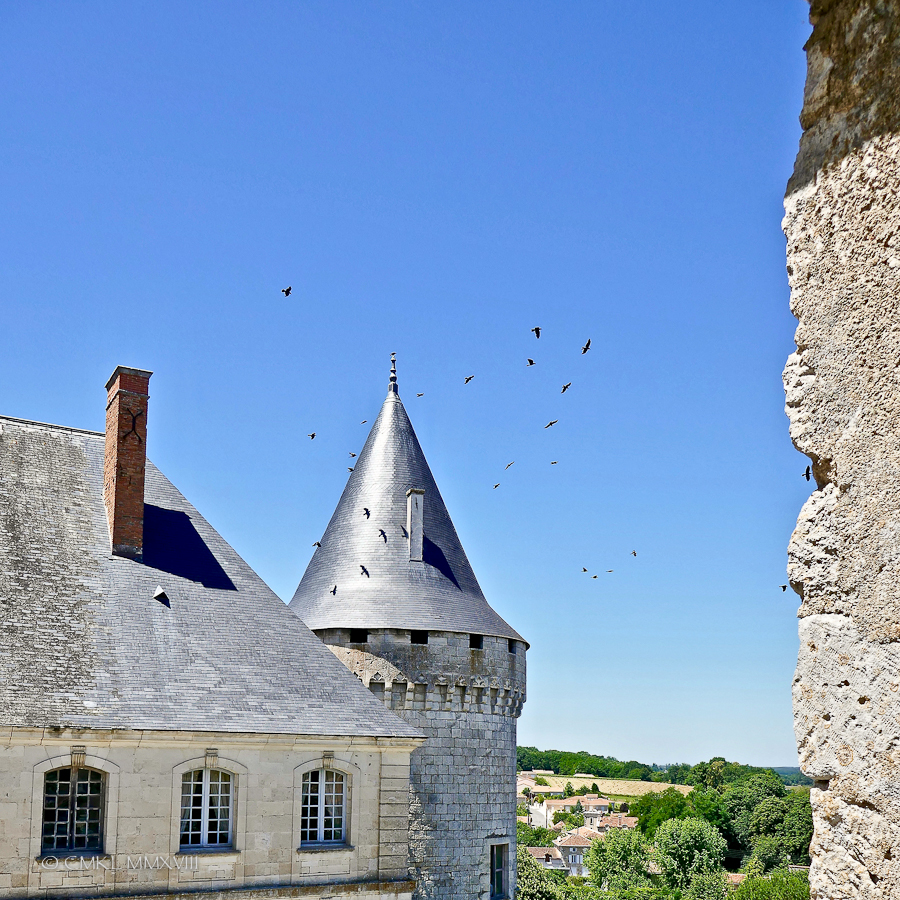 Our most elegant and erudite volunteer guide gave an overview of the achievements of members of the La Rochefoucauld family in regard to their advancement of knowledge over the centuries, often in direct disobedience to Church and Crown. The four libraries at the Château de La Rochefoucauld alone house well over 20 000 volumes, among them rare and unique editions. 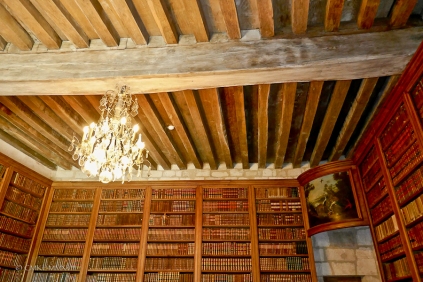 The libraries are outfitted with under-floor heating to provide the appropriate ambient temperature year-round to preserve the books in good condition. There is a volunteer brigade which cleans every single book on a rotational schedule! Our guide also presented several ancient household documents from the family archives.

Now that we’ve seen much of the upstairs, it is time to visit the below-stairs realm of Château de La Rochefoucauld. The beautifully restored double kitchens were huge, sporting back to back walk-in fireplaces large enough to roast entire oxen, as well as an incredible array of highly polished copper pans. 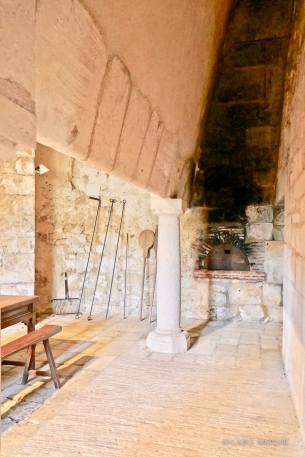 In the rear kitchen with its bread oven, we also saw several wooden refrigerators, or better “ice chests” as they were meant to take large blocks of ice in the upper compartment for cooling the perishables stored below. I actually remember the “icemen” from my childhood who delivered two to three feet long blocks of ice to businesses in my neighborhood. They balanced the ice precariously on one shoulder, manipulating it with large iron hooks. 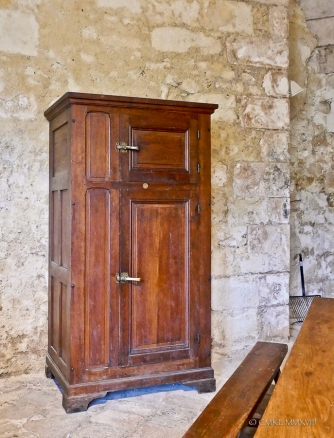 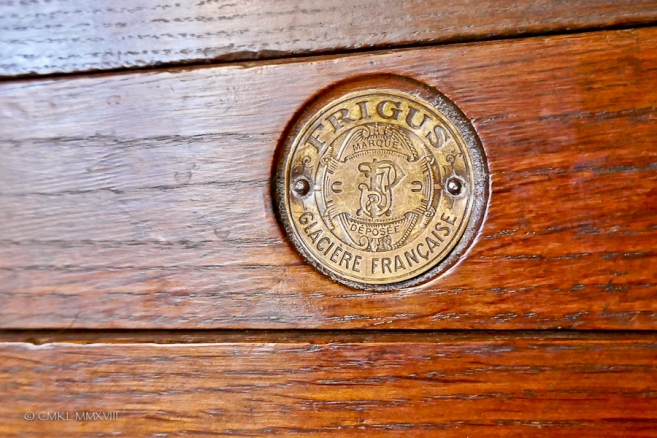 We checked out a former guard hall opening onto a spacious terrace overlooking the town. These gorgeous basement spaces with vaulted ceilings and cobbled floors are now used for events. 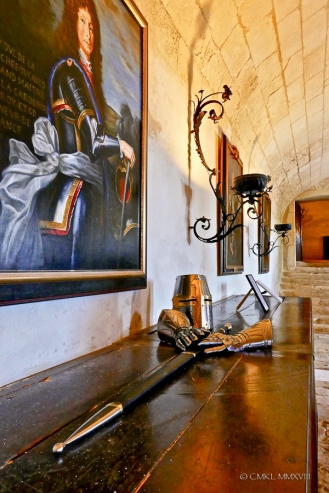 Making our way back up Leonardo’s staircase to the cour d’honneur, we said goodbye to the Château de La Rochefoucauld.