Sarlat, which has morphed into the poster-town of French Renaissance urban architecture, almost didn’t make it into the 21st century. As the town’s fortunes waxed and waned over the centuries, the ravages of time, general disinterest and neglect nearly destroyed what once were astoundingly proud buildings in a provincial town that, for a time, had fallen out of favor. Luckily, André Malraux came along. As Minister of Cultural Affairs, Malraux, novelist and philosopher in charge of preserving and advancing the cultural heritage of La France did for Sarlat what writer and thinker Prosper Mérimée did as Inspector-General of Historical Monuments a hundred years earlier for my beloved l’Arc de Germanicus in Saintes. Both men saved precious historical witnesses from the arbitrary vandalism of an uncaring citizenry.

Images of Tilleuls, lime trees, trimmed during the winter to within an inch of their lives, have become the quintessential image of a French town for us. And, sure enough, they greeted us when we parked in Sarlat-de-Canéda to start our exploration of this famous town in the Périgord Noir. 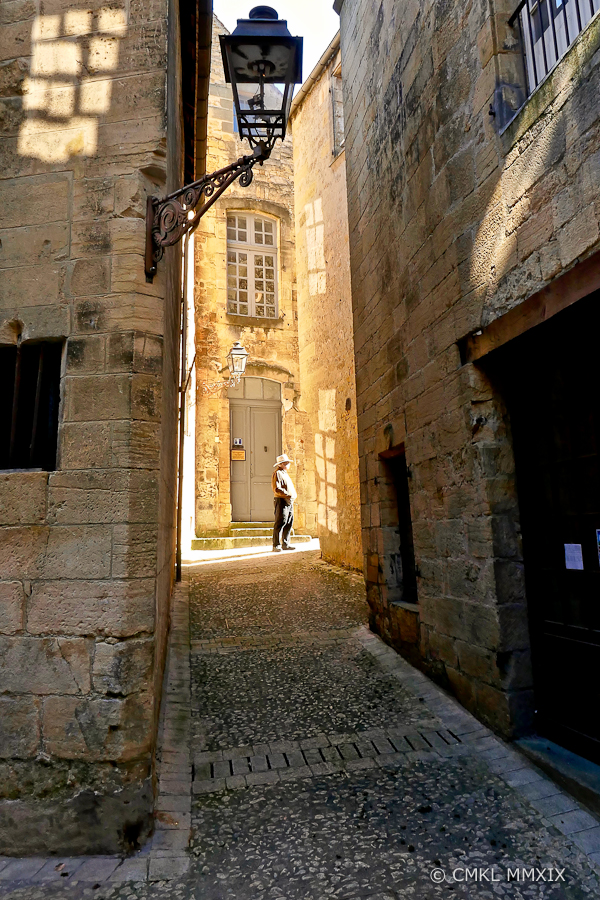 Just a few steps further up a narrow lane, we gain sight, across a neighbor’s home renovation, of the rear façade of la Maison du Présidial, the former royal courthouse, now a fancy restaurant.

The royal courthouse was first established by King Henri II [1519 – 1559], younger son of King François I, famous last patron of Leonardo da Vinci, and his consort Queen Claude, Duchess of Brittany and Milan, among other titles. That poor Claude! Next to her tall and elegant husband, she was of short stature, afflicted with scoliosis and strabismus and perpetually pregnant. During her scant ten years of marriage, she bore seven children. She died at age 24, presumably of exhaustion. But we must return to Claude’s second son, Henri, who after his elder brother’s death inherited the Duchy of Brittany and eventually the crown of France. Unfortunately, not much is known of either the court building itself nor the court’s proceedings during Henri’s time. Records indicate that the Présidial in Sarlat later functioned as a rival court to the one in Périgueux. From 1641 up to the French Revolution, it was quite a busy court with nine barristers and two royal advocates handling civil and criminal cases under the watchful eyes of the Court President and his Lieutenant General. Since 1944, the building is protected as a historical monument, specifically including its funky Lanterneau, its skylight.

We continued to meander through crooked, cobbled lanes, taking in the atmosphere in solitude. It’s so much more pleasant to go sight-seeing in February than in July! 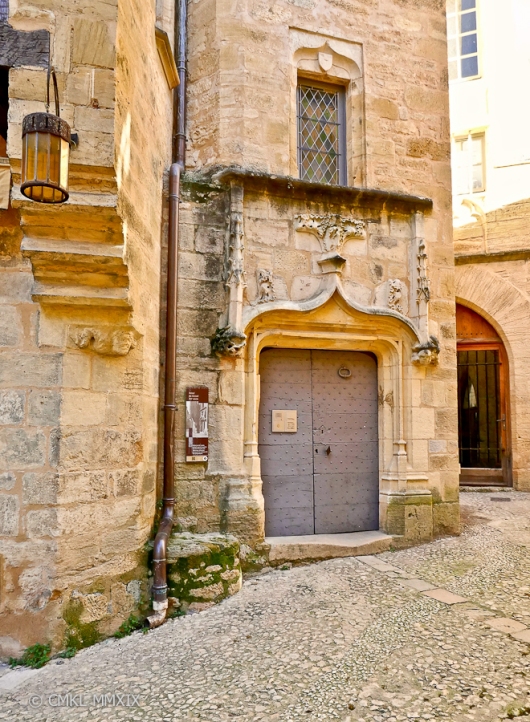 The Hôtel de Grézel, a substantial Hôtel Particulier or mansion, originally built in the 13th century, received the addition of a staircase tower in the 15th century with this grand entrance in Flamboyant Gothic style, complete with ogee, no less. Nothing furthers one’s standing in the community than a flamboyant ogee, trust me! The Hôtel de Grézel is located in Salamander street, where we find an interesting decoration on an archway leading toward Place de la Liberté.

Namely the totem animal of King François I, his salamander, complete with Fleurs de Lys and crown – or so one might think. Since François was a local boy, born across the Charente river from us in the Cognac castle of the Counts of Angoulême, we’re quite familiar with his family history. François was no more in line for a crown than HM Elisabeth II was, but fate intervened for both rulers. For the British queen in the shape of an American divorée, in François’ case, he was chosen to fill the shoes of his childless cousin and predecessor King Louis XII. As François I of the House of Valois-Angoulême, he adopted the salamander of the Counts of Angoulême as his totem, adding the Latin motto NUTRISCO ET EXTINGO. This salamander was not your run-of-the-mill amphibian, of course, it was a mystical animal with supernatural powers. It looked like a four-legged lizardy dragon possessing a long neck and tail. The salamander was surrounded by fires which it controlled, hence the motto: nutrisco = I maintain it (the fire) and extingo = I extinguish it. The salamander’s power over fire translated to the king’s power over the destiny of his people. Nowadays it is well documented that amphibians can secrete noxious and toxic substances through their skin and specialized glands, but rumors of their resistance against fire have been persistent since antiquity. According to Pliny, the Elder [23 – 79] salamanders won’t be harmed by fires because they exude a protective foam. Such a lengthy explanation of royal salamanders and we still don’t know what the beast is doing in Sarlat-de-Canéda. Even more puzzling is the date listed below the crest.

I’ve searched around online, but haven’t been able to find any useful information. The town emblem used to be a simple “S” until it shifted to, you guessed it, a Salamander sometime after the plague epidemic of 1562. Might that be related? I don’t know.

By then, we needed a break and settled down at a café opposite the town hall in Place de la Liberté,

before continuing our perambulations through Sarlat. 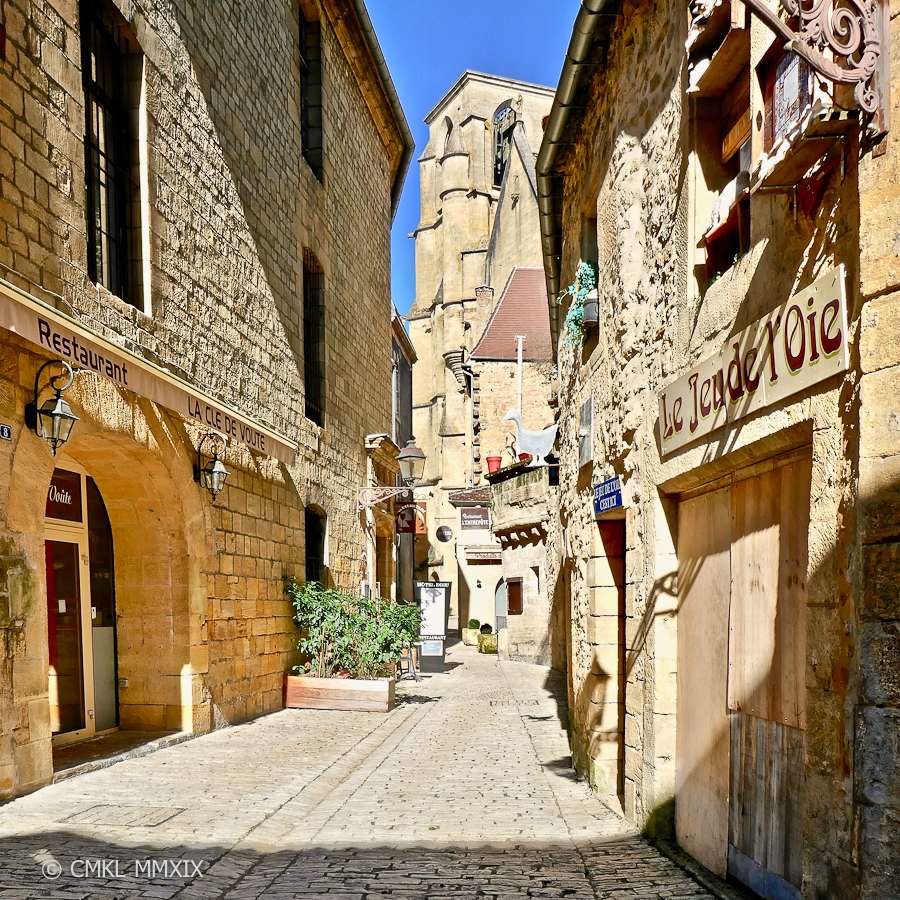 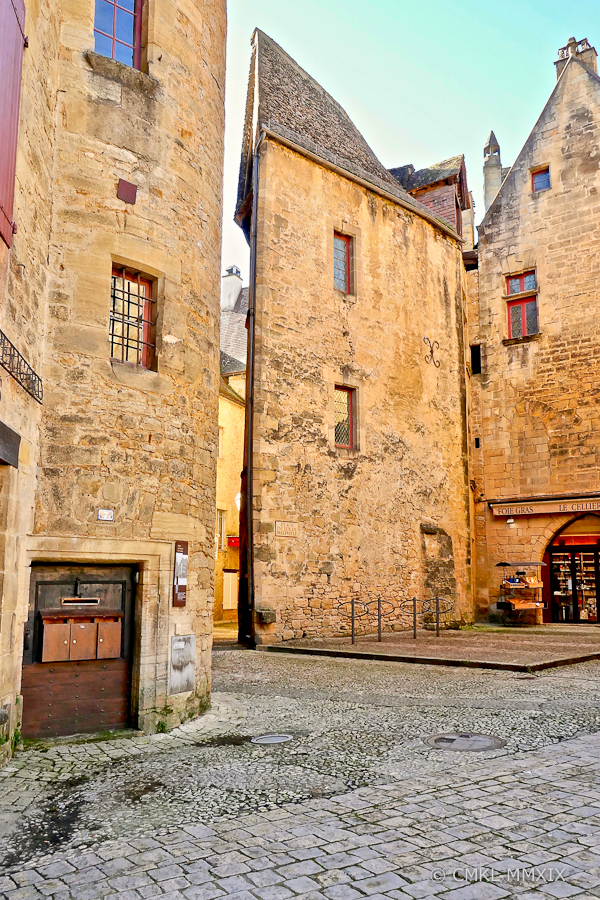 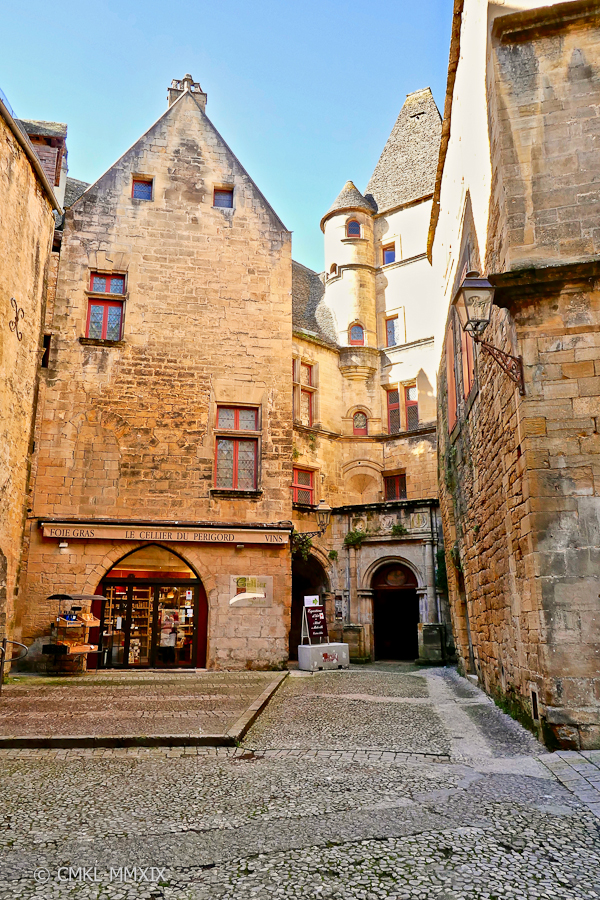 This is another impressive and charmingly convoluted ancient hôtel particulier called the Hôtel de Vienne, sometimes referenced as Hôtel Maleville. It’s Renaissance splendor was created by combining three houses into one. The original owner, Jean de Vienne had quite an extraordinary life. He was born into a poor family in Sarlat in 1557, ultimately working as superintendent of finances for Henri IV. An unheard-of social rise in those days. 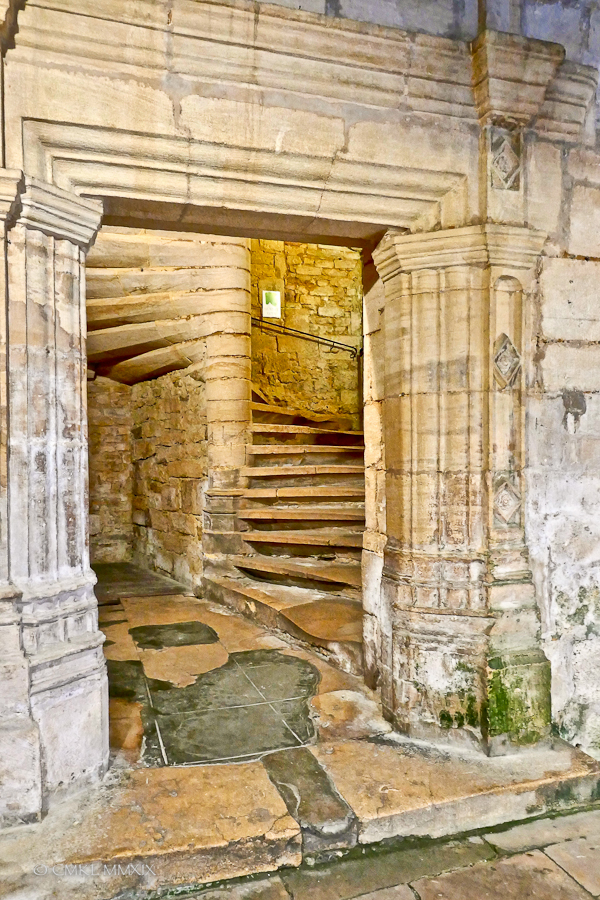 After admiring the Hôtel de Vienne, we slowly made our way back to the car, passing just a few more remarkable sights.