Skip to content
Posted on October 7, 2011August 22, 2018 by CMKL
We live in a development, which straddles a steep hillside between two gorges, which form an upside down V pointing South. Más o menos. Have you ever noticed, how difficult it is to describe a geographical layout?
When I read descriptions of such features in a book, my inner picture rarely matches neither reality, if it is an actual location, nor the imagination of others. Especially film-makers never seem to see anything the same way I imagine them to be. Not for landscapes, nor characters. Ever since seeing ‘Dr. Zhivago’ with Omar Sharif and his pathetically moist brown eyes, constantly on the verge of overflowing, I swore never to watch a movie again, if I’d read the book. In the forty plus years since, I have made an exception for Colin Dexter’s ‘Inspector Morse’, played brilliantly by John Thaw, and, of course, Dame James’ Inspector Adam Dalgliesh, portrait by the intriguing Roy Marsden. Unfortunately, I also let the horrible movie version of ‘Dune’ slip in there. Big mistake.
But back to our neighborhood. Our road more or less bisects this promontory, with properties lining up to the right (West) and left (East) as you drive, ever so carefully in first gear, downhill. Our house faces South, overlooking a portion of the Valle Central, where the new main road, la Autopista del Sol, runs from the Capital of San José, past our little town of Atenas, to the Pacific Ocean. On a good day, we can scent the aroma of sea salt and damp sand. Okay, maybe not, but we might, conceivably.
The house sits on a fairly small, flat plantel, or building site, while the majority of land slopes down sharply into the western gorge. Thus we have a neighbor directly below us and directly above us. Theoretically at least, since those plots, cut into the mountainside like a staircase for giants, with us on the middle step, haven’t been build upon yet. We, on the other hand, are interested in adding another small dwelling on our property, as well as a few other improvements.
Since we’re all fairly tightly packed together, it seemed important to us, to stake out our exact property lines, before starting to invest in any construction projects. To that end, we engaged the services of a surveyor, who arrived with his machete and his helper on Tuesday morning. A few hours later, I wished, we hadn’t been so conscientious. 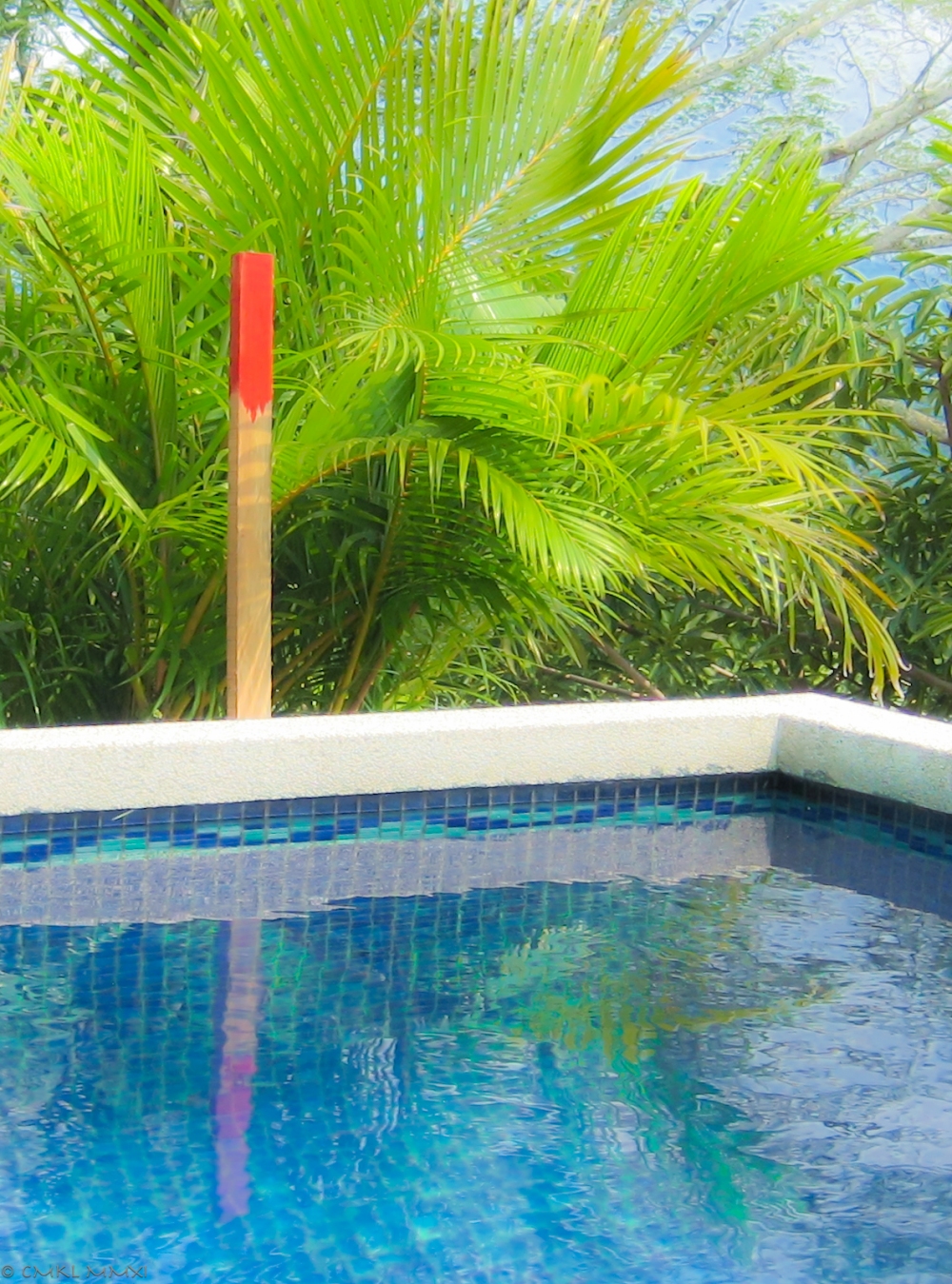 You noticed, eh? Yes, the southeast corner of our lap pool allegedly belongs to our neighbors now.
As you can imagine, I’m as dumbfounded as I’m gobsmacked. How exact a science is surveying? Most of all, I would imagine, it depends on your starting point. The first corner, so to speak, on which all other reference points are based. These new measurements differ so significantly from a previous survey that we’re not at all sure anymore, where Casa dos Leones is, precisely. Might be on Arrakis.

One thought on “Surveyor with Machete”