One evening last year in late July, I noticed a very exotic looking moth clinging to the outside of the screen door to our living room. Even in the dim light, it looked striking, in contrasting black and white. I called it ‘Harlequin Moth’.

By the next morning, it had disappeared and I never saw another one like it. Earlier this year, after we returned to Costa Rica, I checked around online a little and found out that a spectacular moth, similar to my harlequin, can be found in several websites. It’s a Hypercompe scribonia (Stoll, 1790) a Giant Leopard Moth. So my harlequin turned into a giant leopard, why not. 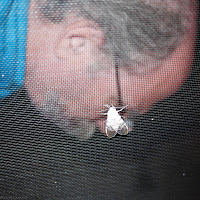 Except … my little harlequin wasn’t a giant (as you can clearly see, it’s tiny compared to El Bigote Grande), the black and iridescent blue leopard spots were empty circles, the hind wings were partially translucent, the required blue body markings were mostly orange …. I really should’ve known better, I should’ve smelt a giant cat. A biologist shouldn’t jump to conclusions quite this readily and solely based on a few fuzzy pictures. Especially, if her living environment holds, oh, let’s say, eight thousand species, from which to choose.
Species identifications are rarely as simple or as clear-cut as you might think. Biologists who work specifically with neotropics within the order Lepidoptera will, of course, be able to identify at a glance, wherein the cladogram my harlequin should reside. For outsiders, it’s practically impossible. Not only owing to the huge number of species but also, because there are innumerable variations within any given species. Geography, gender, age, polymorphism or lifecycle stage are all factors influencing a critter’s appearance and that doesn’t even take spontaneous mutations into account – and I am not kidding here!
I sometimes spend hours googling my way through the animal kingdom, which may result in a tentative identification, occasionally supported through fragmentary information that I still remember from my “Bestimmungsübungen” (classes in taxonomy), but usually, I’m clueless. Right now I’m completely in the dark about a caterpillar I found yesterday, moving along at a good clip right by the pool. All I’m certain of is the danger of its urticating bristles for our dog’s noses. These cute ‘hairs’ can sting fiercely, some are even dangerous for humans since they can release hemolytic venom when broken off. 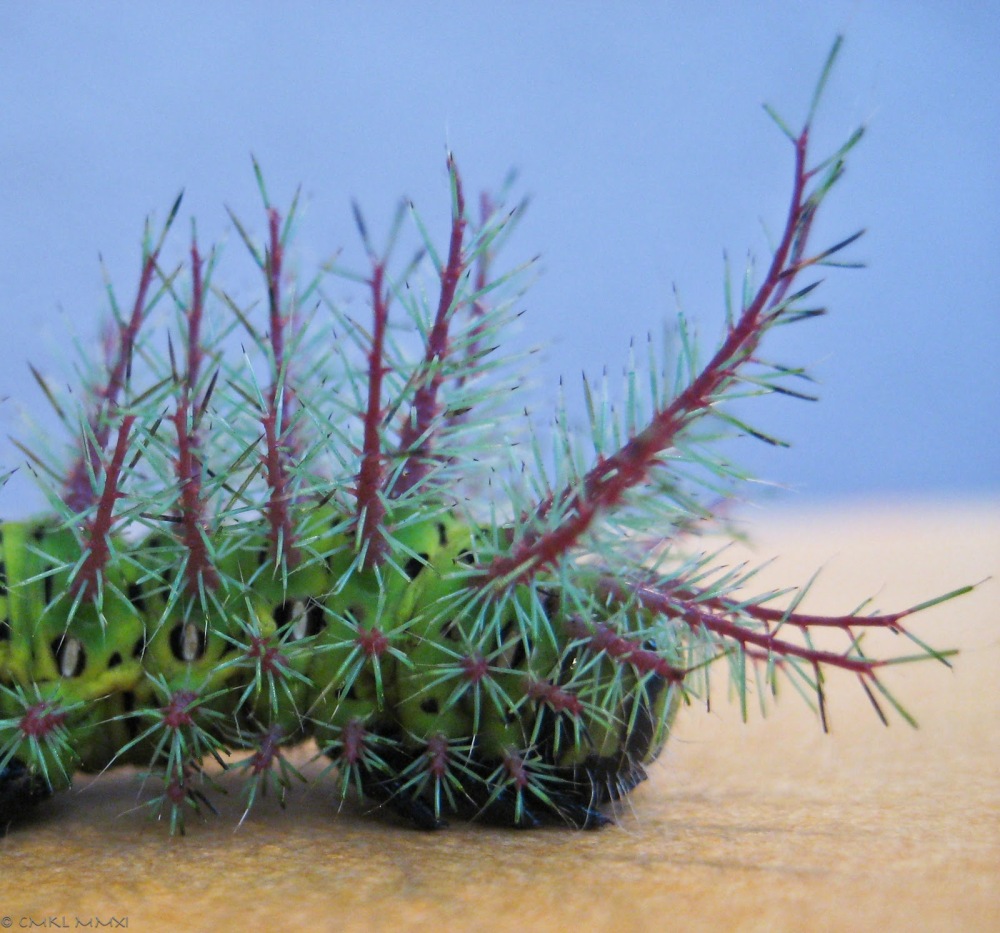 After looking through countless images of hairy caterpillars, I narrowed it down to Saturniidae. Possibly, this pink and neon green creature could be a member of the Hemileucinae subfamily, which I know quite well from Texas, but I’m wildly guessing here.
Not too long ago, I sent a picture of another caterpillar, which completely stomped me, to an eminent member of the scientific community. Dr. Daniel Janzen has worked tirelessly for conservation and the preservation of biodiversity for decades. He is the founding father and driving force behind the ACG, ‘Area de Conservación Guanacaste’, a CR National Park and research station extraordinaire. He and his wife, Dr. Winnie Hallwachs, are also faculty members at the University of Pennsylvania and work and teach all over the globe. I emailed him a picture of my crazy pink caterpillar, and low and behold, I got an answer within hours. Can you believe it? Naturally, my own guess had not even been in the ballpark – fortunately, I got the caterpillar part right! And this busy, gracious professional was even polite about my fumbling attempt at taxonomy. I bet, Dan and Winnie chuckled about my amateur hour later! It was very satisfying to read that he appreciated the photo and included it in his collection, because he had seen this stage in the field, but had no picture of it. I couldn’t help myself and sent him a picture of yesterday’s bristly neon creature, too. I Haven’t heard back yet, but I hope, he’ll continue to be patient with me. It’s not my fault that we have all these strange beasts around here, is it now? The first one, the pink sausage below (Pararcte schneideriana), was especially unusual, because, as I learned from Dr. Janzen, it only turns pink for a brief, pre-pupal stage, during which it moves on the ground in search of a suitable pupation home. Prior to these last few hours as a pink caterpillar, it lives in Guarumo trees (Cecropia obtusifolia) as a perfectly normal, green, leaf-munching larva.

Between the bristly fellows and the pink sausage caterpillar, we’ve lost track of the alleged giant leopard moth, formerly addressed as Harlequin. As it happened, just this morning, I found another one. The poor thing was hopping around the ground quite strangely. They’re supposed to be nocturnal, so this was doubly troubling. I offered my index finger, the left this time, and the little harlequin climbed right up. 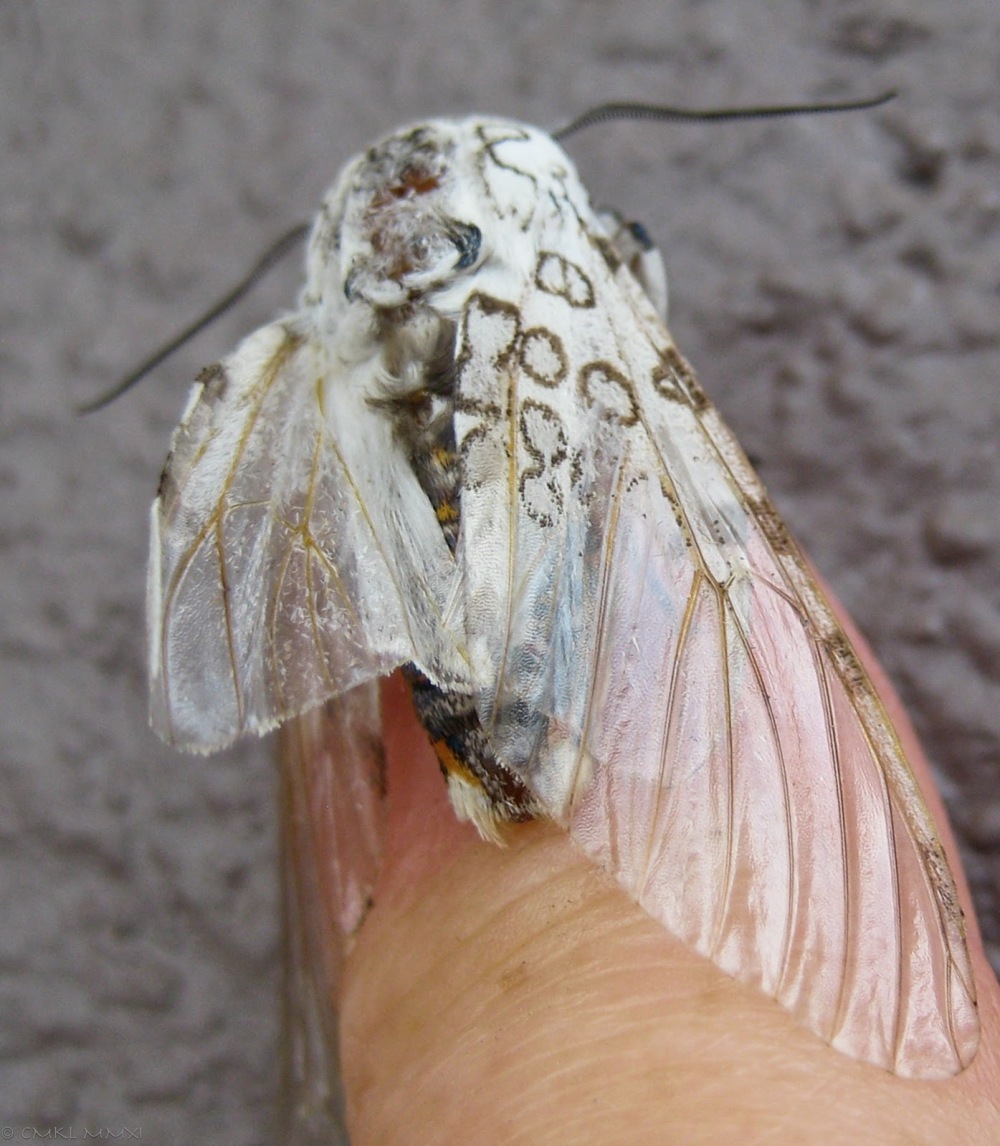 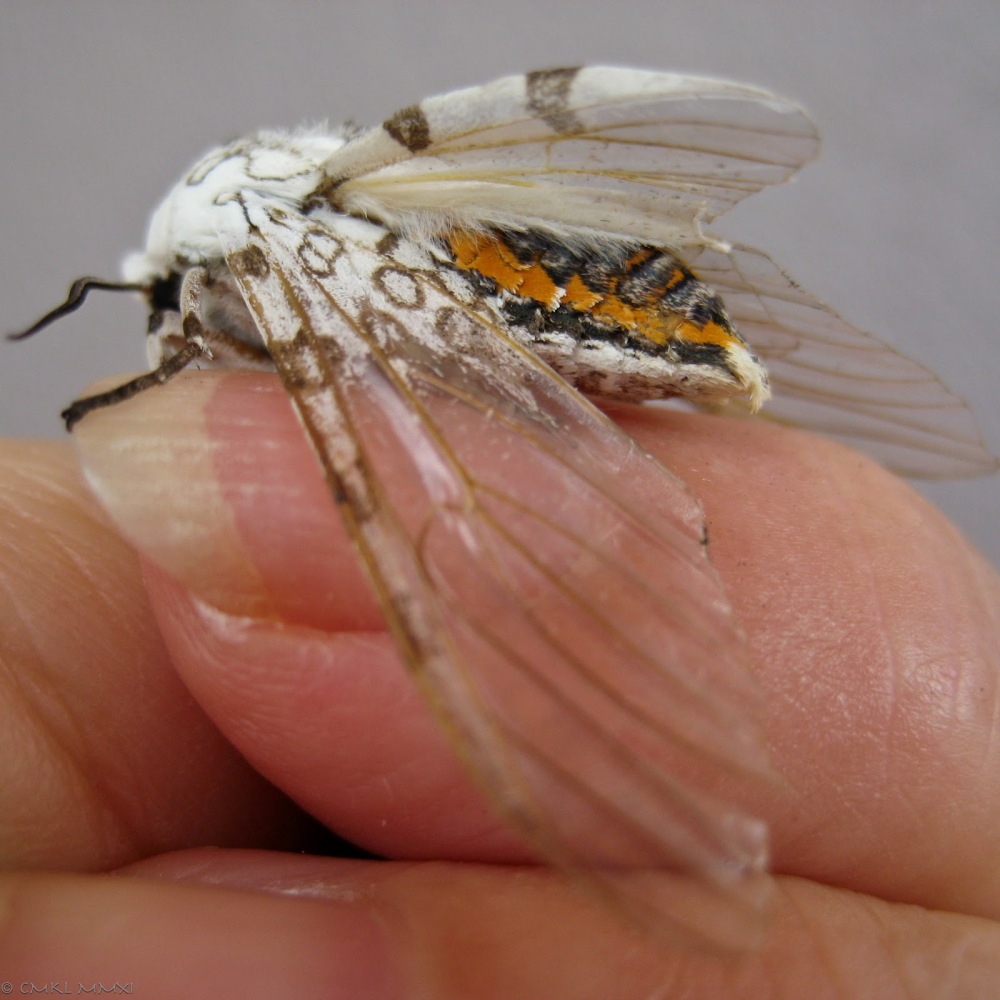 It was immediately clear that he had sustained major damage. The left forewing was sticking up in an odd angle. In mammals, you’d call that a dislocated shoulder. I tried to gently manipulate the wing arrangement, but it wouldn’t stay in place. Sadly, I couldn’t help the little fellow, so I sat him down in a nice bush and hoped for the best. I checked a little while later, but he had disappeared.

PPS: Instead of Hypercompe scribonia (Stoll, 1790) I’m now guessing
Hypercompe caudata (Walker, 1855), a much better fit, but then, what do I know? Just call it Ocelot.
PPPS: Dan Janzen to the rescue (of all Lepidoptera-challenged cellular biologists)! He emailed me harlequin’s real name: Hypercompe icasia (Cramer, 1777), Arctiidae. Thank you!!

2 thoughts on “Of Harlequins and Giant Leopards”