Skip to content
Posted on January 5, 2012August 26, 2018 by CMKL
We’ve been exceedingly busy lately.
In an attempt to achieve a lasting balance between all three of my favorite home countries, we’re going to fly back to Austin in a couple of weeks, to allow me to apply for the privilege of a United States Citizenship. While we’re away, we want to rent our home in Costa Rica to those members of the general public, who would love nothing better than to lounge in a cushy chair, trailing their fingers through the cool waves of our lap pool, while sipping a maracuyá refresco, lazily following drifting clouds over the next mountain ridge toward the Pacific ocean’s wave action surfer’s paradise, zip-lining in the cloud forest, listening to the clanking croak of toucans, with green and black iguanas casting shadows in the sand.
Close your eyes and dream, while gentle breezes ruffle your hair – it’s as splendid as that!
http://www.vrbo.com/394413

In order to offer those kinds of tourist pleasures, we had to work hard to get organized. Last night’s composition of the washing machine instruction manual in English and Spanish alone took me till almost one o’clock in the morning. And, in the midst of all this upheaval, I’m trying to raise a misguided butterfly in a stuffed olive jar…
I encountered the animal in question a few days ago in the form of a caterpillar near our front door.

Less than 24 hours later the same caterpillar, presumably, had marched straight up the front of our house and had begun to spin like crazy in the vain attempt to fold over our solid wood front door to create a shelter for its metamorphosis into a skipper butterfly. We can now either call it an aberration, a pest to be removed, a smudge on the polished surface of my elegant door, or, we may self-consciously reflect on the ever-expanding human encroachment on nature’s beauty and ponder our guilt.

Being of a rather practical disposition, I petitioned Dr. Dan Janzen of the renowned Área de Conservation Guanacaste once again. Since, for some unfathomable reasons, this kind and patient professor tolerates my many questions, I received instructions forthwith.
I was to snip the silken threads and gently deposit the misguided future skipper in a layer of toilet paper in a cup. Our kitchen is woefully short of specimen cups at present, but we did have this nice and roomy stuffed olive jar, which just begged to be turned into a pupation shelter.

Thankfully, we’re not short on bathroom tissue, so the new cocoon option was soon ready. Time to drag the six-foot household ladder over to the front door, climb those dizzying heights armed with sharp scissors and the tissue-stuffed olive jar. Which reminded me of a t-shirt offer, I had seen in a mail-order catalog some years ago: ‘runs with scissors’. I always liked that caption, even though I never managed to order the shirt.

On my lofty perch, I cut the binding threads and used an index card to loosen the caterpillar’s grip on the wooden surface. The card also supported the wiggly beast’s weight, so that I didn’t have to actually grab it. Instead, I could gently steady it against the card while maneuvering the animal into the tissue-lined jar. The caterpillar seemed quite agitated and I don’t know if this transfer was beneficial or destructive. 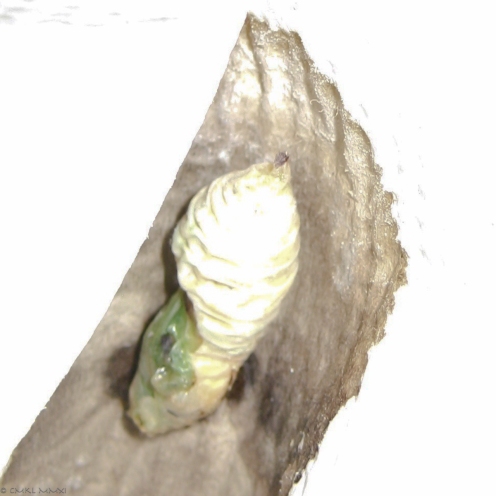 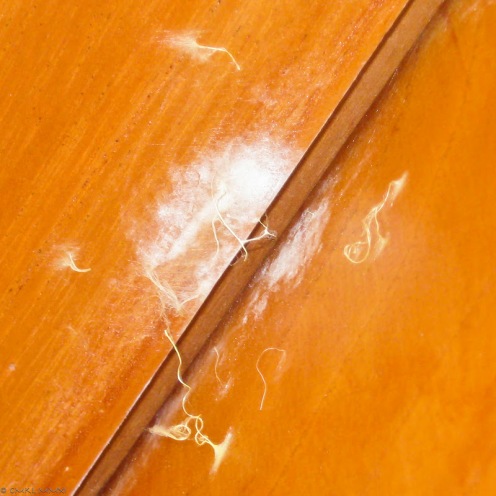 Within the first couple of days there was a lot of fluid loss and, being as uneducated about the lepidopteral life cycle as the next guy, I really don’t know, if we lost the skipper-to-be or if that’s a normal function of pupation. The pupa looks unfinished to me, but we’ll see soon if the development continues.
Meanwhile, I noticed another misguided caterpillar trying to pupate on our concrete gate post. This one really stuck out in the open, completely unprotected, chalky white against the mushroom colored stucco. Not even a fleeting chance to survive that unfortunate location. Within a few hours, only these silken threads remained. Mother Nature practicing ‘tough love’.