Anyone not partial to green, kindly read some other blog today – it’s Green Day at El Rancho Leon! Not the shamrocky soft shoe kind of green, but a prickly, thorny, unkempt, wild kind of green.

When I climbed down the ridge, the glare and glitz of this old, skinny legged mesquite dancer in her shimmery tutu were so strong, I almost tripped over my clumsy feet, when I first saw her.

Just don’t get too close! That frilly tulle skirt hides two-inch razor-sharp thorns. Mizquitl, as the Aztecs called this barbed legume, had many uses in the Mesoamerican native kitchen, but isn’t utilized so much anymore. Adding mesquite flour to your bread dough, though, gives it a deep nutty flavor for a little edge. Prickly pear paddles or nopales are still as popular as they were, when the people of Tenochtitlan served them to Hernán Cortés de Monroy y Pizarro, wrapped in a mizquitl flour tortilla, naturally.

The deeper I walked into my mesquite ‘forest’, the greener the atmosphere became. The green and yellow gleam infused the very air, turning the scene into a fairyland. A multitude of butterflies was also enjoying this enchanted locale, flittering and flattering all around me. I tried so hard to take a picture, but their hectic movements defeated me time and again. The one I did catch was snapped through a zoom lens, all I could see was a brownish speck on some lilac verbena. Tough …..!

Mesquite is not the only thorny life form here. Another dangerous plant is the barrel cactus, also called horse crippler. They’re typically about a foot or so in diameter (30cm) and huddle low in the ground, where they’re practically invisible in our rough environment. Their stiff, awl-shaped, ribbed spines are horrible weapons, as you can imagine. Especially, if driven forcefully into the soft underside of equine toesies. In contrast to their gruff and sturdy overall appearance, barrel cacti develop the most delicate, translucent pink flowers.

But it’s not always the longest or sharpest spines that cause the most grief. Some cacti, like the prickly pear, also have a nearly invisible defense system called glochids. Fine, hair-like, but very short, these ‘prickles’ clustered in the areoles, the points on the cacti main stem where the larger spines emerge. They also hide in other areas, like the fruit, as well. It is quite easy to avoid the large spines but the glochids are an entirely different matter. They can transfer to your skin even before one actually touches the plant.

Many years ago, my sister brought back cactus fruit from North Africa.  According to tradition, her cactus pears were kept in a paper bag filled with sand. The sand rubs off the glochids so that one can touch the fruit safely. Or not. At least one of the translucent little prickles found it’s way under the nail bed of my left middle finger. It caused an inflammation, which turned my finger into a social liability since I couldn’t bend it anymore, and I also had to elevate the hand to make the throbbing bearable. Eventually, the finger started to turn black and the swelling split the skin in places, so it became necessary to surgically open the nail bed, root around for the invisible enemy, flash the area vigorously and hope for the best. Insidious little bastards, they are! Glochids or not, I was wearing gloves, when I was rooting around a claret cup cactus to take a picture of this juvenile katydid hiding deep inside. 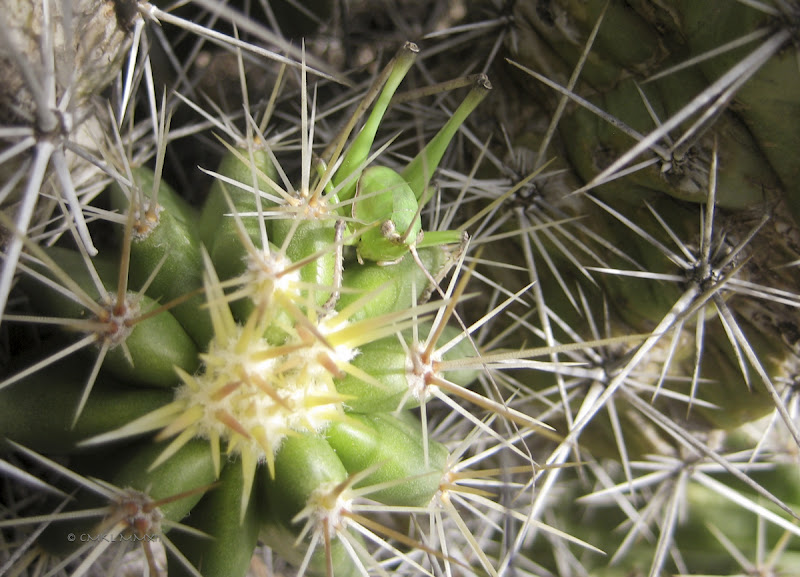 Walking back home, I came across another small thing. It shone in solitary splendor among the rocks of a small dry wash. It’s yellow petals forming a beacon of brightness among the greys of the stones and the dull brown tones of last years dead oak leaves, which the wind had deposited in grooves and crevasses. ‘Perseverance!’ popped into my mind. After all the chlorophyll fueled greenness I had experienced only moments ago, this chipper little daisy made me grin from ear to ear. I hope, it will enliven your day also, giving you a tiny boost away from your everyday troubles. 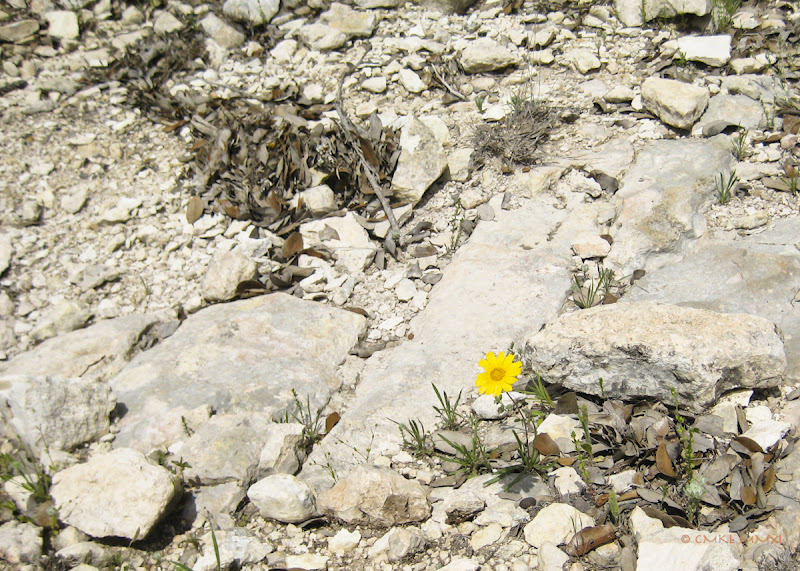