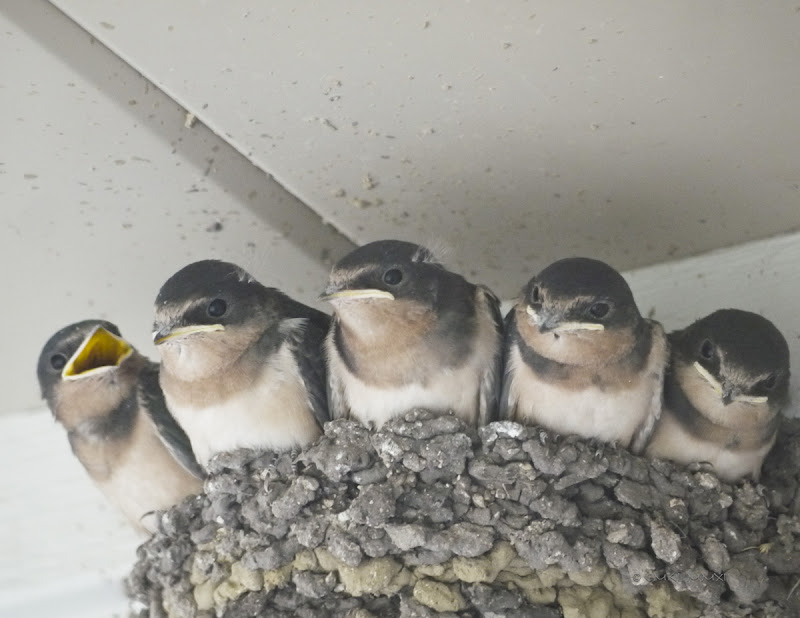 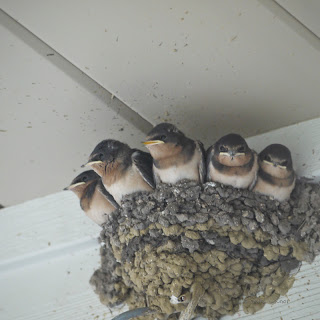 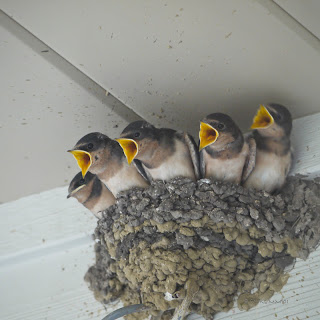 Don’t you just love our spiffy youngsters? There’re still some stray down feathers sticking up, here and there, but overall we’re looking at a nice line-up of roughly 16 to 18 day old, well-fed swallow hatch-to-fledge-lings.
And because they’re going to fly off into the sunset soon, I will once more show you a series of “feeding” shots. I hope, you won’t be too bored, but I enjoy these high-speed parental actions sequences very much! 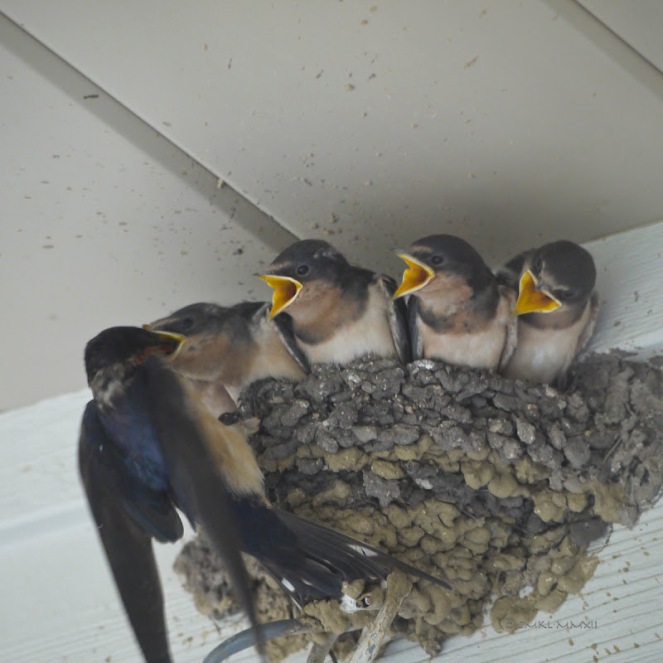 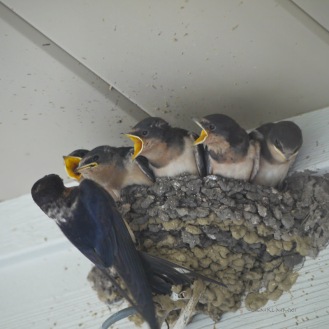 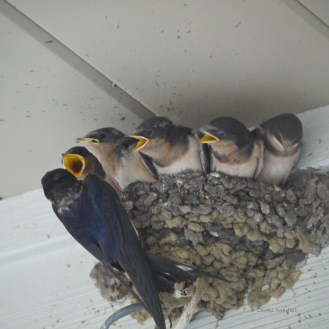 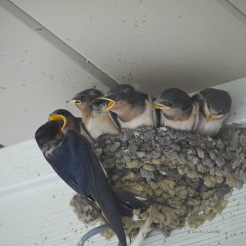 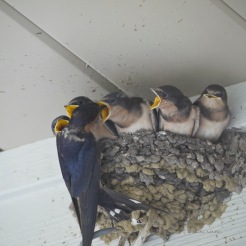 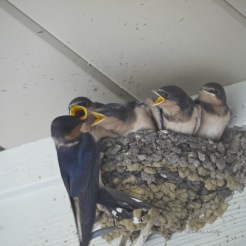 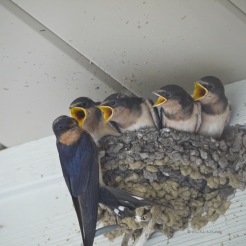 Sadly, there is another reason for indulging in yet another feeding sequence. The father of this clutch of barn swallows died overnight, which makes these the last pictures taken of Papa Swallow.

Just before nightfall yesterday, I saw him sitting in the nest with his hatchlings, somewhat in the back, alongside the house wall. I noticed because I had never seen a parent bird share the nest since the hatchlings grew so large that they were practically spilling over.
In the morning, his long, spiky tail feathers, the hallmark of any proud male swallow, stuck out over the mud nest’s rim like empty twin flag poles. No movement, no changes for several hours. 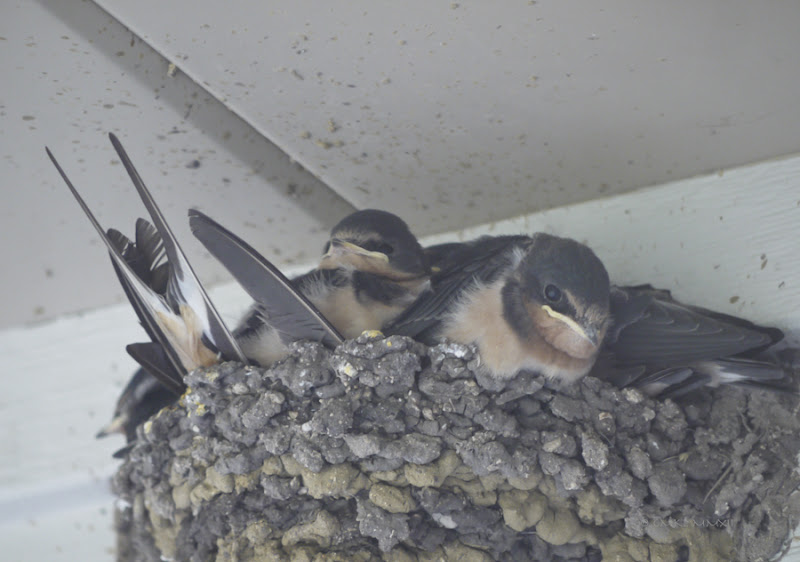 I also observed that mom had trouble feeding the hatchlings. She would approach the nest as usual, but despite the babies’ demand for food with wide open gullets, she landed only once in a dozen attempts. Again and again, she’d do a fly-by without landing, so the young birds remained unfed. It did worry me to watch this unhealthy development. 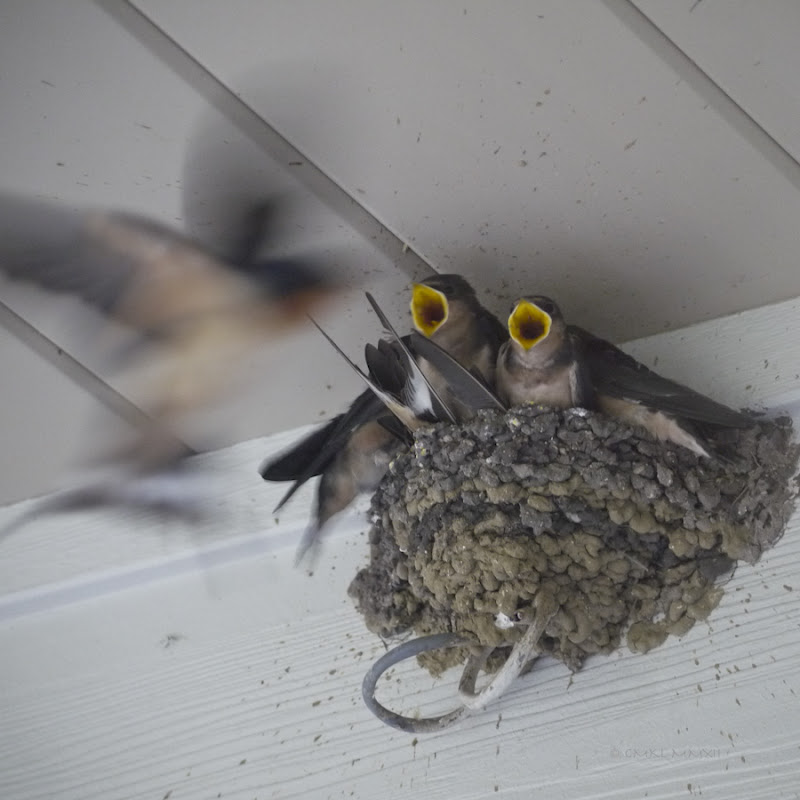 Finally, I decided to interfere. I positioned a ladder and, trying to disguise my human-ness, I donned a smock, a cap, a face mask, and latex gloves, before slowly climbing up the ladder. Although I reached up toward the nest in super-slow-mo, the hatchlings interpreted this as an imminent threat to life and limb and embarked on their first, premature flight. All five of them took off in a burst of frantic feather flapping, while I lifted their dead papá from the nest and committed the fragile, tiny body with it’s beautiful iridescent blue and deep rust colored feathers to nature in the nearby woods. He had been a very hard working dad.

Afterward, I was anxiously searching the sky for our five fletchling swallows. Every now and then one or more could be seen circling in wide arcs in the vicinity of the house. But it took about an hour before I spotted the young birds and their mother sitting on the top wire and posts of our kennel fence. As I watched, they presented a rather hectic and confused scene with short bursts of activity interspersed with breathless moments of wobbly rest, feathers ruffled and disorderly. I never counted more than four fletchings at any given time, which might mean that one of them had not been ready for this human-induced flight session yet. After several hours of fence-sitting, it also became apparent that there were no attempts to return to the nest. 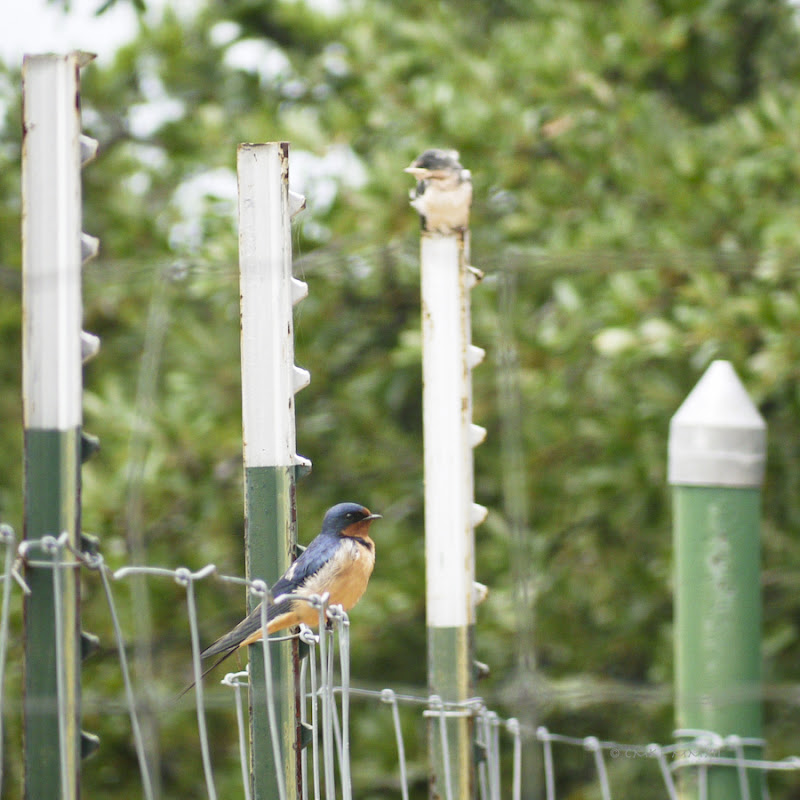 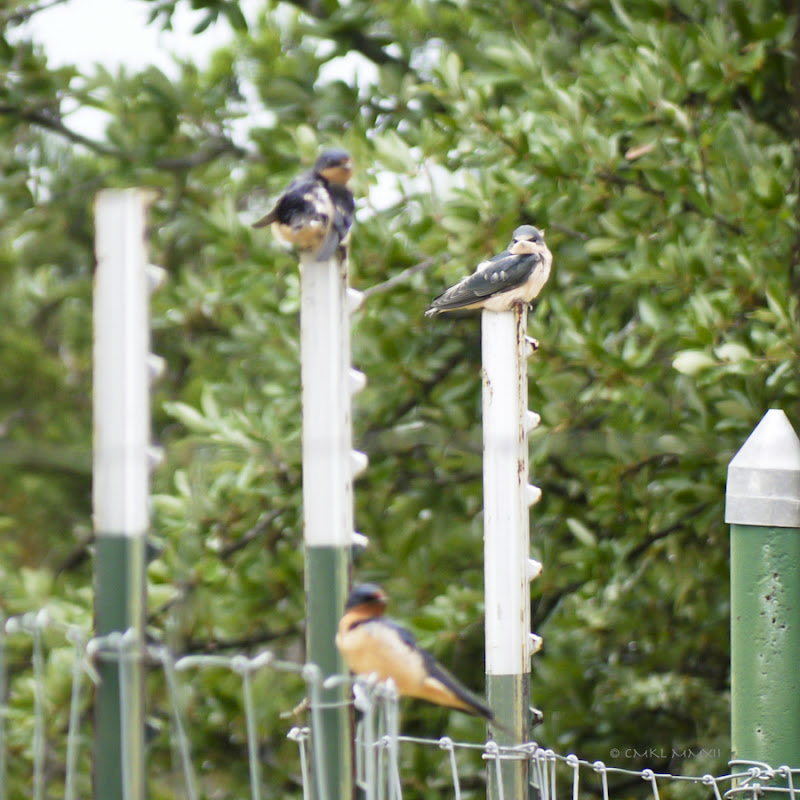 Maybe I should ‘Fabreze’ it?

At this point in my observations, we had to leave for an overnighter to Austin for Barry’s return flight to Costa Rica.

It’s now 24 hours later, give or take, and as I write this, I’m sitting in the customer computer lounge of ‘Beasley Volvo’, while my son’s car is being serviced and rotated and oil changed.

Meanwhile, Barry is sitting in some airport lounge in Houston, waiting for his connecting flight to CR.

We’ll find out, once I return to the ranch later today.

Now, after my three-hour-ten-minute drive back to the ranch, we’re looking at the following situation: 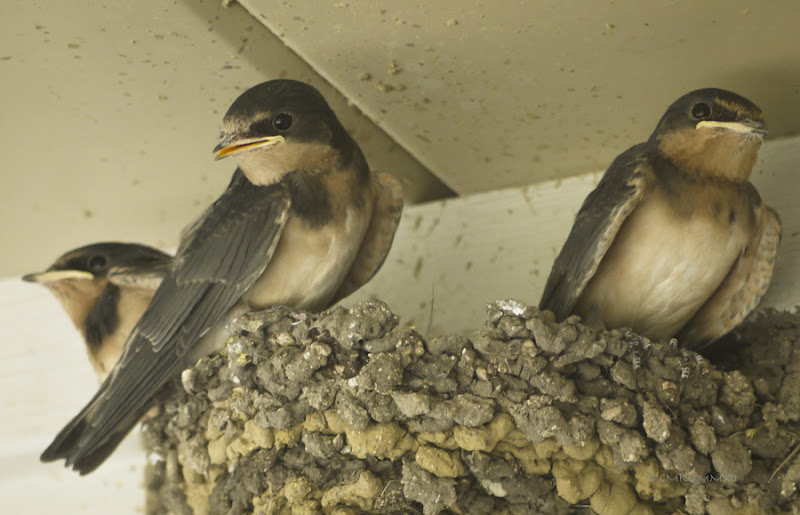 Three fletchling swallows have definitely survived yesterday’s traumatic events and have returned to their nest. They look quite healthy and chipper. Best of all, mom has decided to continue feeding… 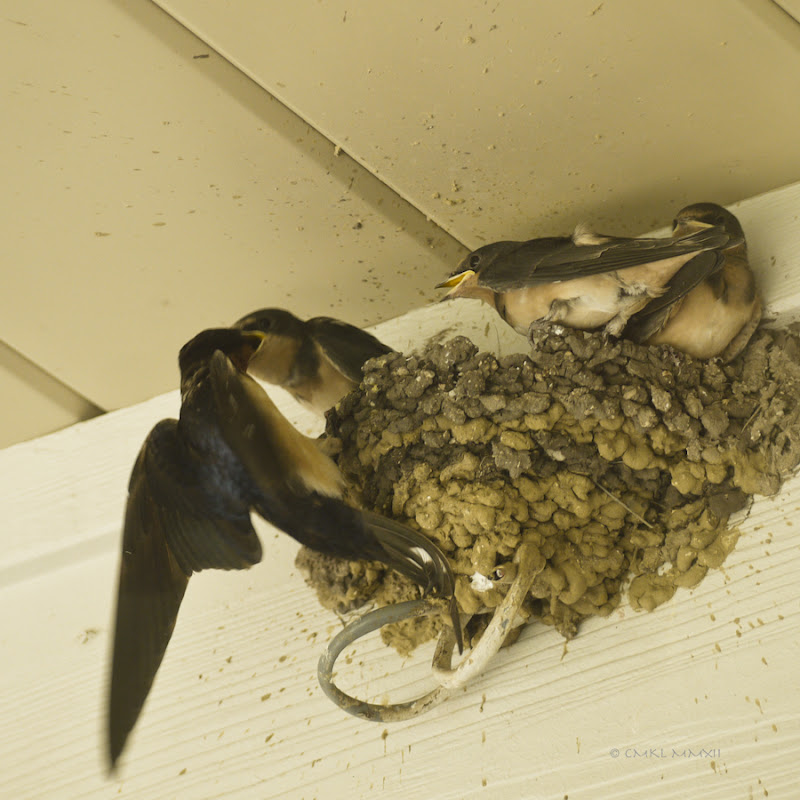 … here’s the next generation of barn swallows in Mountain Home. 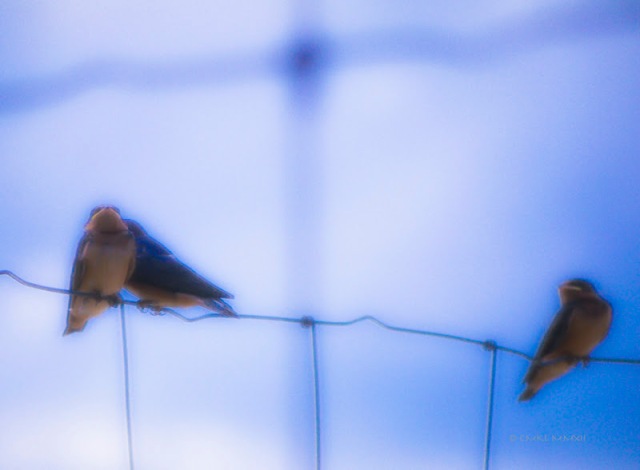