On July 15, 2011, we lost a craftsman, a cowboy, an American icon
Donald Dean Atkinson
A child growing up fast in Missouri during the Dirty Thirties, the Dust Bowl, the Great Depression. Living in the broken heart of a ravaged rural Midwest, Don learned the traditions of down to earth hard work and dedication early and these values stayed with him throughout his life. But he also had an adventurous streak, a twinkle in his eye, which got him hooked on rodeoing. His outgoing personality made him friends all over the globe.


Don Atkinson was fated to become a saddle and boot maker through his gift for leather work, which was nurtured after a chance encounter in the mid-thirties, by another future legend, saddle maker Monroe Veach. Don also became a rodeo cowboy, enjoying the life and companionship on the circuit and, also, it’s glitz and glamour. Oh, the stories he could tell!! And he died, not only famous and renown for his craft, but also as a beloved, genuine Good Ol’ Boy.


We were abroad last year, when he left us. I only found out about his passing now, when I drove up to his workshop and saw the blank facade. Stark and grey. The lonely lamp illuminating only empty space, where the familiar, bright red “Don Atkinson, Custom Saddle and Boot Shop” sign used to advertise his work. 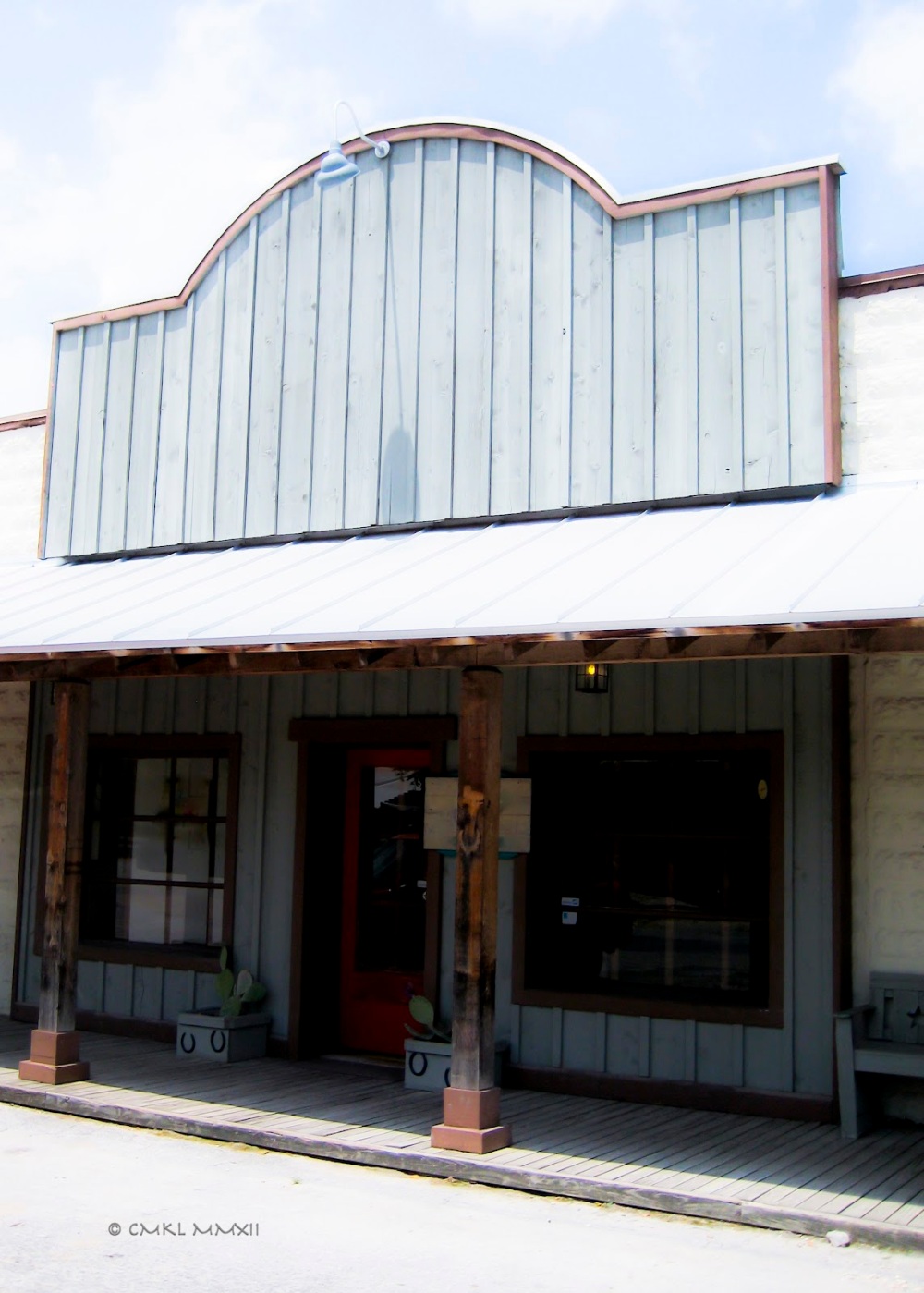 The sales room of his saddle and boot making shop was overflowing with mementos of a long life as a craftsman and as a competitor on the rodeo circuit. It was a beautiful space with an uneven, red tiled floor, cowhides scattered here and there, a rustic bench offering comfort. It was filled with samples of his work and with photos of his achievements. He had display cases with tooled leather belts, wallets, stir-up straps and everything else imaginable, crafted in leather. There was a toy-sized saddle, he built as a child, full-sized saddles on saw horses and photos plastered the walls, photos everywhere! There were images of country singers, Hall-of-Famers, local cowboys, actors and community celebrities. Among them, you could see pictures of Don, as well as his wife Virginia, who not only did the stitching for his boots but had acquitted herself quite well as a horsewoman on the rodeo circuit as well. It was a special place, permeated with the smell of hides, saddle soap and wet dog – courtesy of Don’s beloved wiener dog.
I tracked down his obituary in a local paper. Cost me 99 cents for a 24h e-membership to get access. Small town rules, I guess, but I was glad to pay. Following is an excerpt from the original article.
KERRVILLE – Donald Dean Atkinson, 82, of Ingram, Texas, passed away Friday, July 15, 2011.
Don was born in Hickory, Mo., on March 6, 1929, to Isaac and Elva Atkinson. His education was the school of hard knocks. He never graduated high school but was a very astute businessman.
His father died when Don was a young boy and when he was 9 years old, he met Monroe Veach, a renowned boot and saddle maker. Monroe gave Don his first piece of leather to make a holster for a Hopalong Cassidy cap pistol and instructed the boy to bring it back so he could see it. When Don returned, Monroe saw a talent in the raw. So went the beginning of a successful career of saddle making that would make the boy a legend in his own right.
Don was drafted into the Army when he was 19 years old and served his country honorably for 2 1/2 years, seeing combat in Korea. After his military service, Don returned to Trenton, Mo., where Monroe built him a shop right next door to his, and mentor and apprentice worked alongside one another. His relationship with Monroe continued until Monroe’s death in 1984.
Don professionally rodeoed for years, was a member of the Rodeo Cowboys Association and, although he competed in all events, his favorites were bulls, broncs and calf roping. His last rodeo horse, Baldy, was 32 years old and Don was 42 when they retired from rodeoing.
Over the years, he garnered a legendary reputation in the fields of boot making and saddle making.
There was nothing he couldn’t do with leather that didn’t turn out beautifully. He made boots for Slim Pickens, Hank Williams and Gene Autry. Don took such pride in his craftsmanship, he truly was a master.
Don married Virginia Luther on Feb. 11, 1983. In 1985, they moved to Kerrville, Texas. Don felt like he had always lived in Texas, and the Hill Country was his home. He continued his leather trade and, for the past 15 years, had a shop in Ingram, Texas: Don Atkinson Custom Boot and Saddle Shop.
He and his wife started a boot and saddle making school at his shop 12 years ago. It was very successful. People have come to Don’s school from as far away as Japan.
Don amassed more friends than imaginable, a wealth of friends. His pleasures were breakfast with the boys at the Running W (Whataburger) in Ingram every morning and “coffee”-ing with the boys in the afternoon at his shop. It was a long-held tradition that he loved.
He loved animals. Some of those who knew him claimed that after they died, they wanted to come back as one of Don’s animals because his pets were so well taken care of. Before Don had supper at night, his animals were always fed and cared for.
Don has had numerous magazine and newspaper articles written about him, given television interviews and has received accolades from around the world.
On Sunday, June 12, 2011, the new rodeo arena at Thousand Hills Cowboy Church in Kerrville, Texas, was named in his honor, Don Atkinson Arena.
I’m very happy that Don witnessed the rodeo arena dedication at the Thousand Hills Cowboy Church, just. His Memorial Service, to which everyone was asked to come in jeans and boots, was held there, too. There’re a few things in this obituary, which don’t quite match Don’s own words – as I remember them. He told us that he opened his first shop in Oklahoma, when he was barely seventeen. Barry remembers his own version of events involving Nebraska and I read something about Kansas, somewhere … That’s what happens to legends! Their true and factual daily lives, often as boring as our own, become forever-more shrouded in the mist of time and imagination. If you’re interested in one of these legends of the West, Don’s mentor, saddle maker Veach, check out this link “Roy Murphy: Monroe Veach”. It’s a little lengthy, but well worth the effort. Monroe Veach died in 1986, by the way, rather than in 84. 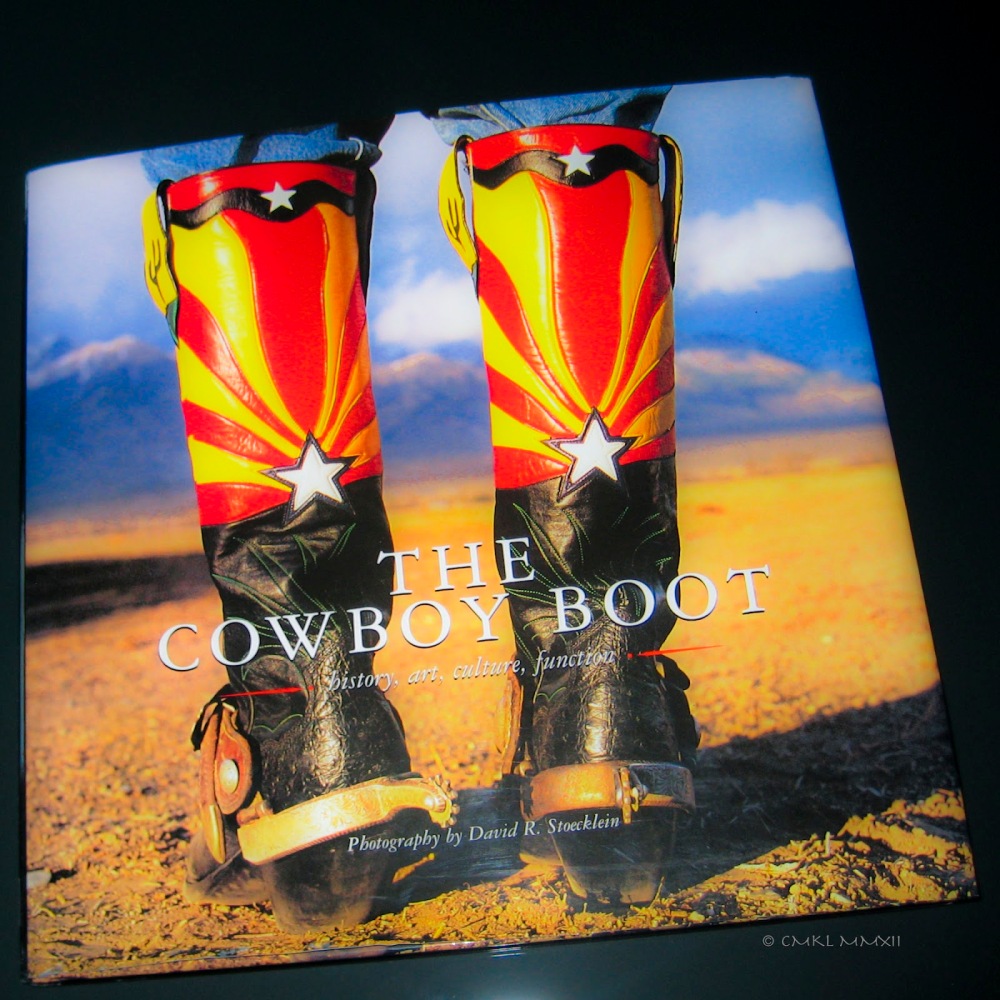 Don signed this book for us. There are several pages dedicated to him and his workshop in Ingram, Texas. 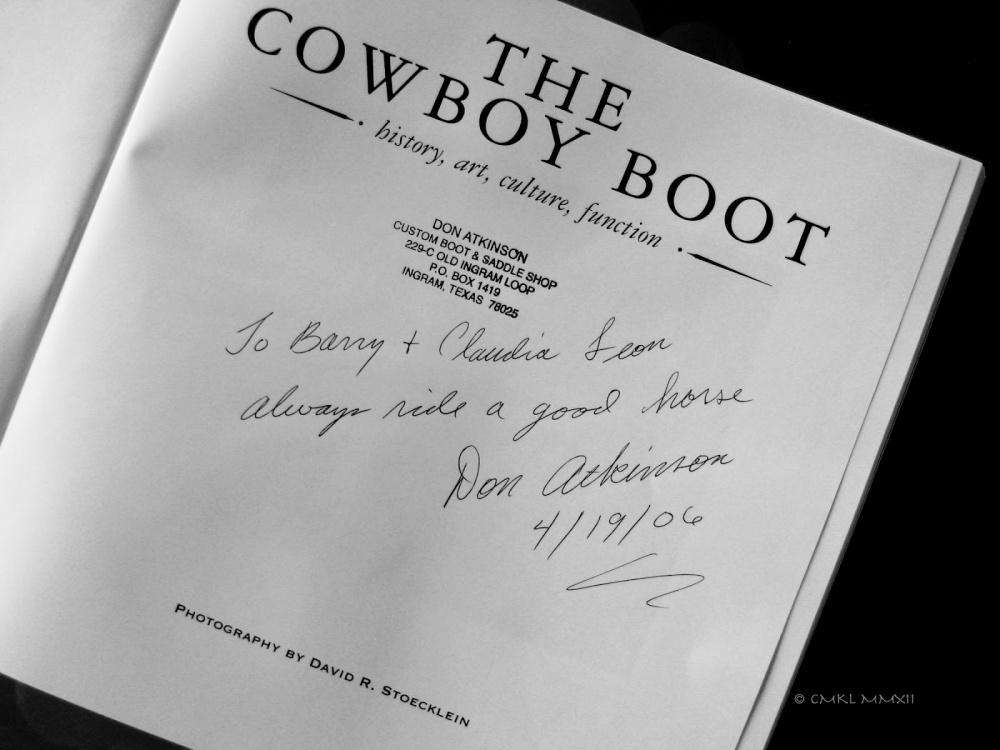 It is quite amazing to read about someone you know personally in a “coffee table book”, nevermind the fact that Don made boots both for Gene Autry and for me!!
The following two pictures are details, I took of images by David R. Stoecklein, as published in ‘The Cowboy Boot’ by STOECKLEIN Publishing. 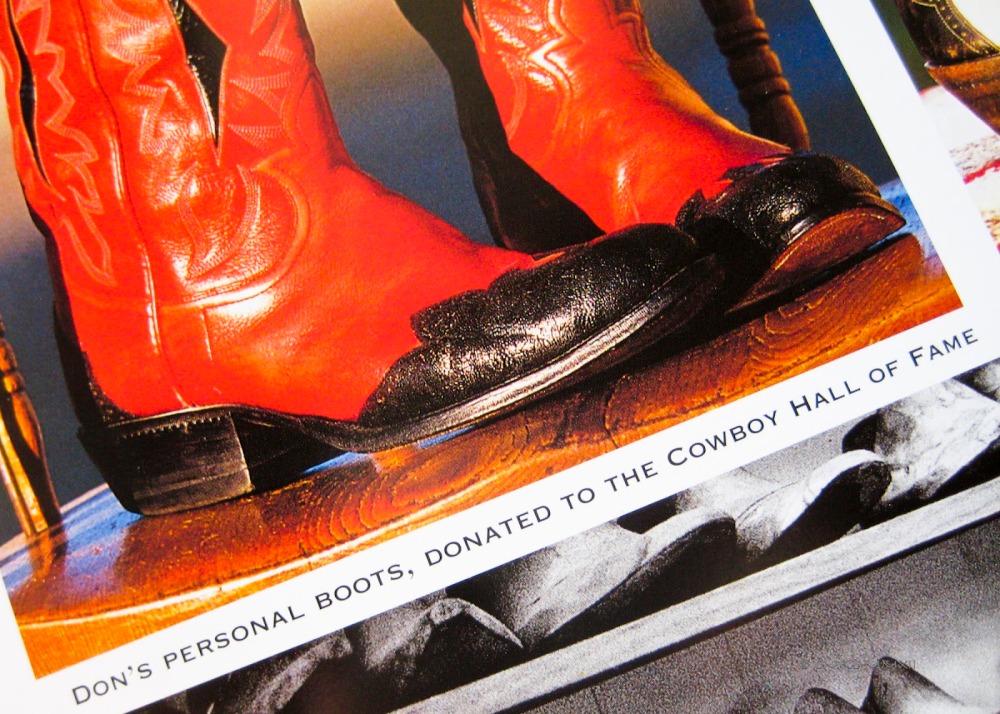 To me, the most amazing fact revealed in this book is color. Color and more color. Here you have hardworking everymen. Men, and a few women, who endure burning heat and freezing cold to do the best possible job in the vaste expense of the American West. And so many of them crave the extravagance of brightly colored and individually designed, handmade boots. Including Don himself, who’s tomato-red rodeo boots are now part of the Cowboy Hall of Fame.

Don measured his customer’s feet very carefully for the perfect fit. He suggested the cut of boot, length, and shape of shaft, heel, rim and pulls. He considered every detail for the kind of work or leisure situation, in which you intended to wear your boots. The fun part, of course, was your personal design and choices of stitching, decorations, applications, and whatnot to make your boots unique and uniquely your own.

Here we observe Don, as he measures some minor local celebrity’s feet, carefully recording each detail in his charts. 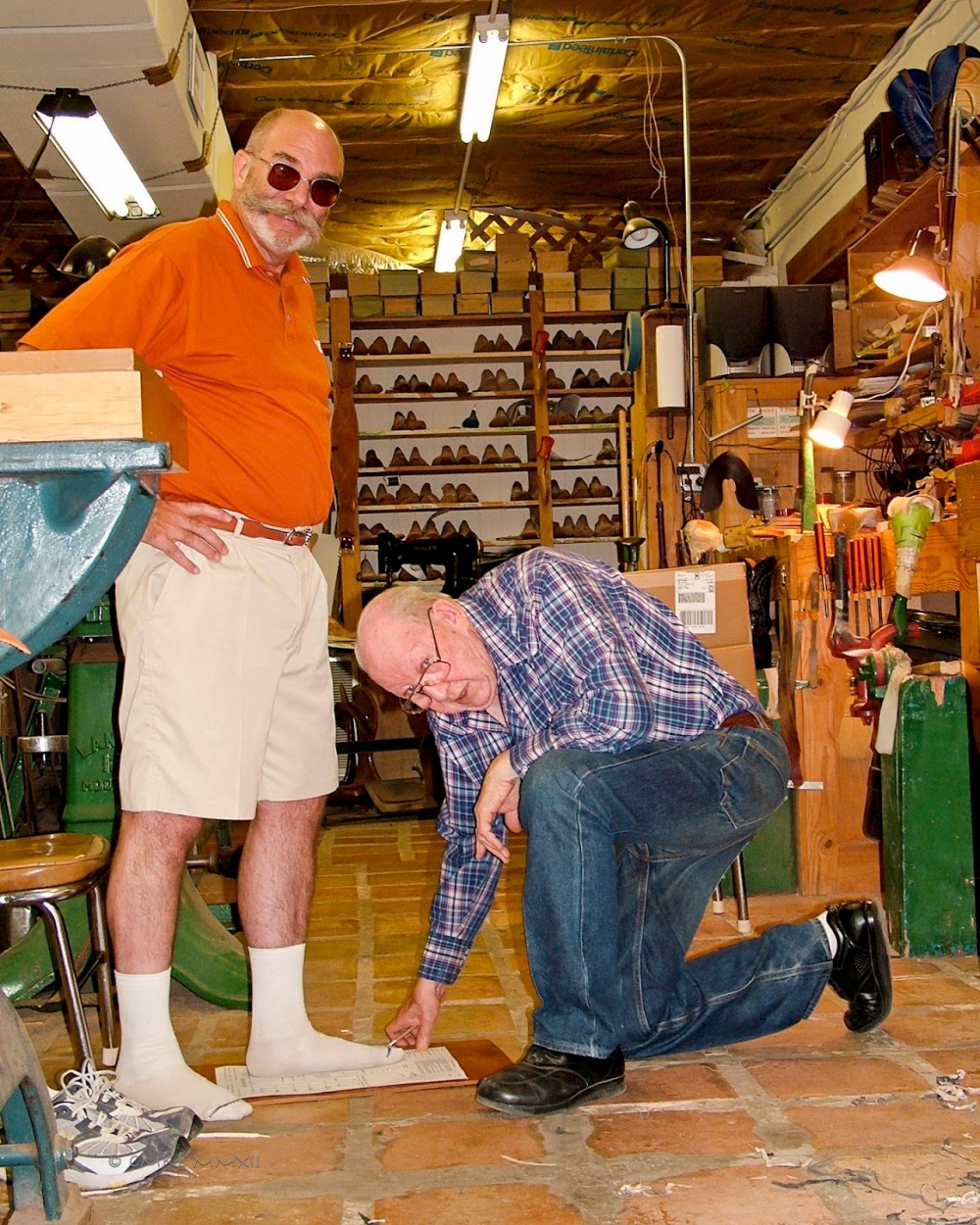 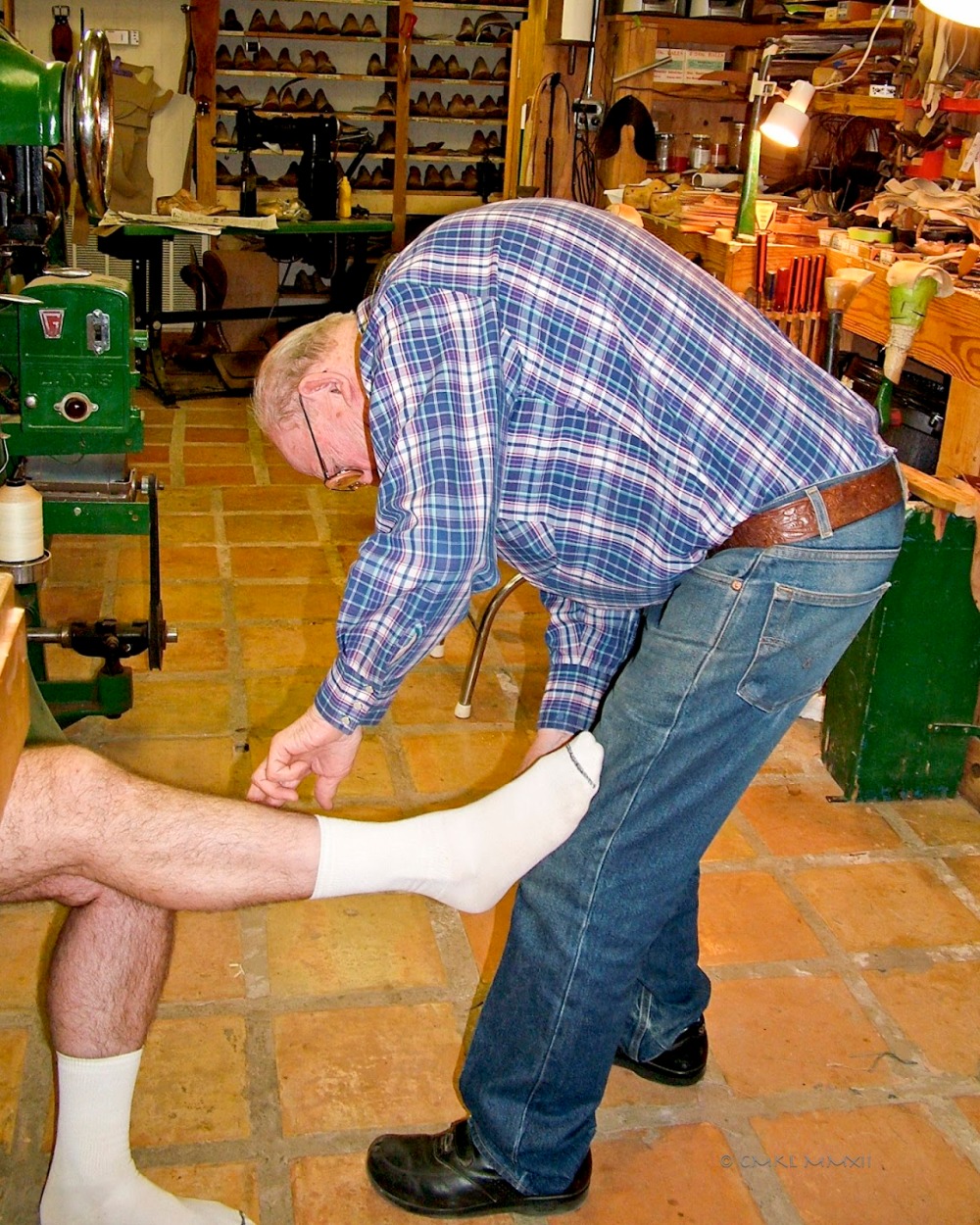 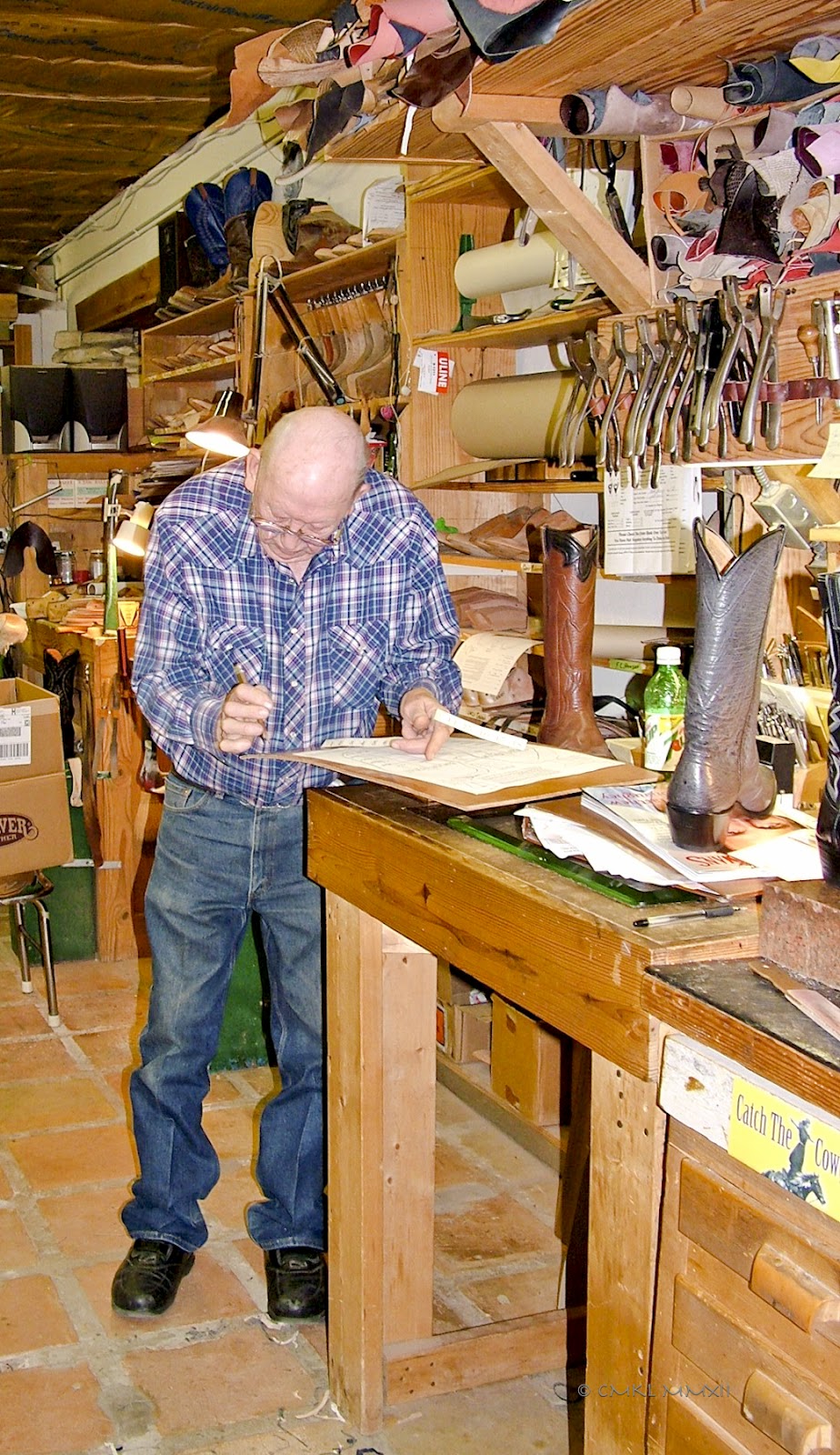 These pictures are from 2006 and you can read more about our boot building adventures with Don in my post ‘Fancy Dancing – not quite the Sherman Alexie way’ of 06/26/2011. You see there, how Barry finally wears his boots in 2009. I had to wait another year for mine. Not that I have any proof, but I firmly believe, my boots were the last pair Don ever finished! When I looked up the date for my ‘Fancy Dancing’ post just now, I realized that Don had died barely three weeks later, unbeknownst to us. 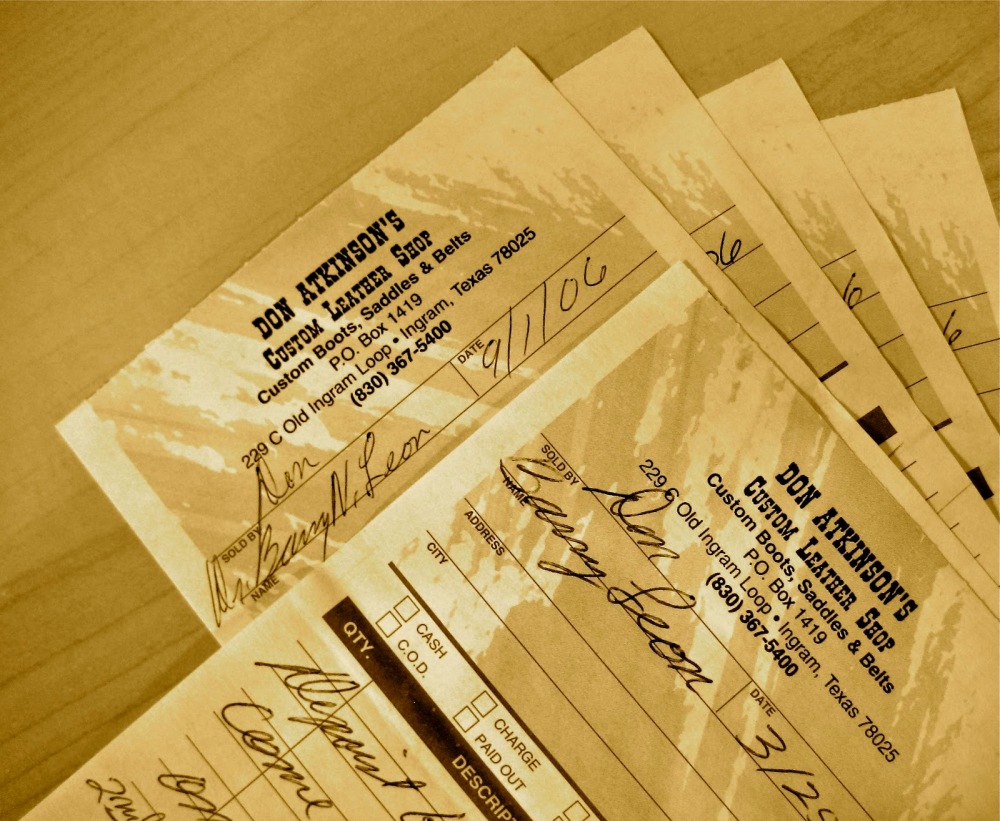 Don hated to be idle and wanted to die in his boots. During his last years, owing to health concerns, his boots morphed into orthopedic sneakers. But, heck, whatever Don actually wore on his feet, they were cowboy boots by default. I spoke to his neighbor, sculptor Tom Moss, the other day. Tom told me, Don got his wish. He died in his boots, right there in his workshop.

Good Bye, Don, it was a pleasure and an honor knowing you!