And the mystery continues.

Our first clutch of swallows this year had to cope with their dead father sticking upside down in their midst à la Edgar Allen Poe, while mother fluttered helplessly about in agitation. Now the entire second clutch disappeared overnight. What evil lurks on my porches in the darkness of night?

I need not reprise the first part of this feathery tragedy, it’s laid out in sad detail in my post of May 16, 2012, called “Domestic Disaster Descends”, should you wish to refresh your memory. As you remember from subsequent posts, ultimately, all five fletchlings made it back to the nest after their father’s untimely death and flew off into the sunset shortly thereafter. The first clutch in the second nest on our other porch also matured nicely, so the first breeding of the 2012 swallow season on El Rancho Leon produced ten offspring.

Both nests remained occupied, and in due course, second clutches of barn swallow eggs were laid, incubated and hatched. All seemed well in the avian universe, when suddenly all chicks, the entire second clutch, in one night, in both nests, vanished without a trace. The rim of one of the mud cup nests was broken off in clumps, which lay scattered below the nest. That was the only evidence of fowl foul play.

May 2012
– first fortnight: uneventful
– May 14: Mr. Rustico falls ill, rests in the back of the nest
– May 15: Mr. Rustico found dead in the nest, hatchlings are distraught

Some members of the first clutches remain in the area. 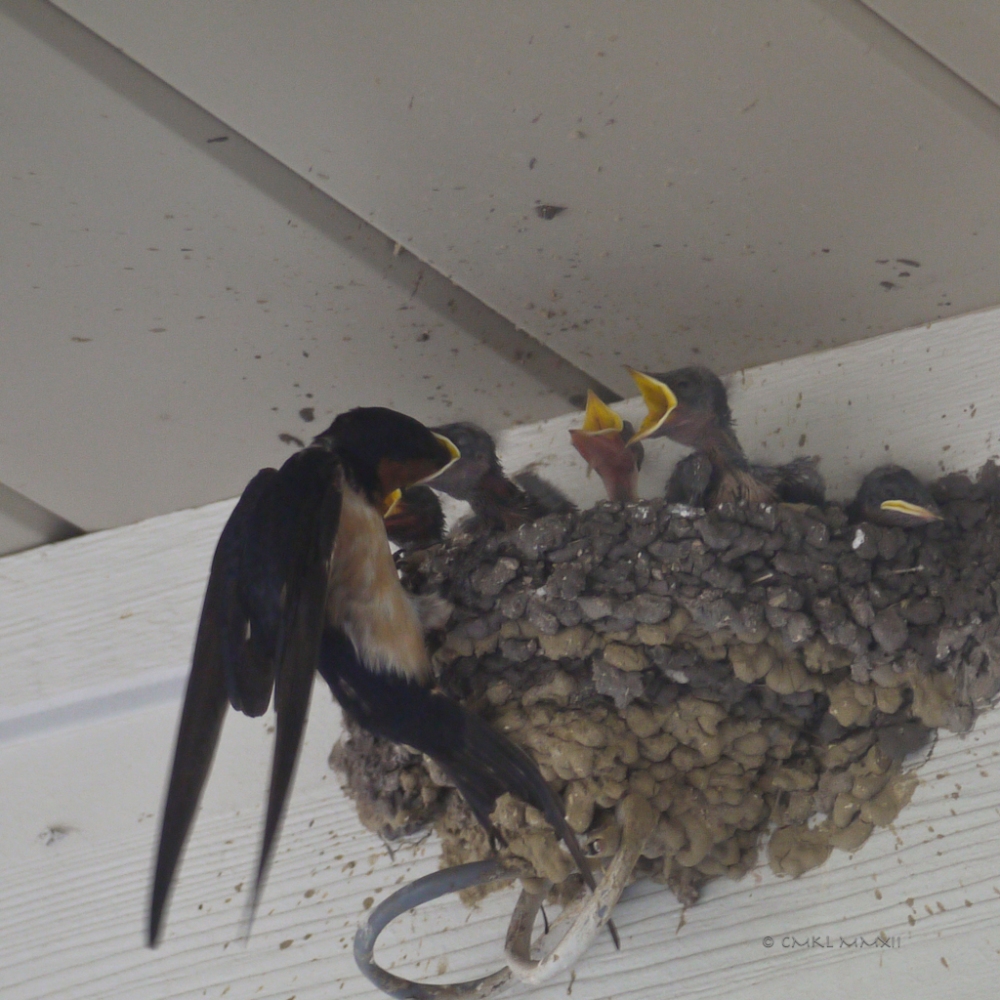 – July 04: Discussion among the casually convened panel of local biologists along the banks of the river Llano regarding possible vanishing causes. Conclusion: predatory nocturnal birds

– July 05: Clean up crew in hazmat suits prepare to neutralize the porches

Oh, ok. Dressed in rubber boots, long sleeve shirt and jeans, surgical gloves, face mask, cap, I, by my lonesome, proceeded this morning to scrape mountains of bird doo-doo from both porches. The more easterly porch was soon too hot to do more, but the other one got a good scrubbing with hot, soapy vinegar-water from ceiling to floor. No more birds, please, at least not that close to my windows. Baby bird snatchers are by no means limited to other birds or raccoons, for example. Those hatchlings also attract our local rattlers – not the company I’m looking for!