Skip to content
Posted on September 13, 2012September 3, 2018 by CMKL
On January 12, 2012, I narrated the tale of the slightly late arrival of our fantastic Christmas package (Ho Ho Ho – sólo un poco tarde). We enjoyed my friend Patrizia’s gifts so very much, but she was saddened because items appeared to be missing from her care package. We speculated freely about a sweet-toothed customs agent, who had secretly feasted on our German Christmas goodies. After all, it’s a well-known fact, they ARE the best on earth. I believe the Chief Elf once published an official statement to the effect. We also considered the possibility that the included sparklers might have been removed from the package as hazardous explosive materials. But as it turns out now, on September 12, there had been something regarding those missing Lebkuchen and Wunderkerzen (spice cake and sparklers), I didn’t quite understand in January. By Santa Claus, did it ever become clear today!
This morning we received a call from our Atenas Post Office, a courtesy call you might say, to get our butts on down to the office and empty or postal box. Having only arrived back in Costa Rica a few days ago and not yet fully in the swing of things, I asked my BetterHalf, do you have the mailbox key? I don’t know, he answered. Well, I asked, what (expletive removed) do you mean? This highly intelligent conversation resulted in two facts. Firstly, the key was on his keyring. Secondly, no-one had checked our postal box since the end of January, when we left for Texas. Nearly eight months, hell on wheels!!!

Naturally, we jumped in the car and took the arduous seven-minute drive down to the center of Atenas, where the post office is located, just a half-a-block off the Mercado Municipal and a couple of blocks south of our veterinarian’s practice. Checking our box, it turned out that not a whole lot of mail had accumulated in all those months. Come it think of it, no actual mail at all, just flyers. I guess we’re not that hugely popular. But there was one official notification and that piece of paper was the crux that had prompted the call to our house. It was the usual notice one finds in a P.O. box, whenever there’s a package too large to fit in said box. Our notice was covered with annotations in black, blue and even red ink, it was the personification of an exclamation point. The postal employees had obviously been sick and tired of holding on to my, pay attention now, second (!) Christmas package from Patrizia! The usually quite cordial postal official told me, his eyebrows severely raised, Señora, we’ve kept this for you since March!!

This must be one of the longer odysseys on record for overseas packages. All in all, it took nine months to be delivered to me. Congratulations, it’s a healthy, full-term Christmas package! The first three months of its journey, it bounced around, presumably, within the complicated Costarican import and customs system. Followed by a six months incubation period in the idyllic back room of the Atenas office, right next to the safe with all the beautiful, colorful stamps.

We took our surprise baby home and opened it carefully. A songbook with German Christmas Carols greeted us first. Since we’re both unable to sing in ways acceptable to human ears, it certainly is to the advantage of all those around us, that we now have several months to practice humming. Indubitably, we’re the only Jewish household in Costa Rica with its very own Christmas songbook sporting a “Shalom” dedication!

The next item revealed turned out to be a package of Christmas napkins with a mystery message. “This isn’t Barry” perhaps? Or “don’t drool, Barry”? We will investigate this Masonic Santa Claus enigma in due course.

Beneath these two paper-based artifacts, our intrepid archeological excavation of goods of Christmas Past was less fortunate. 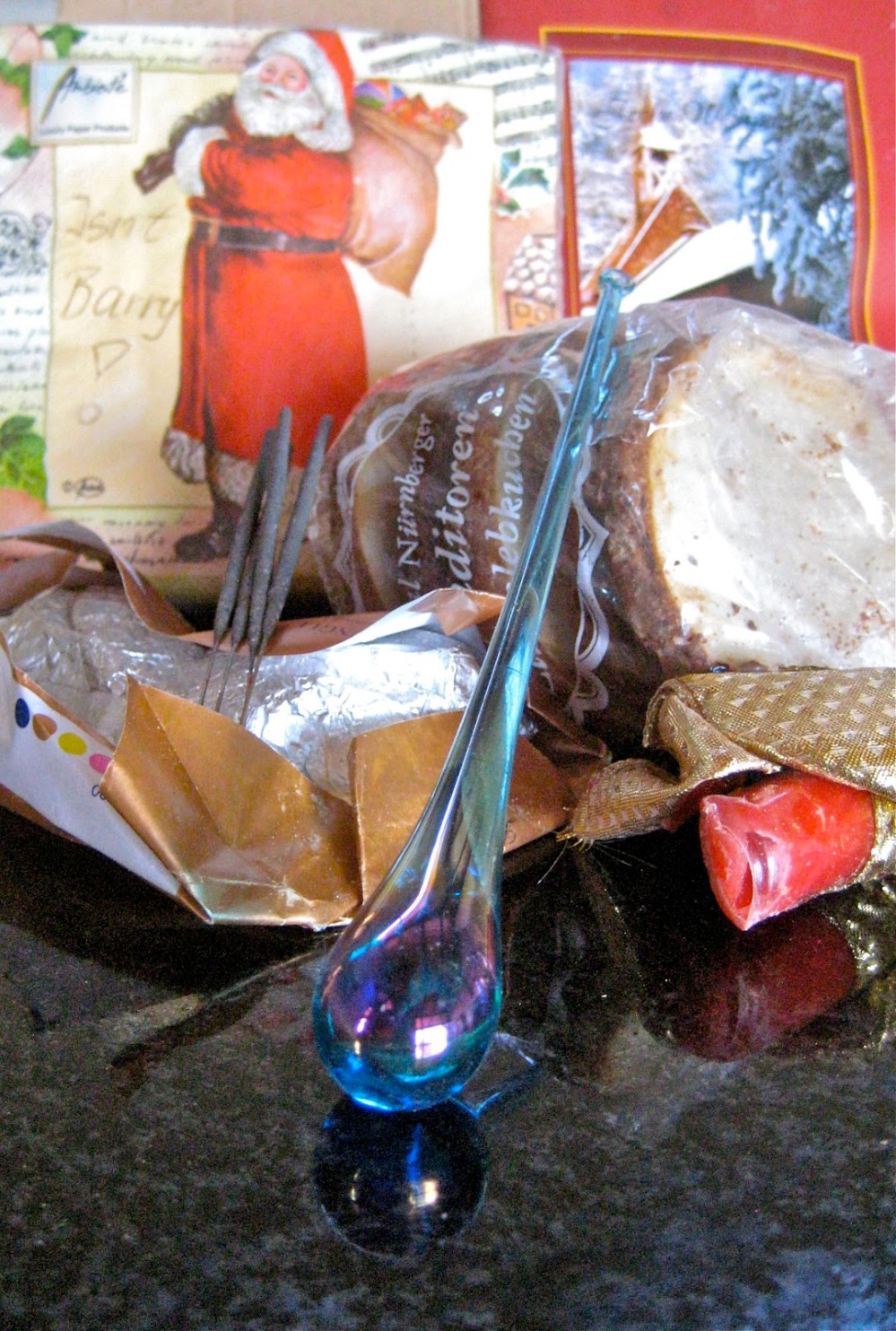 The advent candle was broken, the Lebkuchen was smooshed and the chocolate, oh, that delicious Sprüngli chocolate had fermented into a monstrous lump, bursting it’s shiny outer wrapper and molding itself around the candle’s base. Oy vey! What a waste of delectable calories. I wish, our imagined customs thief actually had enjoyed it all!
On the other hand, the sparklers hadn’t been confiscated and the blown glass ornament was intact to be enjoyed, maybe not on a tree, but catching the tropical sunlight, setting off radiant cobalt sparkles of its own.
Once more, thank you, Patrizia and Walter! You’re the best!!