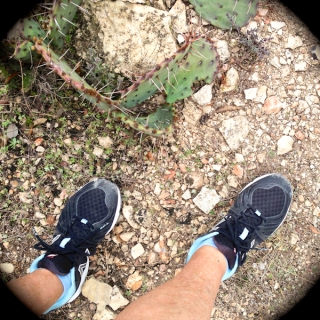 Sometimes, just for a few seconds, walking seems like fun. Sometimes. If your body is out of shape, your joints ache, your bulging disks pinch and your throat makes little gurgling sounds at each step, not so much.

Some fortunate people are born athletic, strong and competitive. I was not. Granted, I was a tomboy, climbing trees, riding my bike and skating on those roller skates, you had to screw onto your shoes. A half a block down our street was a steep alley. It was the perfect ‘dare’ situation to schuss down on one’s skates, crouched low, shrieking, with the wind whipping around your ears – greatly exaggerated in my memory, I’m sure! At our grandmother’s house, I used to climb out the upstairs window, scoot along the roof, over the garage, and down a quince tree, just because it was a more entertaining way to leave the house, than through a boring door. The same grandmother, a splendid horsewoman, introduced me to the sport of dressage at the tender age of ten.

I may not have been meant to ride horses, considering that during my very first lesson the pretty Arabian, I had been assigned, threw me off like a rag doll. I was lying helplessly in the peaty dirt of the arena for a small eternity until I could breathe again. Naturally, I was ordered to climb right back up in the saddle. Neither my grandmother, nor the instructor considered it inadvisable, or possibly even reckless, to put a ten-year-old novice on a stallion, simply because he was the smallest horse, the stable had available. The post-WW II French occupation of my grandmother’s town in Southern Germany lasted well beyond its official termination on May 5, 1955, so the municipal riding stables, sometimes called Tattersall in German, had to shared facilities with French cavalry. As it happened, simultaneously with the riding instructions for the pony club members, and thus during my very first horseback riding lesson, a high ranking French officer had chosen to exercise his stallion, which made my stallion a smidgen cranky. The Frenchy never paid the slightest attention to my misfortune. In his stern visage, I could read clearly that little German girls better stay out of his way. Despite these ominous beginnings, I enjoyed riding very much and sailing and hiking, and even a little alpine skiing, though those slopes scared the bejeebers out of me. But the more vigorous sporting activities of my youth only lasted until I was in my mid-twenties when a rather serious car accident put an end to it all and I exchanged sweaty breeches for heels and a more sedate, ladylike lifestyle. Over the following decades, I chucked the heels for Birkis and pencil skirts for muumuus. The former gourmet had transmogrified into a gourmand.

Before we continue with thoughts about exercise, I have to get back to the term “Tattersall”, meaning a riding school or stables for rent-a-horse establishments, sort of dude ranches in cities. That word is, strangely, part of my earliest vocabulary. Growing up in the city of Hannover in Northern Germany, a Tattersall was right down the block from our apartment. Owing to a minor, but traumatic, childhood experience, I recall those stables quite clearly, even though I never actually saw a horse there. One day, my mother gave in to my begging and bought me a scoop of Waldmeister* ice cream from a street vendor, we regularly passed on our way home. As I was proudly carrying my ice cream cone, I had to step down from the side walk over a deep curb, onto the cobbled coach entry to the Tattersall. During that maneuver, trying to balance myself, I tilted the cone and my ice cream splattered on the ground. Oh, how I cried! But my mother had no mercy, there was no replacement scoop. To this day, I’ve never experienced Waldmeister* flavored ice cream!

During my years in the US, I’ve sometimes used ‘tattersall’ in reference to a horse riding facility, but nobody has, so far, recognized the term. Here, tattersall is a colorful fabric pattern, usually thin, darker checks on a light background. I finally googled my tattersallian enigma and found out that tattersall and horses indeed belong together. Richard Tattersall (1724 – 1795) was the founder of Tattersall’s, the esteemed horse auction house. He started his career as stud groom to the second Duke of Kingston and handled race horses for the Prince of Wales, later King George IV, as well. ‘Old Tatt’ built a family horse trading empire lasting into the 20th century. Thus we’ve established a crystal clear connection between the horse trading business and buildings used for housing and schooling horses – in London, England? But of course! The House of Hanover succeeded the House of Stuart in 1714, essentially making Hannover part of Great Britain. Hence this British term’s use in good old Germany. When I street-viewed my former neighborhood in Hannover, I even found a lane called “Tattersall” just two houses over from our old place. This must be, where the stables used to be, almost 60 years ago! Isn’t the internet fabulous? You can chase old ghosts up and down forgotten alleys.

Today, however, we were chased, not be ghosts, but by a fierce wind on our four mile walk around the ranchlands. Yes, four miles in one hour and thirteen minutes of briskly striding into the breeze! We enjoyed such an absorbing conversation that we didn’t notice, how far we had gone. That is, Barry kept me entertained, while I was huffing and puffing up those hills – I can only speak during the downhill portions. As of this afternoon, I’ve walked every day for at least 1 mile/1.6 Km for a total of 40.8 miles/65.7 Km in fourteen walks. My average pace is 18’38” per mile or 11’35” per kilometer and I’ve burned a grand total of 3 521 calories during these exercises. For a confirmed couch potato, not  too shabby! 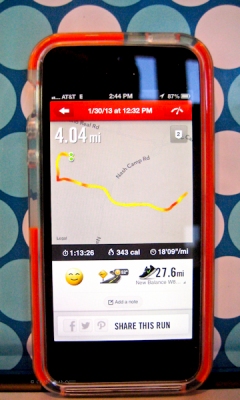 All these lovely statistics come curtesy of Nike, not the Goddess, but the swoosh people. My (free) NikeRunning iPhone app is now a constant companion on my walks. It does make a difference in my attitude toward this much needed, but also little loved exercise regiment. You see your progress and you see your achievements in real terms. So many calories burned – so much more Feta cheese in your salad, simple as that.

The app records pretty much everything there is know about your activity. In addition to time/distance/pace, you have a record of the ambient temperature, your course, your emotion and in which shoes you walked. As you can see, I’ve already put 27.6 miles on my new New Balance running shoes! A different window gives you additional statistics and summaries. If you like, you can convert the whole darn thing into metrics or share your accomplishments – a little bragging keeps you going!!

I really hope that both apps, MyFitnessPal (see my previous post) and NikeRunning will continue to guide me back into a healthier me. You are requested to keep an eye on me!

*Waldmeister: Galium odoratum or Asperula odorata or sweet woodruff.
from Wiki:
As the epithet odoratum suggests, the plant is strongly scented, the sweet scent being derived from coumarin. This scent increases on wilting and then persists on drying, and the dried plant is used in potpourri and as a moth deterrent. In Germany, it is also used to flavor certain foods, especially “Maibowle” (flavored white wine), “Berliner Weiße” (flavored specialty beer) and ice cream.

One thought on “Focus and Footsteps … Aches and Achievements”