Skip to content
Posted on February 2, 2013September 4, 2018 by CMKL
To snack a little here and munch a little there is verboten at the moment. Instead, I have to be clever about preparing tasty, funky dishes that appeal to my desire for flavor and texture, yet are low in caloric value.

One ingredient I’m using like mad is lettuce. Lettuce is not necessarily always the same old leafy, boring or taste-free whatnot. Iceberg, romaine, red or green-leaved butterhead and curly this or flat that, the choices make your head spin. Since I’m perpetually confused, as to which Hasenfutter, as my father called it, is what, I spent some time learning about daisies and dandelions this morning.

Skipping the more common selections, like iceberg lettuce, let’s take a closer look at the Asteraceae, the daisy family, since several of my favorite European daisies are becoming more widely appreciated in the US.

Nowadays an easily obtainable ‘daisy’ lettuce is Chicorum endivia. C. endivia is further split into C. endivia var. crispum or endive, also called curly-leaved endive or frisée, and into C. endivia var. latifolium or escarole, the flat-leaved endive. Both the frisée and the escarole have become (nearly) mainstream in the USA. They taste a little bitter, but I do appreciate those bitter flavors and like to mix them with milder greens for a big salad. If you use olive oil and sweet, balsamic vinegar to dress your salad, they act as an emollient, softening the harsher savor – and you save calories over prepared dressings. Did you know that McDonald’s Caesar salad with grilled chicken has only 190 calories, but that the envelope of Newman’s Own Creamy Caesar Dressing served with it, also contains 190 calories? A whopping 170 of them from fat!

I also enjoy Chicorum intybus, which is not such a hot item with many Americans. C. intybus, the other ‘chicory’ is sold as radicchio and chicorée, which in the US is called Belgian endive, even though it’s not endive; and no longer Belgian either, since the majority exporter is now France. The torpedo-shaped heads were, however, first cultivated as a blanched vegetable in Belgium. Hence it’s called Witloof chicory after it’s place of accidental discovery in the 1830ieth. It’s grown in the dark to generate white – as in no green – buds for consumption, the same way asparagus is grown subterraneously in Europe to produce the famed white spears. I love chicorée with Greek yogurt and fresh fruit, so refreshing and delicious on a hot summer day.

Radicchio comes in a variety of manifestation also. The one I like best is a tight-leaved variety, which essentially looks like a small head of red cabbage. This lettuce is quite peppery. I like to add it to milder green leaved lettuces for added spice.

And those are just the varieties, to which I have access here in rural Texas. In a larger metropolitan area, the choices must be even more diverse. If you have a farmer’s market with a rich selection nearby, all the better! For the last couple of weeks or so, I’ve used different lettuce types as a substitute for bread and pasta. If you’re dieting, lettuce adds bulk, but hardly any calories to your meals.

Two posts ago you saw a small mountain of shredded radicchio dominate a low-calorie fish plate. Today you’ll encounter Rouge d’Hiver and green mache salad greens as a base for a well rounded and tasty chicken dinner. Anyone not currently dieting is free to stick with the delicious Parmigiano Penne Pasta that Barry got, may he be cursed – just kiddin’! Everything needs to be calibrated, of course, including the greens: 1 oz of lettuce for less than 5 calories are a tasty noodle replacement. Your hips will thank you 🙂

Meanwhile, the vegetables were stewing on my induction stovetop. A medley of tomatillos, red onion and red and green peppers. I would’ve preferred poblano chilies, but we were out. In my burning interest in cutting calories, I replaced the usual oil with chicken broth to prepare my veggies. To spice it up, I used a generous helping of freshly ground black pepper with citrus bits and cilantro paste. Both seasonings are commercial products by ‘McCormick’ and ‘Gourmet Garden’ respectively. I can highly recommend both, as well as other ‘Gourmet Garden’ preparations, like ginger and garlic pastes, for ease of use and solid flavor. I use the cilantro paste especially eagerly because I detest chopping fresh cilantro. It clings to everything with a vengeance, scissors, dishes, knives, skin, cutting boards, countertops, you name it.

For protein, we had skinless chicken tenders, which I marinated in fresh lime juice, Kikkoman Ponzu citrus soya sauce, and black pepper while getting the veggies going. Eventually, the tenders found themselves as a single layer in a corning ware dish with their marinade. I brushed the chicken pieces with some garlic and cilantro paste and sprinkled Parmigiano over the arrangement. Since this is a dry and hard cheese, I added two tablespoons of half-and-half (bad enough as far as calories go, but better than heavy cream), to moisten the surface. I baked the chicken tenders at 375ºF (convection) for about eight minutes covered under alu-foil, then six or so more minutes without cover. 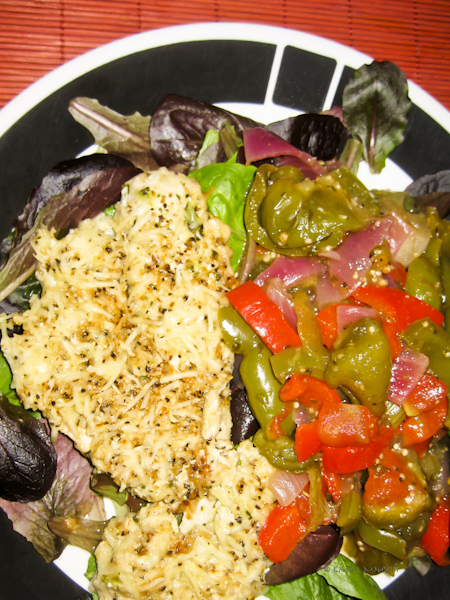 Browning the cheese for a couple of minutes under the broiler prettifies the appearance and you’re in business for a very tasty and succulent dish. My 5.5 oz or 156 g portion was a mere 300 calories, Parmigiano included. The nearly eight ounces of vegetable stew I also ate, added up to another 100 calories. A satisfying meal, with only 6 fat calories from the chicken and the cheese. Definitely, plate licking good! 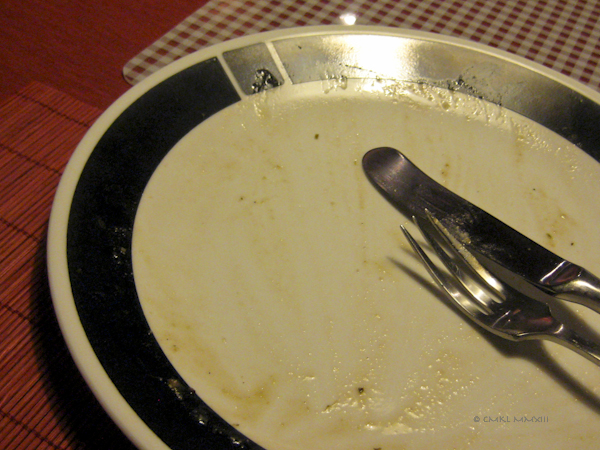