Skip to content
Posted on February 26, 2013September 4, 2018 by CMKL
Today’s exercise consisted of a measly two-mile walk. Two very tough miles. During the first mile, when the high winds with up to 44 miles/hour gusts propelled us forward, arms flailing in the wind like rag doll limbs, the task was easy but dangerous. The irregular ebb and flow of steady wind and highly volatile gusts could push you off your tangled feet and slam you, face down to the ground. But the return mile was the real challenge.
You lean against an invisible wall made of invisible, puffy cushions, which are pushed by invisible giants against your insignificant person. One of these cushions is pressed against your face, robbing you of your breath, while you struggle forward, one unsteady step at a time, all the while the trees around you groan under the force of the wind and howling banshees streak through creek beds.

Barry was trying to break the force of the wind, striding directly into the wind ahead of me. As he was luffing for me, his jacket flapped and crackled like a sail, he had forgotten to reef before the storm descended, even though it was zipped up. Since it was also cold, well let’s say, cool, the wind was quite biting and I soon imagined myself turning into the ruddy-cheeked youngster, which has graced the label of bottles of Rotbäckchen, a tongue in cheek take off on Rotkäppchen (Little Red Riding Hood), since 1952. I remember this juice very well. It was specially formulated to support a healthy upbringing of post-war generations of children. My mother, who raised my older sister under the extreme food shortage conditions, which prevailed in Europe during WW II and for years following the armistice, never entirely overcame that trauma of undernourished children. She religiously fed us a daily dose of ‘Rotbäckchen’ juice, which was sold in pharmacies and therefore trustworthy and money well spent. Come to think of it, I bet, the same, ruthless pharmacist sold her that hated cod liver oil as well.

This is as far as the narrative went yesterday. The tempest has since passed and all of nature is breathing a sigh of relief. We went to sunny Kerrville today for an appointment, and I took the opportunity to walk in one of several city parks, the Louise Hays Park. It has a beautifully maintained walking path, snaking along the Guadalupe River. You can cross the river by way of pedestrian bridges to reach, for example, the city library.

I took the challenge of a little extra exercise and ran up the steep staircase leading to the top of the river bank and then down again. I’m such a tough broad 😉 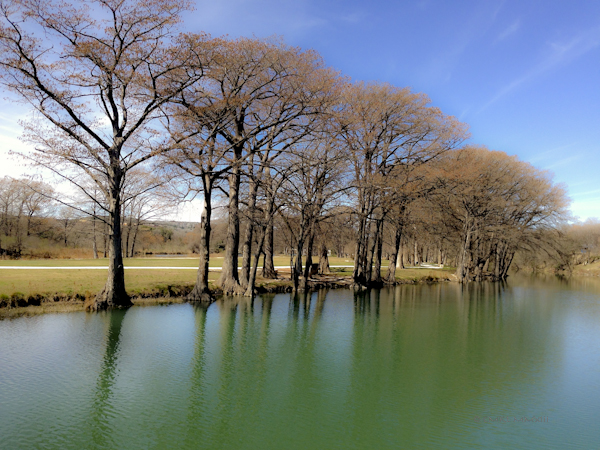 It was really nice to have a different venue, in which to play!