Skip to content
Posted on March 25, 2013September 4, 2018 by CMKL
Dear Readers, have you missed me these past two weeks or so? I’ve certainly wished to share our ongoing travel adventures, but the combination of having an upper respiratory infection while being on a long distance road trip proved to be too exhausting to engage in creative wordplay. Besides, I forgot, yes, I actually forgot to pack the cable to upload images from my camera to the laptop. Fortunately, my phone is of a more recent vintage and freely converses with my computer without the need for an umbilical cord. That allowed me to at least post a few pictures on FB along the way …
Last we met, I had just completed a round trip from the ranch to drop off Barry in Austin for his trip to Florida to help his nonagenarian parents to move cross country. The following Saturday, I joint a bunch of my neighbors to attend the ‘Fiesta Dinner’ of the Kimble County Historical Commission, who was throwing this delectable bash to raise the funds necessary for a much needed new museum.

It was a fun evening of Old West lore, which had actually happened right here in our little town of Junction. It’s easy to forget sometimes, how far out West we really are! Our bunch of misfits concluded the evening at the Junction Rivers Winery, our favorite hang-out.
And what happened on Sunday? Sunday, I woke up coughing. Coughing, and with itchy eyes, but no specific “cold” symptoms. Since I had to drive to Junction Monday morning anyway, I dropped by our family doctor, who thought my troubles were most likely allergies. Okey dokey, anti-histamine time! Even two days later, when I drove back to Austin, to fetch Barry from the airport, I still thought, I was having an unusually strong allergic reaction to some pollen or other botanical nuisance. 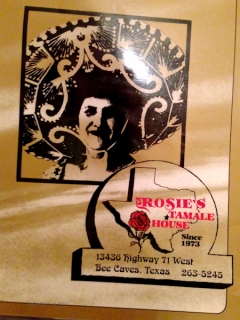 Before embarking on our three-hour drive home from the airport, we searched for and actually found a Mexican restaurant, which my elephant-memory-ed husband fondly recalled from his student days, oh, way back in the last century. Rosie’s Tamale House, still family run, is just a half a block down the street from the tiny original building, where Barry ate over forty years ago. Sometimes you can go back! After our tasty dinner, we drove home, with a quick supply run in historic Fredericksburg.

The next day was devoted to travel preparations for our big trip to Santa Fe starting Friday morning … and to fiercely ignoring the now obvious signs of not allergies, but illness. Hell’s bells, those cold symptoms arrived and settled with a vengeance. Thus our first stop on route to New Mexico was the pharmacy in Junction to stock up on soothing goodies – not that they did much good.

Despite my affliction, we had a great drive, alternating on the wheel every hour, munching on veggies and cheese cubes, while enjoying the endless horizon of West Texas. Shortly after Fort Stockton, we left the interstate highway system for smaller county roads, aiming more or less straight NNW toward the Sangre de Cristo mountain range and Santa Fe. But before reaching these higher elevations, we had to cross many miles of flat Texas and New Mexico desert, showing nothing more than a lot of space with the occasional cattle operation and a lot of oil and gas exploration.

The last Texas outpost in this area is Pecos, a true frontier town.

Check out its colorful history here: West of Pecos Museum. We didn’t linger, pressing on toward Artesia, New Mexico, instead. Artesia is also quite a historical place. However, it’s fame stems from the sizzling hot days of the nearby Alamogordo testing site and the Cold War. This small town in the middle of no-where built the one and only US-American underground elementary school, which, in the early 1960s doubled as a fully equipped fallout shelter for over 2000 people. We didn’t see Abo Elementary School, but the more contemporary petroleum industry was quite apparent all around town. 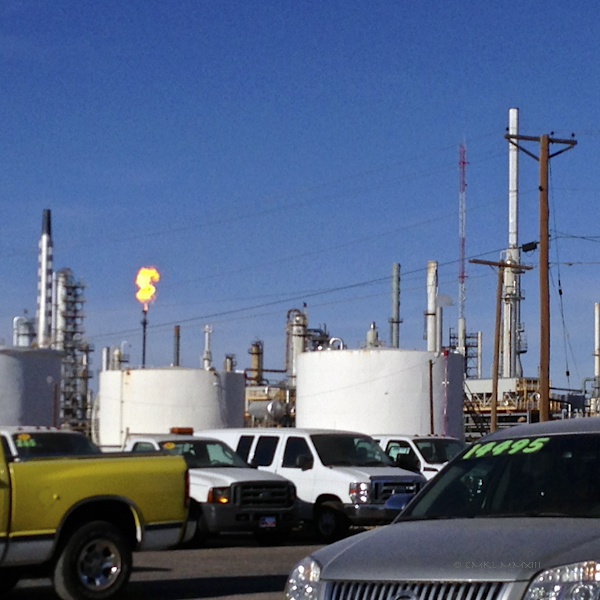 And some other interesting odds and ends popped up,
as we were passing through town.

After Artesia we continued through the vast desert, encountering little until we
reached our destination for the night, Roswell, NM.

Naturally, it’s a little scary to actually sleep in Roswell, but my cold was in full bloom by now and I needed a bed badly enough, to not care in the least about the potential danger of an alien invasion.

Luckily, we weren’t molested by body snatchers and proceeded refreshed into higher elevations the next morning, to arrive at our exchange home in Santa Fe by midday Saturday. 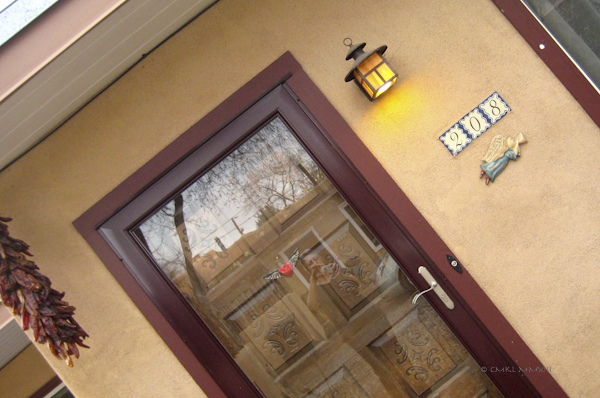 3 thoughts on “Off To Santa Fe, New Mexico – Part One”