Skip to content
Posted on March 27, 2013September 5, 2018 by CMKL
Sunday dawned crisp and beautiful. We were eager to get out there and discover further treasures – yet, now we had two sickly people on hand. Apparently, it’s never a good idea to greet your husband with kisses, when you suffer from the early stages of a cold, even if your physician classifies it as allergies …. sniffling in unison, we first did some grocery shopping to assure survival, before setting out to conquer a little more of this charming city.
Sundays in Santa Fe feature an Artisan Market at the newly revamped railyard sector of town, the site of the weekday’s Farmer’s Market and the Performing Arts Center ‘SITE’ and a variety of contemporary art galleries. Walking over there in the bright sunshine, we stumbled upon an amazing sight. Ms. Siri Hollander’s horses playing and neighing everywhere! 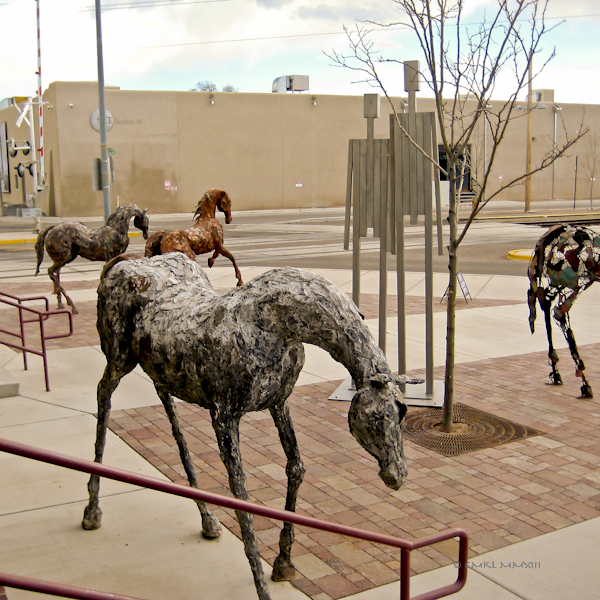 Her lively, forged horses were delightfully distributed outside of, as well as inside, Mr. Mark White’s impressive second Santa Fe Gallery at the Railyard. His first gallery on Canyon Road, featuring his mobiles, has been a local attraction for many years. This new place showcases fresh and edgy works, including his own and his son’s, Ethan White.
After spending such an invigorating time in the White gallery, the Artisan Market was a bit of a letdown, except for some funky knit hats and a lovely tea shop, called Artful Tea. Miss Karen sold me some sorely needed smocked China Keemun,  which I’ve loved since first tasting it, many years ago, in a tea shop in Stratford-upon-Avon, Ontario, Canada. Subsequently we took a leisurely walk up Guadalupe Street, passing a kaleidoscope of shops, galleries and restaurant in this hip section of town, when we came across the Rio Bravo Trading Company, right across from this mural of the epic struggle between indigenous and conquering peoples, tradition and futuristic views, not to mention the iron horse and the Sangre de Cristo mountains. 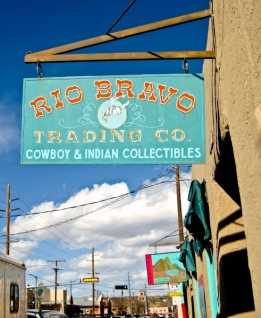 As far as I know, there’s no website for the Rio Bravo Trading Company, or it’s owner, Mr. Randy Rodriguez, whom we met in the midst of getting-ready-for-a-trade-show turmoil. But despite the frantic comings and goings, he was kind enough to show us this and that from his extensive collection. Barry had been intrigued by a little something in the gallery window and purchased it in due course, while I fell hopelessly in love with this vintage Navajo bandolero pouch, made of buffalo hide and adorned with silver coinage.

Unfortunately, it was a few thousand dollars too dear, so it still safely resides at the trading company.
There is a nice write-up about Randy & his shop in the Chasing Santa Fe blog if you care to check it out.
Eventually, we wound up in the Plaza again and had a traditional Navajo dinner, Indian Fry Bread Tacos at the Blue Corn Cafe …
I just had to have SOMETHING Navajo!!