Skip to content
Posted on April 30, 2013September 7, 2018 by CMKL
Considering our not inconsiderable internet accessibility challenges, I better post posthaste, whenever given an opportunity. So, before the connectivity dims to a slow crawl again, I want to introduce to you one more small reminder of Saintes’ ancient past, namely the 1st century CE Termae of Mediolanum Santonum, as modern-day Saintes was called two thousand years ago when Rom made it one of its important trade-centers in Gaul. The Thermal Bath of Saint-Saloine are not at all as grand and important as the other Roman ruins in Saintes, the Honor Arch of Germanicus and Les Arènes, the amphitheater, but they have an intimate charm in a crumbly sort of a way.

As you work your way up the hilly and quiet residential streets of quartier St-Vivien toward the neighborhood cemetery, you notice a fenced, grassy area with piles of rocks and tumbled down stone walls here and there. Since the gate gaps crookedly open, you just kind of amble inside the enclosure. Surveying the softly undulating small area with stone artifacts scattered about, you realize, what an odd mixture of jumbled purpose and apparent antiquity they represent. There is a padlocked crypt of relatively modern vintage, containing a much more ancient, empty stone sarcophagus. The mausoleum is surrounded by partial walls of a much older and clearly not related period. This imbroglio is guarded by a stone sculpture, towering above it all, whose identity remains a mystery. The impressive statue has the wild beard & locks of Neptune with the wings of an Archangel. His furrowed brow and concerned, one-eyed gaze empower him with authority over this site. But who is he? I found no answer to this question, neither there, nor online.

The following two pictures show parts of the thermal heating system. The remains of large, interconnected boilers, which were used to heat water for a variety of baths and steam rooms. The precursors to our fancy modern spas! 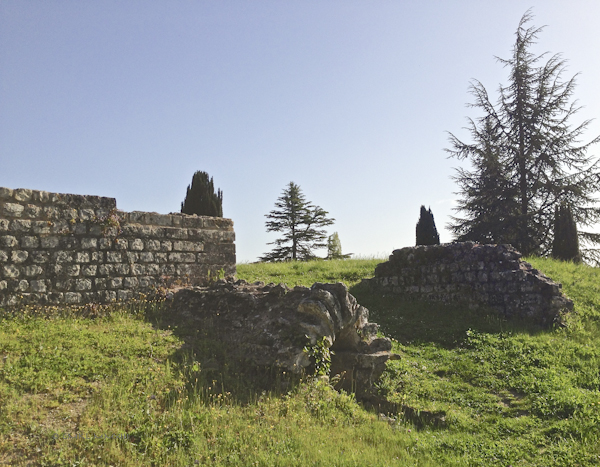 In the foreground, a tiny portion of the former aqueduct, which brought the water to the boilers, where it was heated for the baths & steam rooms. I love the splendid arch construction, which survived nearly two thousand years.

With the decline of Roman imperial power over the provinces and the withdrawal of troops from Gaul, the thermal baths fell into disuse during the third century CE and this important former center of socializing and well-being was repurposed as a necropolis. Soon thereafter, an early Christian sanctuary dedicated to Saint Saloine was constructed here as well, which would ultimately give this thermal bathing facility for Roman soldiers its permanent name. Both the saintly church and the grieving mourners have long since faded in our memory, as have the brave soldiers of an empire lost, who laughed and groused and drank their beer sitting on the very stones, I see here today.

Leaving the excavation area – where Roman mosaic floors were recently discovered – and looking back over my shoulder before continuing my run past the modern day cemetery next door, it struck me very strongly, how well integrated into contemporary 21st-century life this little area really is. Roman garrisons used to thrive, where modern apartment buildings now rise. True, indoor plumbing has, thankfully, replaced the public baths of Roman times, but we still go to the spa with friends to have fun and enjoy the blessings of bubbling mineral springs and aromatherapy. And we still tend our departed loved ones in cherished necropoli – life hasn’t changed that much in a couple of millennia now, or has it?

One thought on “To Bath or not to Bath”