Skip to content
Posted on July 26, 2013September 10, 2018 by CMKL
We’re honing our siege warfare expertise. We’re laying in supplies. We’re preparing for a city bursting at her seams. Our last three days in Vancouver the Beautiful coincide with one of the busiest weekends of the summer.
The main event will commence tomorrow night at 22:30h offshore in English Bay. The ‘Celebration of Light‘, a spectacular, international fireworks competition will light up the sky over Vancouver. Nearly a half a million people are expected to congregate at and near the beaches a mere block from us.

Preparations for this huge event have been ongoing for the last week. The city workers have been busy! The proud and solitary Inukshuk has been fenced in for its own protection. 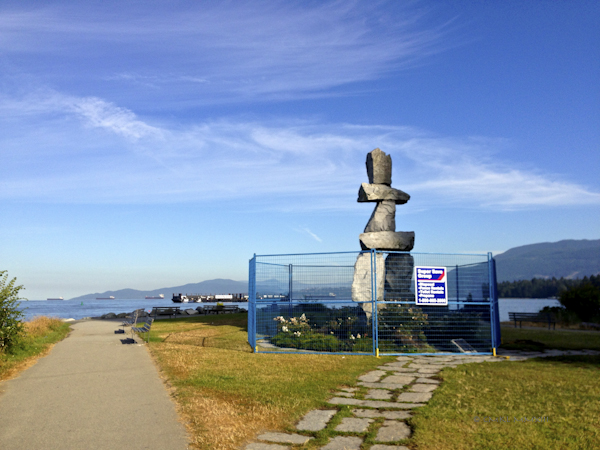 Beaches have been cleaned and untidy log piles were removed in great billowing clouds of sand. Once gently undulating lawns have been transformed into viewing stands and the seawall, beloved by daily walkers and joggers, is now an evacuation route – with the arrow pointing straight in our direction!

Members of the media have arrived, preening in their car’s rearview mirrors, and practicing their lines in front of bored cameramen.

It will be big! The reporter told me that the weekend will start off with a beach concert tonight, followed by daily music events and an air show clustered around the three fireworks shows. And six mega cruise ships are expected as well. We shall do our last sightseeing today and then mostly perambulate in the opposite direction of English Bay. Except for Saturday night, when we’ll walk toward the beach in the hope, to catch a glimpse of the Sparkles in the Sky.