Skip to content
Posted on July 31, 2013September 14, 2018 by CMKL
Greetings from the University of British Columbia, specifically their Museum of Anthropology. I shall dedicate today’s lecture from the MOA to my sister Diana, who is a sculptress in wood and thus has a strong spiritual connection to the craftspeople, ancient and contemporary, represented here. Many of the pieces I saw reminded me in some way of her work, even though her roots and her experiences lay in a different culture on a different continent.
As we shall see later, MOA is a work of art in itself. For now, let us focus on their permanent collections of carvings and other cultural objects of Northwest Coast Nations. The exhibits are shown in the Great Hall a vast, glass-fronted space and in The Ramp a wide, sloping corridor which gradually draws the visitor into the Great Hall. Adjacent to the Great Hall are several Multiversity Galleries or Ways of Knowing spaces. Contrary to the practices of many museums and research facilities, where artifacts are hidden from public view, here we marvel over an incredible richness of cultural expression. In towering glass cases, aisle after well-lit aisle, over 10 000 works of art are displayed for everyone to enjoy and learn. A unique and awe-inspiring experience!
In The Ramp, the entryway leading into the museum, we find artifacts from the Coastal Salish region and Haida pole carvings.

The 3m/10ft cedar boards faced the inside of a winter house for an extended family. House boards often showed mystical creatures or animal, like the fishers here, which were associated in some way with the family and its history.

This rather lengthy Wiki entry about Totem Poles and their meaning is a worthwhile read for anyone interested in NW Pacific indigenous culture. 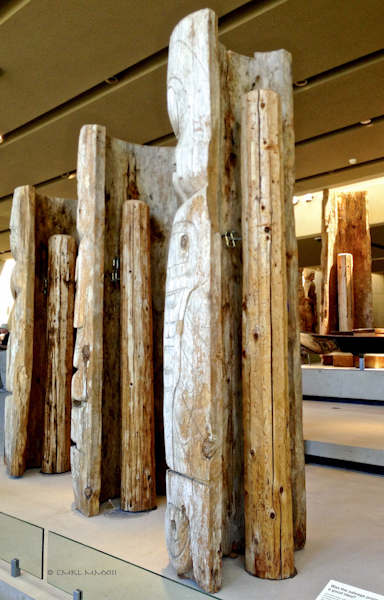 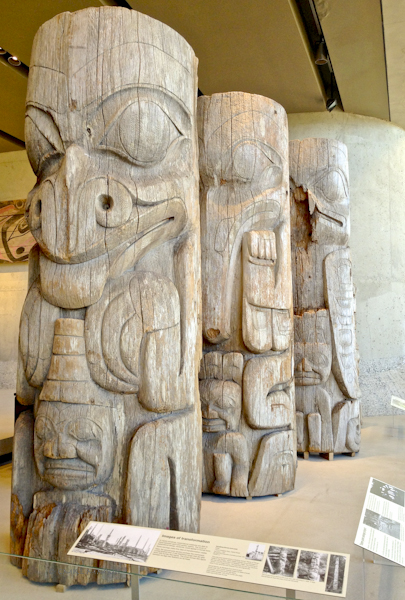 These sections of a cormorant-themed Haida totem pole, c. 1870, once formed a single pole. It is believed that the cormorant beak missing from the segment shown in the rear, was as long as the wing carved at the bird’s side.
As part of UBC, the museum has extensive teaching and research facilities. One of their studies, the Image Recovery Project, has been very successful in restoring some artifacts to their former glory, giving us a much more accurate glimpse of the work as it was originally created. 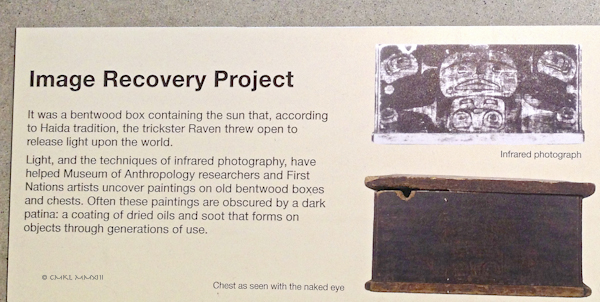 I discovered another piece of image recovery in a more remote hallway. This is a Haisla Nation House-Post fragment showing a bear, quite a blackish bear. But there is a lot of color hidden beneath the soot! 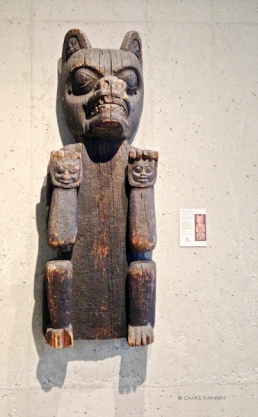 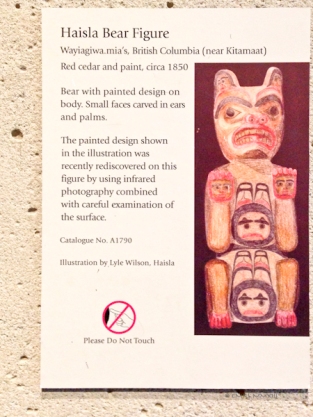 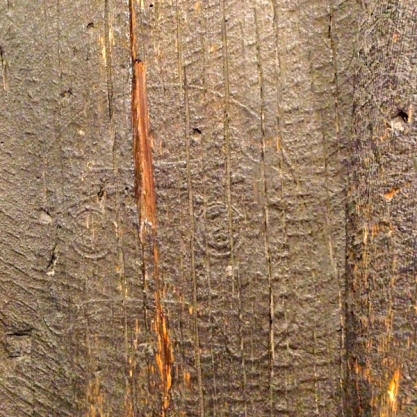 After studying the figure very carefully, I could detect the eye outlines and cheek curves of the faces on the Bear’s belly. Cool!
Now let’s return to those “Bentwood Boxes” mentioned above. 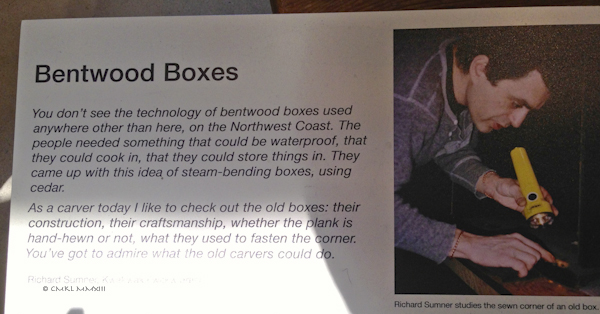 Such an interesting subject and one that is unique to First Nation culture. Bentwood boxes were used to store food, supplies, tools, anything that needed to be tugged away safely. Alternatively, one could cook in them as well. They were used to trade goods, assemble the trousseau for a blushing bride or keep an honored ancestor’s remains. Here’s the Bentwood Box story: 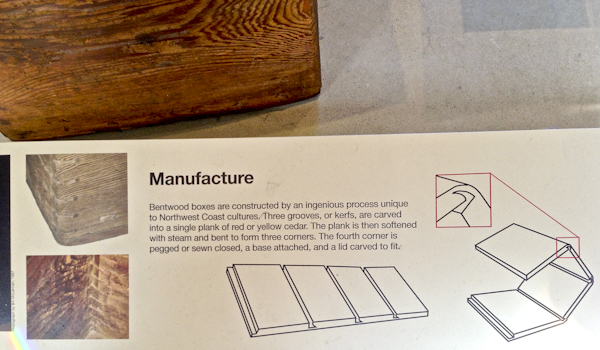 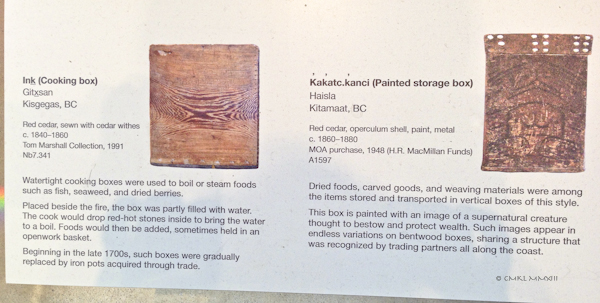 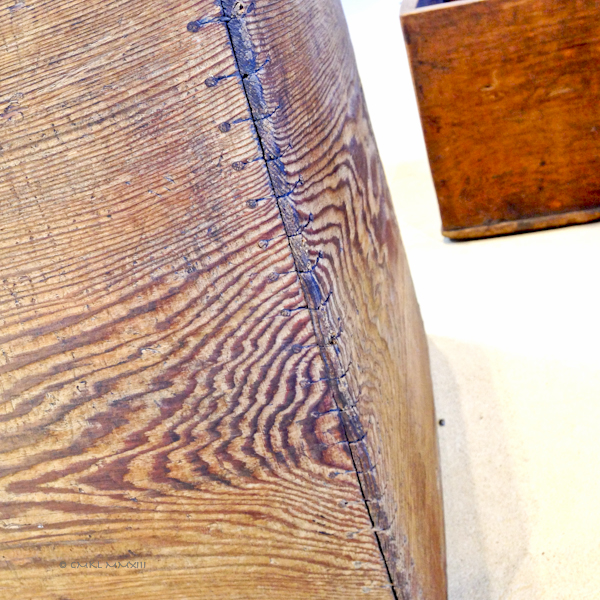 This is one of the university labs, where all that restoration magic happens. 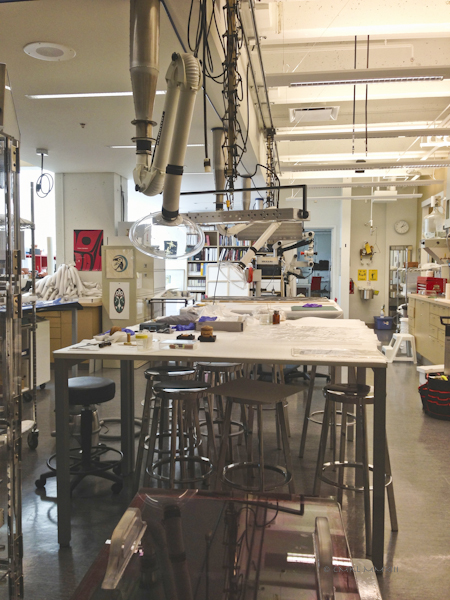 Finally, we shall proceed into the Great Hall with it’s 15m/50ft soaring glass wall, created to give the illusion that the totem poles are erected outside, where they were meant to live. Since the poles are carved from cedar, which decays in the humid coastal rainforests, they have to be housed in a climate controlled environment to preserve them for future generation. The Great Hall is the perfect compromise. It was designed by Arthur Erickson, who had a global reputation as Canada’s most preeminent modernist architect, but who was also not without controversy, especially in regard to the Canadian Embassy building in Washington, D.C. and now, even after his death the trouble aren’t quite over. 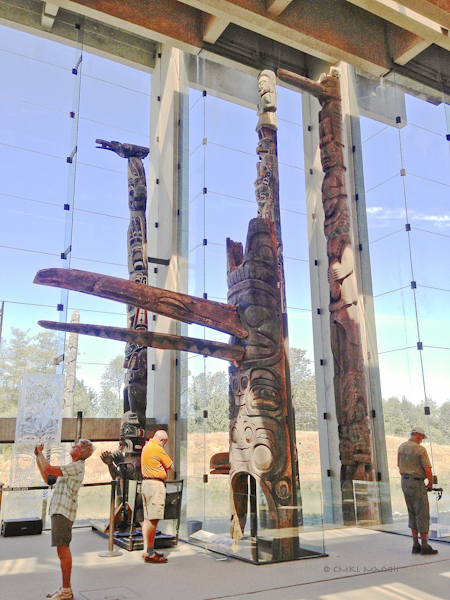 A selection of totem poles in the Great Hall. The Front-House Pole in the center shows the arch which allowed entry into the house. It was designed to be low, so that family members & guests had to bow before the ancestral crests when entering the house – although it was originally a little higher. 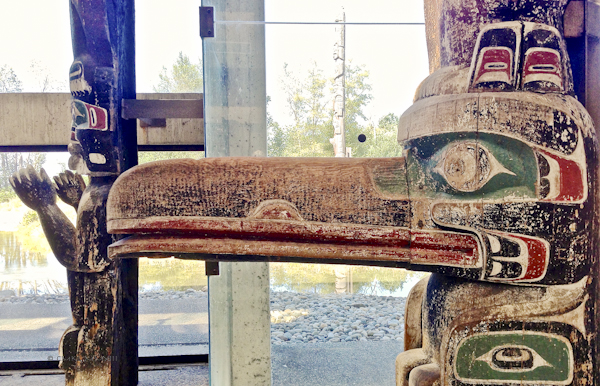 Joe David, Nuu-chah-nulth, carved this Welcome Man to stand in protest in front of the Parliament building in Victoria, BC. Cedar man was used twice in protests against exploitation of natural resources of David’s home island of Meares Island through large corporations. In front of Parliament, he lowered the arms of his Cedar Man to express the tribe’s disapproval.

In this carving, a bear holds an enemy’s head in his paws. On the bear’s chest is a copper, a shield symbolizing power and wealth. To the right of the post and behind it, one can see another low entry arch. 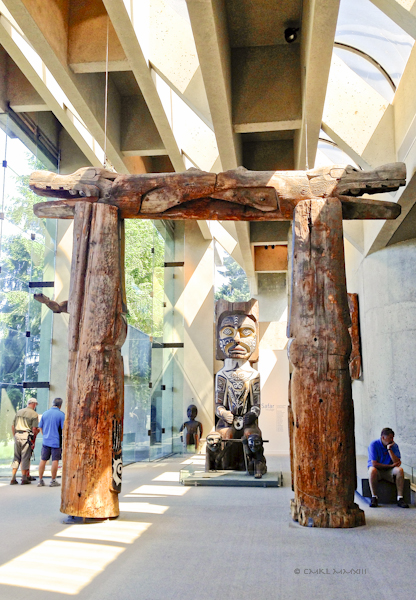 The two uprights in the foreground, are posts which were carved by George Nelson & Quatsino Hansen, Gusgimukw (a subgroup of Kwakwaka’wakw) in 1906 for the Klix’ken (sea lion) House, the last old-style house ever built in Xwatis. The majestic crossbeam represents a supernatural, double-headed sea lion.

In the center between the two sea lion posts, we see another Interior-House Post in the shape of a seated man with killer whale chest decorations & other power symbols. In front of him are two kneeling slaves supporting a bench.

The display area was never free of visitors making it impossible to get a good shot of these intriguing Interior-House Posts. I requested a private tour of the premises but was – for whatever unfathomable reason – flat out refused. “Come back in January,” they said, “no-one here but us chickens. You’d have the Great Hall all to yourself!” 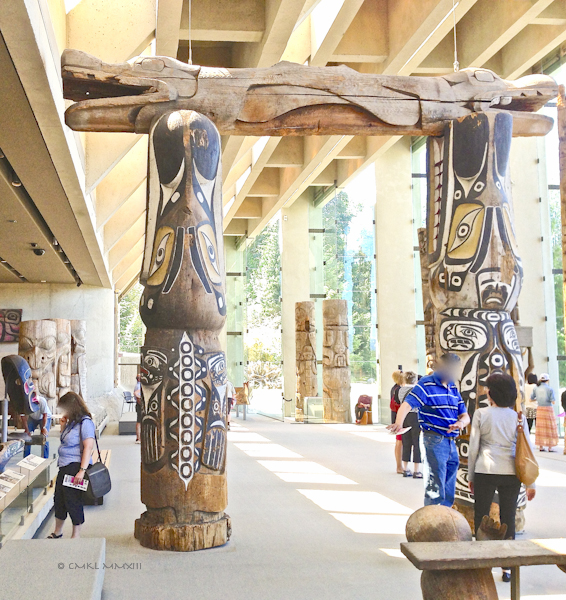 The interior surfaces of the uprights of the Great Sea Lion Gate are painted with sea lions and the Sea Serpent Sisiutl. This house guardian is the most powerful symbol in Kwakwaka’wakw mythology. The Sisiutl is a shape-shifter and it can give warriors invincibility.

After seeing so many power symbols, let’s conclude our visit to the Great Hall with something warm and fuzzy. To celebrate major events in their lives, it was customary for First Nation peoples to invite their near and dear to potlatches. We’re talking about throwing a (sometimes) multi-day party for four hundred (or more) of your relatives, honored & high-ranking guests and friends. Contrary to the custom of non-First Nation peoples, where a ‘potluck’ dinner means that the guests bring food, drink and maybe a little hostess gift, during an actual potlatch the host provides everything, including gifts for his or her guests.

Giving away possessions is the purpose of a potlatch. This may be a gesture of affirmation of a family’s rank within the community to please the ancestor’s spirits, or i So it’s not really a matter of feeding a rowdy bunch of revelers, a potlatch is a celebration, which adheres to very strict rules, customs and traditions. Dances & other spiritual ceremonies will be performed to recall family history and its standing in society. A totem pole may be raised for the same purpose. Hierarchy played and still plays a large role in indigenous societies. Respected elders and other accomplished members of a group must be accorded the proper reverence, including the appropriate greeting and place at the potlatch.

Even though the ritual itself differs throughout the nations in which potlatches are a tradition, the main purpose of the celebration is an affirmation of the host’s rank within his group. A potlach serves as an occasion to redistribute wealth within a clan, village or tribe, and the host is the giver of such riches. Only a successful member of society can afford to host a feast and to give away so much.

It may take a year to plan and execute all facets of a potlatch, but equally, a good potlatch will remain forever in the tribal memory and it will be told and re-told for generations to come, enriching the host family’s reputation.

Because the very idea of giving away one’s possessions was such an alien concept to the Christian (!) conquerors of North America that they promptly passed laws, both in Canada and the US, to make potlatching a criminal act for which host and guests could go to prison. It was believed that such outlandish behavior might prevent a proper Christianization or at least civilization of the heathens. Since under-educated and narrow-minded Christian missionaries erroneously believed that the Natives worshipped totem poles as their Gods, those were outlawed also. Many poles were burned and as many indigenous practices as possible were suppressed.

Oh sorry, we were aiming for warm and fuzzy … let’s get to the food part of potlatching. Huge amounts of Bouillabaisse require large pots, right? Well, those pots were large indeed! Here is a serving ‘canoe’ with a sweet smile:

It is impossible to describe the wealth of artworks in the Ways of Knowing galleries. I picked two carvings to give you a tiny taste. An amuse-gueule of beauty, you might say. One sample piece is also a feast dish, albeit much smaller than our beaver boat. Sadly, the glass case and the tight arrangement of artifacts wouldn’t allow me to show you a proper picture of the remarkable eagle carving that captured my eye. 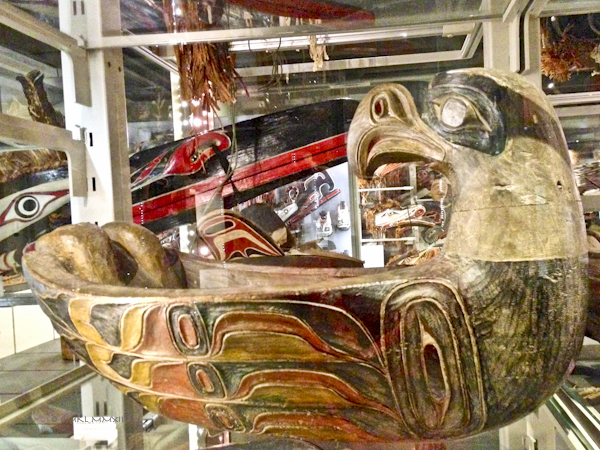 The other carving is a Chief’s Headdress in the shape of his family crest, the loon. 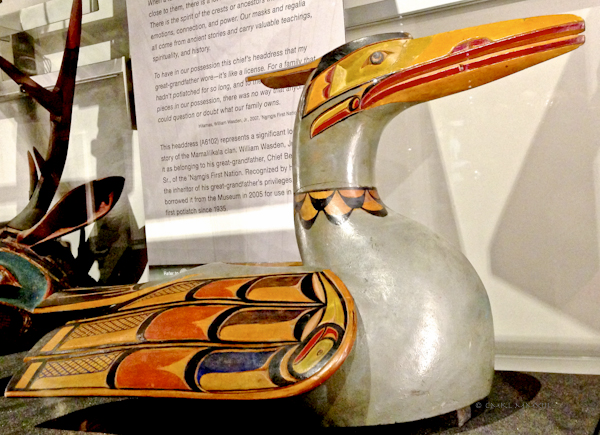 The carving itself, though beautiful, may not be all that remarkable. What made me catch my breath is the note accompanying this piece. In just a couple of paragraphs, a bitter past is illuminated. 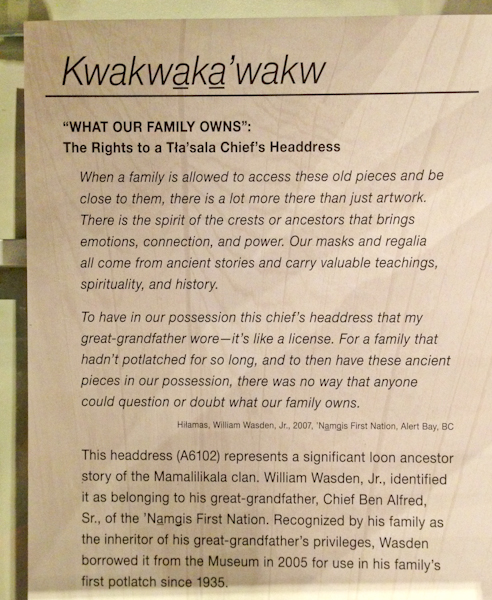 What is left to tell? Yes, the architecture of the museum itself, as it relates to tradition and its surrounding spaces. Since the details of the building are mentioned in the MOA website, we shall only compare the building style to its Haida neighbor and note the astounding similarity.

Let me conclude our visit to MOA with an image of a Mortuary Totem Pole carved by the outstanding contemporary artists Bill Reid, Haida, and Doug Cranmer, ‘Namgis, in 1961. We visited the Bill Reid museum in downtown Vancouver early in our stay, so this closes a circle.

P.S. If you feel like a virtual visit to MOA, browse the online catalog. It’s a little exasperating to use, but a worthwhile effort once you get the hang of it 🙂

4 thoughts on “Of Masks and Mythologies”