Skip to content
Posted on November 1, 2013September 27, 2018 by CMKL
Easily sustaining my righteous indignation regarding a certain norteamericano’s unopposed badmouthing [see my previous post] of our local farmers through today, Friday, el Día de la Feria de los Agricultores, I marched off to the market early on this gloriously sunny morning.

Parking is never a problem if you make it to the market around seven in the morning and I was able to squeeze my car in a convenient spot just across the street from the double line of stalls.
Since I only had ¢10 000 bills, which are the equivalent of $20 bills, I decided to start my shopping at the very center of the market, where the stands for the high-end merchandise cluster: fishmonger, chicken monger, sausage monger, and the cute yogurt guy. Understandably the farmers usually don’t much like to hand over change for large bills, but at these stands, you need more than coins!
First I conferred with the fishmonger, who concurred that Camarones, shrimp, were awfully costly this week. Even though he had some beautiful looking gambas, prawn, they were definitely too expensive and I bought Dorado instead. When you buy Dorado or Mahi Mahi, as it’s also called, or other large deep ocean swimmers, you have to make sure to only purchase fish that has been caught through pole & line fishing, which has no bycatch casualties, or through trolling, where bycatch is kept to a minimum. Always avoid fish that have been caught by long-line fishing practices. Long-lining is a more cost-effective fishing method, but it also kills sea turtles, seabirds, sharks and other creatures, together called bycatch, which is attracted to the lures. Long-lining is against the law in Costa Rica, but it’s nevertheless still practiced. Should you ever be in doubt about which fish to eat, check with the Seafood Watch of the Monterey Bay Aquarium, an invaluable resource for sustainable living.
I stored my little fish package in a cooler, where it was soon joined by a plump, skinless, boneless chicken breast, purchased at the neighboring stand. My last high-ticket item were sausages. As I mentioned before [here], we have this awesome sausage guy, Don Marcial, at the feria and I needed to stock up. This morning I bought both ‘Italiano’ and ‘Ranchero’ sausages. The Italianos are similar to your Johnsonville sweet Italian sausages from Wisconsin, while the Rancheros start with subtle flavors of sage & rosemary, ending with a kick. He sells them frozen, so you can just toss them in your freezer and have something handy at short notice. Ah, I almost forgot, I also bought a liter of natural yogurt, ‘natural’ meaning no added anything, period.
The remaining purchases were all fruits and vegetables, including three kilos (6.6 US pounds) of tomatoes for the last batch of salsa de tomato before we go back to Texas. All that stuff started to add up in the weight department and I was glad, I had found that close-by parking space!
Now let us proceed with an evaluation of the alleged price gouging.
And here we have the product display: 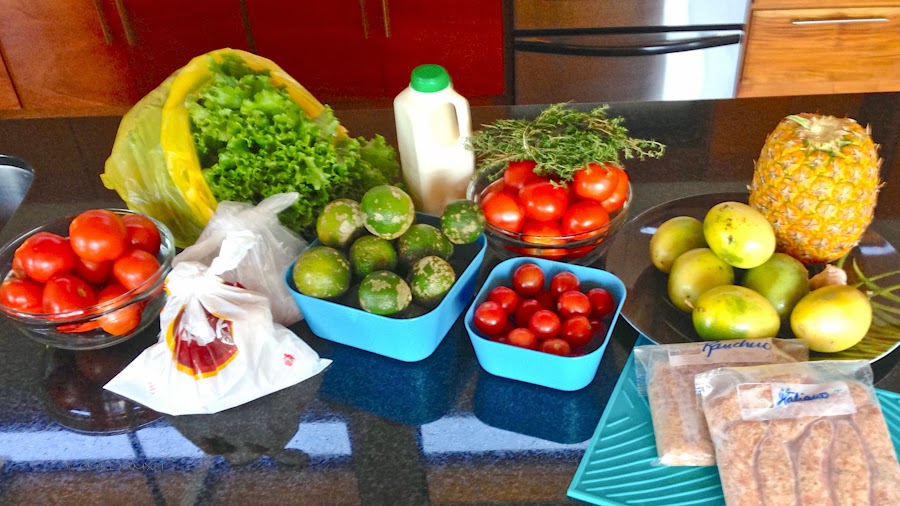 630gr/22oz skinless/boneless chicken breast ¢2300/$4.56
740gr/26oz Mahi Mahi fish fillets ¢2200/$4.36
516gr/18oz Italiano pork sausage ¢3000/$5.95
490gr/17oz Ranchero pork sausage ¢3000/$5.95
1l/33floz yogurt ¢1000/$1.98
That comes to a total of a little over $20 for ‘meats’, which will be enough for at least six or seven dinners for the two of us, plus enough yogurt for my breakfasts for the next week. Seems fair to me.
The large pineapple was 99 cents, the three kilos of tomatoes cost me ¢1000 or $1.98, plus another $1.20 per kilo for the little baby tomatoes. I remember seeing a pint basket of cherry tomatoes at HEB in Kerrville for $3.98, which would be more than double our cost here. The whole pile of mandarina limones, our sweet-tart limes you see in the picture, was another 99 cents and I had to pay yet a further 99 cents for the hand full of fresh Thyme from our herb guy, who doubles as a health consultant.
On the downside, at a different vendor than where I customarily shop, I had to pay 20 cents more per kilo for my maracuyas today, my beloved passion fruit. My regular maracuyá lady accidentally left her harvest behind at the farm. She was really embarrassed and we joked and laughed about her mistake. She agreed with me that her maracuyas should be at my house, rather than hers (that’s the extent of my clumsy joking abilities in Spanish). And while I was standing there and making mild fun of her forgetfulness, I could really feel her anti-gringa animosity radiating toward me through her fake laughter. Oh yes, she is a brilliant actress!!! But at least she sells her maracuyá cheaply, for $1.60 per kilo – even to foreigners 😜
My last purchase today were the two heads of lettuce, which cost ¢300 each. That’s 59 cents per head. I have to confess, though, that lettuce in Costa Rica rarely lives up to expectations. There’s a reason why Ticos customarily eat coleslaw and call it ‘ensalada’. Cabbage is always fresh, flavorful and crunchy, whereas lettuces here remind me more of shredded cardboard and I freely admit, I use them mainly as an almost calorie-free stomach filler.
The result of this scientific exercise clearly demonstrates that gringo gouging at the feria could not be verified, at least not by this gringa. Who, by the way, was shopping the other day at an upscale supermarket chain where I selected a pre-packaged unit of tomatoes. To my surprise, the produce attendant snatched the box from my cart and took it to the nearest scale. Before I could even ask, he showed me that the scale was reading slightly more than one kilo. He explained that there seemed to be an empty space in the box, where a tomato should be and he wanted to make sure, I wasn’t shortchanged. Cool, eh? And, does your chicken monger give you a, hygienically wrapped & sealed, piece of candy with your change? Mine does.