Skip to content
Posted on November 2, 2013September 27, 2018 by CMKL
Have you ever seen a Riefenschnabelani? Neither had I.
It was just after seven o’clock this morning and we were lounging comfortably, freshly brewed coffee within reach, watching the qualifying for the F1 GP of Abu Dhabi on TV. During the lull between sessions, my gaze followed some swift movement outside. In the guarumo tree past the casita, I saw several black birds moving about. Big deal. Grackles most likely. But wait, their outline – all I could really see from the living room – seemed different.
Interest peaked, race cars forgotten, I trotted, carefully keeping out of sight of the birds, around the back of the house, snuck in the casita and grabbed my camera. The zoom was already mounted, offering a chance to record some markings to allow identification later. With the naked eye, the black birds against the bright sky were nothing more than silhouettes, Scherenschnitte. Unfortunately, I could neither use a tripod nor move in a more advantageous position, lest I scare them off. There were five or six busy birds in the tree, but only one was fully visible.

Sure enough, these birds were neither grackles nor crows, blackbirds or cowbirds! They were ani, one of a variety of tropical cuckoos. They’re pretty big, about 12″/30cm or more, with long tails, entirely black from head to toe and possessors of rather odd looking beaks. This gives them the unusual outline, which intrigued me from afar.

According to our field guide, anis are quite common, but we never saw them before. A great early morning surprise visit! 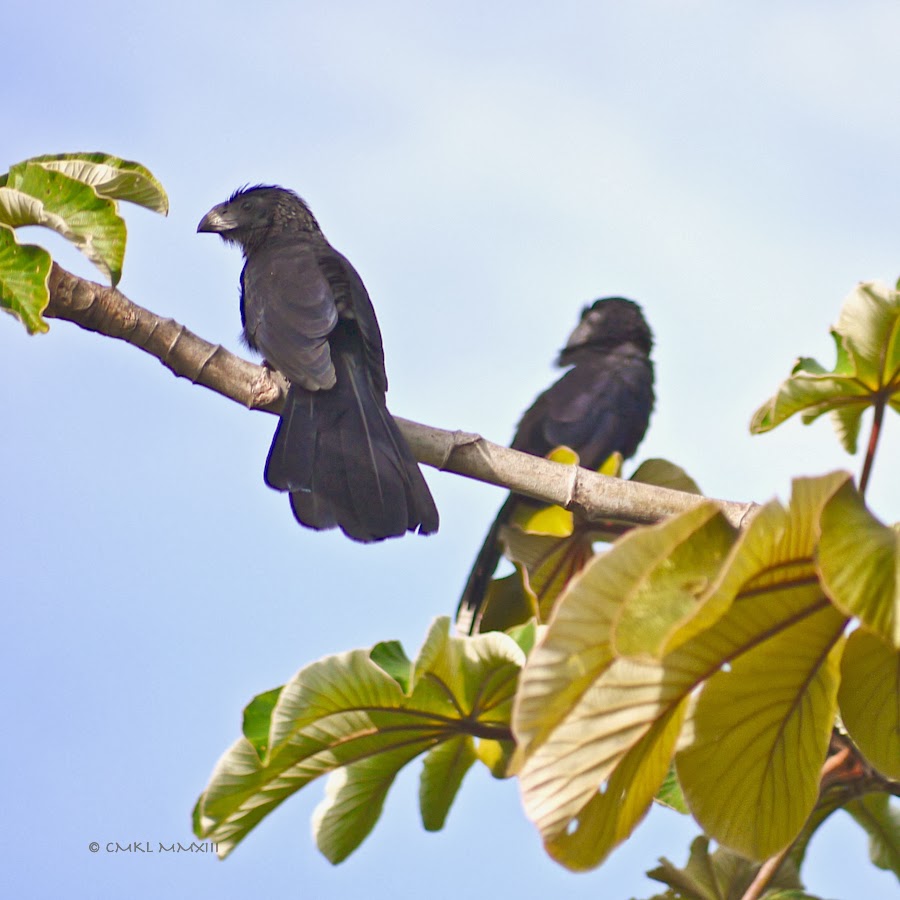 Anis have a number of Spanish names, from Castilian to Mexican. Garrapatero asurcado, anó pico surcado, matacaballo, and pijuíl or pijul to name but a few. The name ‘pijul’ reflects the ani song, a rapid pi-jú pi-jú pi-jú, which sounds very pretty. Anis are fairly poor flyers because their rounded wings are quite short relative to their body- and tail-length. One remarkable ani feature is their communal chick rearing behavior, they are the ultimate hippies. Several breeding pairs lay their eggs in a common nest and everyone is involved in incubating the eggs and caring for their chicks.