Skip to content
Posted on March 15, 2014October 30, 2016 by CMKL
Shortly after we arrived in France, I purchased a SIM card for my phone from one of the French providers. I bought a prepaid monthly deal, which allows unlimited call within France, and unlimited texting, and it includes 1 GB of internet access. The gigs are a very important part of using a smartphone, at least for us. It provides access to GPS software like google maps or Waze, to find our way around in an unknown country. And I can use WhatsApp to text globally.
Naturally, monthly contracts must be renewed once a month. But how does one purchase another allotment of cyber access? I was told to just call a certain number and pay with my bank card and follow instructions … easy as pie – if you have the faintest idea, what you’re doing, which I most certainly do not. Adopting a Scarlett O’Hara attitude, I postponed dealing with my phone conundrum day after day, until I received a text this morning, telling me that I had exceeded the limit of my service. Oops.
Still not confident of my phone comprehension prowess, I had no choice but to go and wait in line at the always super busy phone office. It was embarrassing to ask for help for such a simple procedure, but fortunately, the young woman behind the desk hesitated only briefly with one eyebrow raised behind her dark rimmed glasses, before kindly taking the phone from my trembling, grandmotherly hands, completing the transaction for me.
On my way home, I stepped through the wide open doorway of the municipal library into an enchanting courtyard. It was really more a back door to a building complex, now used by the municipality, which fills an entire city block. Part of the structure goes back to a Dominican Monastery, the ‘Couvent des Jacobins’, founded in 1292. It included a church, a chapel, the chapter house and an assortment of other structures surrounding several courtyards and cloisters. The original buildings suffered great damage during the Hundred Years’ War and had to be rebuilt in the fifteenth century. By the early seventeen hundreds the monastery had fallen into disrepair again, now housing only ten monks. During the Revolution, the religious buildings were desecrated in 1792 and sold as state-owned property. The former Couvent des Jacobins had many uses, till the whole shebang was purchased in the middle of the nineteenth century by a wealthy merchant from the nearby town of Cognac. This man of Arts and Letters, Maurice Martineau, was determined to turn his new property in an estate worthy of his standing and esthetics. He pulled down (!) large parts of the medieval structures to make room for an ‘Hôtel Particulier’, a splendid townhouse, outfitted after the latest fashion in the Art Nouveau style. He hired many artists and artisans, among them the Parisian master glassmaker Marcel Delon, who created a series of windows for the Hôtel Martineau.
I didn’t know any of this, though, when I entered the courtyard through the open doors of a huge, arched porte-couchère. The courtyard was magically filled with music from an unseen source and when I turned around, I looked at this window.

Its glass panes appeared shiny, yet irregular and strangely colorful. They reflected the large, as yet bare-branched tree in the center of the court and the buildings opposite in the quadrangle, but they also showed some design on the polished, mullioned glass pieces. Eventually, it became clear to me that the whole window was painted on the inside. 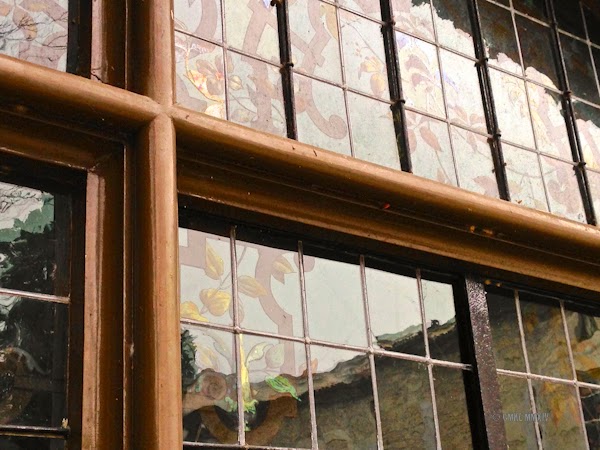 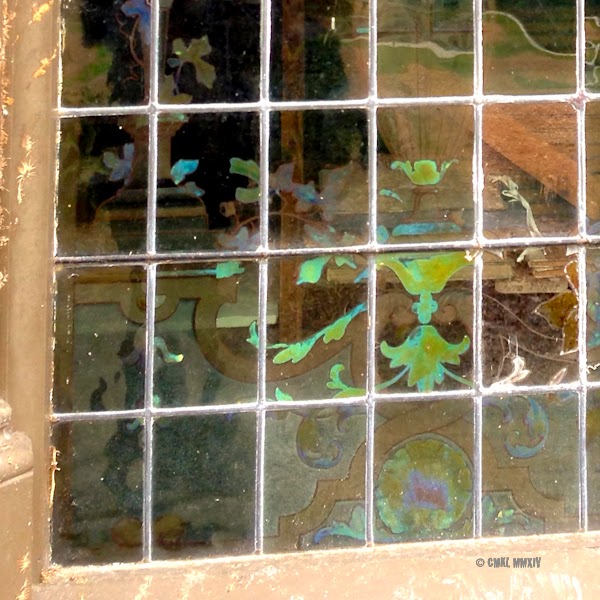 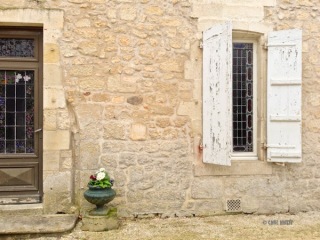 It was difficult to see the paintings clearly, but even from the outside, the faint images were charming and mesmerizing.
As were other glimpses of former grandeur around the gardens.
Before leaving, I took a couple of pictures of the imposing entryway, its beautiful woodwork and lovely mosaic floor. 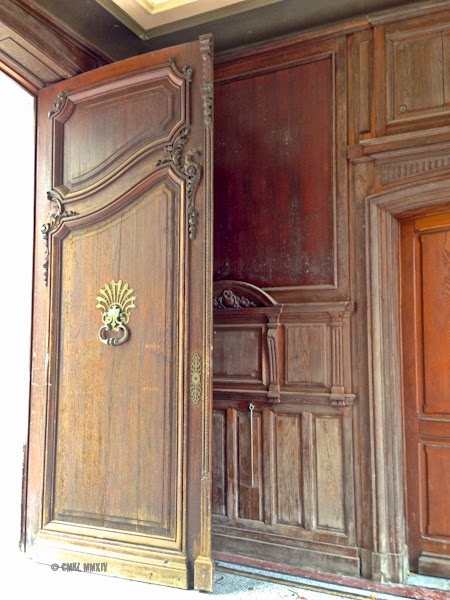 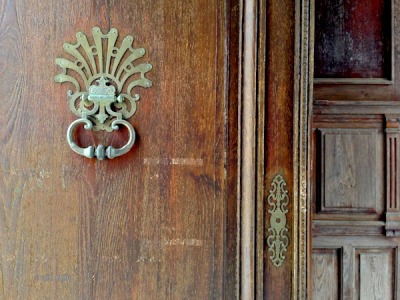 P.S. You might recognize the threshold as the signature image for my travel blog!

2 thoughts on “Gigabites and Libraries”