Glancing across the pool, I noticed this brown thing attached to the concrete rim. It looked like a dried up base of a palm frond and I paid it no further attention till the middle of the afternoon when it just seemed too odd to still be there. Shooting a couple of pictures across the pool’s width, the camera helped to identify it as a moth, a rather large one.

I wouldn’t dare balance along the far edge of the pool, as it goes pretty much straight down behind it. Besides, what would I do then? Instead, I put on my modest bathing attire to cross the red sea to the Lepidoptera clinging precariously above a watery grave. The generous cut of my swimsuit is not actually related to modesty, rather than the need to protect my UV sensitive skin with a long-sleeved swim shirt and surfing bermudas when I do my laps. Since our property is quite private, I wish I could forgo the total body cover, as swimming in a burqa is not comfortable, trust me, but the itchy welts in the evening would be far worse.
Thus geared up, I advanced on the moth for further examination. I had no idea if the animal was alive since it had been clinging there motionless for at least nine hours, possibly much longer. I remembered noticing something very large briefly fluttering outside the windows the previous night. If that was the moth, it might have been glued to the pool edge for close to 18 hours. 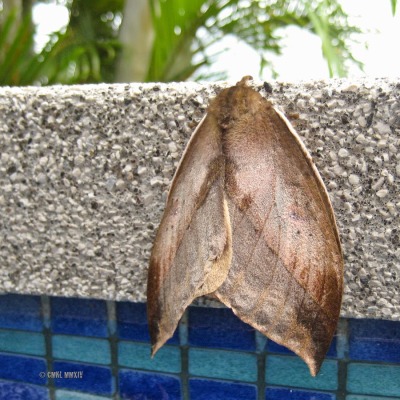 As you can see quite clearly here, these predominantly night-active moths in the Saturniidae family very cleverly present a cryptic dead leaf or tree bark pattern to fool their predators as they dream the days away.

But if they feel threatened, they quickly spread their forewings to expose scary owl eyespots on top of their hind wings. As happened, when I poked her gently. But it was a very weak gesture, so I offered my finger and she laboriously climbed aboard. 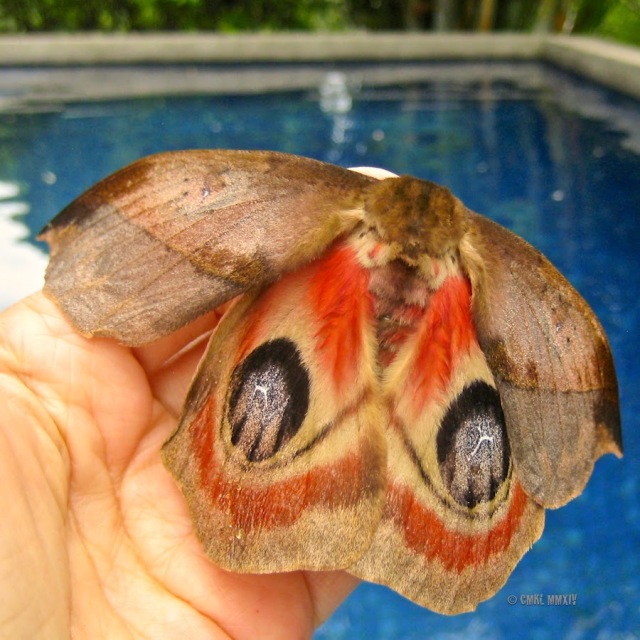 Although she was spreading her wings a little for balance, she never attempted to fly off. Together we waded back and climbed out of the pool to find a safer spot for her. Along the way, a gust of wind exposed the underside of the wings and a sturdy abdomen. 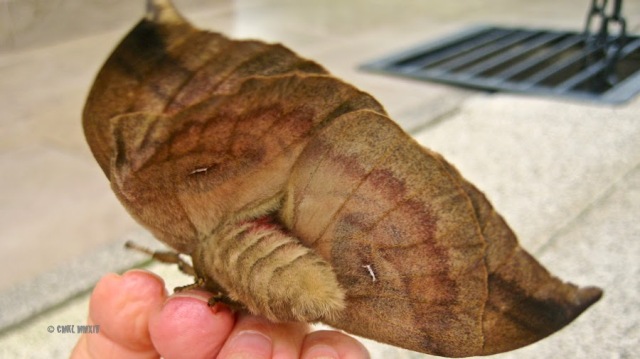 I selected a low philodendron sheltered beneath some taller palms for her to rest a while, relatively safe from keen-eyed birds and iguanas. I had a difficult time to get her to move over on those nice leaves. Moth footsies can cling like Velcro! 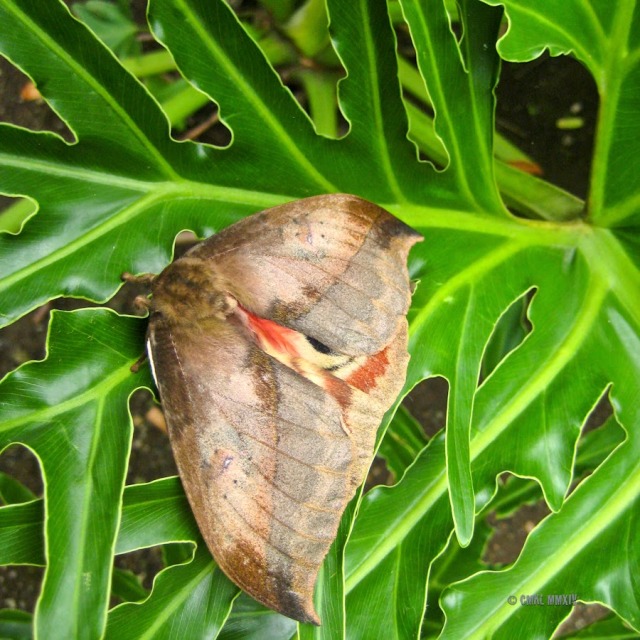 I don’t like to see critters drown in the pool, yet I wouldn’t consider this a rescue operation. Saturniidae imagines, the adult stage of the silk moth, only live a few days. Not being equipped with a digestive system, they don’t waste time in search of tasty meals. They live off stored fat during the brief time needed to reproduce. When the female emerges from her pupal cocoon, she’s already fully equipped with mature eggs. She doesn’t waste much energy flying around either, instead, she sends out pheromones to signal the males, where to find her. All that’s left to do is mating and laying the fertilized eggs in an advantageous location to begin a new life cycle.

The big lady I found at the pool might have been an Automeris metzli, but I’m just guessing. There are so many genera and they also come in such a variety of polymorphs, I’m never sure. You don’t see these very large ones all that often, but we found a gigantic female Eacles imperialis in the house once, I bet she was more than 4 inches across. 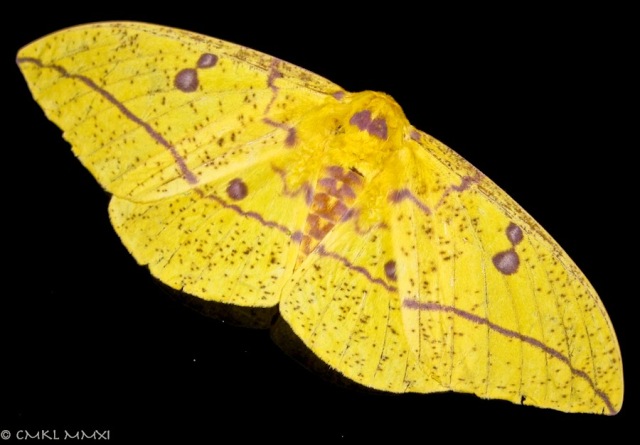 There is one aspect of the Saturniidae moths worth mentioning with a caveat: do not touch the caterpillars of the Hemileucinae subfamily! These beautiful creatures are equipped with quite unpleasant ‘urticating hairs’ stingers. Many species have setae, hollow spines, and their bases are connected to miniature bladders filled with toxin. Each individual potion is minute, but if you happen to break off several stingers, you might get a nasty accumulative effect.

In southern Brazil, one particular caterpillar, Lonomia obliqua, managed to upgrade its toxicity with an anti-clotting agent. Local farmers are especially affected through accidentally coming in contact with clusters of caterpillars while they work in the fields, absorbing enough toxin to even precipitate death.