Switching between Othernesses isn’t as easy as you might think. I shall expound on the Otherness theme later one. Presently we need to focus on birds, if for no other reason than to seamlessly join my varying Selves through the observation of birds.

Since these will be my last tropical bird pictures for this year, I’ll bombard you one more time with just that, birds, birds and some more birds. The pictures were captured in and around the guarumo tree, which leans so precariously over the precipice out back, during our last week back home in Atenas, before we traveled back home to Saintes. They shall be my opening images in a circle of birds from Costa Rica to France.

First in this picture line-up will have to be our ever-present Squawkero, officially known as Great kiskadee or Great tyrant flycatcher (Pitangus sulphuratus), our most frequent visitor around the pool, his main hunting ground. But he and his family also enjoy hanging out in the branches of a dead old tree right next to the guarumo. 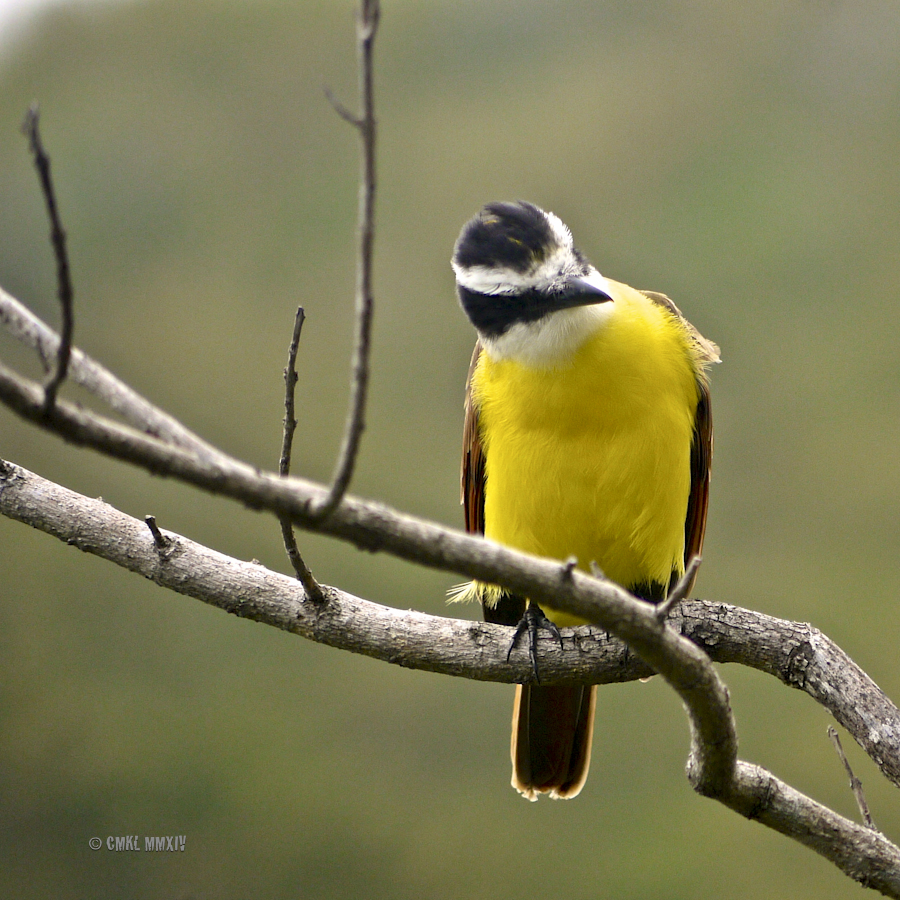 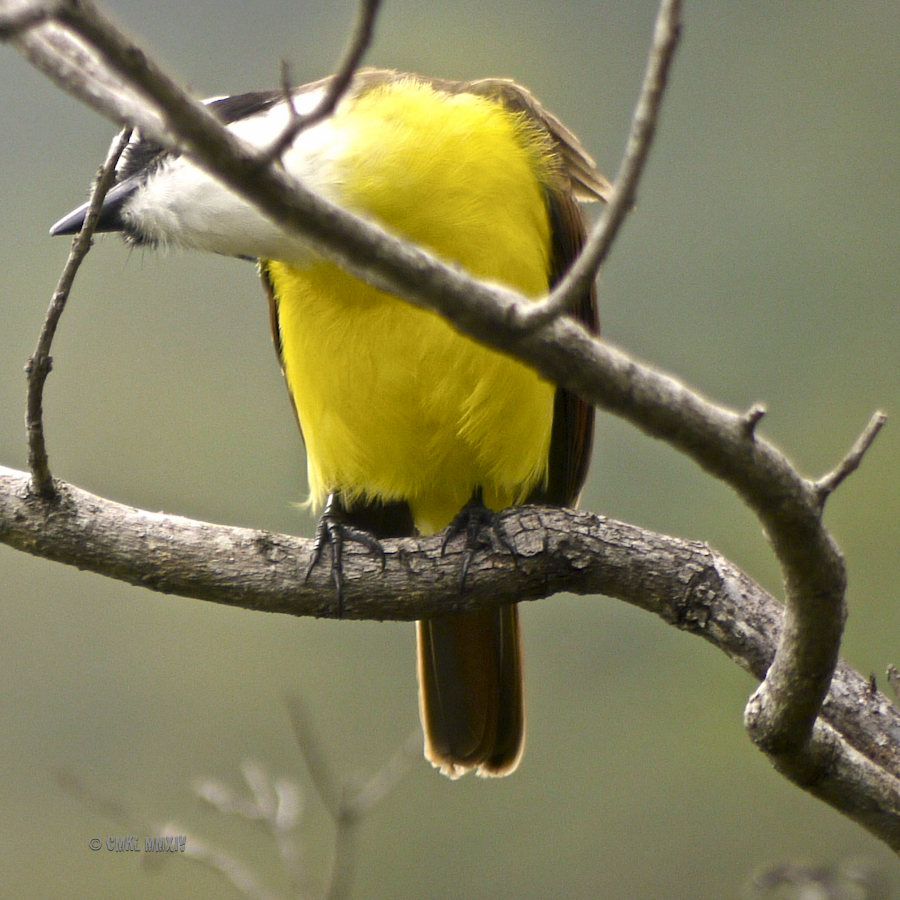 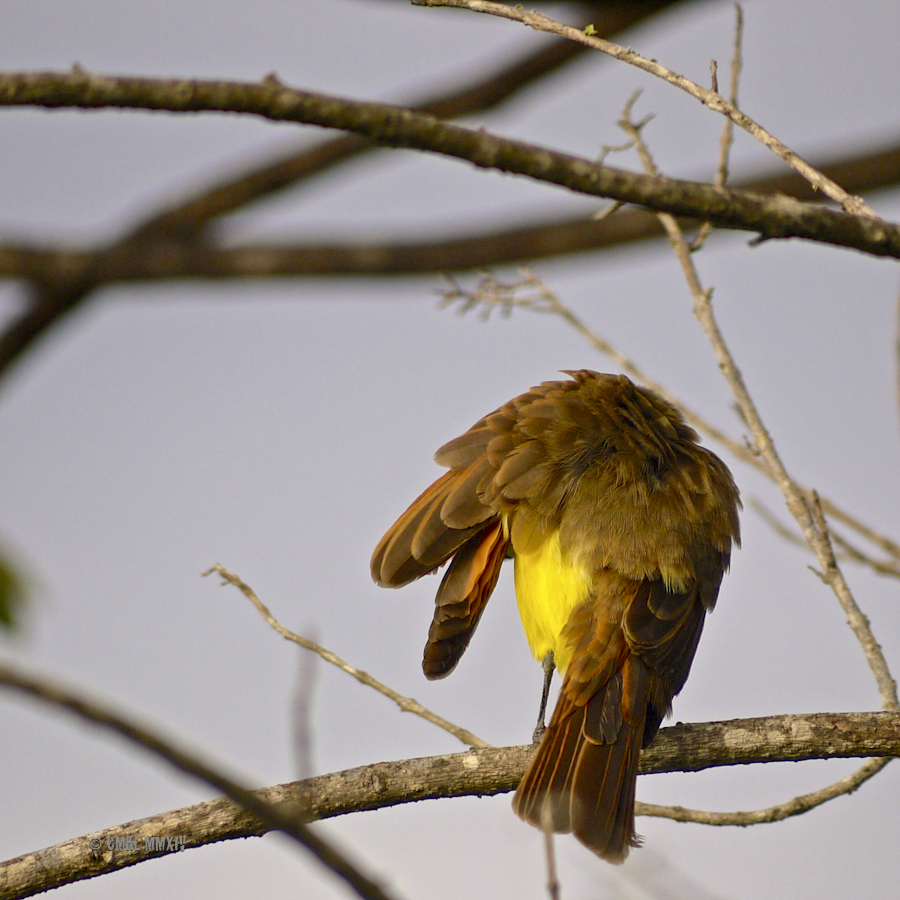 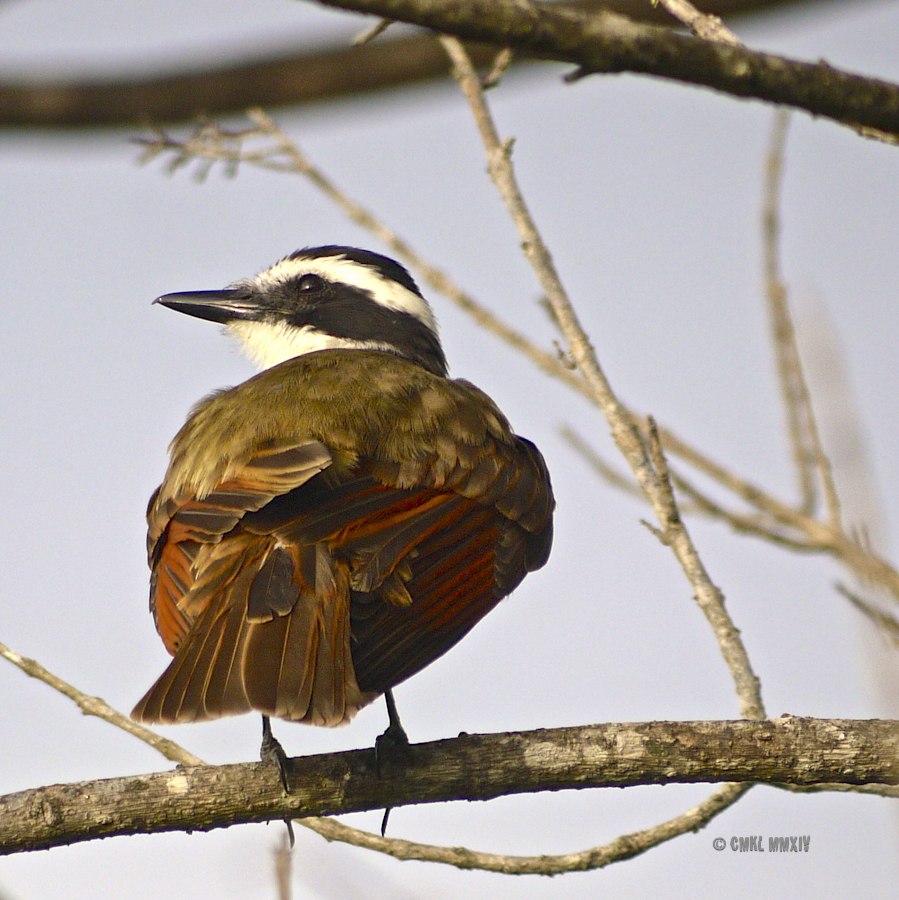 Next in line is our faithful Hoffmann’s woodpecker (Melanerpes hoffmannii). He and the missus come by unfailingly on the dot one hour after sunrise and one hour before sunset. I’ve taken to setting my watch by them. 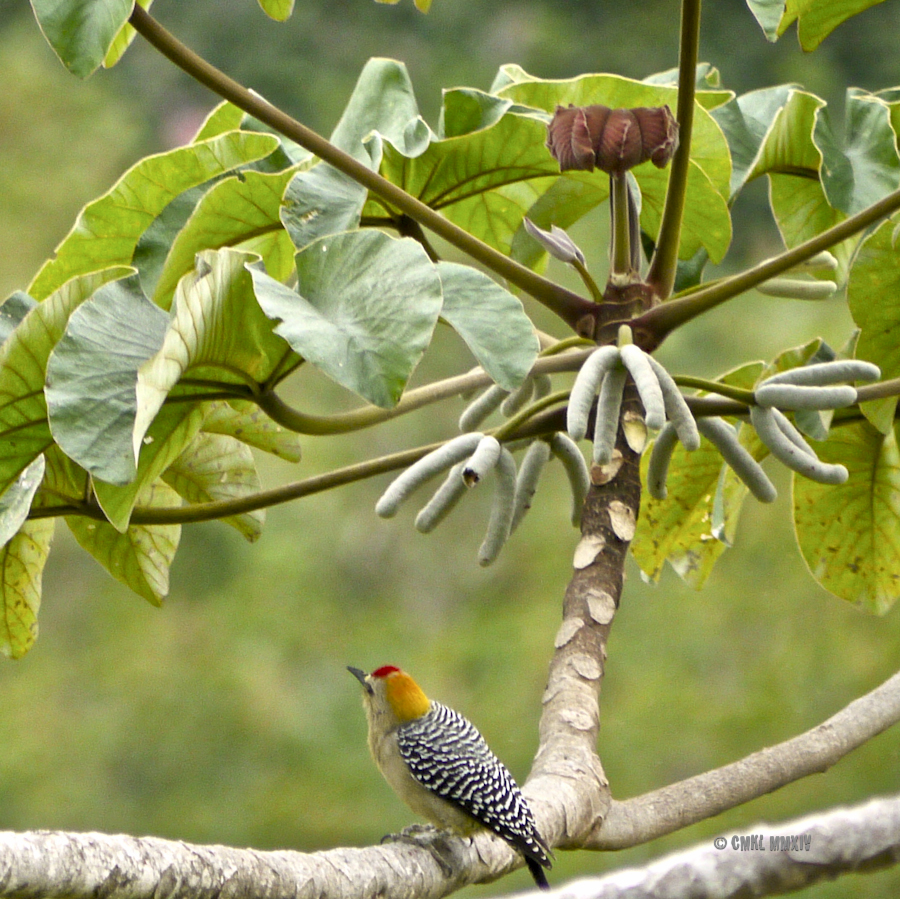 Look at those big feet! Recently another pair of big footed birds came by. Strictly speaking not in the guarumo, but in the old, dying Guanacasta across the street, but a tree is a tree and both start with a ‘G’.

At first a noticed this really loud jack hammer sound, which wouldn’t quit. It took a while, but gradually it dawned on me. Woodpecker! Mental agility does diminish with advancing age, you know. I finally discovered the pair, as they were working their way up, way up, the old tree. Taken against the bright sky, the photos rendered mostly Scherenschnitte, until the birds flew over to another guanacaste, where one of them turned decidedly technicolor: Red-crested lineated woodpecker (Dryocopus lineatus).

To top those crested and lineated dudes, you have to bring on the big guns. This trees full of Montezuma oropendula (Psarocolius montezuma), or as Barry calls them, the Montessori archepelagos (not to be confused with Alexandr’s Gulag), should do the trick very nicely. 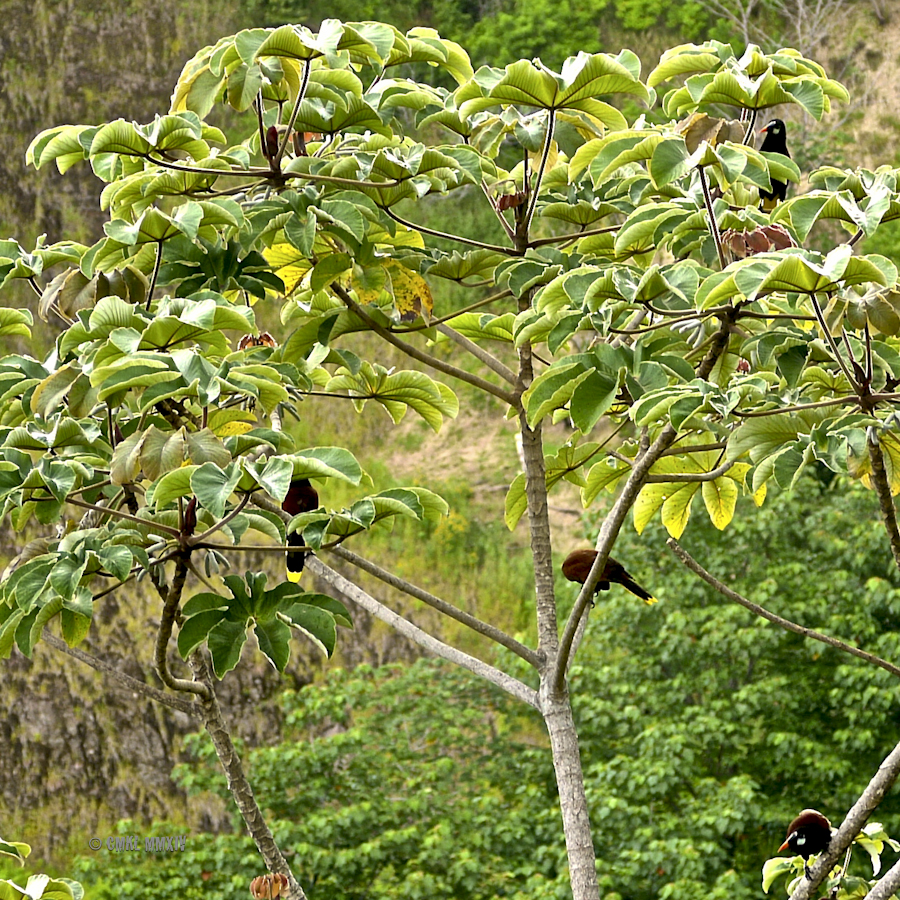 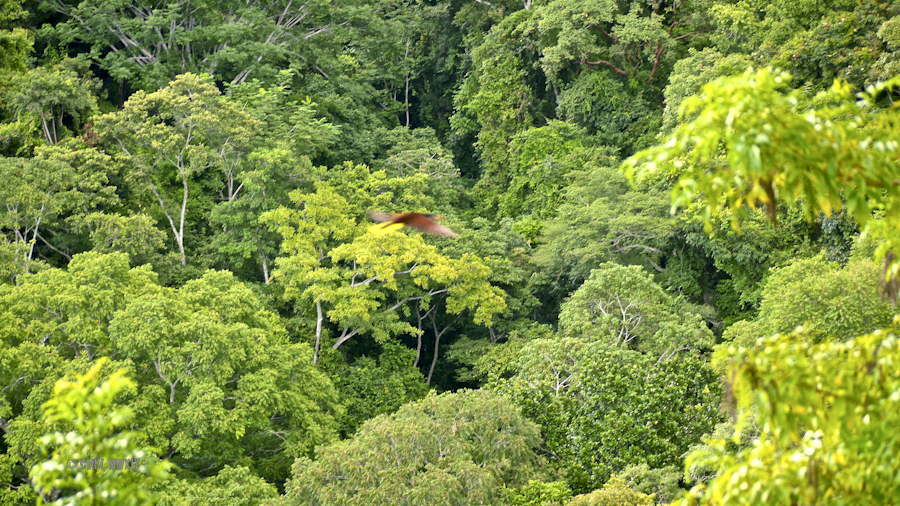 Before we leave Montezuma’s birds, follow me around the house to the front for one more shot, ok? We have this totally crazy tree in front of the house. It’s a Yellow jacaranda, or Tower tree or Brazilian Fern tree. In Costa Rica they’re called el gallinazo, because the roots run close to the surface, looking like chicken feet. When we bought the house in 2010 it was a tiny treelet, now it towers [sic] over the house.

Often flocks of juvenile oropendulas play noisily in our chicken tree for a while, but recently a mature male spent a good hour in the crown bowing and calling. Shooting pretty much blindly upward, I got lucky. It’s one of my favorite oropendula pics. I just love that lipstick red tip of his beak in the saturated green foilage. 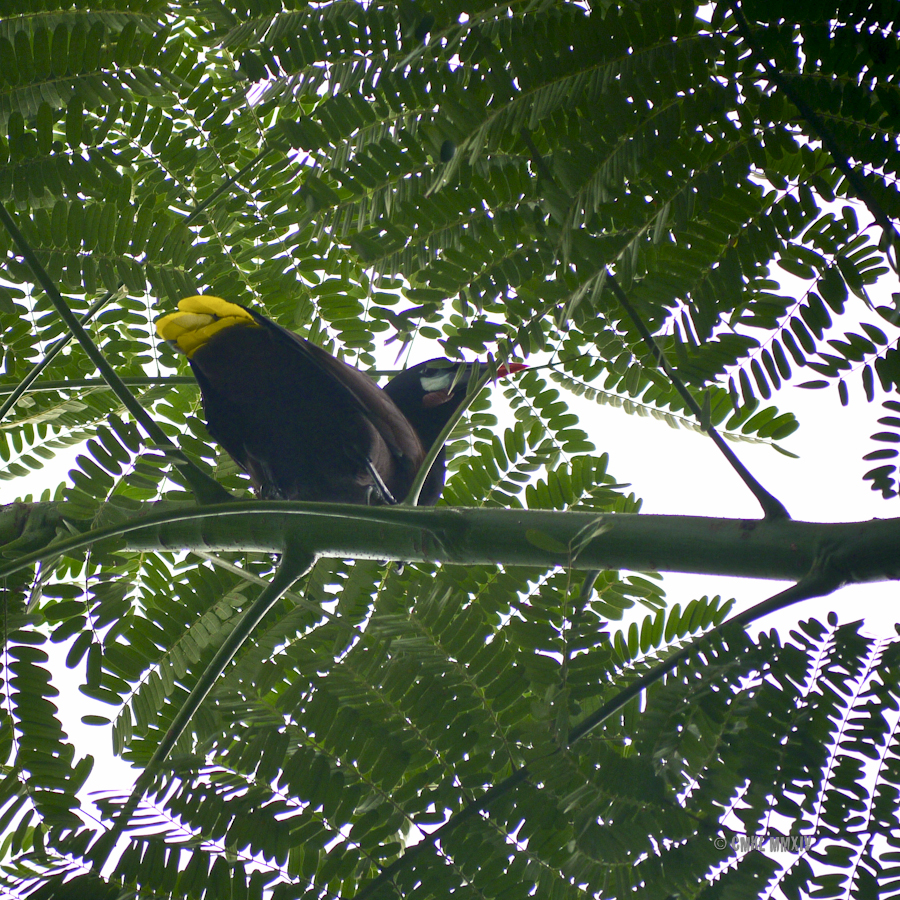 The Oscar award for loudest flyby will have to go to the Orange-chinned parakeets (Brotogeris jugularis) or catalnica. These are the loudest flying critters you’ve ever heard. When a small flock descended on my guarumo, I certainly took notice. Two or three dozen seemed to roam the tree, harvesting fruit and chatting away. I suppose, there were really less than a dozen birds, but their chatter filled the air with a vengeance. However, before we delight in the noisy parakeets, let’s have a quick look at three species, which I hadn’t noticed around before.

This is a male Masked tityra (Tityra semifasciata), a stuning black and white Passeriformes bird. Certainly a new bird for me! 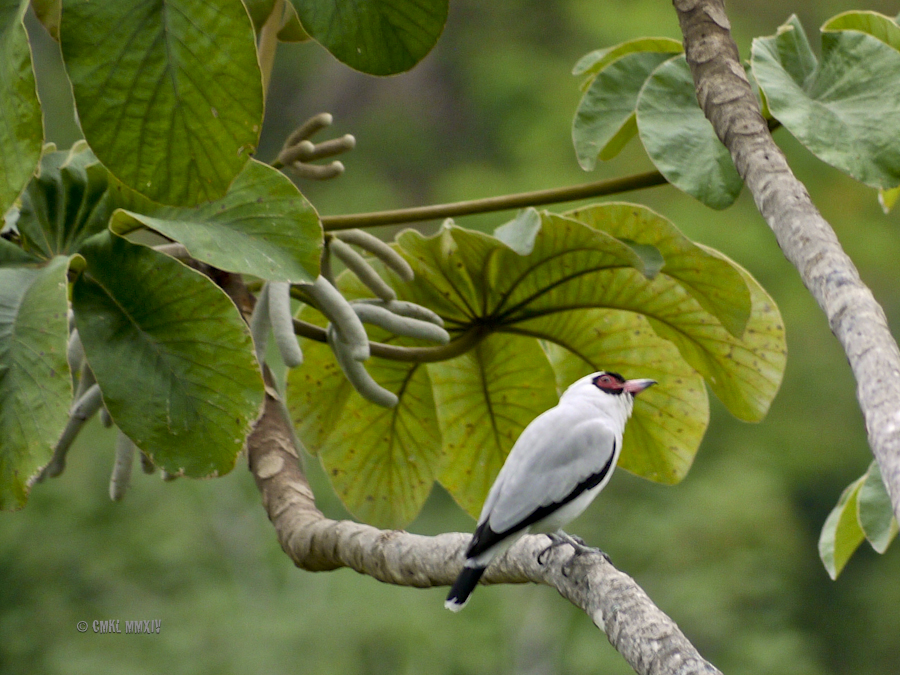 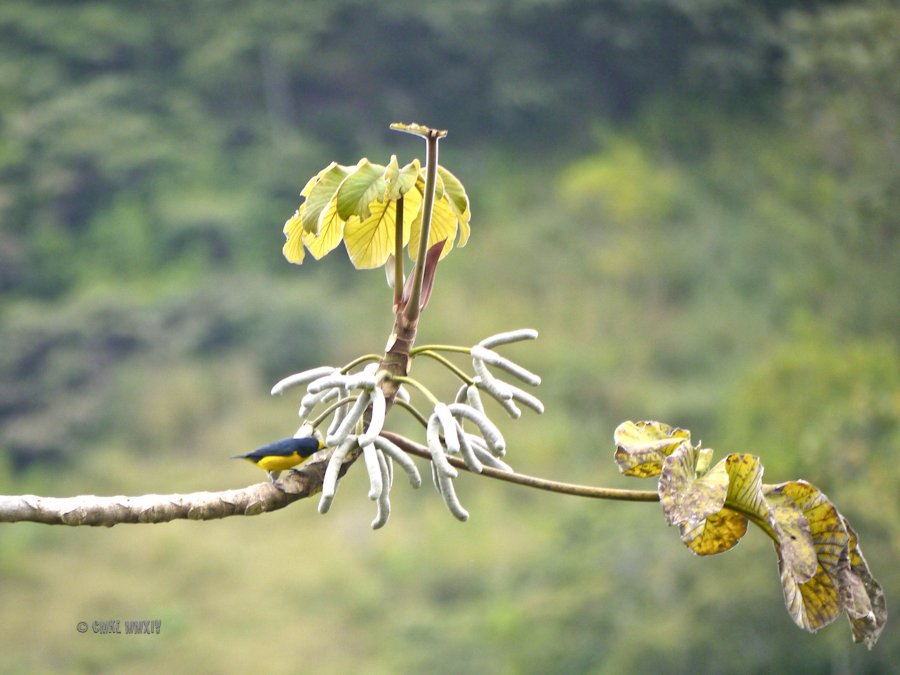 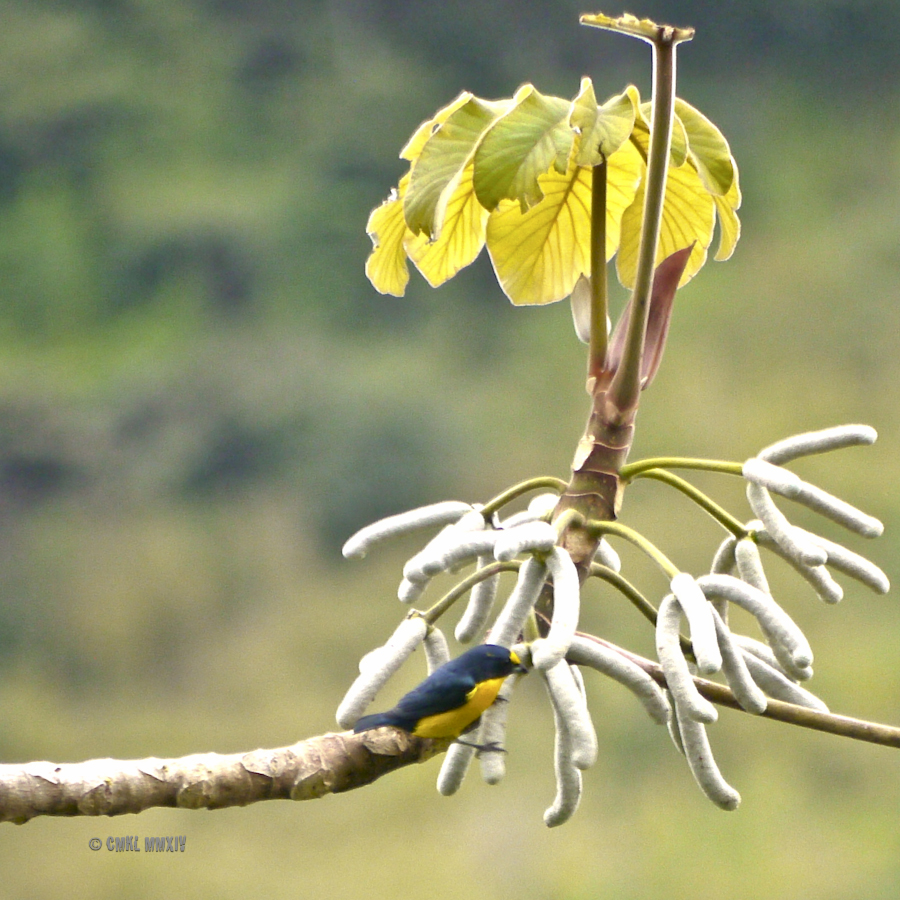 This female, either a Summer tanager or more likely, the highland version of the Hepatic tanager (Piranga lutea), seems rather tame compared to the gentlemen.

Not a new species, but you can always count on some clownery, while watching the pretty Blue-grey tanagers (Thraupis episcopus).

Speaking of comic relief – now we’ll finally get back to those catalnicas. Flocks of them fly in and out of the canyons around us all day long. You always know, when they’re practising another flyby, because they’re masters of multi-tasking. Flying while chirping or chirping while doing whatever else, is the norm with this bunch. So while we hear them all the time in the air, this was the only time they’ve landed in my guarumo, when I was lurking nearby. A precious going away present!

Soon after this bird attack we climbed into a really large bird and flew from San José to Newark to Geneva to Lisboa to Bordeaux. We hopped from Central America to Europe in small increments, thus drawing out the travel time to ease the jet lag adjustment of our circadian rhythm. Sounds goods, doesn’t it? Total bunkum, though. In actuality, we applied frequent flyer miles, to be able to fly first class for a very long, but fun trip. This circuitous route was the only way to do it, because the airlines will only ‘give away’ so many seats per flight. It’s indeed amazing, how comfortable air travel can be … if you have the bucks (or miles)!

Naturally autumn and winter in Europe doesn’t offer the same, colorful array of birds, as we see everyday in Costa Rica, but we did notice some birds, disregarding the ever-present pigeons, of course, on the Charente river during our first few days back. First of all,  last summer’s cygnets are all grown up and foraging happily on their own. I knew, you would like that! But another cattle of fish or gaggle of birds surprised me mightily.

There I was, looking out the bedroom window, lazily gazing about, when I noticed a rather large bird taking flight upriver. It didn’t seem duckish, nor heronish, but all in all it was a blur, just an impression of something different, as it gained altitude quickly and I lost sight of it. Two days later, I’m again looking out the window (I obviously need to schedule my days a little more stringently), when I noticed these loons swimming and diving down below. In my mind, I instantly called them loons (Gavia sp.), because those are the only black aquatic birds, with which I’m familiar. Like loons these birds lay very low in the water, so that only their skinny necks were visibly between dives.

I ran downstairs to my office and slapped the zoom lens on the camera, running back upstairs huffing and puffing to the front windows … yes, they were still there! Three birds were diving and drifting on the river, when one of them took flight and disappeared. The second one drifted below the bridge downriver and I lost sight of it, too. But number three stayed with me and allowed a more thorough investigation. During the zoom lens I noticed the hooked beak, suggesting a cormorant. Oh yeah, really, a cormorant. We’re roughly 50 klicks from the Atlantic shore, as the cormorant flies, so coastal birds aren’t exactly common or expected around here. Yet … Well, they were indeed a type of cormorant, typical for our southwestern Atlantic coast, as the yellow lore at the base of it’s beak confirms. Gold star, woman! I may not actually recognize many critters, but the old biologist’s instincts still come to the fore when needed. What we have here is a European shag (Phalacrocorax aristotelis), an all black version of a ‘sea raven’ (corvus marinus = cor+moran) as the birds were called until recently, as they were believed to be ravens of the sea. Or, possibly, the name goes back to the Cornish-celtic name of Kowr-Mor-An, the legendary Giant of the Sea. Take your pick!

Watching a mostly submerged bird turns fairly boring after a while, so I was soon tempted to abandon my post by the window, when I noticed a woman and her large dog walking down one of the old, stone boat ramps. As they approached the river’s edge, I had a hunch, that the cormorant wouldn’t feel comfortable this close to a potential predator and it might fly off, giving me change to snap it in flight. Sure enough, as soon as the big brute dipped its muzzle in the water, the shag started some rapid water walking and took flight.

It flew close to the water surface for just a few yards, then it engaged the landing gear. Those webbed feet make powerful brakes! 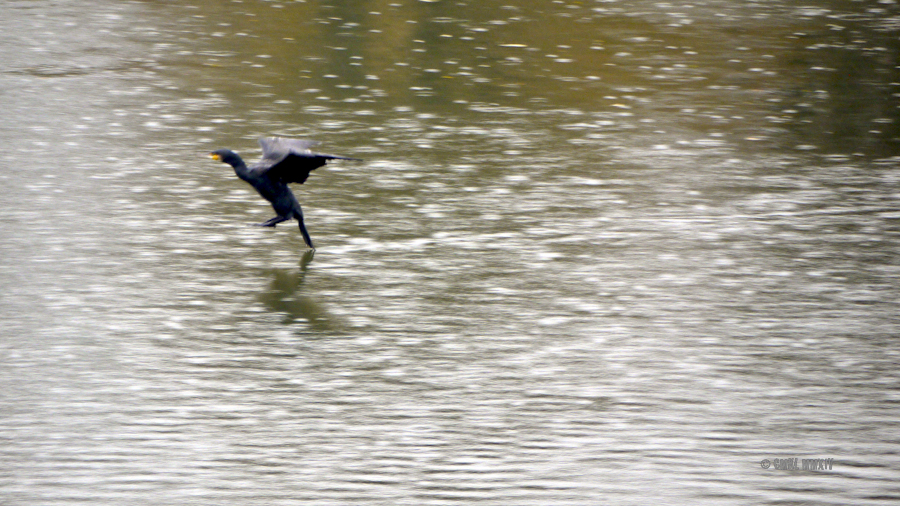 While the parakeets chirped their good-byes, the cormorant presented us with a surprise welcome! And so the circle closes … 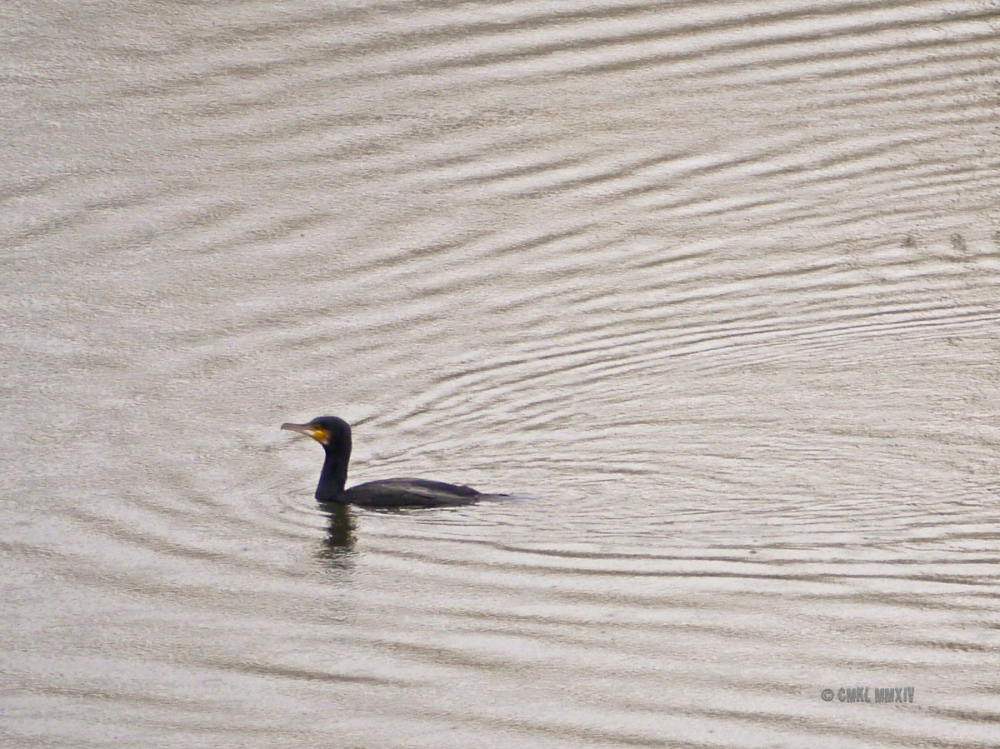