On the bright and sunny morning of New Year’s Eve, we walked over to the market to purchase the ingredients for a festive meal for New Year’s Day. Our butcher’s wife, Mme Besson, gave us the first hint, the first indication that New Year’s Eve in Saintes has more of a carnival atmosphere than Shrove Tuesday.

Afterward, as it was such a gorgeous winter day, my little exercise along the Quai de Verdun was pure delight. The local birds like this persimmon tree even more than I do.

Our plan was to eat out for New Year’s Eve. However not at one of the reservation-only hoity-toity celebratory restaurants in town, no, we wanted to pick up another set of the raclette sandwiches, our new acquaintance Bertrand at the Christmas Market prepares ever so deliciously. We had been looking forward to that treat for days! We should’ve communicated better with Bertrand, though. As we walked under the almost full moon toward the market, we realized that Germanicus’ Arch was guarding an entirely empty ice rink.

The Christmas Market and all associated entertainment was closed, dark and quiet. So much for raclette cheese melting over caramelized onion and smoky ham … As we walked on to regroup, we encountered a whole bunch of fools, reinforcing the carnival atmosphere I had encountered earlier at the market. But what kind of fool were these guys in their intriguing costumes and wooden shoes?

Since the troupe was dressed in such unusual outfits and seemed to practice or rehearse something, I took a quick, rather low light video, which will give you an impression of our sudden and unexpected foolish encounter. This baffling event drove us back under the protective Arch and into the only business actually open in these dark early evening hours, the ‘Bar de L’Arc de Triomphe’, where we fortified ourselves with a glass of hot wine. Truth be told, we wouldn’t have minded one of their croque monsieur sandwiches, but their kitchen was closed. I kept thinking about those fools we had just watched and the warming alcohol shifted several of my few remaining brain cells. I remembered that a friend said something about a band of Belgian fools. I googled it later and actually found the Gilles of the Carnaval of Binche, which is a town in Belgian and is the home of some quite famous jesters, even UNESCO heritage fame. Whodathunkit. In Saintes.

Finishing our wine, we decided to go home and just eat tomorrow’s food. We took the longer way home over the main bridge, because we had been told that there would be a parade. Palissy bridge was virtually deserted, yet something, some thing promised future excitement.

A couple of hours later the scene had changed considerably. 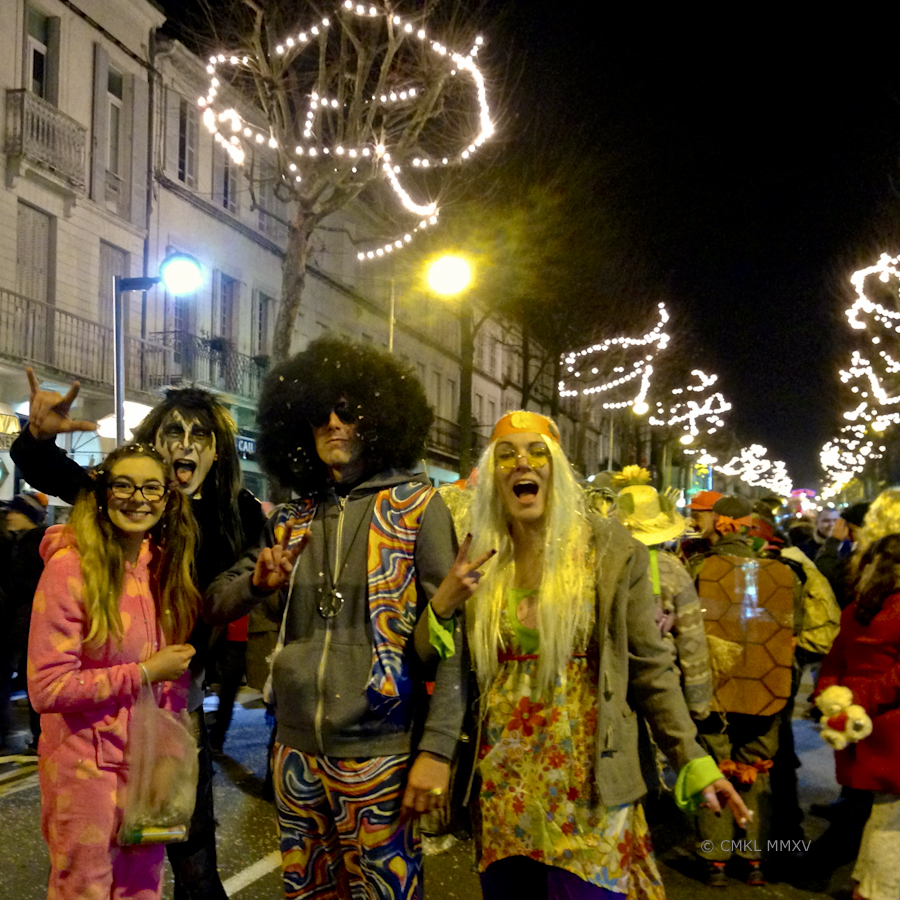 People crowded along the main drag in anticipation of the parade, we could just make out coming closer and closer …

… and as the noise level rose, and while shrill colors and flashing lights spun before your eyes, the great Carnaval Goddess herself rode toward us. Hear her sing surrounded by her fire dancers. The opening float of La Cavalcade de Saint-Sylvestre advanced. Mardi Gras had arrived, sans doute !

Second in line was the desert scorpion float celebrating the famed Dakar Rally.

These days the Dakar Rally doesn’t happen in Africa anymore but is taking place, as we speak, in the Andean highlands of Chile and Bolivia. In 2015, the 9000 Km race started in Buenos Aires, Argentina, where it will also conclude.

The next main float was soon approaching with its scary occupant.

Ever since I read Steven King’s novel ‘It’ – almost against my will, I have a certain aversion against smirking clown faces. 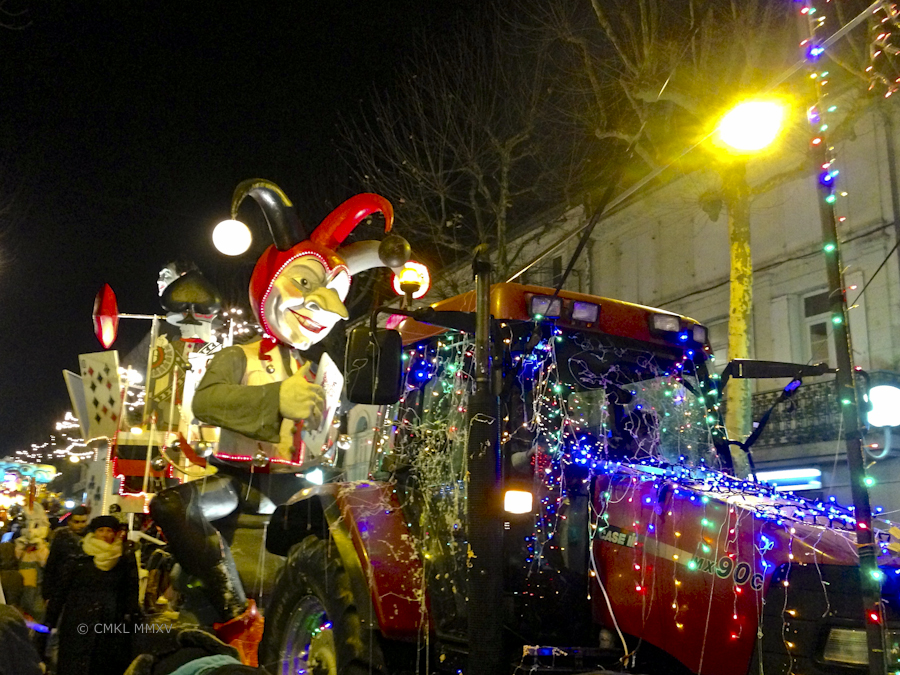 Fortunately, less intimidating characters followed suit. I don’t know, who the attractively styled muscular mystery man was supposed to be, but my vote goes to Vercingetorix.

And Blondi was followed be a musical act representing the very South of the country, the fabled Land of Oc. Ladies and Gentlemen, may I introduce La Fanfare des Goulamas, a jazzy band of creatures of the garrigue, headquartered in the Languedoc. Oh what fun!

This group of madly cavorting dancers with crepe paper canons was quite in your face, knocking off Barry’s glasses, which by some miracle weren’t smashed to bits. 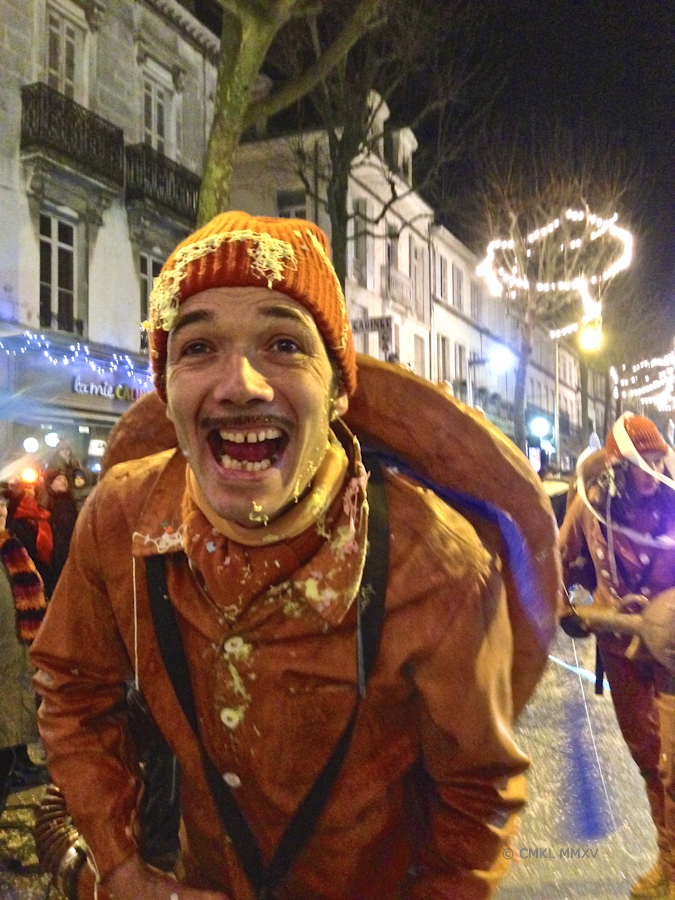 guys were less dangerous. Those two just claimed the view as they pleased, planting themselves right in front of spectators. I suppose, their fancy equipment trumped my iPhone.

But by then we were shuffling our feet anyway. Cold and damp was creeping deeper and deeper into our elderly bones and we agreed it was time to go home. Just a few more blinking fellows on stilts and one last wildly illuminated float. 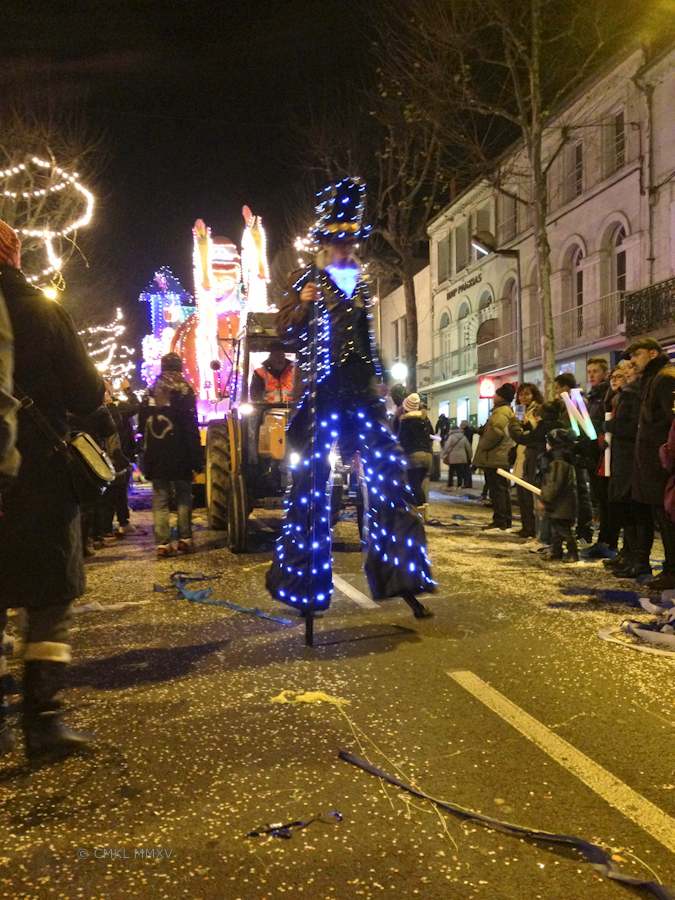 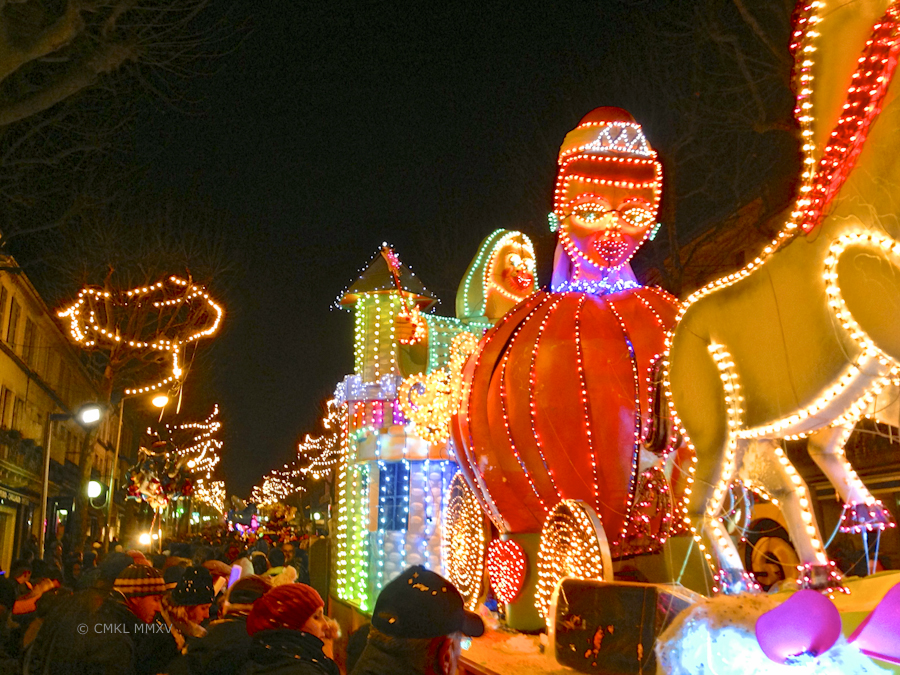 Since we live only two short blocks from the parade route, we had a pretty nice view from our veranda, as the floats made their slow way across Palissy bridge.