As we remember the terror attacks in Paris last week, we must open our hearts wider, much wider to include the victims of an almost simultaneous attack by the Al-Qaida affiliated terror organization Boko Haram in Nigeria. After their latest massacre in Baga, we know the terrorists will not stop in their drive to destroy humanity and our basic human rights, don’t we? So with the promise to never forget, we must hold up two signs.

“One must not confuse extremists with Muslims. Mad people have neither color nor religion.” 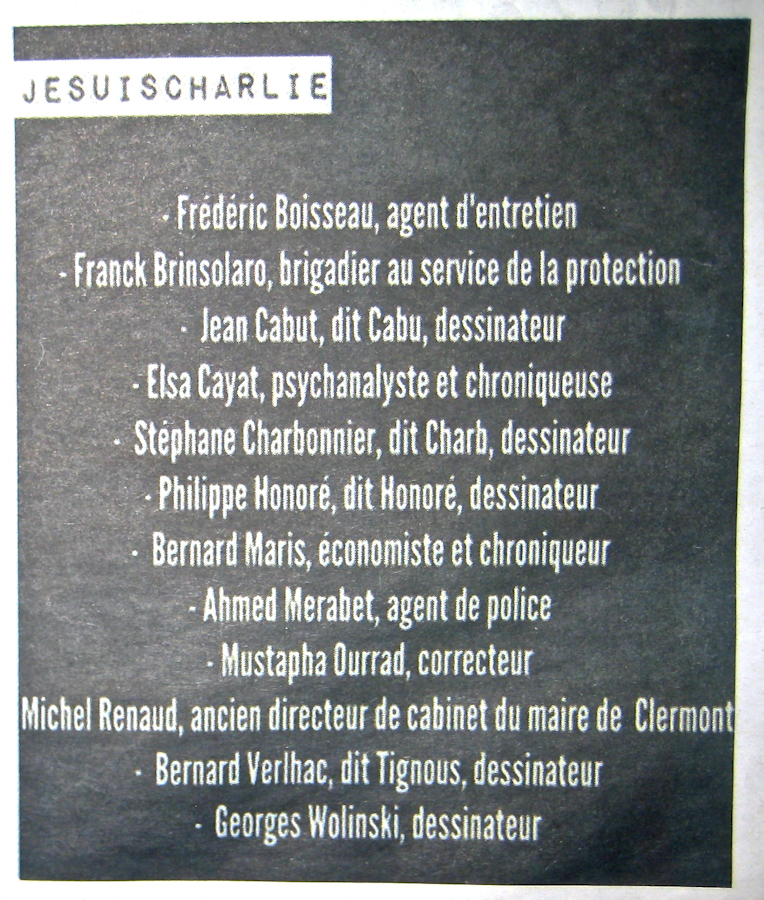 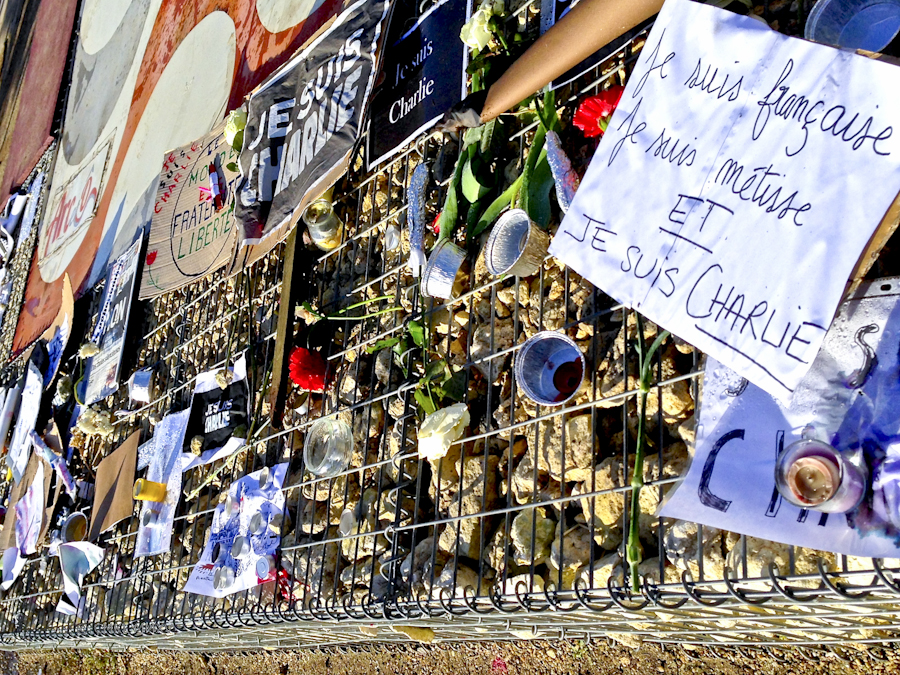 Have you, like me, wondered about the name ‘Charlie Hebdo’? Hebdo is simply short for hebdomadaire, weekly, based on the Greek word for seven, hepta, as opposed to a monthly journal, a ‘mensuel’, which borrows from the Latin, as female readers know only too well. And ‘Charlie’, you ask, is that also taken from antiquity? Not quite, even though the tradition of satire is part of history itself.

In 1960, a new monthly magazine named Hara-Kiri began publishing political satire for the next quarter century or so. It spawned another satirical magazine, which appeared every other week to be able to address current political issues in a more timely and direct fashion. It was called Hara-Kiri Hebdo after its parent, but it got itself into deep trouble straight out of the starting gate, by mocking His Majesty Le Général de Gaulle after his death in 1970. Immediately Hara-Kiri Hebdo received a crippling interdict. Henceforth, for the protection of minors, it was no longer allowed to sell the irreverent pages on newsstands. A week later, Charlie Hebdo made its first appearance on the satirical horizon of political publications. According to Wolinski, Charlie refers to de Gaulle.

The post-WWII period, with the Indochina War and the Algerian War of Independence, followed by the social unrest of ’68, produced many big names in French journalism and the arts, who evolved into satirists and in turn inspired their younger colleagues. Men like Georges Bernier, Maurice Siné, Georges David Wolinski, Jean-Marc Reiser, François Cavanna, Fred Aristidès, Jean-Jacques Loup, Roland Topor, Gébé Blondeaux, Jean Cabut and so many more. These men didn’t make ‘becoming offensive’ their career goal, nor does satire exist for the purpose of hurting and upsetting the general public. These creative minds were and still are translating their own life experiences and all they observe in our society into fingerposts of conscience. Some of them use extreme images to do so. Most of the founders and editors-in-chief of those offending magazines have come through the ranks of mainstream publications, realizing that only by turning their pens into fierce instruments of ridicule, only by skirting the finest line allowed by law, will they be able to rattle the cages of our complacency. The main themes of 20th-century satire have focused on anti-colonialism, anti-clericalism, and anti-capitalism, with a bit of anarchy thrown in for good measure. But in recent years another theme became the predominant feature in French political satire: Laïcité (secularism). Many French consider the laws and practices of a strict separation of State & Church a fundamental right and most important part of the constitution. Charlie Hebdo considers it essential.

I’m not French, but in my own country, political satire and political caricature have been alive and well for ages too. I grew up reading much milder satire and, admittedly, I do cringe and avert my eyes at many hardcore images shown by some artists, including a number of those published by Charlie Hebdo. However, that is my problem, not theirs. Satire isn’t about sensibilities, it’s about vigorously wagging crayons at wrongdoing at every level and against any institution. Especially all those institutions, which we have been indoctrinated to respect simply because their members comport themselves with great importance or even claim divine rights. Those leaders of finance, commerce, government, and the world’s religions with clay feet, who expected respect, even deference are exposed without mercy. This sort of outrageous behavior doesn’t make you popular. It doesn’t gain you respect either, but satirists revel in being despised, which proves their point of being suspicious of respect and adoration extended to anyone in a position of power over others.

Yesterday I came across two editorials written in reflection of the terrorist attacks in Paris. One article, The Charlie Hebdo I Know, written by Scott Sayare, was published in The Atlantic. It brings forth, among other important points, the interesting view that the Charlie Hebdo guys would have been aghast at its current approval rating. The other article made me mad though. In his NYT editorial titled I Am Not Charlie Hebdo, David Brook assigns certain members of the political media places at either a table for ‘adults’ or for ‘kids’. In his mature wisdom, Mr. Brook puts jesters and “other holy fools”, who stick “a finger in the eye of authority” at the kid’s table, while he himself converses with grown-ups, who read Le Monde and other serious publications. In an earlier paragraph, he writes that satirists “puncture the self-puffery of the successful”. Well David, stick a finger in your own eye, will you! I can’t believe his arrogance and stupidity of dismissing satire as mere adolescent hilarity after his colleagues have just been murdered for his, and everyone’s, freedom of speech.

In Saintes people spontaneously congregated in silence on the main bridge on Wednesday evening, lighting candles, followed by several quiet demonstrations of solidarity and grief over the next couple of days. On Sunday, people started as early as 9 AM to walk toward Place Bassompierre, our usual site for gatherings. 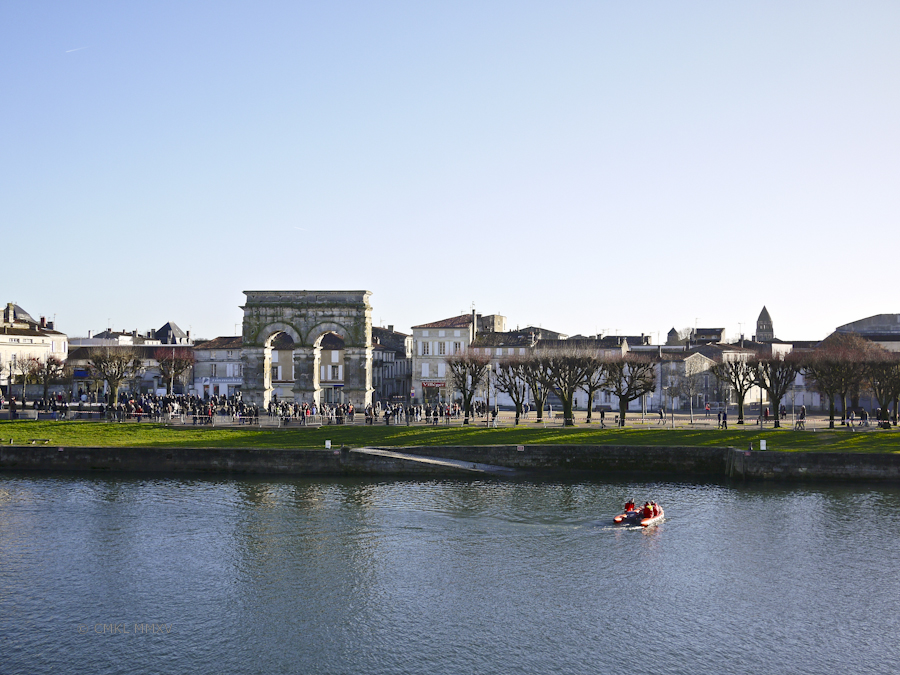 Firefighter units patrolled the river, while people congregated in a quiet and orderly fashion. I have no idea how many joined the assembly for unity here in Saintes, but it was quite a crowd, standing respectfully to honor the memory of the slain. 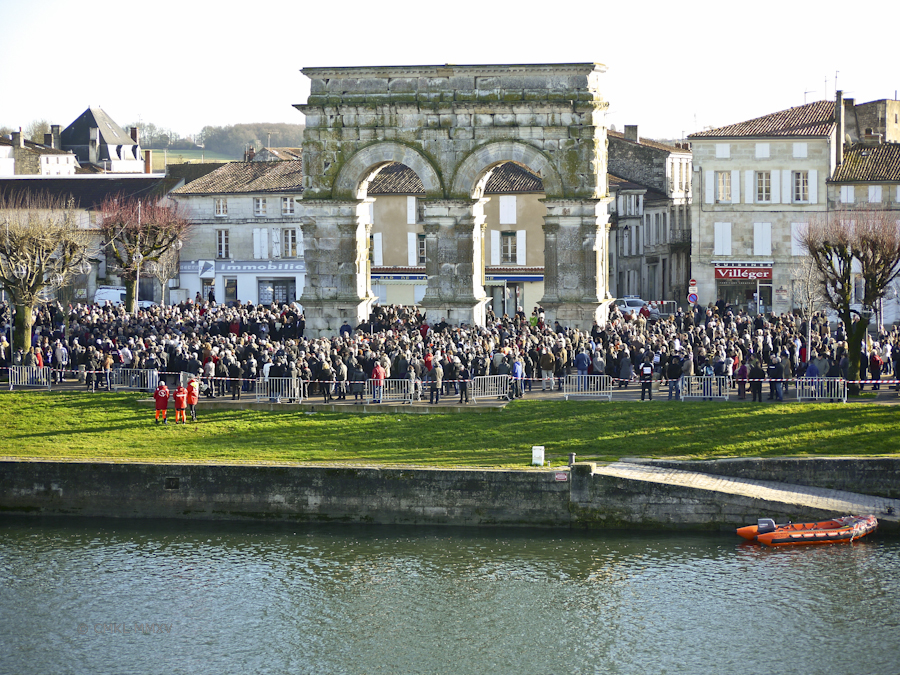 Another assembly took place later in the afternoon, equally quiet and peaceful. 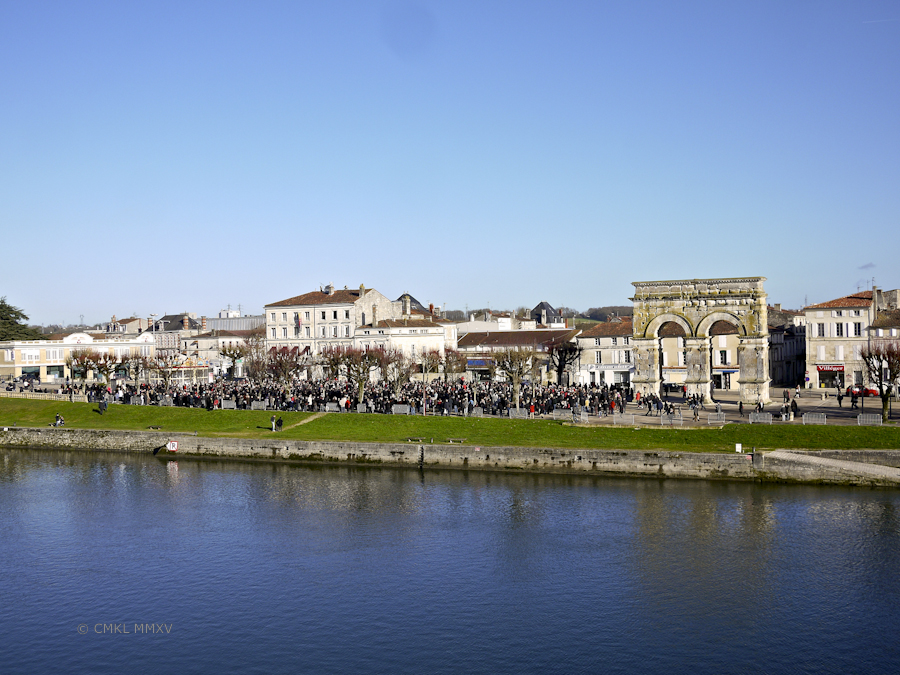 I tried to buy the new edition of Charlie Hebdo today, but it hasn’t quite reached the provinces yet. I’ll try again tomorrow. 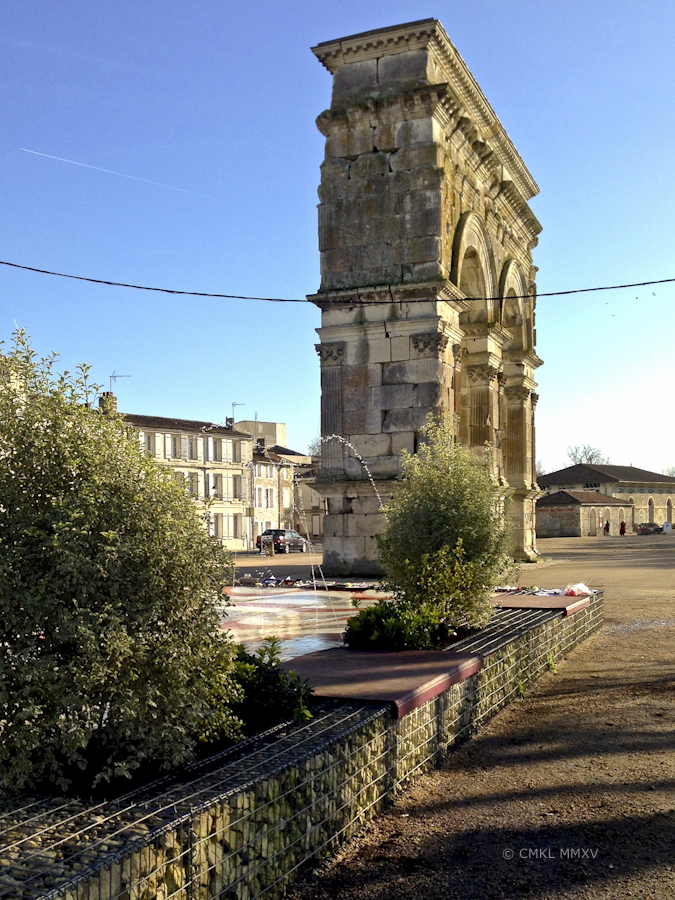